Our picks for the top events in the region. 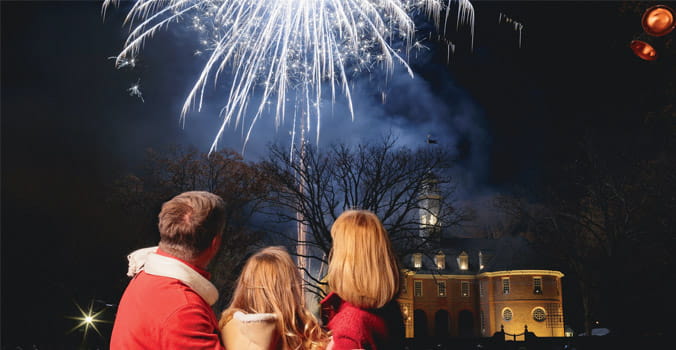 The Case of the Cape May Weekend
November 3–5
Stalk the gaslit streets of Cape May, New Jersey, with Sherlock Holmes and Dr. Watson as you hunt down evidence of a crime during Sherlock Holmes Weekend. Can you solve the mystery of the Case of the Discarded Woman? Can you remember where you put your deerstalker cap and meerschaum pipe? Join the whole whodunit weekend, or just participate in the Search for Clues Tour. capemaymac.org

A Fair Share of Fun
November 4
Be swept back to the 1700s on The Green in Dover, Delaware, at the First State Heritage Park’s 18th Century Market Fair. Based on autumn market fairs of the past, the fair offers living-history reenactors demonstrating glass making, woodworking, blacksmithing and more while entertainers provide 18th-century style music and dance. VisitDelawareVillages.com

It’s Madness, I Tell You!
November 4
Cherry Crest Adventure Farm in Ronks, Pennsylvania, unleashes the silliness at its annual Pumpkin Madness Festival, and those poor leftover pumpkins won’t stand a chance. Try your hand at pumpkin smashing, pumpkin putt-putt, pumpkin shotput and pumpkin bowling. You can even play reverse pumpkin darts during which you hurl a pumpkin at a wall of darts. There’s fun for the whole family at this Lancaster County event—well, except for the pumpkins. cherrycrestfarm.com

How Do You Like Those Apples?
November 4–5
It’s apple season in Bucks County, Pennsylvania, and that means it’s time for the Apple Festival at Peddler’s Village in Lahaska. We’re talking apple butter, apple cider, apple dumplings, apple fritters, caramel-dipped apples and apple pie-eating contests. In addition, there will be an Artisan Market with more than 60 juried artisans, live entertainment and apples—did we mention apples? peddlersvillage.com

One and Only Art
November 9-12
One-of-a kind museum-quality pieces created by 195 contemporary craft artists from 34 states will be the focus of The Philadelphia Museum of Art Craft Show at the Pennsylvania Convention Center. Crafts available to purchase (or just ogle) include glass, baskets, jewelry, wearable and decorative fiber, metal, paper, leather, furniture, ceramic, wood and mixed media. pmacraftshow.org

For Old Times’ Sake
November 10–12
If you are looking for the best of American antiques and decorative arts, including furniture, paintings, rugs, ceramics, silver and jewelry, look no further than Winterthur’s 54th Annual Delaware Antiques Show. Held at the Chase Center on Wilmington, Delaware’s riverfront, the show presents an exhibit celebrating the 25th anniversary of the Biggs Museum of American Art and a keynote lecture by award-winning architect and author Gil Schafer III. winterthur.org/das 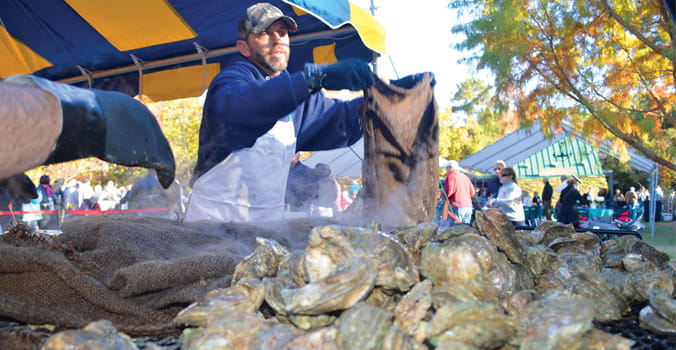 All-You-Can-Slurp
November 11
Enjoy all-you-can-eat Rappahannock oysters at the Virginia Living Museum's annual Oyster Roast. You can also partake of delicious chowder, fried seafood and a dessert bar. This year, thanks to the St. George Brewing Company, you’ll be able to wash them down with an exclusive Oyster Stout. This Newport News event always sells out; visit the website for ticket information. thevlm.org/events/museum-events/oyster-roast

Picture This
November 11–19
FotoWeekDC celebrates photography in all genres, from photojournalism to fine art. Venues throughout Washington, D.C., will be the scene of more than 150 exhibitions, clinics, classes, seminars, portfolio reviews and parties.fotodc.org 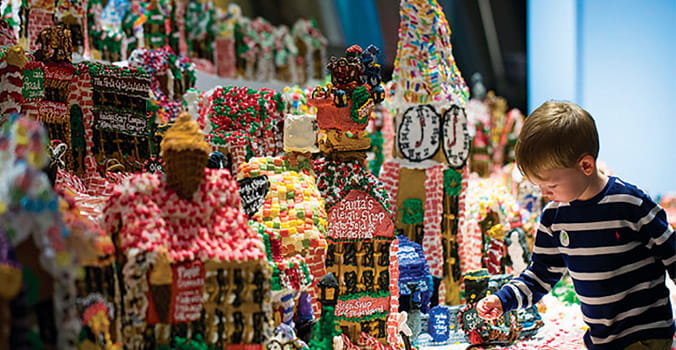 It Takes a Gingerbread Village
November 11–January 7, 2018
Guinness World Record-holder Jon Lovitch will attempt to beat his own record by creating a 678-square-foot gingerbread village at the Maryland Science Center in Baltimore’s Inner Harbor. Lovitch estimates that it will take a combined 759 hours to bake the village—made from 270 pounds of gingerbread dough; 910 pounds of icing; 700 candy canes; and 25 combined pounds of ginger, cinnamon and nutmeg—and then assemble it at the Maryland Science Center. marylandsciencecenter.org

A Yule of Yore at the Shore
November 17–January 1, 2018
It’s one of our favorite places to visit anytime of the year, but Cape May’s Holiday Season is especially chock full of fun. Check out the Christmas in Cape May Preview Weekend (November 17–19), Candlelight House Tours (December 2, 9 and 16), A Dickens Christmas Extravaganza (December 3–5), Ghosts of Christmas Past Trolley Rides, Evening Holiday Lights Trolley Rides (all season) and so much more. capemaymac.org

Crying Fowl
November 23–26
This Thanksgiving, give thanks for the awesome natural world that surrounds us at the Chincoteague National Wildlife Refuge Waterfowl Weekend. Thousands of snow geese, ducks and swans visit the refuge, as do binoculared bipeds, birders and other humans. This is the only time each year that the public can take a special drive along the refuge’s seven-mile Service Road. That’s definitely a treat that will leave you thankful. fws.gov/nwrs/threecolumn.aspx?id=2147582946

Longing for Longwood
November 23–January 7, 2018
If your garden lies fallow and bare, fear not. Longwood Gardens in Kennett Square, Pennsylvania, has more than 6,000 seasonal plants just waiting to chase your winter blues away. During A Longwood Christmas, not only will the holiday horticulture bring cheer but also Longwood’s famous fountains will dance and more than a half-million lights will twinkle to make your season bright. Timed admission tickets are required. longwoodgardens.org

A du Pont Home for the Holidays
November 24—January 1
During its Holidays at Hagley, Eleutherian Mills, the 1803 du Pont family ancestral home features holiday decorations with a focus on the French traditions of holiday entertaining and the celebration of Twelfth Night. Hagley Museum and Library and Eleutherian Mills are located along the banks of the Brandywine River in Wilmington, Delaware. hagley.org

It’s a Zoo at Holiday Time
November 24–January 1, 2018 (except December 24, 25 and 31)
Stroll the grounds of The Smithsonian’s National Zoo amid more than 500,000 environmentally friendly LED lights, live music performances and seasonal treats during its annual ZooLights free holiday event. Hop aboard the National Zoo Choo-Choo for a ride around the Great Cats exhibit, or try your hand at Snow-Less Tubing. nationalzoo.si.edu/events/zoolights

A Very Merry Mount Vernon
November 24–January 6, 2018
Join the first First Family—George and Martha Washington—at their Mount Vernon, Virginia, home for the holidays. Christmas at Mount Vernon festivities include chocolate-making demonstrations, character-guided candlelit tours of the mansion and Aladdin the Camel. A highlight of the season will be Christmas Illuminations at Mount Vernon, fireworks overlooking the Potomac River on December 15 and 16. mountvernon.org 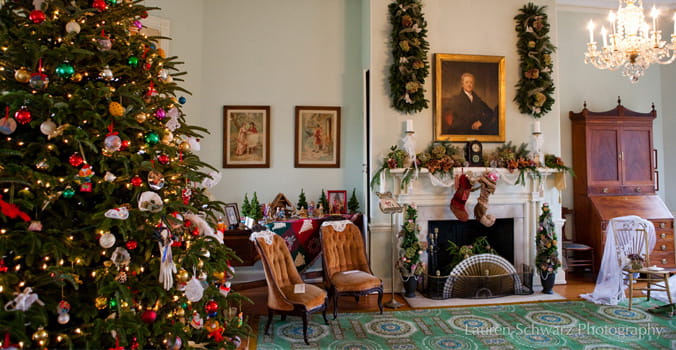 Yo, Christmas!
Throughout December
Every year, several of the Historic Houses of Fairmount Park get dressed up to celebrate the holidays and open their doors to visitors for tours. This year’s theme for five of the 18th- and early 19th-century mansions is A Very Philly Christmas. There will be special programing on December 2 (Sounds of the Season), December 3 (Family Day), December 9 (Neighbor’s Day) and December 10 (Flavors of the Season). holidaysinthepark.com 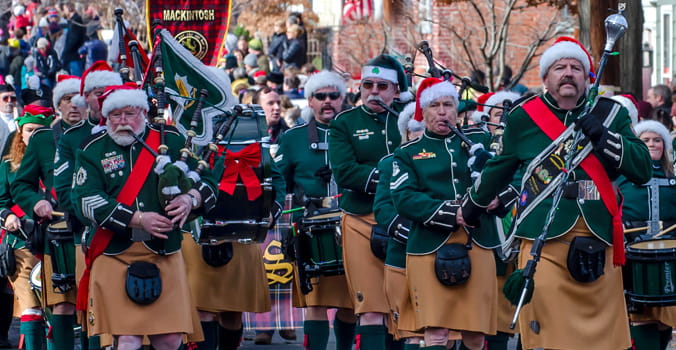 A Kilt Trip
December 1-2
Alexandria, Virginia, celebrates its Scottish heritage with its annual Scottish Christmas Walk Parade, featuring dozens of Scottish clans dressed in colorful tartans parading through the streets of Old Town Alexandria, joined by pipe-and- drum bands from around the region, as well as terriers and hounds. The weekend kicks off the night before with the Taste of Scotland scotch tasting. Other events on Saturday include a holiday Heather and Greens Sale and The Campagna Center’s Holiday Designer Tour of Homes. campagnacenter.org/scottishwalkweekend

Studio Time
December 2–3
Get a glimpse behind the scenes at local ceramics and pottery studios during The Shenandoah County Artisan Trail 2017 Holiday Open Studio Tour. Each of the four studios—located in Toms Brook, Woodstock, Edinburg and New Market—are within easy driving distance of each other, and the atmosphere will be welcoming as the artists give tours of their working spaces and talk about the inspiration for their work. Refreshments such as warm cider, tea and sweets will be served, and you’ll have the opportunity to purchase local and handcrafted gifts that are truly unique.vastudiotour.wixsite.com/holidaystudiotour 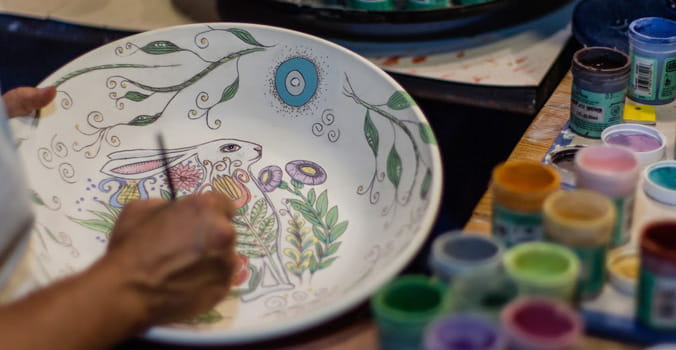 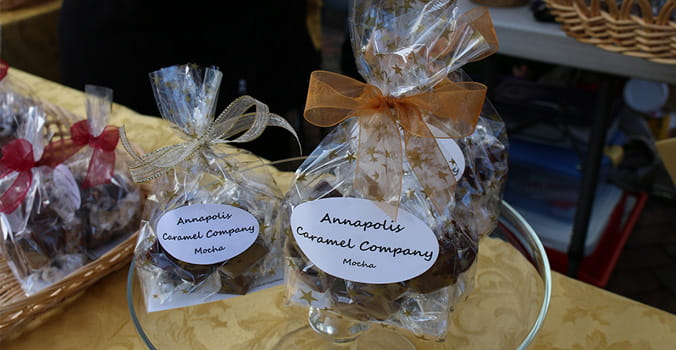 Very Illuminating
December 3
During the 1700s, major events were celebrated with pyrotechnics—firing cannons, lighting fireworks—a practice known as “illuminations.” These days, the cannon blast is the cue to light candles throughout Williamsburg, Virginia. The Colonial Williamsburg Grand Illumination still includes spectacular fireworks from the Capitol, Magazine and the Governor’s Palace, along with carolers and fife-and-drum performances. visitwilliamsburg.com

Foodie heaven on earth. That’s the only way to describe the MetroCooking DC show, returning to the Walter E. Washington Convention Center in Washington, D.C. From cooking demos and a pop-up cooking school to samplings from more than 50 local restaurants and hundreds of specialty food vendors, this two-day event will help you prepare to master any holiday party. metrocookingdc.com

The festival of Chanukah—The Festival of Lights—will be celebrated in Washington, D.C., on the Ellipse across from the White House as the National Chanukah Menorah Lighting Ceremony takes place every night throughout the holiday. The first night will feature songs and an appearance by Dreidelman. nationalmenorah.org

These events originally appeared in the November/December 2017 issue of AAA World. 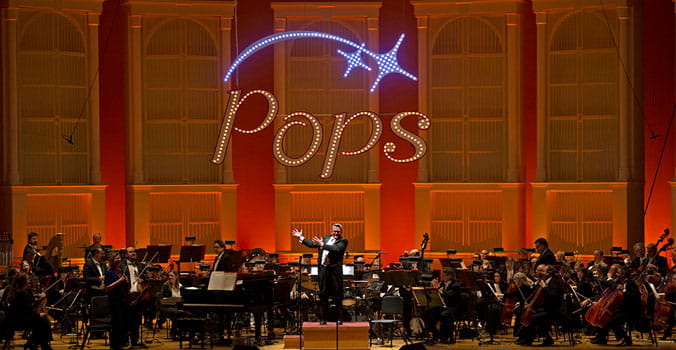 Germania Christkindlmarkt, Saengerfest, North Pole Express and more holiday fun. Get out there and have some fun with our picks for the top events throughout Cincinnati and Kentucky. 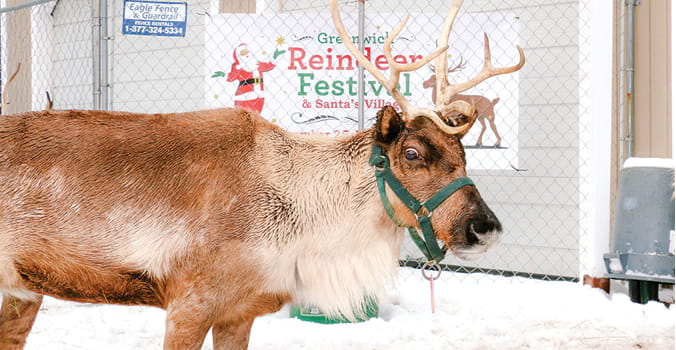 Reindeer, ghosts, Santa and more are on the list this time around. Get out there and have some fun with our picks for the top events in the region. 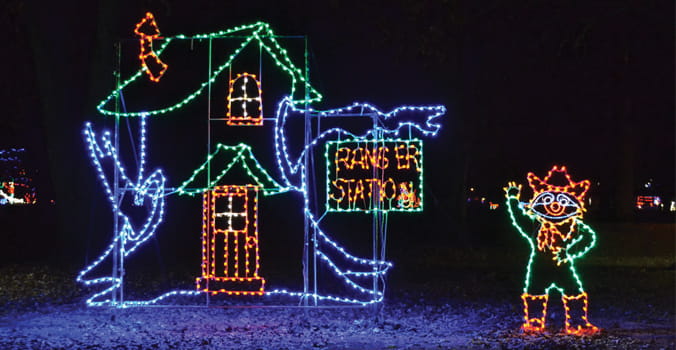 A Snowflake parade, Christmas lights, Frostfest and more are on the list this time around. Get out there and have some fun with our picks for the top events in the region.