Inventive bartenders convey the flavor of a destination in a glass 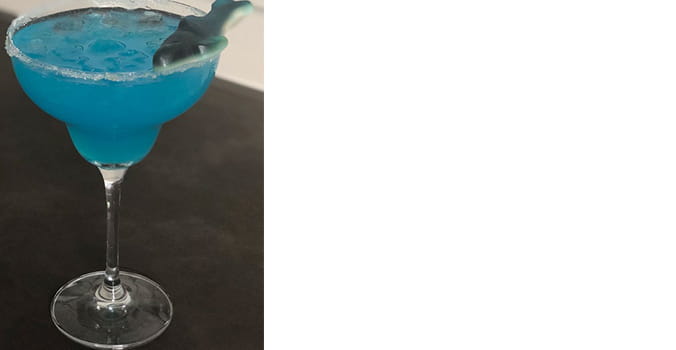 Courtesy of Four Seasons Hotel Austin
Blue Shark Margarita
Austin, Texas
The flavors of Mexico have strongly influenced the cuisine in Austin, Texas, and the margarita is a popular drink around town. Guests at Four Seasons Hotel Austin can just press the “Margarita” button on the in-room phone to summon a bartender wheeling a cart stocked with ingredients to make any of more than 500 margarita combinations, including the Blue Shark. This fun, ocean-colored take on the classic, which is the booziest margarita on the menu, definitely has a little bite! 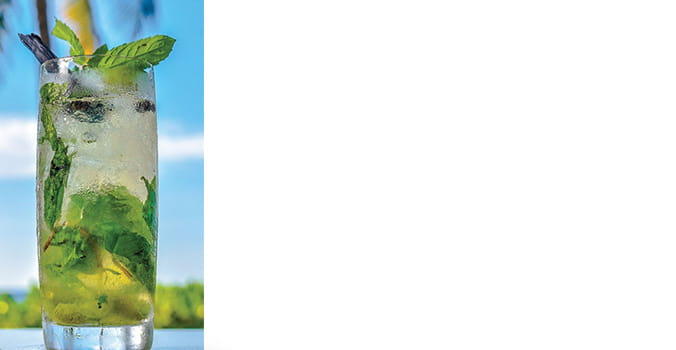 The pimento tree is indigenous to the Caribbean islands and was later discovered in Cuba and Mexico. It was first identified in Jamaica in 1509 by Spanish explorers, who were immediately taken with the aroma of its leaves and the flavor of its berries (which most English-speaking people know as allspice). From the Hyatt Ziva and Hyatt Zilara Rose Hall in Montego Bay comes this Jamaican spin on the traditional Cuban highball. 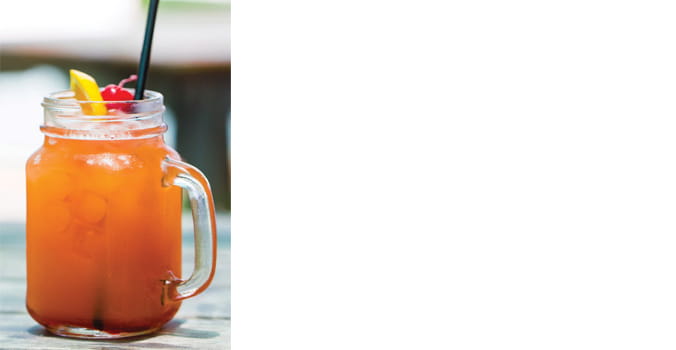 Created in 1963 at what is now the Hilton Aruba Caribbean Resort & Casino, the Aruba Ariba has become synonymous with this island in the southwestern Caribbean. The fruity concoction consists of coecoei, vodka, rum, creme de banana, a splash of grenadine, and fruit juice poured over ice and then topped with a bit of Grand Marnier. Coecoei is a liquor made from the sap of local agave plants, and while you can find it at most liquor stores on the island, you’ll need to bring a bottle back home with you as it’s not available outside Aruba. 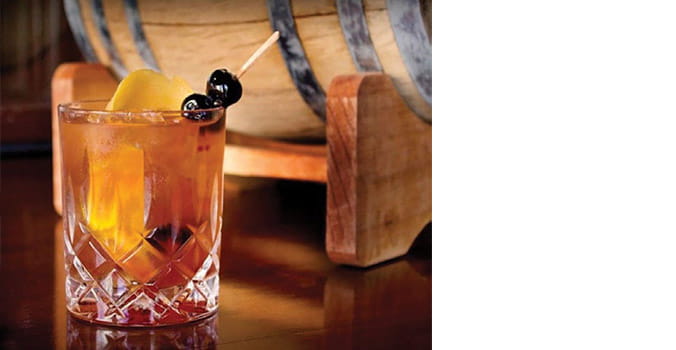 Adam McCraith, beverage manager at the Hilton Lexington Downtown, brings us this Old West-themed variation on the Old Fashioned. It’s bourbon-based, as befits a Kentucky libation, and enhanced with brown sugar syrup, sassafras and sorghum bitters, Grand Marnier, and cherries aged in brandy and root beer. The Lexington Hilton ages the mixture for a month in an American white oak keg, but McCraith gave us an at-home recipe that will be ready to sip in two to three hours. 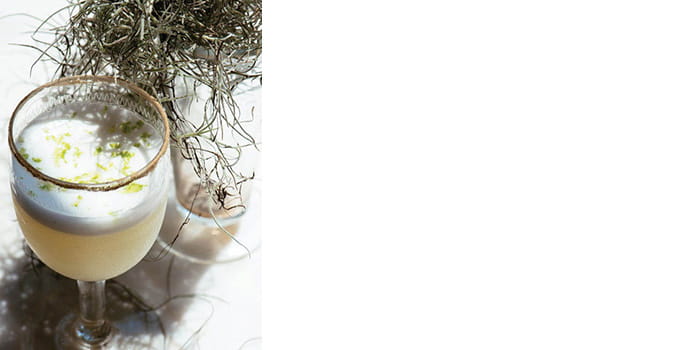 Named for the pirate and bootlegger who operated in New Orleans in the early 19th century, the Jean Lafitte can be found at Loa Bar in the boutique International House Hotel downtown. Make a toast to NOLA’s 300th anniversary with a cocktail intended to represent the city’s cocktail culture, Caribbean influence, and rebellious attitude. The Jean Lafitte is made with rum, pisco, powdered lime, fennel, and Spanish moss foraged from City Park, a 1,300-acre urban park established in 1854.

Steep the moss in water over until it’s heavily concentrated. Then put it in a pot with sugar and reduce slowly until the liquid has the consistency of syrup.

For powdered dried lime and fennel:

Combine ingredients in an espresso grinder and use the powdered result to rim the glass.

Shake rum, pisco and moss syrup together and serve in a glass rimmed with powdered dried lime and fennel. 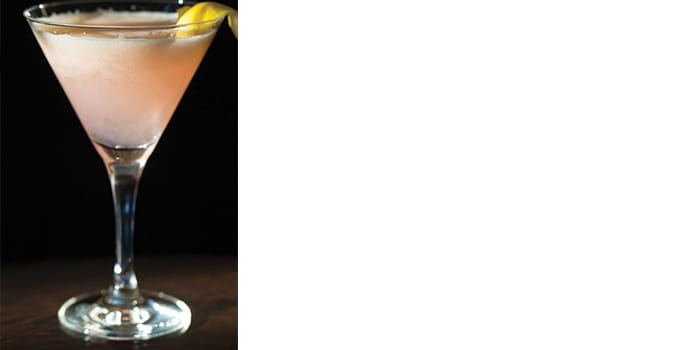 Courtesy of The Bellevue Hotel Philadelphia

The Clover Club, a gin-based cocktail made with lemon juice, raspberry syrup, and egg white, was invented in Philadelphia in the late 1800s as the signature drink for The Clover Club, a gentleman’s group “dedicated to the accompaniment of wit and eloquence and song.” By 1904, the club was meeting at the ornate Philadelphia hotel known as “The Grand Dame of Broad Street.” The historic lodging that is today The Bellevue Hotel still serves up the famous cocktail at its XIX (Nineteen) restaurant and bar. 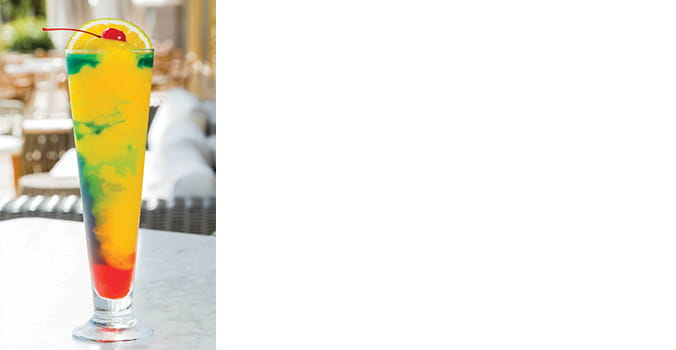 Island Vibes
Port-of-Spain, Trinidad
A specialty of the Hyatt Regency Trinidad, the Island Vibes cocktail is as jubilant and colorful as the Caribbean island sometimes referred to as “Rainbow Island” for its rich diversity. Bartenders at the Hyatt Regency make the drink using Angostura single-barrel rum, but you can substitute Angostura’s widely distributed five-year rum. The other ingredients—Blue Curaçao liqueur, mango concentrate, and grenadine—add to the festive color and flavor. 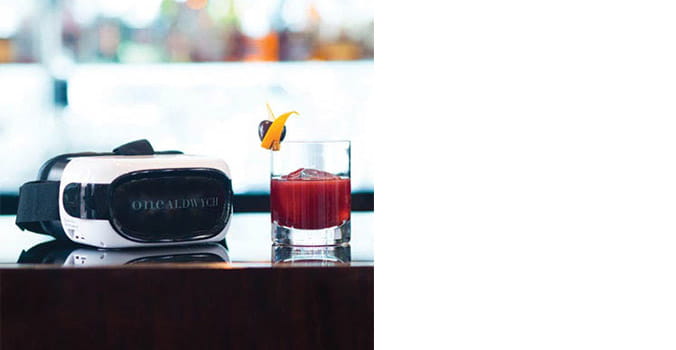 Courtesy of One Aldwych Hotel

The Origin
London, England
The Origin might just be the first of its kind: a virtual-reality cocktail experience. Served at the Lobby Bar at One Aldwych, a luxury contemporary hotel in London’s Covent Garden district, The Origin is a whisky drink that’s preceded by a two-minute multisensory experience. The customer dons a virtual-reality headset to journey via 3D aerial footage from the Scottish Highlands where the whisky was created, sweeping through Covent Garden and ending up at the Lobby Bar, where the bartender serves the drink at the precise moment when the video finishes.