GOING AWAY WITH AWAY LUGGAGE

Putting the Sleek New Luggage Brand to the Test 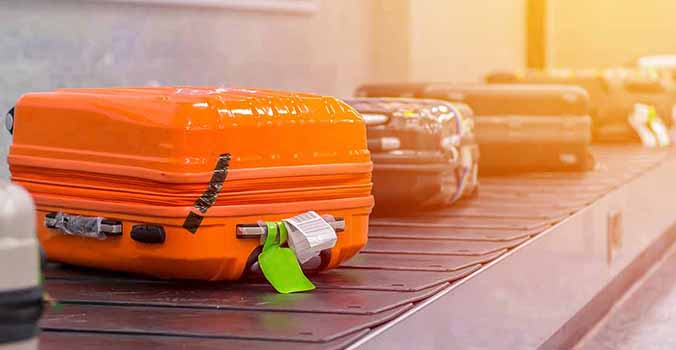 You’ve probably seen them making a big splash on your Instagram feed, or maybe you’ve seen them coming around the corner on the baggage carousel. Away has become the trendy new luggage thanks to their slick social media campaigns promoting their unbreakable polycarbonate shell and ejectable batteries on specific models. But is Away luggage any better than the rest? We put it to the test.

Available from a handful of Away stores or AwayTravel.com, we purchased "The Bigger Carry-On" with ejectable battery ($245), and “The Medium” ($275) for our test.

The Bigger Carry-On comes in about ten different colors. We purchased a very neutral navy, but colors ranging from sky blue to a blush pink are available. We also included the ejectable battery option, which is compliant with TSA regulations. The bag weighs 7.8 pounds and is a 22-inch carry-on with 360-degree wheels and a TSA-approved combination lock.

The Medium also comes in about ten different colors and features the same unbreakable polycarbonate shell, TSA-approved lock, and 360-degree wheels. The bag, which we purchased in asphalt gray, comes in at 9.6 pounds and is 26-inches tall.

HOW WE TESTED THEM

We took both bags on a flight from Cincinnati to Washington D.C. that featured a layover in Detroit. The Bigger Carry-On we carried on the plane, while The Medium was checked.

Starting with the Bigger Carry-On, packing was a breeze. The bag’s interior is well organized and is at the larger end of the carry-on spectrum. The 360-degree wheels provided a smooth and easy ride through airport terminals and parking garages. At the gate, we did have to remove the battery per TSA regulations. While this isn't a huge deal, it may be easier for some to carry a portable power pack in their purse or briefcase. For reference, you can purchase Away carry-ons without the battery. While on most larger planes this bag will fit in the overhead bin, on smaller regional jets the bag will have to be valeted due to its size, which we experienced on our CRJ-700 flight from Cincinnati to Detroit.

The Medium was a bit more challenging to pack. While the bag is organized nicely and features a hidden laundry bag and a nice zipper section, it’s a bit narrower in terms of depth than many of its counterparts, and doesn’t offer any expansion or give. That said, the shell held up well – the minor scuffs were easily removable with a Mr. Clean Magic Eraser or a soft, damp cloth and soap.

Away luggage holds up with the competition, but at a hefty price tag. The shell is the most significant selling point—it can handle being tossed around by baggage handlers and barely gets bruised. But be sure to compare an Away bag to another brand to make sure it's what you want—you may find you need other features, like an expander, to be fully satisfied. Thanks to Away’s 100-day trial, returning luggage is a breeze if it doesn’t meet your needs, so don’t hesitate to give it a go.