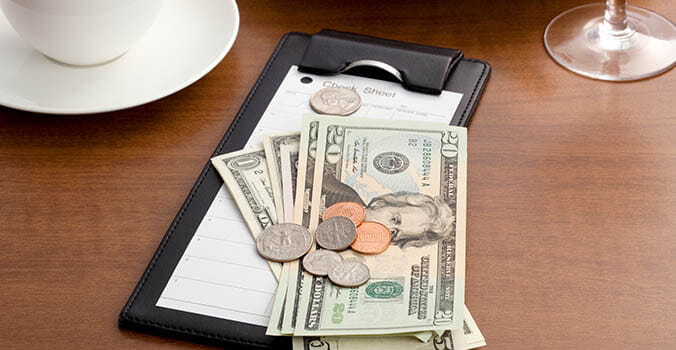 Millennials often get the blame for ruining a lot of things—the economy, marriage, the housing market, restaurant chains, and even the napkin and pajama industries.

According to a new 2018 survey by CreditCards.com, young adults ages 18 – 37 are also less likely to tip their servers at restaurants than their older counterparts.

In fact, 10% of Americans ages 18 – 37 say they routinely leave no tip, and 1 in 3 leave less than a 15% tip for their servers. When presented with a variety of tipping options, such as at a coffee shop or after taking an Uber, 1 in 6 millennials say they choose the lowest option, and 1 in 5 give no tip.

WHY THE CHANGE IN TIPPING TRENDS?
The survey results don’t necessarily mean millennials are cheap—about 27% of millennials say they would rather pay higher prices if it means doing away with tipping. However, overall, only 21% would prefer to pay more if it means tipping less, or not at all.

The data also shows that those with more money tend to tip more, and young adults as a whole have lower incomes than those who are older and further in their careers. According to the survey, demographic groups with incomes more than $75,000 per year and those with college degrees are more inclined to do away with tipping.

That being said, tipping is still an important income component for most servers, bartenders, and others in the service industry. Generally, tipping is seen as a way for customers to have more control over their experience, while also motivating employees to provide good service

The Emily Post Institute, which provides etiquette training, says tipping “is one of the most stressful and confusing aspects of etiquette today.” It recommends tipping 15 to 20 percent on the pre-tax total at sit-down restaurants.

Some industries, like cruise lines and high-end restaurants, have done away with tipping and rather include service charges in the customers’ bills. In many countries around the world, tipping isn’t a common or even accepted practice.

This study was conducted for CreditCards.com by GfK Custom Research North America. The sample consisted of 1,000 interviews of customers ages 18 and older, conducted in May 2018.