Far Down, Far Up, Far Out

Vast and quirky, Southeast New Mexico is a road-tripping riddle. 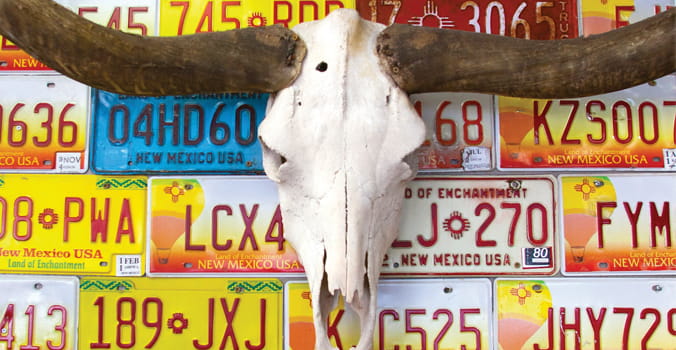 Being first-time visitors to Carlsbad Caverns National Park, my wife, Tami, and I chuckled at some of the bewildering questions that park rangers have fielded from visitors. Maybe the remark most likely to make a ranger cringe: So what is this—just a hole in the ground?

Yes, it’s a 73-square-mile hole, as we learned at the Carlsbad, New Mexico, park’s visitor center. But consider its 250-million-year history that began when a colossal ocean reef was thrust up and naturally sculpted into caves and passageways sprouting magnificent stalactites and stalagmites. Descriptively named rooms such as Hall of Giants and Lake of the Clouds give a hint at nature’s handiwork here.

Another common question: How much of the cave is underground? For the record, the entire limestone labyrinth lies deep beneath the stark Chihuahuan Desert. You can walk the one-and-a-quarter-mile Natural Entrance Trail to the caverns’ 750-foot depths and choose from several self-guided and ranger-led tours offering different experiences. Most visitors hike down to the arrival/departure hub of the Underground Lunchroom chamber, explore various interpretive routes, and then catch the long elevator ride
back to the surface.

Down Under
We didn’t veer to the more demanding guided tours requiring headlamps, helmets and knee pads. These can take visitors to chambers such as Spirit World, an area filled with white stalagmites that resembled angels to those who discovered the chambers, or to Chocolate High’s milelong maze of small passages above a mud-filled pit called Chocolate Drop.

For our money ($10 per adult), the most popular route, the Big Room, delivered the expected awe. Humorist Will Rogers called it “the Grand Canyon with a roof over it,” as it’s the largest single-cave chamber in North America. The one-and-a-quarter-mile paved path has numerous viewing stations for peering at bizarre cave formations. A sketchy wire rope ladder installed by early explorers in 1924 to access deeper chambers still dangles into the void, attesting to the pluck of early explorers. 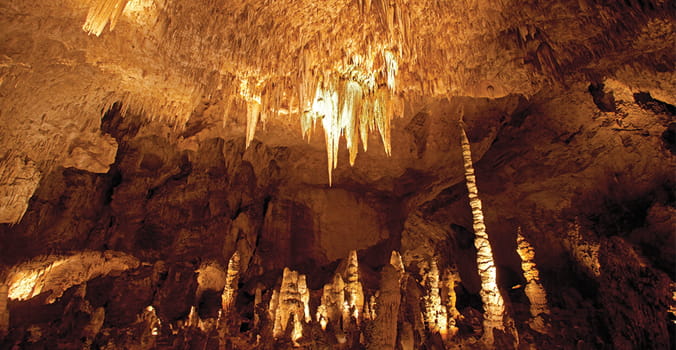 Getting to Carlsbad Caverns isn’t a Sunday drive; the nearest practical flight hub is 150 miles away in El Paso, Texas. So there’s no better excuse for a weeklong road trip into the Land of Enchantment’s southeast corner—keeper of other exclusive oddities. After all, where else do atom bomb sites, UFOs, Billy the Kid and Smokey Bear share the same billing?

Along U.S. 285’s north–south corridor, the khaki landscape comes dotted with isolated communities and sprawling ranches, while volcanic buttes, dark mesas and mesmerizing mountains rear to the west. But the dominant feature is emptiness. We clocked a 60-mile stretch where the only sign of civilization beyond the highway was the sun-weathered Chavez ghost town choked by tumbleweeds. Nameless dirt roads shoot off from the highway to parts unknown, which brings up a couple other New Mexico distinctions: about 75 percent of its roads are unpaved, and with less than 20 residents per square mile, there are more cows than people.

Higher Ground
With the Caverns checked off our bucket list, we drove a couple of those dirt roads and eventually aimed west along U.S. 82 toward the forested 9,646-foot-high Sacramento Mountains. From a distance, the 85-mile-long range ploughs into the clouds like the dinosaur-inhabited sky islands from Sir Arthur Conan Doyle’s Lost World novel. Of course, that fanciful prospect faded soon enough, and we settled for sightings of bald eagles and mule deer before pulling into Cloudcroft, our next stop.

Cloudcroft is a mountain oasis cute enough to charm the antlers off those deer. Legend says that early surveyors observed a single white cloud settled on a meadow surrounded by pines, a place they called Cloudcroft, a “field for clouds.” That whimsical pride still exists in this town. Locals see their community of about 700 as an alpine El Dorado “nine-thousand feet above stress level,” as the saying goes. In 2002, Fodor’s Travel proclaimed it the “Number 3 Most Overlooked and Underrated Destination Spot” in the nation.

Truth is, this compact haven has been a covert getaway for decades. In 1900, local desert dwellers began escaping the heat to Cloudcroft by chugging 26 miles and 6,000 feet skyward on the new Cloud-Climbing Railroad, crossing the Mexican Canyon Trestle that still stands near town. Nowadays, it’s mostly overheated Texans who are lured by the mild summer temperatures, abundant hiking trails, clear streams and dollop of Old West appeal. Wintertime is lively thanks to nearby Ski Apache, the country’s most southern ski area and recipient of 15 feet of dry powder per season.

Walking Burro Street, the town’s main drag, is like dropping into an Old Western movie set, complete with covered boardwalks. A handful of shops and eateries shout “New Mexico,” especially the Burro Street Exchange. If you want cactus jelly, habanero olive oil, Native American art and slabs of Jurassic fossils, this is the place. For aficionados of the vine, the Noisy Water Winery is a more contemporary place to linger and learn about the state’s significant wine industry. But if it’s authenticity you’re after, pay a visit to the Western Bar & Café, a rustic watering hole for locals and travelers alike. It’s cash-only and doesn’t carry fancy beers. And don’t worry when Harley Davidson bikers roar up; the weekend warriors I met were doctors, lawyers and other professionals you might want as neighbors. 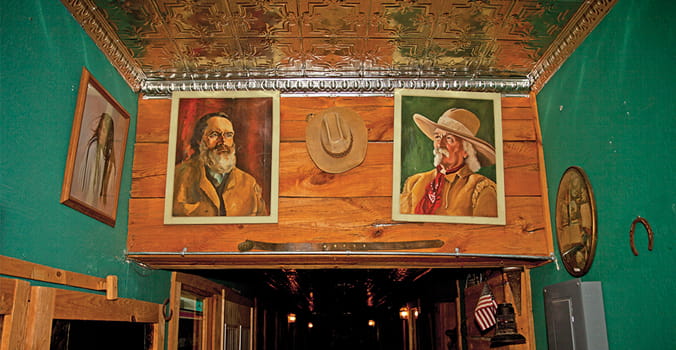 There are shaded cabins and other lodging options, but Cloudcroft begs a stay at The Lodge Resort. Burrowed in the forest above town, this Victorian-era hotel was originally built in 1899 to house railway workers who cut timber for railroad ties. That arrangement didn’t last long, and a few years later, it reopened as an elegant mountain hideaway open to the public. My wife loved our lacy chiffon-adorned room with a four-poster bed and wonderful view of the mountains. Me? I headed to the downstairs bar.

When the bartender mentioned Al Capone’s name, I perked up. Turns out, the entire saloon-style wood bar at which I sat was owned by the gangster in Chicago before being disassembled and shipped to Cloudcroft. But Capone had serious competition once the name-dropping began. Mexican bandito Pancho Villa was an early visitor to The Lodge in 1911. Conrad Hilton actually lived at The Lodge in the 1930s. Judy Garland, Clark Gable, U.S. presidents and astronauts—all on the guest ledgers. And what’s an old hotel without a ghost? In this case, it’s the ghost of Rebecca, a young hotel resident murdered by a jealous lover in the early 1900s, who reportedly creates mischief today.

Even in the cool high-altitude, the New Mexico sun can be relentless. Chilling out sounded like a good idea on our second day in Cloudcroft, so we spent an afternoon on the Willie White Spur Trail leading to the Bluff Springs Waterfall. This would rate a very modest tumbler anywhere else. But here, with the sizzling Chihuahua Desert a half-hour down the road, the sound of water and sensation of mist cooling our faces was an indulgence. That evening, we splurged on a farewell dinner at The Lodge and ordered Rebecca’s Chateaubriand Selection, a six-course feast acknowledging the hotel’s legendary apparition. If there’s any reservation about Cloudcroft, it’s that we didn’t spend more time there.

Space to Spare
A couple hours’ drive northeast, we were back on the desert floor, this time in Roswell. It’s known as sacred ground for UFO believers who claim that the famous 1947 crash, known as the Roswell Incident, is a government cover-up for extraterrestrials and wreckage found on a ranch north of town. Considering that a government press release first deemed the sighting a “flying disc” and then later retracted and attributed it to a “weather balloon” crash, the intrigue seems perfectly suited here. 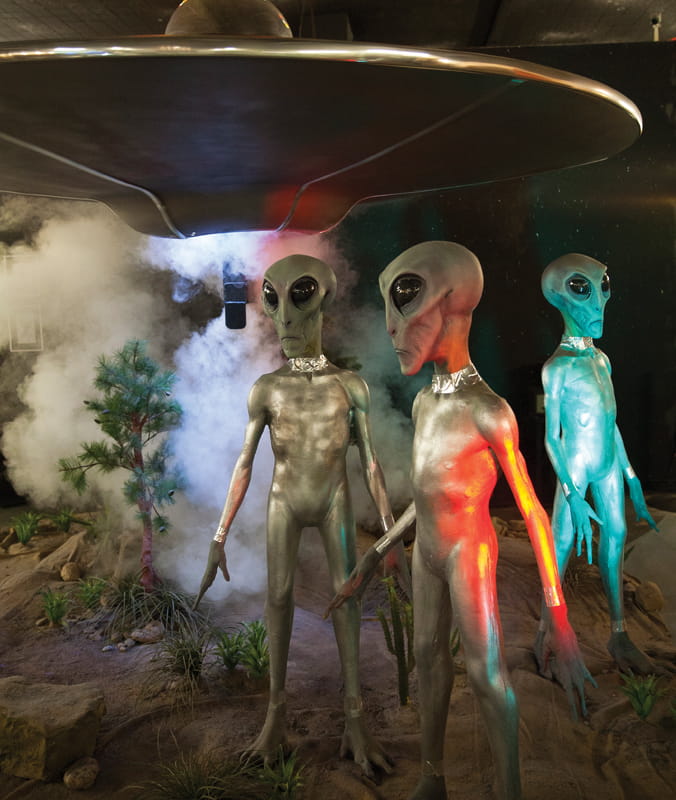 The town’s identity is largely framed by the 70-year-old incident, and its centerpiece is the UFO Museum and Research Center, which attempts to take a scholarly look at the events. Reading through the museum’s accounts by witnesses and retired government officials makes an interesting case for conspiracists. Something happened; numerous newspaper accounts were all over the story. A series of changing accounts from government officials only stoked the mystery, which resurfaced in 1978 when physicist, lecturer and UFO researcher Stanton Friedman popularized the space-alien angle. Believe that theory or not, any visit here has to take in the museum and its diorama of dazed-looking aliens standing next to their spacecraft in the sagebrush desert.

During our visit, the town was spiffing up for the expected 40,000 visitors making the pilgrimage to the 22nd Annual Roswell UFO Festival held in late June/early July. We’d miss it, but we took matters into our own hands by booking the Roswell UFO Guided Tour with Dennis G. Balthaser, known as the “Grandfather of modern UFO cases.” Together with a couple of other visitors, my wife and I rode in Balthaser’s SUV while we toured locations associated with the spacey incident.

“The numbers of civilian and military witnesses who have come forward to talk about their role in the Roswell Incident have reached the hundreds,” he told me unflinchingly while staring me in the eyes. I had no doubt. Decked in trim Western attire and a cowboy hat, the ramrod-straight ex-military man commands respect.

We visited homes of various long-dead witnesses; Hangar 84, where the alien bodies and space debris were allegedly stored; the former Roswell Army Airfield, where secret containers were airlifted away; and other sites tied to the story. The three-hour tour was fascinating and fun, and we all came away with an appreciation for a mystery that Balthaser and others continue to examine. 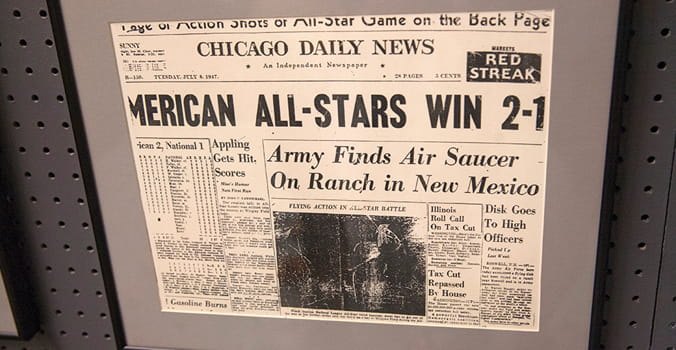 A few more alien encounters at shops devoted to UFOs, and we’d had our fill of ETs. But there’s more to Roswell than this famous incident, so we drove 15 miles south of town to another local enigma: Bottomless Lakes State Park. Located beneath limestone cliffs by the Pecos River, the chain of eight circular lakes appears like a blue mirage in the otherwise beige landscape. But bottomless? Facts come easy on this point; the deepest of the park’s lakes is 90 feet. It’s thought that the lakes’ saltwater chemistry likely befuddled early explorers gazing into the dark, fishless waters created by collapsing ancient caves.

For a prickly landscape studded with cactus and creosote bush, the presence of water is special. Naturally, we took the plunge and cooled off along the sandy shore of 15-acre Lea Lake, the only one allowing swimming. Nearby, kids played along the shallow shore while watchful parents fidgeted with their smartphones. This could be anywhere, I thought. Then again, after 1,000 road miles in the vastness of southeast New Mexico, maybe it could only be here.

This article originally appeared in the November/December 2017 issue of AAA World. 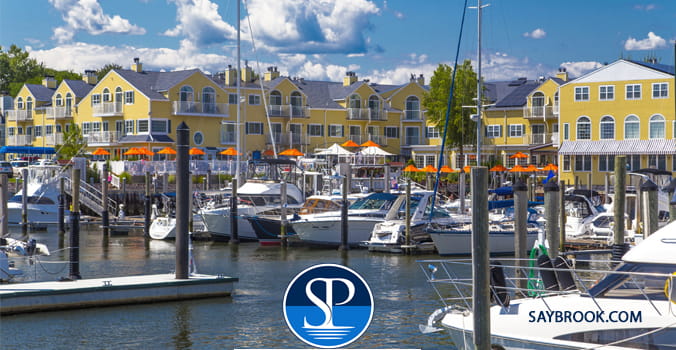 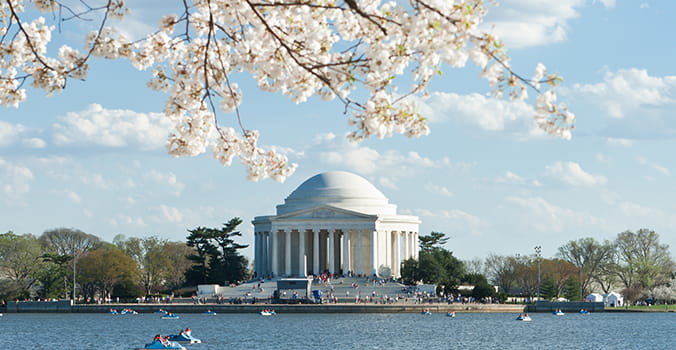 Looking for a weekend or longer trip that won't break the bank? The nation's capital overflows with free and low-cost attractions and entertainment. 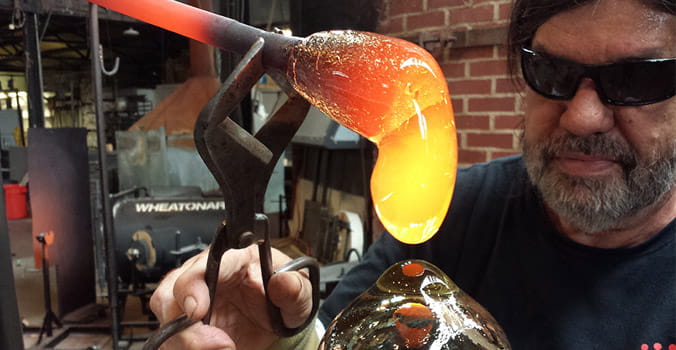 The history and artistry of glass take on fascinating forms at South Jersey's WheatonArts and Cultural Center.