At the beginning of June 2020, amid all the turmoil last year had to offer, my wife Katelynn and I finished building our dream home. This was no ordinary home; it was a vessel that would take us anywhere—and in style. Our new home was an 80-square-foot metal box outfitted with solar panels, a receptacle for 33 gallons of fresh drinking water, a refrigerator, an oven and stovetop, maple countertops, a dining area, bed, composting toilet, and even an indoor shower!

It’s probably a little different than what you would think a dream home might be, but to us, not only was it an ideal dwelling but our vehicle to freedom. The day it was finished, our hearts were truly filled with joy. It was time to start a new chapter and embark on the biggest adventure of our lives so far: a true and great American adventure. 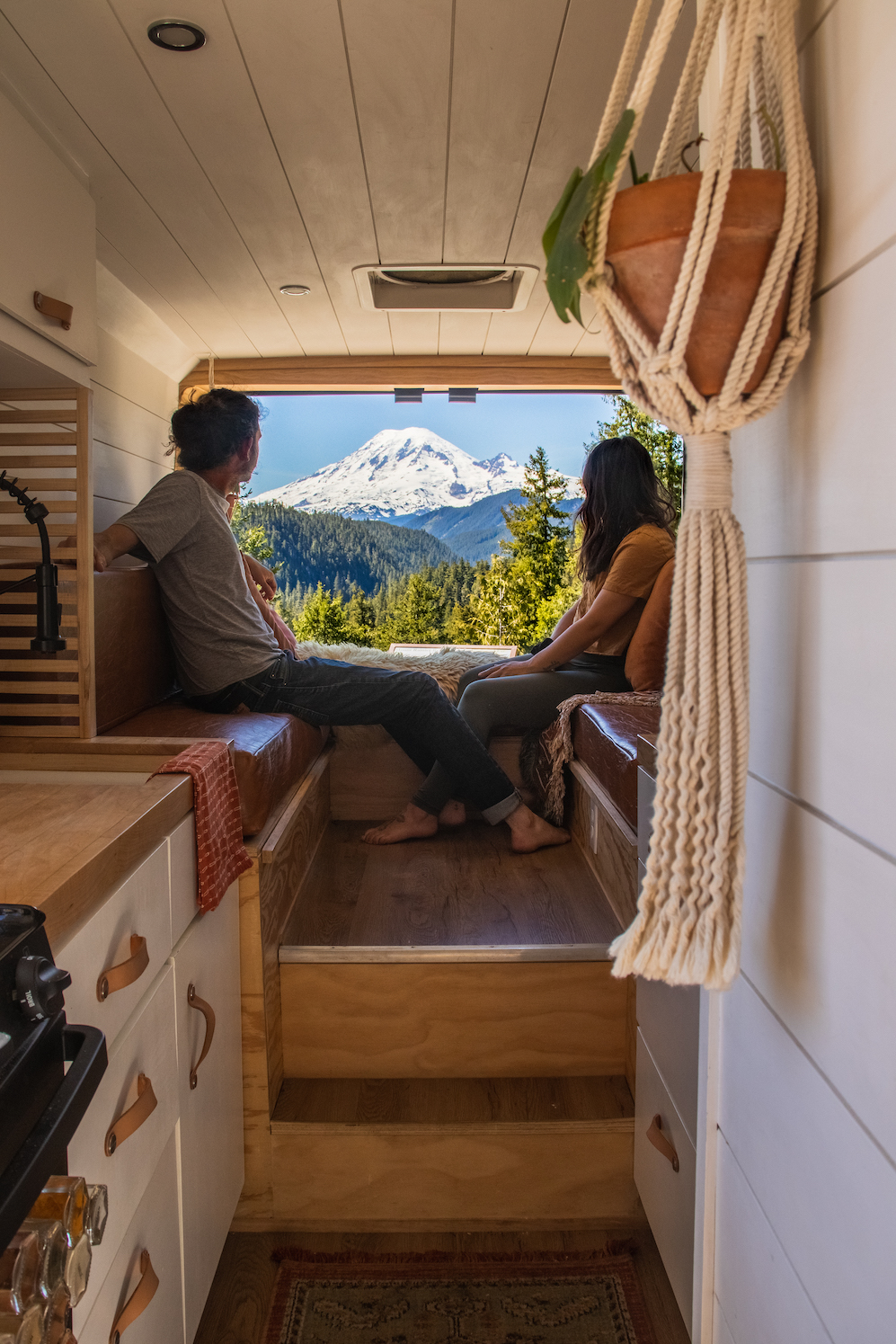 Cathedral Rock
We pick up our adventure in the spring of 2021 when we were cruising through the desert toward Sedona, Arizona. As soon as we crossed into Sedona, we were met with monumental red rocks. The red cliffs and buttes towered overhead, complemented by the greenery settled at their feet. We couldn’t wait to conquer these mountains. Most notably, we conquered Cathedral Rock, a moderate hike with the reward of an amazing view of Sedona at the top. 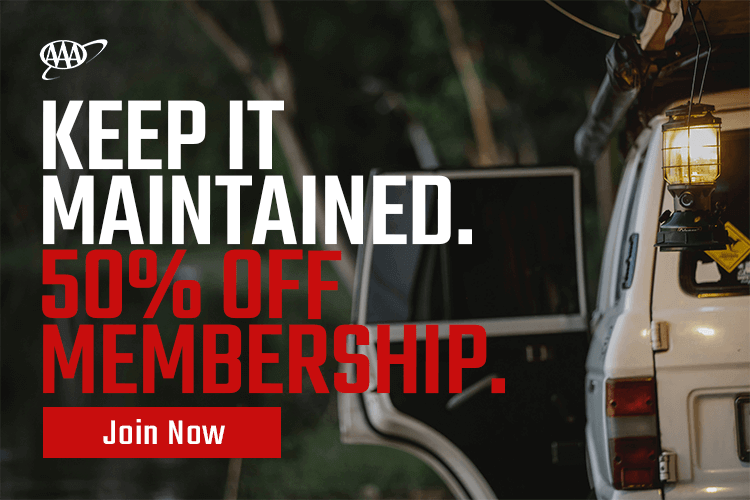 Later that evening, Katelynn and I drove outside of town to a camp spot with beautiful views of the mountains surrounding us. We met up with our friends in the area—Dave and Nicki, along with Cody and Christina, drivers of The Desert Cruiser. After settling in, a van pulled up to us and out stepped a strapping man with his dog. He introduced himself as Travis. After talking with him for a while, we invited him to stay with our group—after all, the more, the merrier, right? Soon, yet another van drove over to us and parked. A dark-haired, blue-eyed woman rolled down her window and shouted out, asking if it was okay to park there. We’d come to know her as Rachel. Like Travis, she was a free-spirited solo vanlifer who would become a great friend. That made eight of us with our four vans parked in a circle and a fire pit in the center. This was home for a little while. 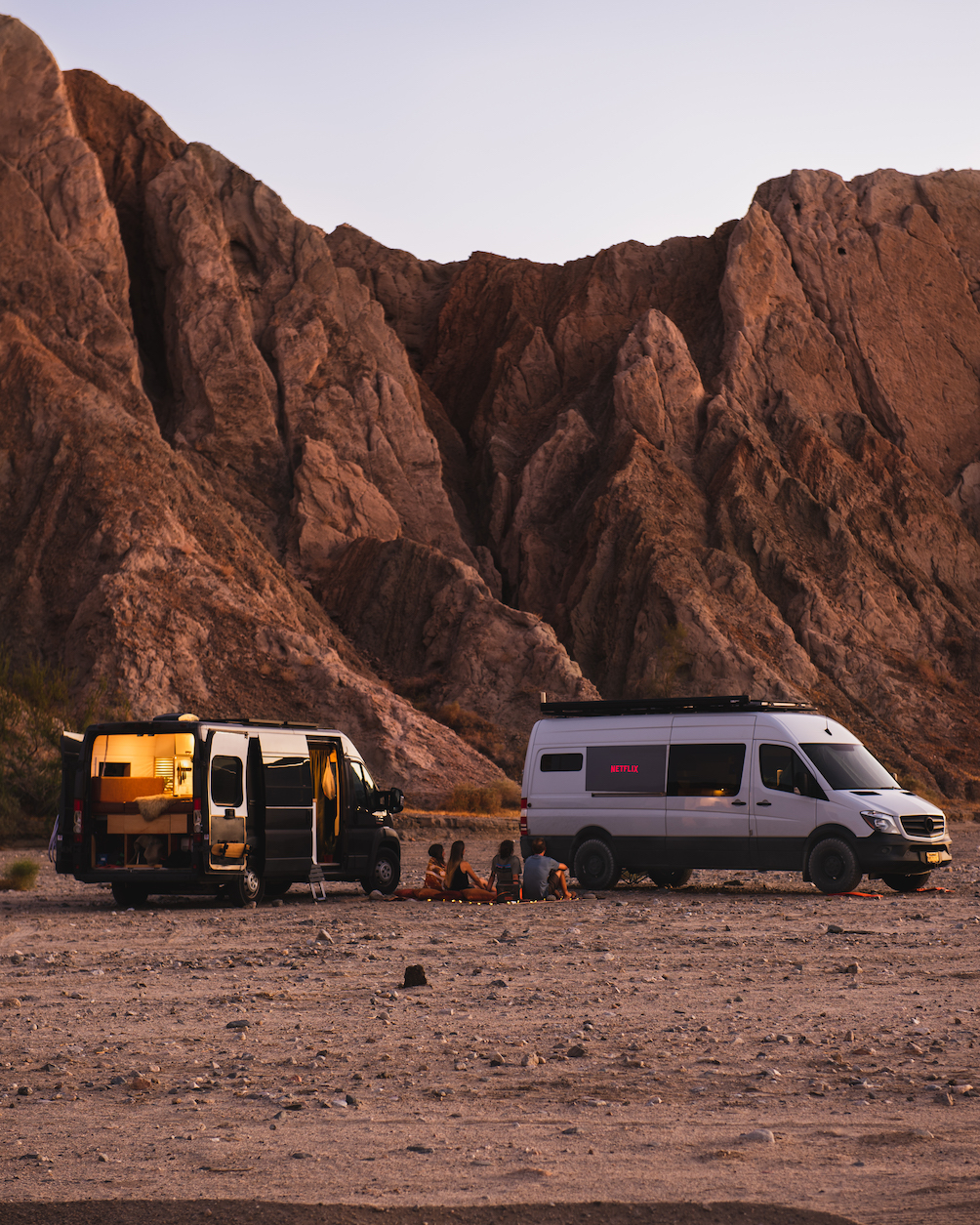 Boynton Canyon Trail to Subway Cave
The following days were spent getting to know our new friends and enjoying the land of Sedona. One of the more memorable hikes we went on was the Boynton Canyon Trail to the Subway Cave. We hiked through the woods for what seemed like hours before the trees finally gave way to the base of a cliff. From there, we ascended a steep incline into the cave forty feet above the ground. I thought the hike was over, but I was wrong. Travis and Rachel kept moving onward out of the cave along a cliff only three feet wide, which led to smaller caves that had been used as dwellings some time ago. I can’t lie—I’m very intimidated by straight drop-offs, but everyone had followed them out of the cave and out of sight. I knew I had to muster up a great deal of courage if I wanted to stick with the group. Trying to keep steady, I started walking along the cliff but made the poor choice of looking over the edge. I was quivering.

Across the canyon, I heard Nicki, Rachel, and Travis cheering me on and telling me to keep going. This put me in the right frame of mind—I wasn’t about to let any sort of anxiety stop me now. Once I made it across, I was high on adrenaline, proud of myself for overcoming one of my fears, and thankful for my friends’ support. Every day after that would be similar, and after each day had passed, our new friends started to feel more like family. 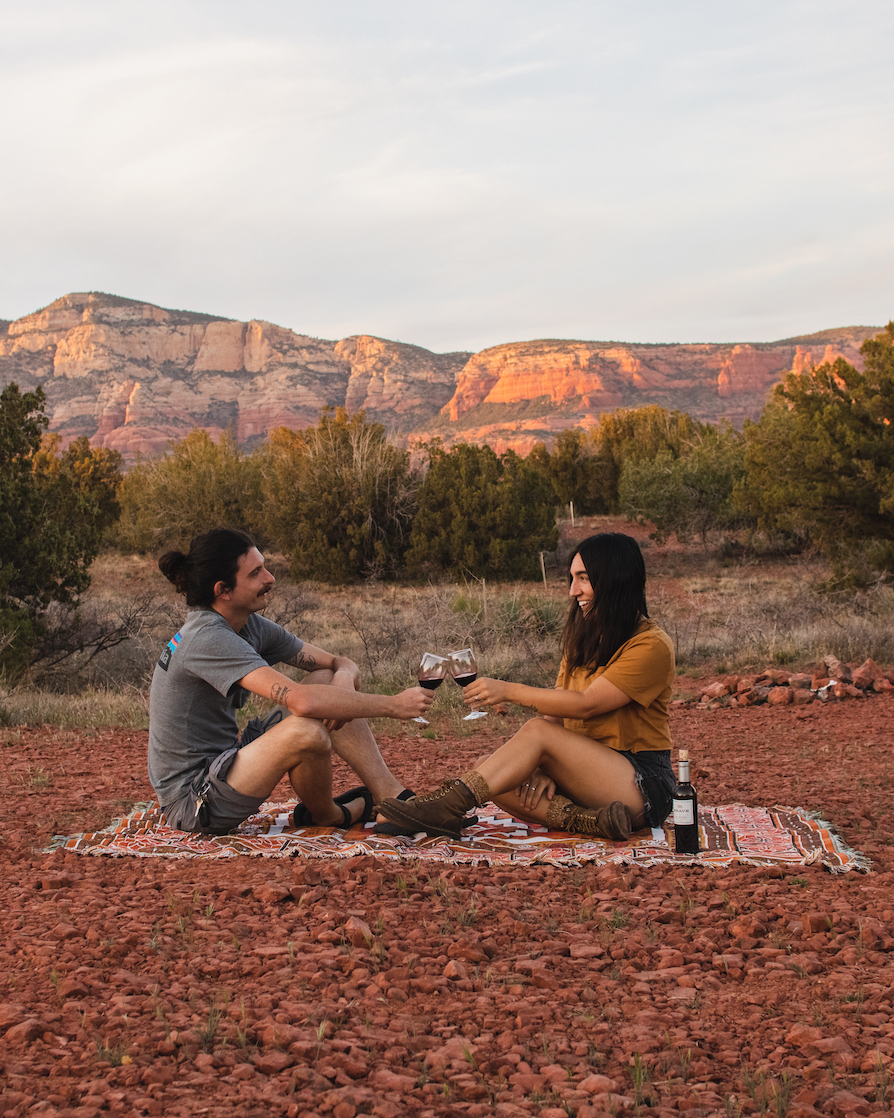 The Chasm of Doom
After that week, we left Arizona to cross into California, accompanied by Cody and Christina. They brought us through Joshua Tree and showed us all of the spots they loved—but there was one place, in particular, they wanted to show us. The escapade took us on an unmarked trail to an opening in the side of a giant rock formation. The opening, and what’s inside, is known by the most adventurous as The Chasm of Doom. Katelynn and Christina didn’t enter, but Cody convinced me to go.

“The name certainly fits this eerie place,” I thought to myself. We entered the dark and musty chasm with nothing but flashlights in hand. Like a mad man, Cody was scrambling and running through the dark so fast I could hardly keep up. Parts of the cave were so narrow I could barely fit. Thankfully, we made it out alive and without getting lost. Looking back, I’m grateful for friends that push me out of my comfort zone. 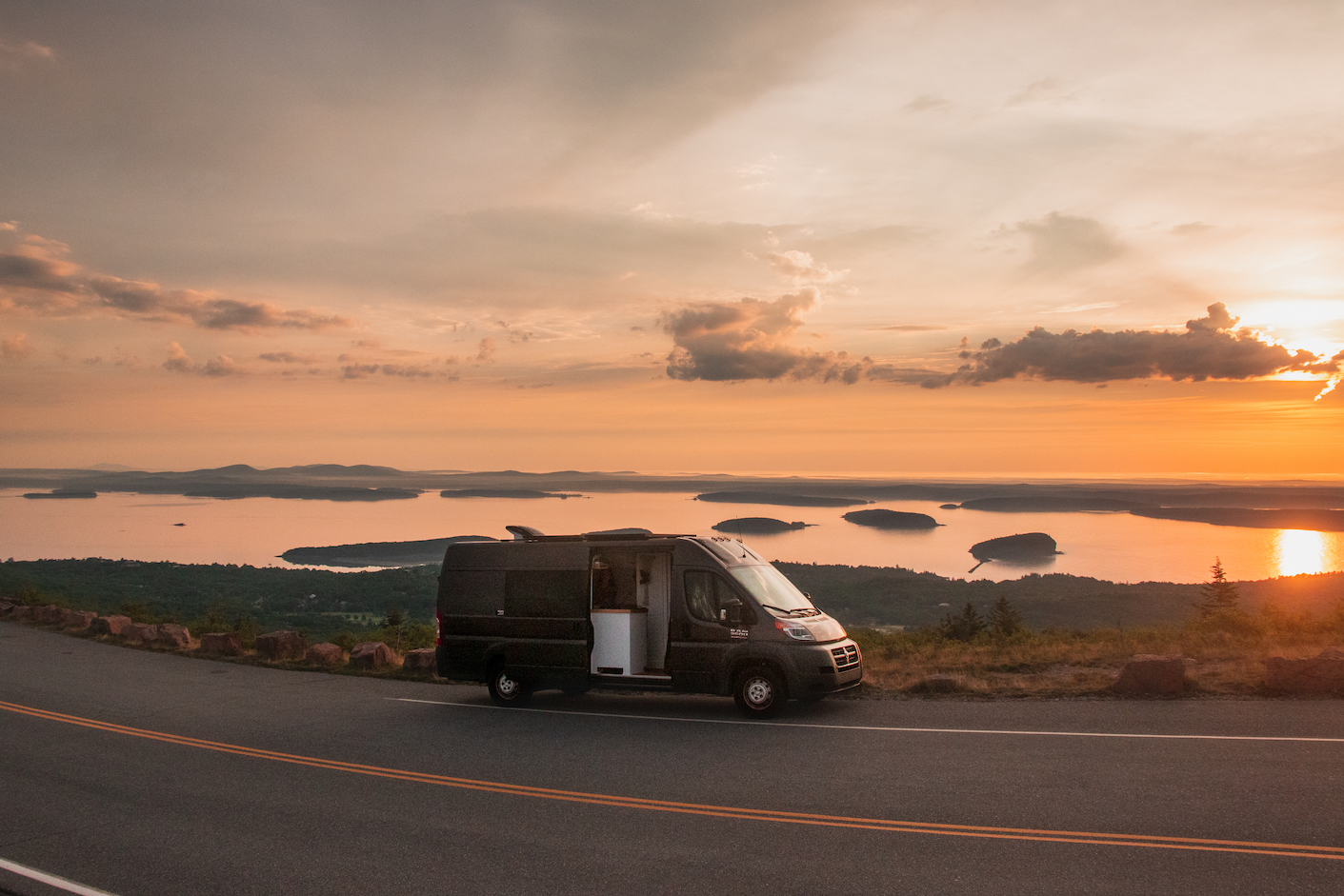 Our home—the van—and the time spent traveling west gave Katelynn and me a feeling we’d never had before. A feeling filled with opportunity. There was nothing that held us back on our trip. Out there, away from it all, we didn’t have to answer to anyone but ourselves. We could feel it in the air and the energy of the people we met. There was freedom. The epitome of vanlife adventures. And the best part? It was only the beginning. 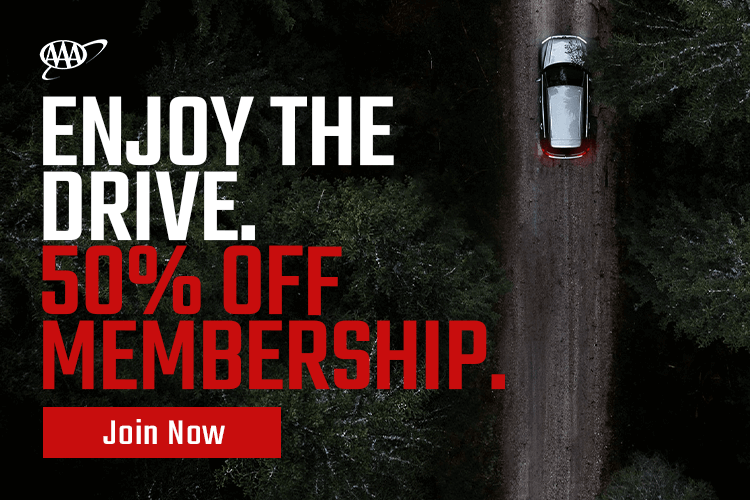 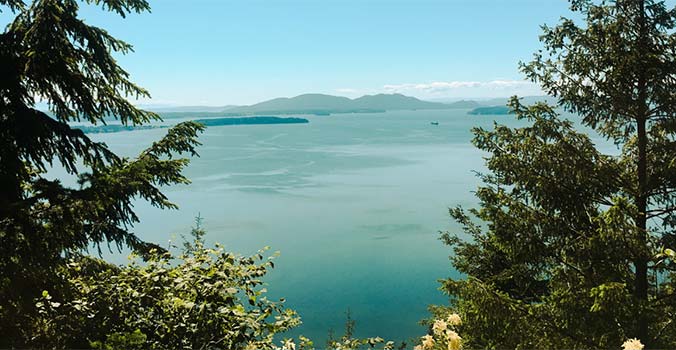 A Beginners Guide to Exploring the Pacific Northwest