New study shows almost 90 percent engage in risky behavior (and they're not alone!)

Hamilton, NJ, February 15, 2017 ― A new report from the AAA Foundation for Traffic Safety finds that while young millennials are the riskiest drivers – none of us are setting good examples.

According to the study, almost 90 percent of young millennials – defined as those between the ages of 19-24 - engaged in at least one risky behavior behind the wheel in the past 30 days, earning the top spot of worst behaved drivers in the US.

These dangerous behaviors ― known to increase crash risk ― included texting while driving, speeding and running red-lights.  In fact, 50 percent of the young millennials said they’d driven through a red light in the past month. These findings come as U.S. traffic deaths rose to 35,092 in 2015, an increase of more than 7 percent, the largest single-year increase in five decades.

New Jersey recorded 522 fatal collisions that resulted in 562 deaths, according to the New Jersey State Police 2015 Fatal Motor Vehicle Crash report.  This is a decrease of one fatal collision over 2014, but an increase of six deaths which equates to 1.54 motor vehicle fatalities per day.

“As disturbing as this may be, equally disturbing is the fact that the millennials behaving badly are hardly alone” says Tracy Noble, Manager of Public and Government Affairs for AAA Mid-Atlantic. “Before you start finger pointing, look in the mirror. The study found the majority of drivers of ALL ages have also engaged in the same risky behaviors in the last 30 days.”

By rank and by age group, the percentage of drivers who reported engaging in speeding, red light running or texting behind the wheel in the past 30 days include: 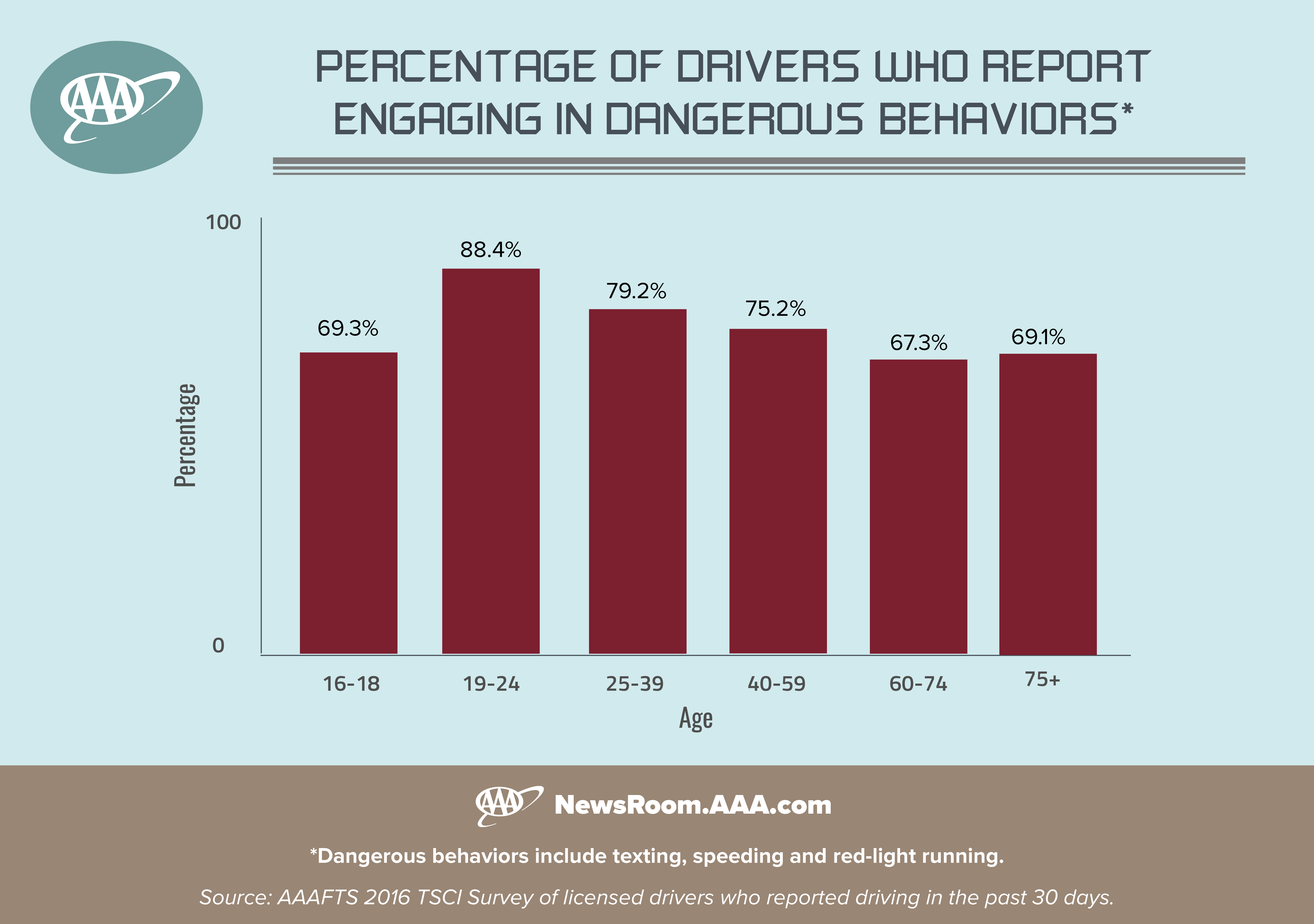 These findings, part of AAA’s annual Traffic Safety Culture Index (TSCI), come as US traffic deaths jumped 7% in 2015 to more than 35,000 - the largest single-year increase in five decades.

For several years running now, the TSCI reveals a culture among US drivers of ‘do as I say, not as I do’.  The same drivers who describe texting and other risky behavior as ‘unacceptable’, also admit to engaging in it.

“Alarmingly, some of the drivers ages 19-24 believe that their dangerous driving behavior is acceptable,” said Dr. David Yang, AAA Foundation for Traffic Safety executive director. “It’s critical that these drivers understand the potentially deadly consequences of engaging in these types of behaviors and that they change their behavior and attitudes in order to reverse the growing number of fatalities on U.S. roads.” 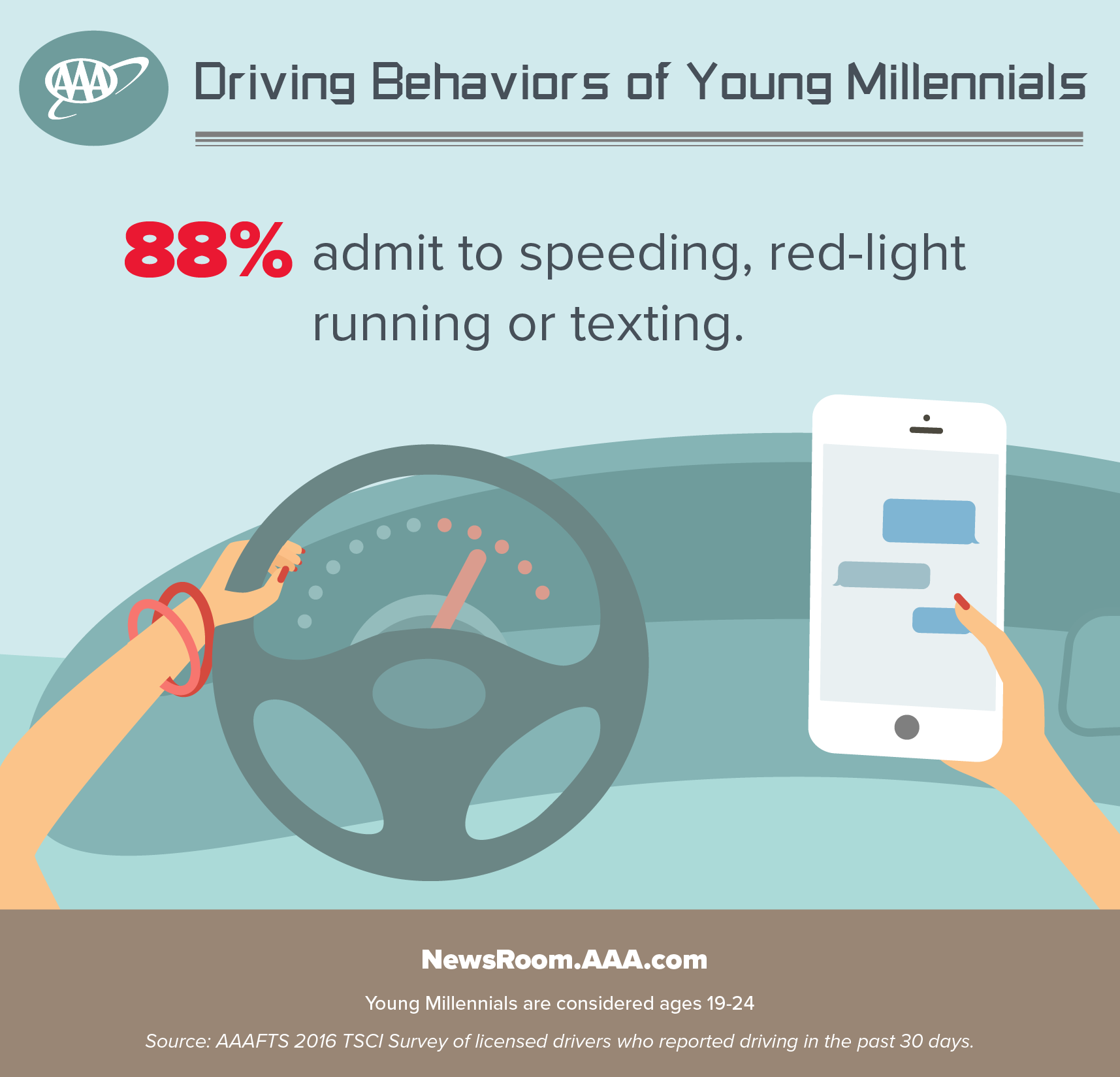 The new survey results are part of the AAA Foundation’s annual Traffic Safety Culture Index, which identifies attitudes and behaviors related to traffic safety. The survey data are from a sample of 2,511 licensed drivers ages 16 and older who reported driving in the past 30 days. The AAA Foundation issued its first Traffic Safety Culture Index in 2008, and the latest report is online at www.AAAFoundation.org.

AAA provides automotive, travel and insurance services to 56 million members nationwide and nearly two million members in New Jersey. AAA advocates for the safety and mobility of its members and has been committed to outstanding road service for more than 100 years. The not-for-profit, fully tax-paying member organization works on behalf of motorists, who can now map a route, find local gas prices, discover discounts, book a hotel and track their roadside assistance service with the AAA Mobile app for iPhone, iPad and Android. For more information, visit  https://aaa.com