AAA Kansas provided the Kansas Highway Patrol a state-of-the-art DAX unit – the first of its kind in the state – to enhance the ability to collect evidence in suspected drugged driving cases.

TOPEKA, Kan. – Jan. 18, 2018 – The nation’s decades-long campaign to combat drunk driving continues to make our roads safer, but use of marijuana, other illegal drugs, as well as prescription drugs is increasingly prominent on the highways, creating new safety questions, according to U.S. Department of Transportation National Highway Traffic Safety Administration studies. 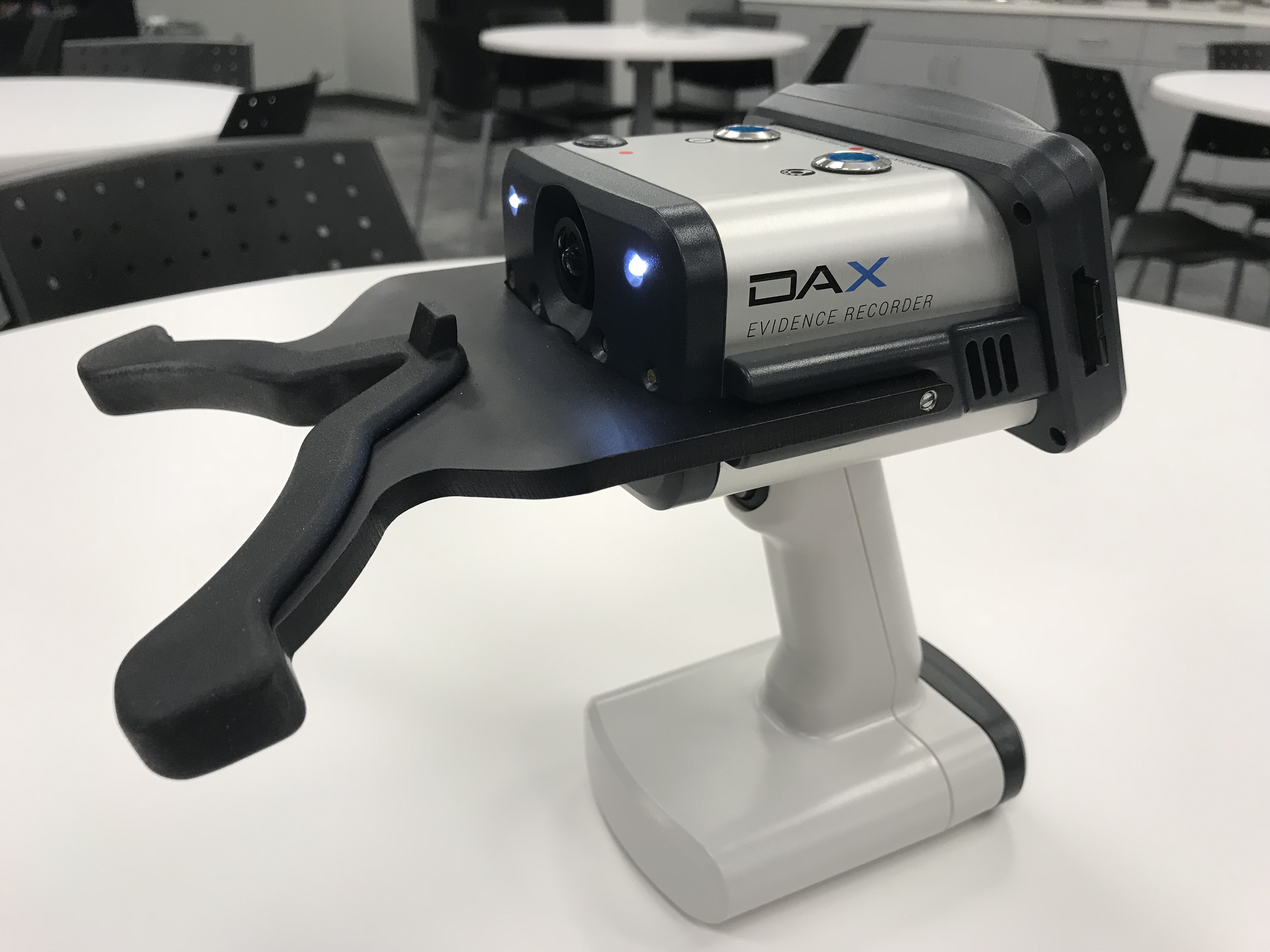 One study, the latest version of NHTSA’s Roadside Survey of Alcohol and Drug Use by Drivers, found that the number of drivers with alcohol in their system has declined by nearly one-third since 2007 and by more than three-quarters since the first Roadside Survey in 1973. But that same survey found a large increase in the number of drivers using marijuana or other drugs. In the survey, nearly one in four drivers tested positive for at least one drug that could affect safety.

It is a big problem that is likely to get bigger, as recreational use of marijuana is legalized in a growing number of states, including Kansas’ neighbor, Colorado. Heroin and opioid addiction and overdoses are skyrocketing across the country, and that could translate to increased prevalence here in Kansas.

The growing drugged driving challenge requires increased expertise, resources and new technology to tackle, and one collaboration is working toward that. AAA Kansas and its AAA Kansas Traffic Safety Fund are dedicating advanced technology, financial resources and other support to law enforcement groups across the state to better prepare police, sheriff and highway patrol officers to fight the burgeoning war on impairment on our roadways.

The newest and most revolutionary tool in combatting impaired driving is state-of-the-art technology, the first of its kind operating in Kansas. The AAA Kansas Traffic Safety Fund recently purchased a DAX video field evidence-gathering device and provided it to the Kansas Highway Patrol (KHP) for training and use on the highways. 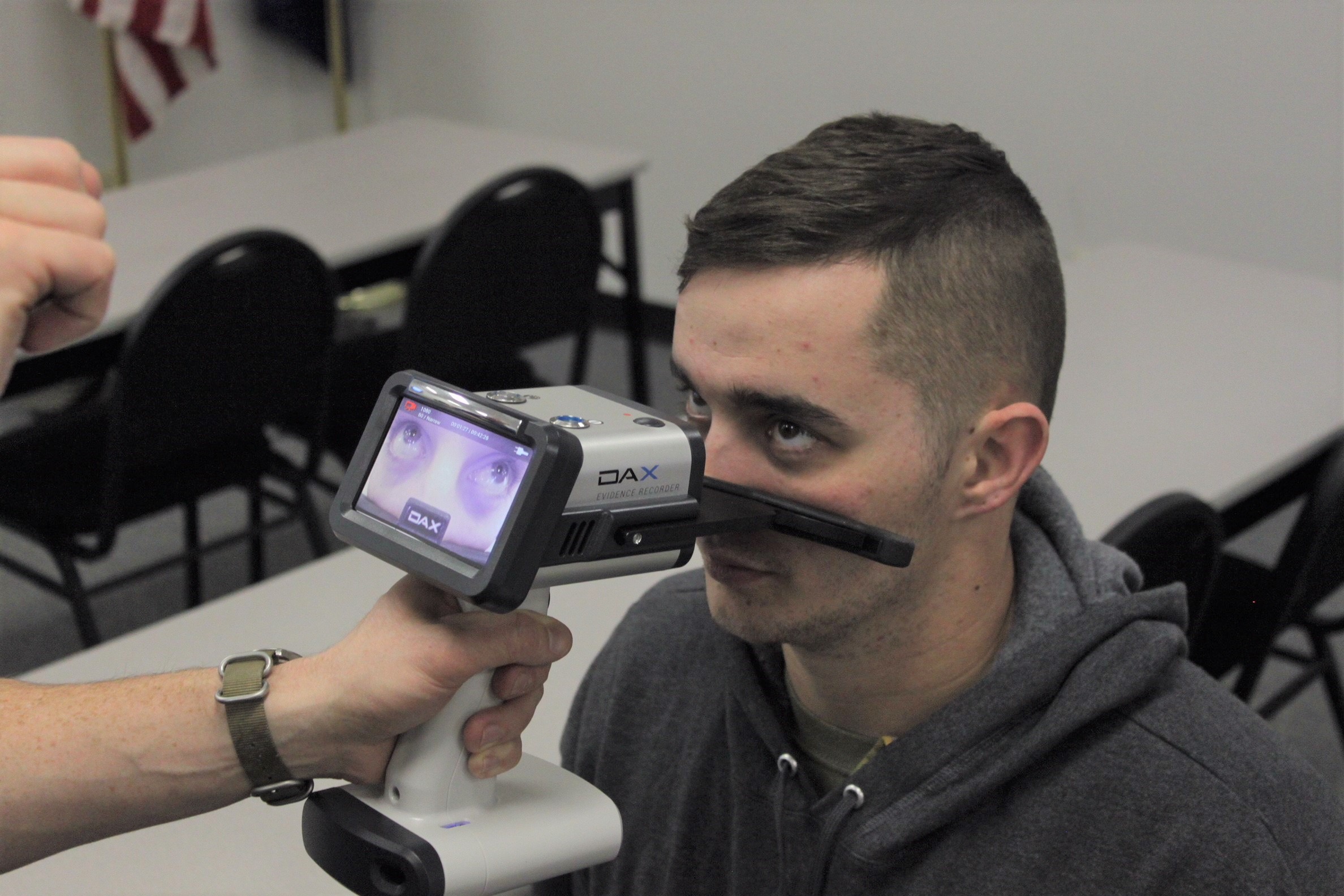 DAX, created by Ocular Data Systems (http://www.oculardatasystems.com/), is a goggle-like device that allows law enforcement officers to collect and record detailed video of the eye responses and movements of a suspected impaired driver during a traffic stop. The ways eyes appear and react varies greatly and specifically depending on what drug a person has taken. For example, the eyes of a person under the influence of marijuana will dilate, while opioids such as oxycodone or heroin cause eyes to constrict. Data recorded by DAX can help police capture and document this evidence as part of their identification of a drugged driving offense and building of a case against the suspect.

“The DAX unit is an advanced tool that will help strengthen our ability to collect tangible evidence against suspected drug impaired drivers and move their cases through to prosecution,” said Jeff Collier, State DEC/SFST Programs Coordinator, Kansas Highway Patrol. “We will be using it, first, in our training of Drug Recognition Experts across Kansas and then taking it to the field for use in our investigations. AAA Kansas’ Traffic Safety Fund shares our commitment to roadways free of impaired drivers, and we greatly appreciate their support of this effort with the DAX and their other generous support of law enforcement.”

Collier added that with the availability of the DAX evidence recorder, Kansas law enforcement will be better trained in detecting specific signs of alcohol and drug impairment in the eyes, and be much more proficient in their ability to evaluate eye signs and symptoms. (For a visual demonstration of DAX, please view this news story from KAKE-TV Wichita: "New device to be deployed by troopers targeting DUI" - http://www.kake.com/story/37290576/new-device-to-be-deployed-by-troopers-targeting-dui)

The AAA Kansas Traffic Safety Fund, formed in 2003, operates with a mission to fund, support and foster traffic safety initiatives across Kansas. In the last few years, it has supported the high school student led Seatbelts Are For Everyone (SAFE) initiative and advocated for passage of the recently adopted law that increases fines for drivers cited for failure to wear seatbelts, with the increased revenue going to fund traffic safety education initiatives. Recent Traffic Safety Fund efforts have focused on collaborating with law enforcement to fight and reduce drugged driving on Kansas roads.

“Drugged driving is a real and extremely dangerous threat to roadway safety, and law enforcement officers are the most important front line in helping take drug impaired drivers off our streets and highways to make them safer for all drivers,” said Terry Keller, board chairman for the AAA Kansas Traffic Safety Fund. “We fully support these efforts and are working closely with law enforcement to help provide additional resources to help in this fight.”

In addition to technology such as DAX, another crucial tool in the fight against drug impaired driving is a large, widespread and well-trained group of drug enforcement officers. Advanced Roadside Impaired Driving Enforcement (ARIDE) is specialized training conducted for law enforcement officers by a select group of Drug Recognition Expert Instructors in Kansas. ARIDE is a 16-hour training course designed for officers who are highly proficient and active in alcohol impaired driving enforcement. This is advanced training for officers that have completed Standardized Field Sobriety Testing (SFST) training to give them additional skills to recognize signs and symptoms of impairment from drugs other than alcohol. AAA Kansas has provided information and sponsorship support at these trainings across Kansas, including Garden City, Goodland and Hutchinson.

The next and highest level of drug enforcement training is the Drug Recognition Expert (DRE) program, a nationally accredited 9-day training program whose curriculum is designed to give certified law enforcement officers the ability to identify persons who may be driving under the influence of a category of drugs, other than alcohol. Upon successful completion of all DRE training phases, the officer will be highly qualified to determine if a suspect is impaired, whether the impairment is drug related or medically related, and if drug related, what category or categories of drugs is likely to cause the observed and recorded impairment. The officer will then be able to offer expert testimony in court cases.

“Kansas officers are dealing with an increasing number of drug impaired drivers,” said Lt. Christopher Bauer with the Kansas Highway Patrol’s Breath Alcohol and Drug Evaluation Unit. “Cannabis and central nervous system depressant drugs like Xanax and Ativan are the biggest current concern, with stimulants like methamphetamine contributing also, but Kansas law enforcement is aware of what is happening nationwide with heroin and other narcotic analgesics. It is expected the narcotic trend will come to Kansas.”

Bauer added that Drug Recognition Experts are trained extensively to recognize effects and behaviors consistent with drug impairment which a lesser trained officer may ignore and fail to associate with an impaired driver. DRE’s also enable a lesser trained officer to collect more evidence which can be used to prepare a better court case to help convict the drug impaired driver. Drug impaired driving has historically been harder to prove in court due to the relatively uneducated views of judges and jurors related to drug impairment.

“Kansas has fewer than 90 DRE’s for a population of 2.9 million people and 105 counties,” Bauer said. “As drug impaired driving continues to be a bigger problem, it is imperative more DRE’s are trained and placed throughout the state. Almost one in four drivers have an impairing drug, other than alcohol, in their system. Combine this fact with distracted driving brought on by electronic devices, and we have a deadly combination.”

AAA is starting a public conversation in Kansas and across the nation about the emerging and growing issue of drugged driving, a problem that is quickly, and somewhat quietly, surpassing drunk driving as a major highway safety threat.

“As the motorist’s trusted and vocal advocate for more than a century, AAA is concerned about the tragic consequences that can result from drugged driving,” said Jennifer Haugh, Public & Government Affairs Manager for AAA Kansas. “Alcohol use by drivers is declining, and drug use is increasing – not just illegal drugs, but common prescription and over-the-counter medications, that while legal, impair driving. As more states legalize the recreational use of marijuana, we are beginning to learn the alarming implications that legalization has for traffic safety, law enforcement, health care, the courts and the community – and what we know so far should give us pause.”

According to AAA Kansas’ Haugh, most states are challenged to handle the growing incidence of marijuana-impaired driving, and that includes law enforcement with roadside detection, the courts with prosecution and states with data collection. Unlike with alcohol, no easy test currently exists to determine the presence of marijuana in the blood and, even if there were, there is no way to discern driver impairment based solely on toxicology tests.

“Drugged driving is a growing issue on our roads and an increasing challenge to law enforcement, said the KHP’s Collier. “The enforcement of alcohol impaired driving is straightforward. Impairment from alcohol is unchanging. That is to say, impairment from beer, wine and liquor is all the same – same signs and symptoms, same toxicology. However, with the advent of the multitude of synthetic drugs, identification and prosecution are real challenges in drugged driving cases. To effectively fight and stay ahead of offenders and the ever-changing mix of drugs on the street, we value and welcome all of the resources and partnerships we can have on our side. Safer Kansas roads is our common goal.”

AAA provides automotive, travel, and insurance services to 58 million members nationwide and more than 342,000 members in Kansas.  AAA advocates for the safety and mobility of its members and has been committed to outstanding road service for more than 100 years.  AAA is a not-for-profit, fully tax-paying member organization works on behalf of motorists, who can now map a route, find local gas prices, discover discounts, book a hotel, and track their roadside assistance service with the AAA Mobile app (AAA.com/mobile) for iPhone, iPad and Android.  For more information, visit www.AAA.com.