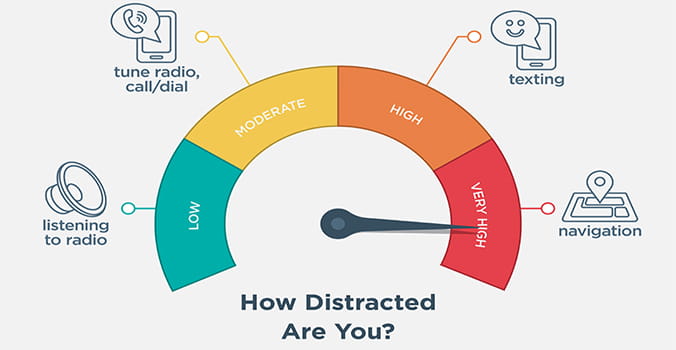 Given that April is Distracted Driving Awareness Month, AAA wants motorists to be aware that, despite perceptions to the contrary, cellphones are not to blame for many of the fatal crashes involving a distracted driver. This is not to say that cellphones are not a significant and potentially deadly distraction, but many other distractions are also cause for concern.

According to the latest federal crash data, confirmed smartphone use accounts for about 12 percent of all fatal crashes involving a distracted driver. Although it is widely accepted that distracted driving crashes caused by cellphone use are highly underreported, the data clearly indicates there are many other distractions that warrant our attention as well.

“There is no doubt that drivers are uniquely and dramatically distracted by their phones but AAA wants to take this moment to remind drivers that the list of other distracting behaviors is long. Too long. And too many lives are being lost as a result,” says Jim Lardear, spokesperson for AAA Club Alliance.

In fact, there are 18 possible causes of distracted driving listed on the standardized crash reporting forms investigators are required to fill out - and only three of them refer to a mobile phone. Other distractions include those caused by passengers, drivers adjusting climate or audio controls, reaching for something, eating or drinking and distracting activity outside the vehicle, such as a crash scene.

An analysis of data from the Virginia Tech Transportation Institute by the AAA Foundation for Traffic Safety (AAAFTS) revealed that taking your eyes off the road for more than two seconds doubles your risk of a crash.

Fatalities on our nation’s roadways have jumped dramatically in the last few years.

Pedestrian deaths are skyrocketing and distracted driving has been identified as a contributing factor in many of those crashes.

While the phone alone is not to blame for many of the distracted driving fatalities, there are still hundreds of lives lost each year because someone felt the need to answer a call, send a text or read an email. In its annual survey about driver behaviors - the Traffic Safety Culture Index – the AAAFTS found:

This is why AAA launched its ‘Don’t Drive Intexticated’ campaign in 2019, reminding all drivers that just as they would not drive intoxicated, driving ‘intexticated’ is also a risk.

AAA is urging drivers to put their phones down, look up and limit ALL distractions.

Slow Down, Move Over

Distracted drivers are unlikely to see first responders working at the roadside. ‘Move Over’ laws  exist in all 50 states and - while the laws vary from state to state - generally speaking, drivers are required to slow down and move over a lane any time there is a first responder working at the roadside. This typically includes police, fire, ambulances, tow vehicles and DOT or construction workers.

“It seems fitting that Distracted Driving Awareness Month intersects this week with National Work Zone Awareness Week because distracted driving puts those who work at the roadside at greater risk,” Lardear notes. “But the growing number of lives lost clearly illustrates that distracted driving in all its forms needs greater attention year round.”

AAA provides automotive, travel, and insurance services to more than 62,000,000 members nationally.  AAA advocates for the safety and mobility of its members and has been committed to outstanding road service for more than 100 years.  AAA is a non-stock, membership corporation working on behalf of motorists, who can map a route, find local gas prices, discover discounts, book a hotel, and track their roadside assistance service with the AAA Mobile app (AAA.com/mobile) for iPhone, iPad and Android.  For more information on joining or renewing a Membership, visit www.AAA.com.