January 22, 2018 - - Today’s national gas price average is $2.54, which is only one cent more than last week. The Energy Information Administration (EIA) reports that while gasoline demand modestly decreased (146,000 b/d), gasoline inventory increased by 3.6 million bbl. Combined, these two factors resulted in minimal impact on the national average this week. On the week, gas prices increased for 41 states with Florida seeing the largest jump at the pump with a nine-cent increase.

“For consumers, the question is how high will gas prices go in 2018,” said Leslie Gamble, AAA spokesperson. “Since 2014, gas prices decreased as much as 20 cents in the first three weeks of the year. This year, gas prices are five cents more than on January 1 of this year, a possible indication that prices in 2018 will likely be more expensive than last year.”

Today, motorists can find gas for $2.50 or less at 58 percent of gas stations nationwide. 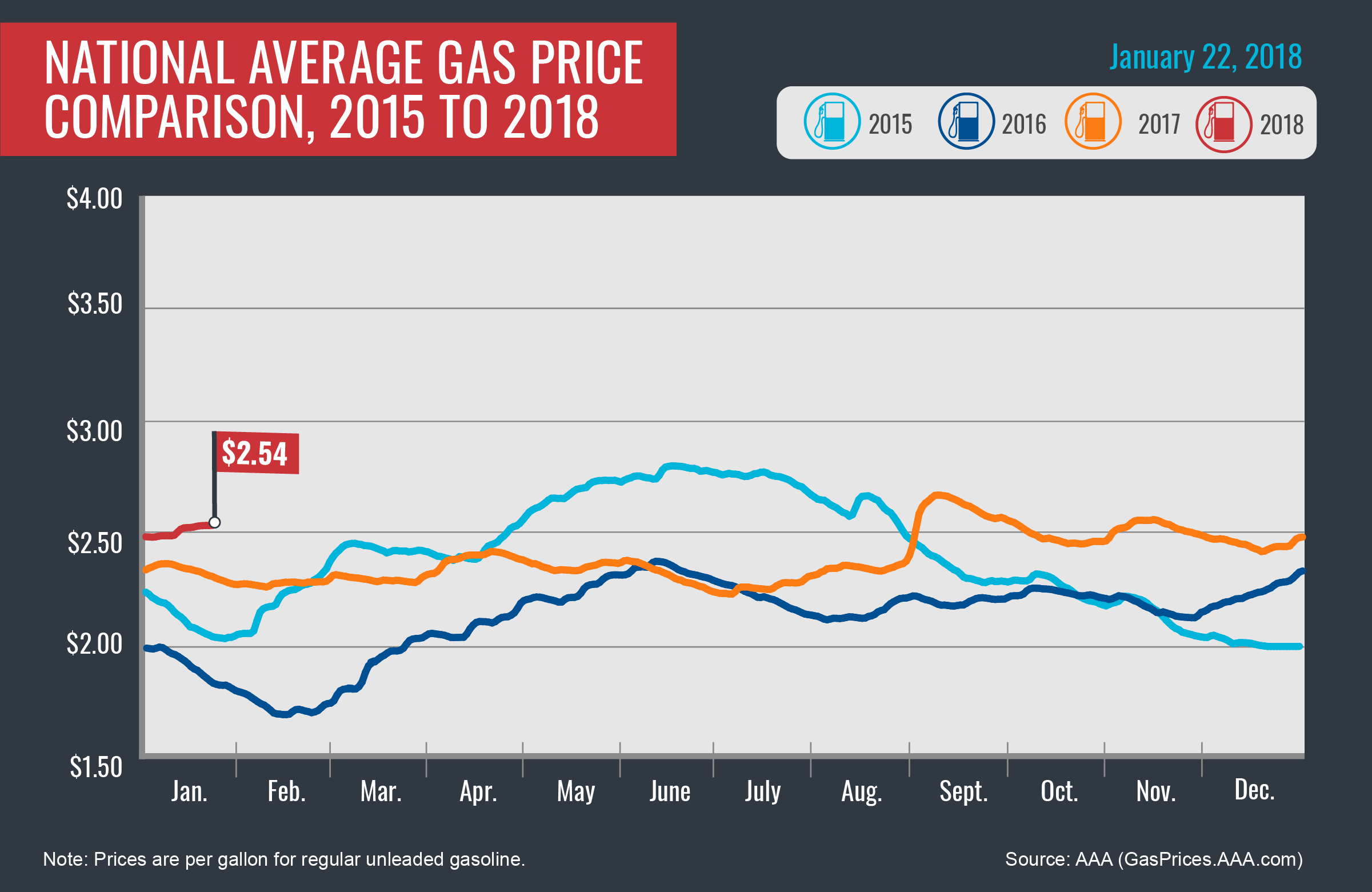 Gas stations across the West Coast region are selling gasoline at some of the highest prices in the nation. Six of the most expensive markets in the country are found in this region: Hawaii ($3.35), California ($3.19), Alaska ($3.08), Washington ($2.94), Oregon ($2.82) and Nevada ($2.69). On the week, Hawaii (+5 cents) saw the region’s largest increase, while California, Washington and Nevada increased by only a penny.

Total gasoline stocks in the West Coast increased by 1.2 million bbl, landing at 34.7 million bbl. According to the EIA, it is the highest inventory level in the region in four years, since the week of January 17, 2014.

Motorists in five Great Lakes and Central states are among the minority in the country seeing pump price decreases on the week: Indiana (-12 cents), Michigan (-10 cents), Ohio (-8 cents), Illinois (-6 cents) and Kentucky (-5 cents). All other states in the region are paying one to five cents more at the pump for a gallon of regular gasoline compared to last Monday.

While a few states in the region are welcoming cheaper gas prices this week, there are no cost savings at the pump compared to this time last year - gas prices are as much as 37 cents more expensive. Indiana (+37 cents), Michigan (+32 cents), Ohio (+27 cents) and Illinois (+25 cents) are among the top 10 states in the country with the largest yearly increase.

Gasoline inventory built in the region for the fourth week, albeit it just adding 300,000 bbl. At 53 million bbl, inventories are in line with this time last year, according to the latest EIA report.

Florida (+9 cents) and Louisiana (+5 cents) not only lead the region with the largest increases on the week, but land on this week’s top 10 states with the biggest change in pump prices. New Mexico was the only state in the region to see no change on the week. At $2.29, Texas leads the region and the country with the least expensive gas price average. The highest gas price in the South and Southeast is found in Florida $2.54, which is 25 cents more a gallon than in Texas.

After two weeks of decreases, gasoline inventory built by 2.6 million bbl on the week. The increase was the largest of any region in the country. Total stocks sit at a healthy 84 million bbl.

After a substantial build the week prior, this week the Mid-Atlantic and Northeast region had a nearly 500,000 bbl draw on gasoline inventory. The 53 million bbl in total is typical for this time of year.

Gas prices in the Rockies region increased as much as four cents on the week: Utah (+4 cents), Idaho (+3 cents), Wyoming (+1 cent) and Montana (+1 cent). Colorado’s gas price average held steady at $2.43 on the week and is just one cent cheaper than this time last month. Whereas Utah’s gas price is six cents more expensive month over month.

Gasoline inventory remains above the 7 million bbl mark despite a small 64,000 bbl draw on the week, according to the EIA.

At the close of Friday’s formal trading session on the NYMEX, WTI dropped 58 cents to settle at $63.37. Oil prices slid after EIA’s latest petroleum report underscored that domestic crude production in the U.S. continues to grow. On the week, U.S. crude production increased by 258,000 b/d to 9.750 million b/d. Market observers are looking for indications that growth in the global crude market has slowed, but the U.S. has bucked that trend. In fact, U.S. producers are seizing the higher petroleum prices to grow global market share – evidenced by crude exports growing to 1.25 million b/d last week. That figure is up from the rate last year at this time, which stood at 704,000 b/d. This growth potentially stalls efforts by OPEC and major crude producers to rebalance the market (by cutting production through the end of 2018). However, market observers who are looking for indications that the crude market may tighten in the coming months were glad to see the number of active oil rigs in the U.S. declined by five last week. The total number of rigs now stands at 747.