March 4, 2019 --Oklahoma drivers are spending more at the gas pump today as the state falls from its typical ranking as among the 10 lowest states for gas in the nation. Averaging $2.23 a gallon, gas prices in the Sooner state are up 29-cents as compared to a month ago, the fifth largest increase in the nation.

Meanwhile, the national gas price average has increased nearly 20-cents since the beginning of the year, which is the largest jump during the January-February timeframe since 2015. Pump prices rose steadily across the country in February, a month that saw a number of refineries undergoing planned and unplanned maintenance, and an increase in crude oil prices.

“Pump prices have been pushed higher this week due to reduced gasoline stock levels and increased demand,” said Leslie Gamble, AAA Oklahoma spokesperson. “Motorists can expect gas prices to continue to increase as refineries gear up for spring gasoline production and maintenance season.” 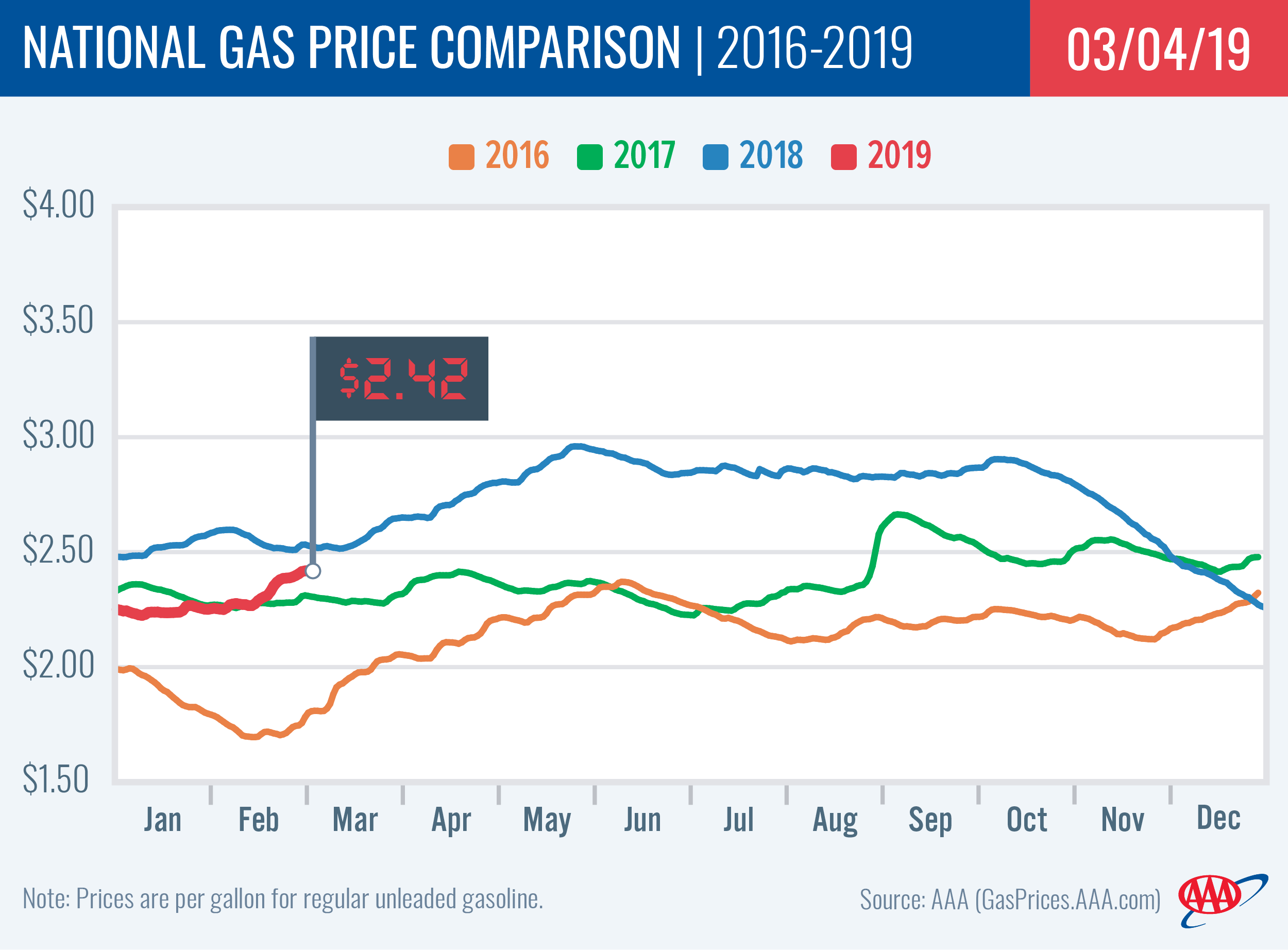 After two weeks of draws, gasoline inventories built by a healthy 1 million bbl to 68.6 million bbl, per Energy Information Administration (EIA) data. However, refinery utilization continues to trend down. In fact, utilization has fallen from the first of the year when it was at 87.9 percent to 60 percent today. Much of this can be pinpointed to ongoing planned and unplanned maintenance throughout the region. It’s likely that gasoline imports and lower demand (due to colder weather) has helped to keep gas price fluctuations moderate.

On the week, Indiana (-10 cents) and Kentucky (-1 cent) were the only states in the region to see gas prices decrease. In the rest of the region, gas price averages increased one to 10 cents, while gas prices range from $2.17 in Missouri to $2.47 in Illinois.

Regional inventories drew by 911,000 bbl on the week to drop to a total of 58.5 million bbl, according to EIA data. For a second week, refinery utilization increased, which is a promising sign for the region and likely helped to keep gas prices from jumping dramatically. Should inventories build and utilization remains positive, motorists could see fluctuating gas prices.

Gas prices are more expensive on the week for all states in the South and Southeast with half of the region landing on this week’s top 10 list of states with the biggest increase: Florida (+13 cents), Alabama (+11 cents), Louisiana (+8 cents), Mississippi (+8 cents) and Texas (+5 cents).

While gas prices have been increasing recently across the region, Florida ($2.47) has seen a huge jump (+31 cents) since the beginning of the year and carries the most expensive average in the South and Southeast region.

Gas price increases on the week can be attributed to the large draw in gasoline inventories in the region. EIA data shows stocks drew for a second week, this time by a staggering 2.1 million bbl, which measures total levels at 87.5 million bbl.

EIA data shows inventories increasing by 244,000 bbl in the Rockies region for a total of 7.7 million bbl. Without any large fluctuation in stocks, gas prices are likely to see only moderate fluctuation this month.

Motorists in the West Coast region are paying some of the highest pump prices in the nation, with most of the region’s states landing on the nation’s top 10 most expensive list. At $3.29, California and Hawaii are the most expensive markets. Washington ($2.87), Nevada ($2.83), Alaska ($2.79) and Oregon ($2.76) follow. Arizona ($2.42) is the only state in the region that dropped from the 10 most expensive markets list. Prices in the region have mostly increased on the week, with Hawaii (+3 cents) seeing the largest jump.

EIA’s recent weekly report showed that West Coast gasoline stocks fell slightly by 100,000 bbl. They now sit at 32.7 million bbl. Stocks are approximately 500,000 bbl higher than at this time last year, which could help stabilize prices if there is a supply challenge in the region this week.

At the close of Friday’s formal trading session on the NYMEX, WTI dropped $1.42 to settle at $55.80. Oil prices took a downward turn last week due to concerns that global crude demand may be lower than expected. Moving into this week, crude prices may rise on optimism that the United States and China are closer to a deal that resolves the ongoing trade spat between two of the world’s largest economies. Tightened global supply due to OPEC’s 1.2 million b/d production reduction agreement (which will be through June 2019) and decreased crude exports from Venezuela and Iran could also help prices increase.

Earlier last week, crude prices rallied after EIA revealed that domestic crude inventories decreased last week by 8.6 million bbl and now sit at 445.9 million bbl. The week-over-week reduction is the largest so far in 2019 and was driven largely by a robust crude export rate of 3.4 million b/d, which is more than double the export rate at this time last year. Additionally, the U.S. saw a low crude import rate at 5.9 million b/d last week, which is the lowest rate since February 1996. Low imports also contributed to lower crude inventory levels.

In related news, Baker Hughes Inc. reported that the U.S. lost 10 oilrigs last week, bringing the total to 843. When compared to last year at this time, there are 43 more rigs this year.