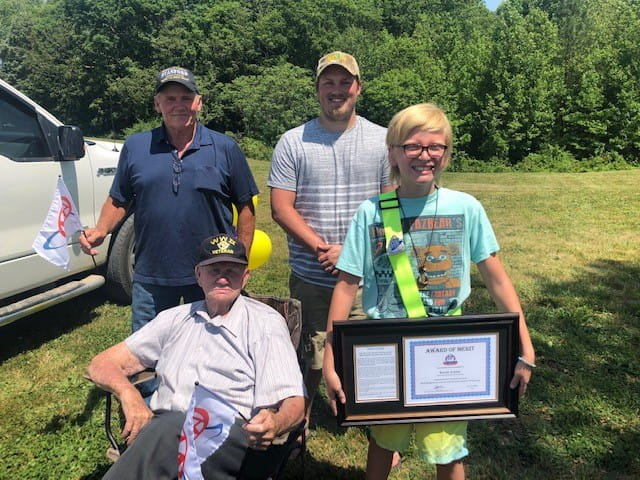 RICHMOND, VA (March 2, 2021)— For 100 years, AAA School Safety Patrollers around the world have provided school-aged children an extra sense of safety and security when going to and from school. As the COVID-19 pandemic spread across Virginia, Patrollers and their advisors had to pivot quickly to keep those programs going.

“The pandemic took many aspects of daily life away from students this year,” said Morgan Dean, AAA Mid-Atlantic spokesperson. “As it has through the past 100 years, the AAA School Safety Patrol program, along with its Patrollers and advisors, adapted and came up with new ways to make the program a success.”

Even through the disruptions of the past year, the AAA School Safety Patrol endures. AAA Mid-Atlantic was honored to take part in a socially-distanced, outdoor swearing-in ceremony at Beaverdam Elementary School in Hanover County last November. Twenty patrollers earned their belts and badges and got right to work making their school safer.

Created to help children learn to be safe while walking to school, the program has grown-up and matured with the times while remaining steadfast to its mission to provide a safer environment and leadership opportunities for millions of schoolchildren. Started as a boys-only initiative when horses and buggies were still a transportation mode, the program has evolved to include girls. The training that Patrollers receive instills safety sense beyond street crossings, including bus and car drop-offs, monitoring hallway congestion, and teaching Patrollers invaluable leadership skills. The famous Patroller belt has seen change, too, going from white to neon orange to today’s fluorescent green called ‘Lectric Lime.

“Patrollers direct children, not traffic. Their focus is on helping students be safe where traffic is concerned,” said AAA Traffic Safety Advocacy and Community Impact Manager Rhonda Shah. “Their actions save lives. Patrollers serve as role models in schools across the country.”

The program and its more than 440 Lifesaving Award recipients have contributed to the steady decline of U.S. student pedestrian (ages 5–14) deaths—a 24% decrease since 2010.

For some students, becoming a Patroller is inspired by wanting to help others and the privilege to wear the ‘Lectric Lime belt and badge proudly. For others, it is also a tradition passed on from generation to generation, like 14-year-old Kayo Cook from Hanover, Virginia, whose uncle, grandfather, and great grandfather all proudly served as Patrollers.

“It taught me how to be a leader,” Kayo Cook said. “It’s always good to be able to help others.”

They knew patrolling ran in the family, but they didn’t realize just how deep the roots went until all four generations gathered to celebrate Kayo as he was honored with a 2019-2020 Outstanding School Safety Patrol Award. They all served as patrollers at elementary schools in the Richmond metro area dating back to the late 1930’s when the now 91 year old Robert S. Stanford, Sr., donned the belt and badge at George Thorpe elementary. Not only did he have to teach his classmates about being safe around motorcars, he also had to teach them to listen for the sounds of Richmond’s now defunct electric trolley cars that ran a few blocks from the school.

The belt may come off after fifth grade, but the leadership values and safety awareness have inspired many to pursue admirable careers, including the sitting president.

Other notable Patrollers include Jimmy Carter and Bill Clinton, astronauts, governors, members of Congress, Supreme Court justices, Olympic medalists, and authors, like Diary of a Wimpy Kid Jeff Kinney. Many Patrollers now serve as educators, executives, and community leaders. Some, like Karen Guilbeault, enter law enforcement. Guilbeault rose to become the first female captain in the Cranston, R.I., police department and their first to graduate from the FBI’s National Academy in Virginia.

“Being a patroller helped me get involved in community service and gave me a sense of belonging and instilled self-confidence,” said Guilbeault. “It opened so many doors for me and formed my interest in going into law enforcement.”

The 2020–21 school year, different as it may be, boasts 679,000 Patrollers in 35,000 schools in the United States. The legacy doesn’t stop here, however. Over the last 100 years, interest in and excitement for the program have spread around the world. The AAA model has been adopted in at least 30 other countries, including England, France, Germany, the Netherlands, and New Zealand.

Since 1920, AAA provides various equipment and education materials to Patrollers, including reflective belts, patrol badges and training resources. To learn how to bring the AAA School Safety Patrol to your school, email SchoolSafetyPatrol@national.aaa.com.