Pictured above: Laguna Grande in Fajardo is the closest place to San Juan to experience kayaking in bioluminescent waters.
Photo By OMVRK

Kayaking through the dark, I dip my paddle into the murkiness below. Immediately, the water around my boat glows electric-blue, mesmerizing me until the light disappears just seconds later. In front of me, a needlefish skims the water, leaving a blue glow in its wake every time it surfaces, while the outline of a school of ballyhoo illuminates as the fish swim nearby. It sounds like the stuff of science fiction, but on the tropical island of Vieques, Puerto Rico, it’s just another night on Puerto Mosquito (Mosquito Bay).

Centuries ago, the indigenous Tainos believed that stars were born in this mystical body of water before making their way up to the sky. And while there’s still an element of the glow that feels like magic, science has since explained how it works.

Microorganisms in the water, called dinoflagellates, emit light in response to movement, creating a phenomenon called bioluminescence. The effect is not unique to Vieques; you can see it in two other bodies of water on mainland Puerto Rico: in the north at Laguna Grande in Fajardo, not far from the capital of San Juan, and in the south at La Parguera in Lajas. The phenomenon also exists in places such as Jamaica, Indonesia and even in parts of the US, depending on conditions and time of year. But none of these locales can compete with Puerto Mosquito, which holds the Guinness World Record as the brightest bioluminescent bay on the planet. 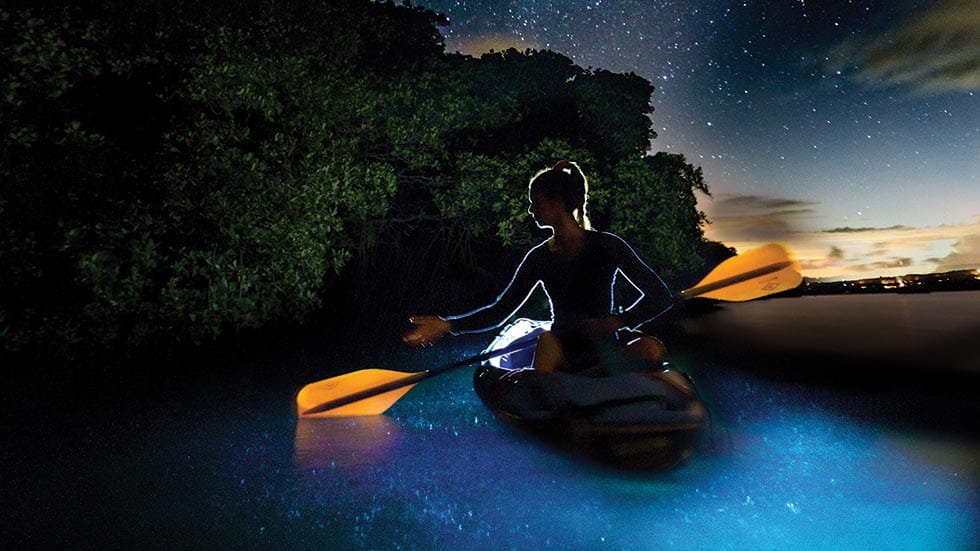 Mosquito Bay in Vieques, Puerto Rico, was recognized for having “the brightest bioluminescence in the world” by Guinness World Records in 2006.
Photo By Karl Alexander

DO I HAVE TO GO WITH A LICENSED GUIDE?
In short, yes. Puerto Rico’s Department of Natural and Environmental Resources (DRNA) regulates the number of boats and people allowed in the bay on any one night. Licensed operators such as Taino Aqua Adventures and Bieque Eco Trips adhere to rules put in place to protect not just the ecosystem but also tour-goers’ safety. A handful of rogue, unlicensed guides offer bio bay trips, so make sure that you’re signing up with a legitimate company. When you book your reservation, you’ll be given a designated meeting time and place where you’ll join the group and board a van for a short and bumpy (but fun) ride to the bay.

IS THERE A TIME OF THE YEAR WHEN THE GLOW IS BRIGHTEST?
One of the factors that makes Puerto Mosquito so special is Vieques’ relatively stable yearround conditions, so which season you visit doesn’t have much effect on the experience. Nevertheless, be sure to look at the lunar calendar before booking your trip. Tours are not offered the day before, of and after the full moon.

HOW SHOULD I PREPARE?
Since there’s a good chance that most restaurants will be closed by the time your excursion finishes, grab a light dinner before your tour. During the adventure, you won’t be allowed to get out of the boat and swim in the bay, but you’ll definitely get wet, so keep that in mind when deciding what to wear. If you’re going to use bug spray, it should be eco-friendly (deet-free) so as not to harm the marine life. Most operators do not provide towels or water, so bring them with you. And, of course, carry cash to tip your guide.

CAN I TAKE PHOTOS?
Until recently, capturing bioluminescence on camera required specialty equipment and a working knowledge of photography, but today, most smartphones can record the effect. Hold on to your phone tightly, though; if you drop it in the water, you can’t jump in to save it.

WHAT ELSE CAN I DO ON VIEQUES?
So much! Vieques boasts dozens of spectacular beaches, so whether you prefer to lounge under a palm tree with a frosty piña colada, snorkel with sea turtles or ride the waves on a surfboard, you’ll find the perfect place to do it. You can also spend your time exploring the Indiana Jones-like ruins of an abandoned sugar mill, riding horses along a black sand beach, learning about the island’s history at the Fortín Conde de Mirasol Museum, and feasting on seafood so fresh it was swimming in the ocean just a few hours earlier.