MORE THAN A RIBBON OF ROADWAY, US ROUTE 66 IS AN AMERICAN CULTURAL TREASURE THAT PROMISES ADVENTURE

The US is a nation built around the automobile, with undulating ribbons of pavement providing the runway for classic road trips. But of all the roadways snaking across this vast country, none has captured the imagination quite like US Route 66. Called the “Mother Road” by John Steinbeck as it was traversed by the Joad family in his Pulitzer Prize-winning novel The Grapes of Wrath, the route has inspired songs, movies and a TV series.

What is it about a simple thread of concrete and macadam that has become so much a part of the American zeitgeist? 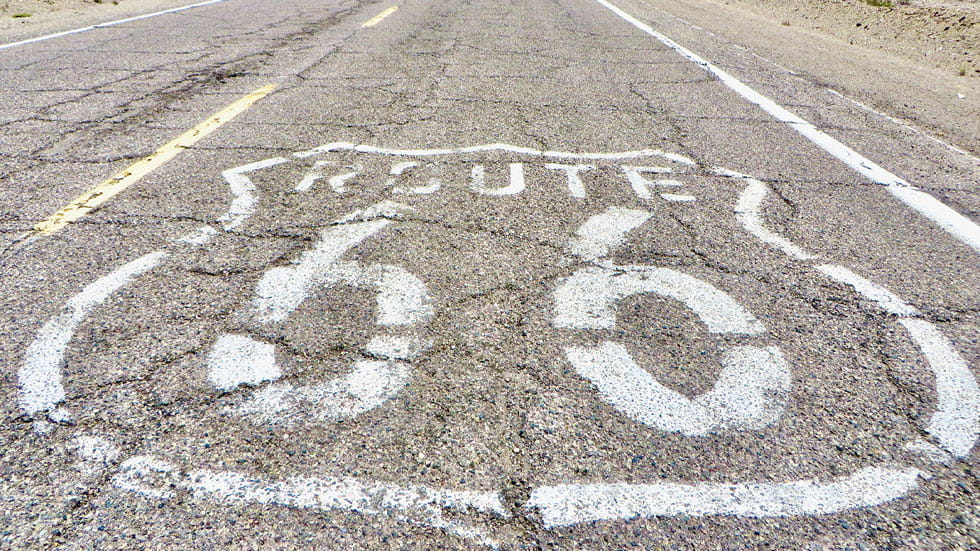 A ROAD IS BORN
Route 66 was officially designated in 1926 at a meeting of highway officials in Springfield, Missouri. Despite that prosaic start, the 2,400-mile expanse—from the skyscraper canyons of Chicago through the deserts of the Southwest to its end at the Pacific Ocean at the Santa Monica Pier—has long symbolized freedom and opportunity.

While Route 66 is now a popular tourist destination, particularly for those seeking a vanishing mid-century Americana vibe awash with glowing neon signs pointing the way to retro roadside motels, it hasn’t always been this way.

As the major route from the Great Lakes to the Pacific Ocean, the road’s creation put dozens of towns on the map—way stations during the Great Depression for weary travelers heading west in search of a better life. Bruce Springsteen references this longing in his song “The Ghost of Tom Joad”—a nod to Steinbeck’s Grapes of Wrath—about people down on their luck seeking the promised land. 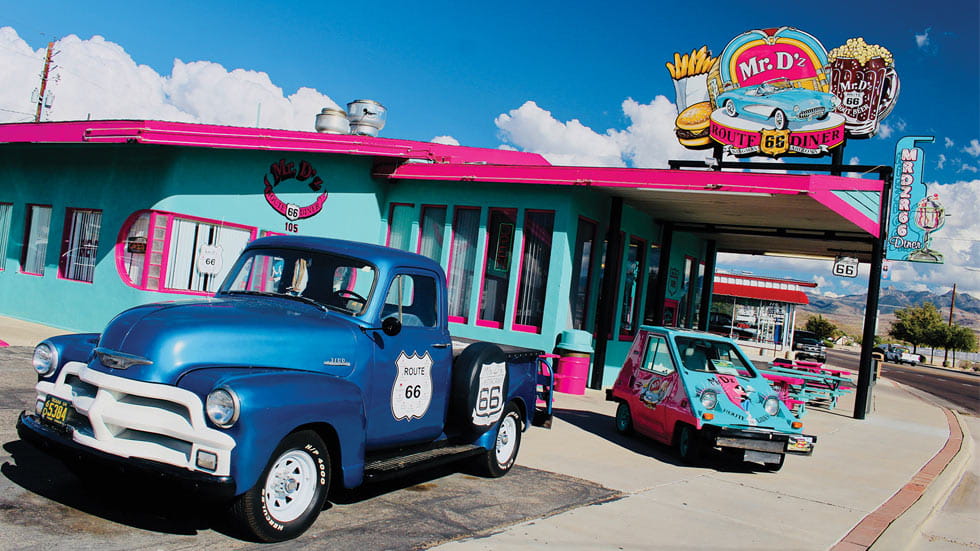 The post-World War II years led to a major boom for Route 66, spurred on by Nat King Cole’s release in 1946 of the now-legendary Bobby Troup-penned song “(Get Your Kicks On) Route 66.” Thousands of returning veterans pursued opportunity in California, while a growing wave of newly mobile tourists explored national parks such as the Grand Canyon and the Petrified Forest in Arizona. The allure of this highway was further heightened by the Route 66 TV series, which aired from 1960 to 1964.

But cracks in the pavement—and the road’s mystique—were inevitable. The advent of the Interstate Highway System in the 1950s sounded the death knell for many two-lane roadways, and much of the Mother Road was sidestepped by four-lane superhighways. By the early 1970s, Route 66 had gone from a place to “get your kicks” to remnants of road with a giant “kick me” sign on its back. The towns along its way—and commerce in them—suffered.

But Americans love a comeback story, and Route 66’s began in Seligman, Arizona. When the town was bypassed in 1978 by Interstate 40, local business owners refused to throw in the towel and lobbied the state to declare the 90-mile still-intact stretch of Route 66 from Seligman to Kingman, Arizona, a Historic Highway. Today, Seligman lays claim as the “birthplace of Historic Route 66,” signifying the road’s transition from a national artery to a historic journey. 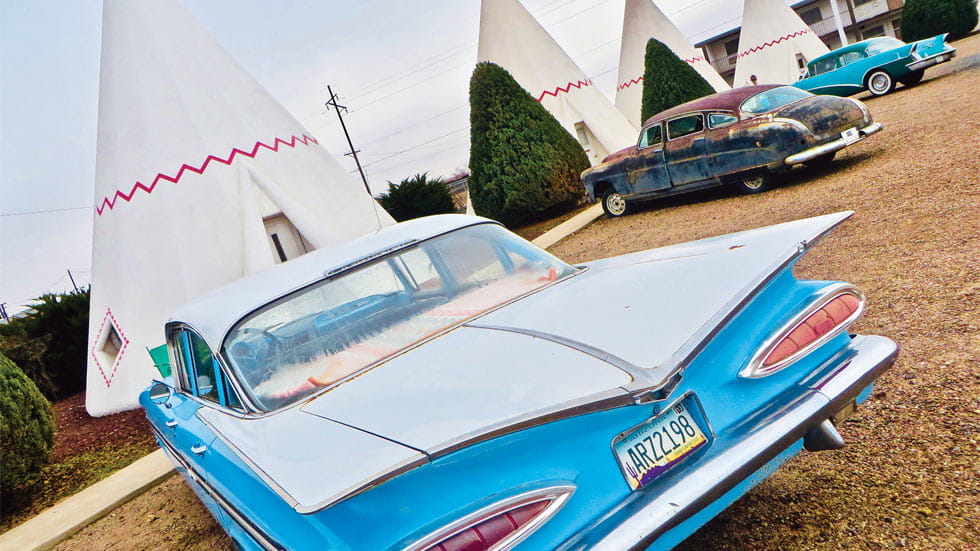 Classic cars are parked outside each tipi at the Wigwam Motel. Photo by Michael Milne

A ROAD COMES OF AGE
Today, a trip down Route 66 is less about reaching a destination than enjoying the experiences along the way. In Springfield, Illinois, savor a crunchy corn dog on a stick at the birthplace of this deep-fried treat: the Cozy Dog. In Holbrook, Arizona, spend the night nestled in a tipi at the historic Wigwam Motel.

Mickey Mantle’s hometown of Commerce, Oklahoma, welcomes hungry road warriors to gobble down Route 66-themed cookies at the Dairy King, housed in a 1931 former Marathon service station. Afterward, stop for a photo op across the street in front of the fluorescent green 1929 Allen’s Conoco Fillin’ Station, which was built right into the brick wall of the adjacent building. 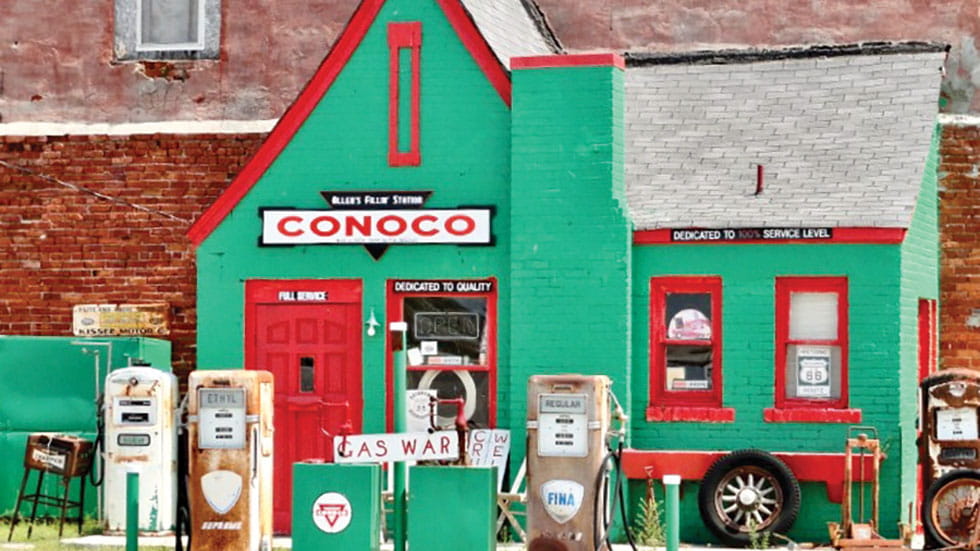 Farther along in Amarillo, Texas, let your inner Picasso run wild with a can of spray paint at Cadillac Ranch, where 10 vintage Cadillacs are jammed nose down into the ground, providing a canvas for budding artists. (Yes, spray painting the cars is allowed.)

These days, scores of Route 66-themed restaurants and shops laden with souvenir T-shirts and coffee mugs may give the impression that this trip is now the place to “get your kitsch.” But amid the endless vistas of the Great Plains or under the starry desert skies of the Southwest, you may still pass travelers pursuing their dreams along the Mother Road as they seek their ticket to the promised land.

The Mother Road turns 100 in 2026, but we’re not waiting to start celebrating. AAA is hosting the first-ever AAA Route 66 Road Fest in June 2022. Taking place in Oklahoma City, June 18–19, and in Tulsa, June 25–26, the Road Fest will offer live music, interactive exhibits, vintage cars and much more. For details on the 2022 Road Fest, visit Route66RoadFest.com.

You can help aid the resurgence of Oklahoma’s portion of the Mother Road through the AAA Route 66 Revival Fund. This fund has been established to support development and improvement projects—such as signage, walkability, beautification, street lighting and bike lanes—in Oklahoma’s Route 66 communities from the Kansas border to the Texas Panhandle. For more information on the fund, visit route66revival.org. 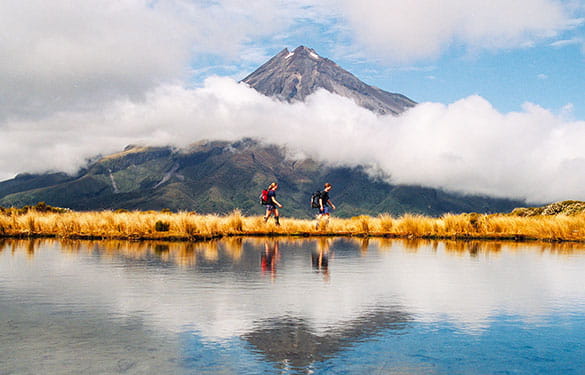 What To Expect At America’s National Parks This Year

Do You Know How To Prepare Your Car For A Road Trip?