MUCH OF AMERICAN HISTORY CAN BE UNDERSTOOD AS A MARCH TOWARD FREEDOM. BUT WHOSE FREEDOM?

Much of American history can be understood as a march toward freedom. But whose freedom? That answer has broadened over the years to include men and women and people of all races and origins. The march toward freedom continues today. When Captain John Smith landed on the shores of Virginia, his colony claimed lands where native people had lived for centuries. Enslaved Africans were brought in for labor. These early actions at Jamestown and the modern Fort Monroe led ultimately to the Civil War, with its long sieges and blood shed on all sides and, finally, to the end of slavery. The long road to freedom also had nonviolent victories, including an African-American woman making a fortune before she could even vote, and then setting up a bank for her people. 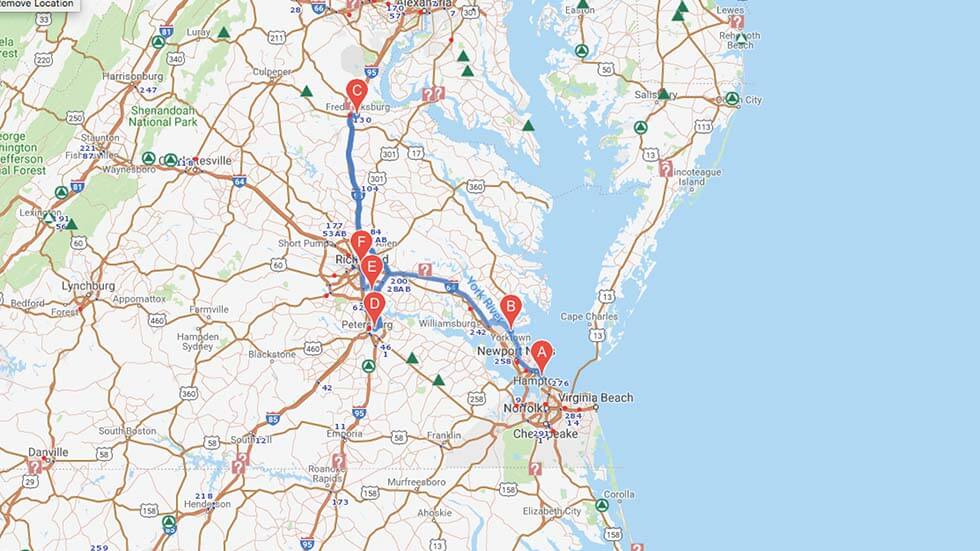 FEE FREE SITE; The Casemate Museum serves as a visitor center and has a seasonal operating schedule. Check the park’s website or call ahead for building hours. 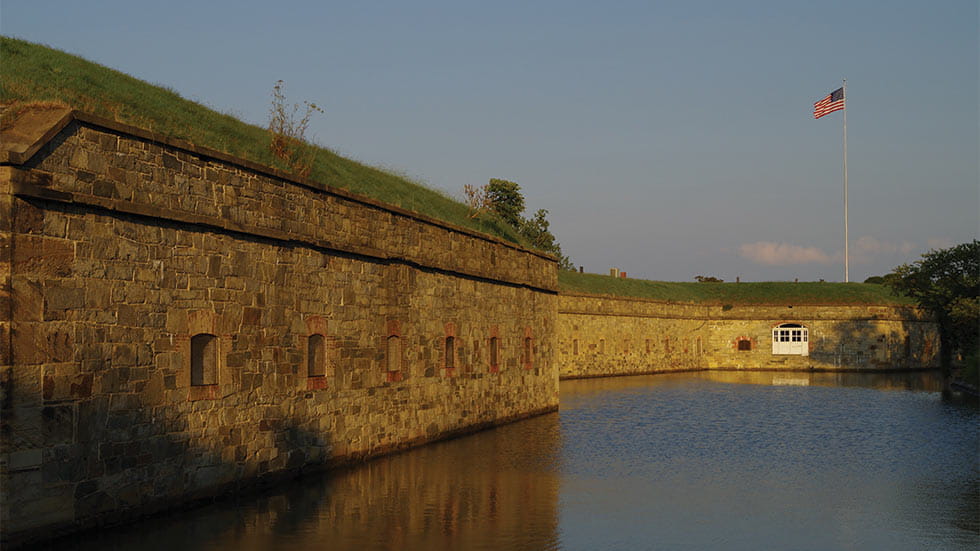 Fort Monroe National Monument spans the American story starting before European settlement and continuing today: a home to Native American peoples, the backdrop for Captain John Smith's journeys, a safe haven for freedom-seekers during the Civil War, and a bastion of defense for the Chesapeake Bay. This newly-named National Park Service site has begun a public planning process to determine its future, but you can visit now.

MORE: The best way to explore “Freedom’s Fortress” is on foot. Walk the ramparts encircling the top of the largest stone fort ever built in the United States. Discover its strategic location and importance in the defense of the Hampton Roads Harbor and the Chesapeake Bay. Look across the water to Fort Wool and see how the geography of Old Point Comfort was vital to the coastal defense strategy of the United States. The Fort Monroe peninsula has been home to thousands of military families over two centuries, with scenic streets and historic homes. Key features include: Building #1; Quarters No. 1; Building #50; Building #17, Lee’s Quarters; Casemate Museum; Chapel of the Centurion; Old Point Comfort Lighthouse; Parade Ground.

INSIDER TIP: Today Fort Monroe is a home and workplace just as it was during the period of active military service. Please respect residents’ privacy as you explore.

FUN FACT: Despite being the largest stone fortress ever built in the United States and a Union stronghold within a seceding state during the Civil War, Fort Monroe has never received nor fired a shot in hostility. Fort Monroe earned the name “Freedom’s Fortress” during the Civil War. Union General Benjamin Butler determined that any enslaved man who reached Union lines would be considered “contraband” of war and not returned to bondage. This decision paved the way for the Confiscation Act of 1861, the Emancipation Proclamation, and freedmen’s service in the United States armed forces. 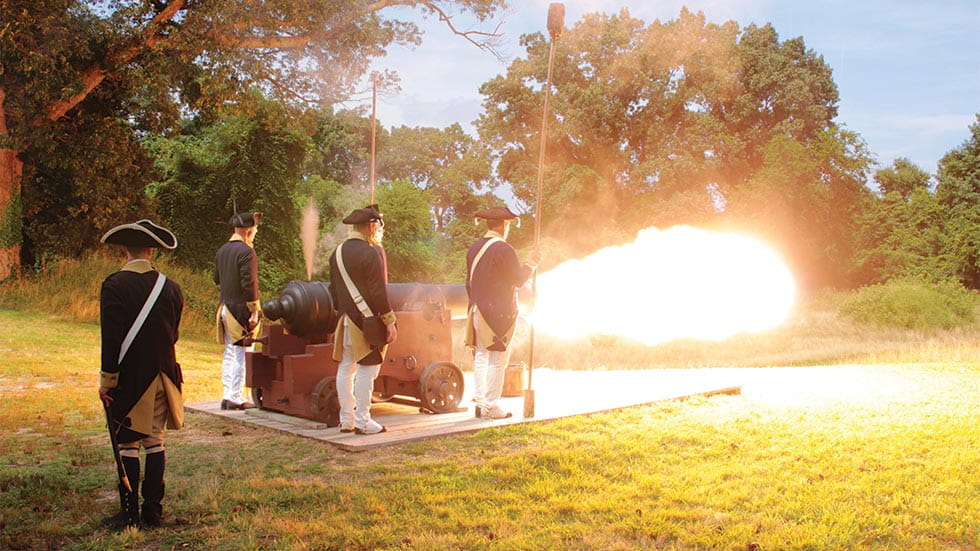 Fee: Beginning January 1, 2019, the entrance fee at Yorktown Battlefield will increase to $10 per person. Visitor Center: Open daily 9 AM to 5 PM. All park grounds are closed at sunset. Park is closed Thanksgiving, Christmas, and New Year’s Day.

INTRO: In 1781, combined French and American forces prevailed against the British Army on these fields, securing American independence. The British surrender at Yorktown marked the end of major fighting in the American Revolution as a peace treaty was negotiated in Paris.

MORE: Colonial National Historical Park includes both Yorktown and Jamestown, the first permanent English settlement in North America. This itinerary focuses on the Yorktown section. To see Jamestown as well, follow theColonial Parkwayto the eastern half of the park. It will take you through Williamsburg, which has its own interesting sites!

TheYorktown Trolleyis a transportation serviceprovided by York County. It travels throughout the village of Yorktown from the Yorktown Battlefield to the Yorktown Victory Center, as well as several stops in between, including Riverwalk Landing on a seasonal basis.(NOTE: The trolley does not drive the Yorktown battlefield tour roads.) Trolley buses are handicap accessible.

Ask whether informal tours are available for the National Cemetery Lodge, Nelson House and Moore House.

FUN FACT: After spending most of the war as General George Washington’s aide-de-camp, Lieutenant Colonel Alexander Hamilton finally got his chance to lead soldiers on the battlefield in the Revolution’s final battle. He commanded a light infantry battalion under Lafayette’s Division. He was breveted to colonel before his discharge the following year, as Washington’s army headquartered in Newburgh, New York, awaiting a peace treaty before they disbanded. Hamilton later served as the nation’s first Treasury secretary. 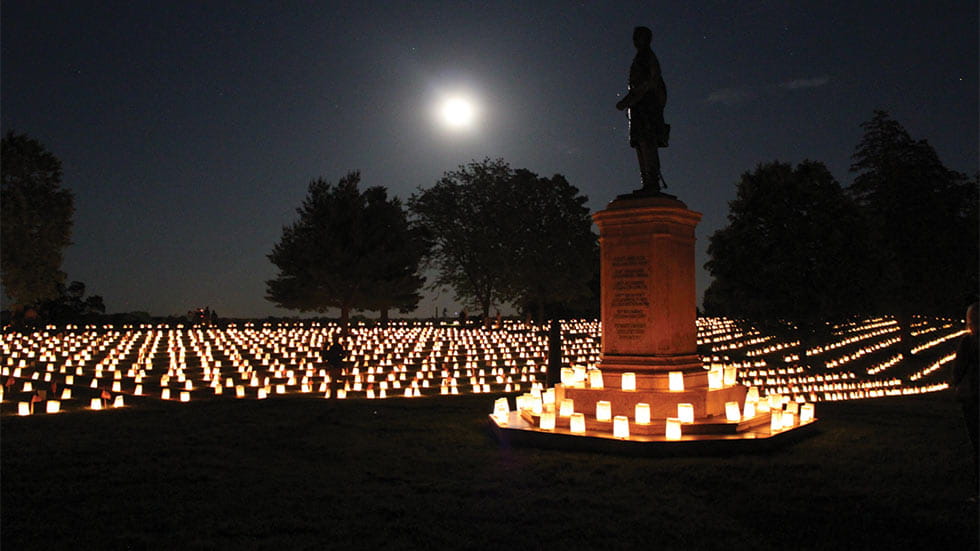 INTRO: This is the bloodiest ground in North America. Throughout eighteen months of the Civil War, the Union and Confederate armies sustained 100,000 casualties in the fields and forests around Fredericksburg. Soldiers fought in four major battles, Fredericksburg, Chancellorsville, the Wilderness, and Spotsylvania Court House. Civilian homes and lives were transformed forever by war, and thousands of enslaved people crossed Union lines to freedom.

MORE: Fredericksburg and Spotsylvania National Military Park encompasses 8,000 acres in four counties, with two visitor centers, two exhibit shelters, and several historic structures. Fully experiencing the park takes at least a day, and each battlefield has its own driving tour. Check the website for a list of guided tour times, or see the 22-minute orientation films at both visitor centers.

INSIDER TIP:  Chatham Plantation was a residence for two hundred years, with history spanning from the colonial era well into the twentieth century. For over ninety years, Chatham’s enslaved residents sought freedom through various means. The house rose to national significance as a headquarters and field hospital for the Union Army during the Battle of Fredericksburg.

FUN FACT: Do you have an ancestor who served during the Civil War? Employees at both visitor centers have resources to help trace the footsteps of individual soldiers.

INTRO: Imagine an American city under siege for nine and a half months. During the Civil War, the city of Petersburg was a vital supply depot for the Confederacy, with five railroad lines twenty-five miles from Richmond. The siege of Petersburg from June 1864 to April 1865 was the longest military event of the Civil War and resulted in 70,000 casualties. Freedmen who enlisted in the United States Colored Troops faced heavy combat during this campaign.  By spring, General Ulysses S. Grant had cut off all of Petersburg's supply lines, ensuring the fall of Richmond on April 3, 1865. Six days later, General Robert E. Lee surrendered his Army of Northern Virginia at Appomattox Court House, effectively ending the war.

MORE: Petersburg National Battlefield is a large park with several different components. GPS users can find coordinates for the places most people visit at www.nps.gov/pete/planyourvisit/directions.htm.

Start your tour at the Eastern Front Visitor Center and see where the Union Army made their first major attack on the City of Petersburg. This visitor center is stop 1 of an 8-stop driving tour and has an introductory video. The four mile, one-way tour road takes visitors to other battle sites including the Battle of the Crater and Fort Stedman. Self-guided walking trails include wayside exhibits and allow visitors to walk the same grounds where soldiers fought. 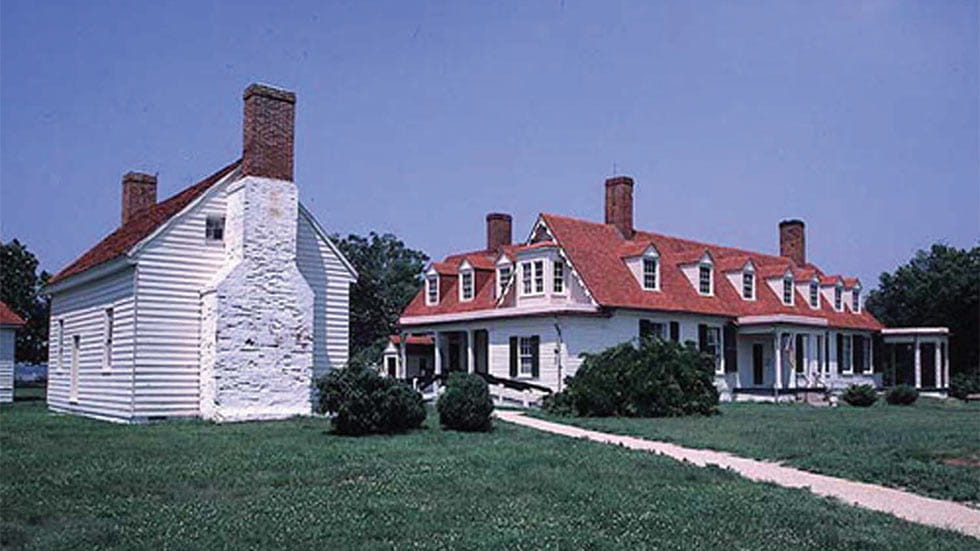 Then drive to General Grant Headquarters at City Point (open seasonally). This is the former plantation home of Dr. Richard Eppes and 122 enslaved laborers. After a 15-minute video, visitors can tour the Eppes Family Home and Appomattox Plantation and see how the war changed the lives of the free and enslaved people who lived here. Visit the cabin where General Grant stayed while headquartered at City Point.

INSIDER TIPS: The battlefield is a great place to explore both history and nature. The James River, near General Grant’s Headquarters, has a number of eagle nests located nearby; eagles like to perch in the large trees. The Eastern Front Unit has approximately 10 miles of nature trails. Hikers, runners and bicyclists can enjoy the beautiful sights and sounds of a central Virginia forest, and perhaps see some deer, turkey, fox or bald eagles.

What is “The Crater”? On July 30, 1864, Union forces detonated four tons of black powder underneath a portion of the Confederate defensive line. The attack resulted in 300 Confederate soldiers dead and wounded. The following Union assault, disorganized and poorly led, was not able to take advantage of the chaos in the newly-formed Crater.  The blast left a huge pit in the earth, still visible today at Tour Stop 8 on the Eastern Front.

FUN FACT: President Lincoln met with Generals Grant and Sherman and Admiral Porter onboard the River Queen steamship on March 28, 1865 at City Point. During this meeting, the President made clear how he wanted the surrender of General Robert E. Lee’s Army of Northern Virginia to be handled. Those instructions were carried out 12 days later at Appomattox Court House. 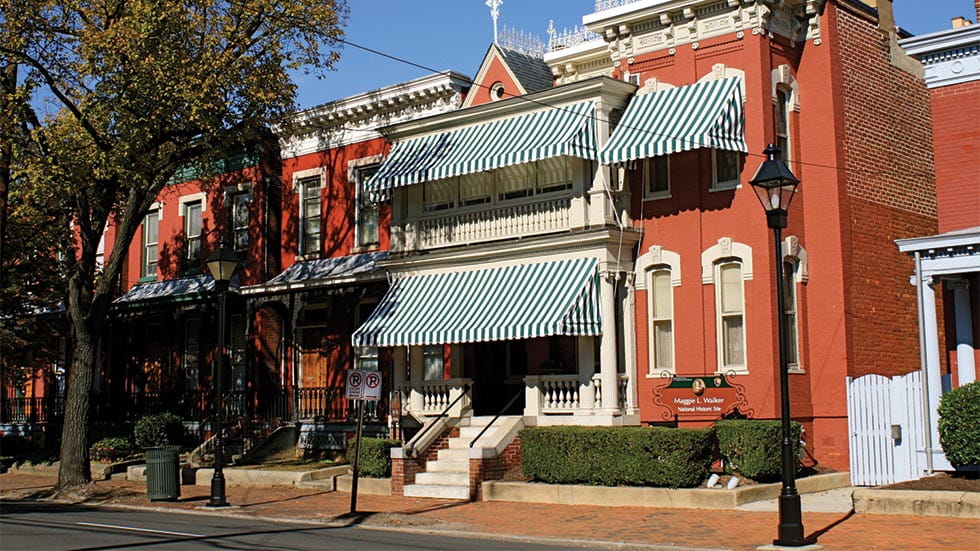 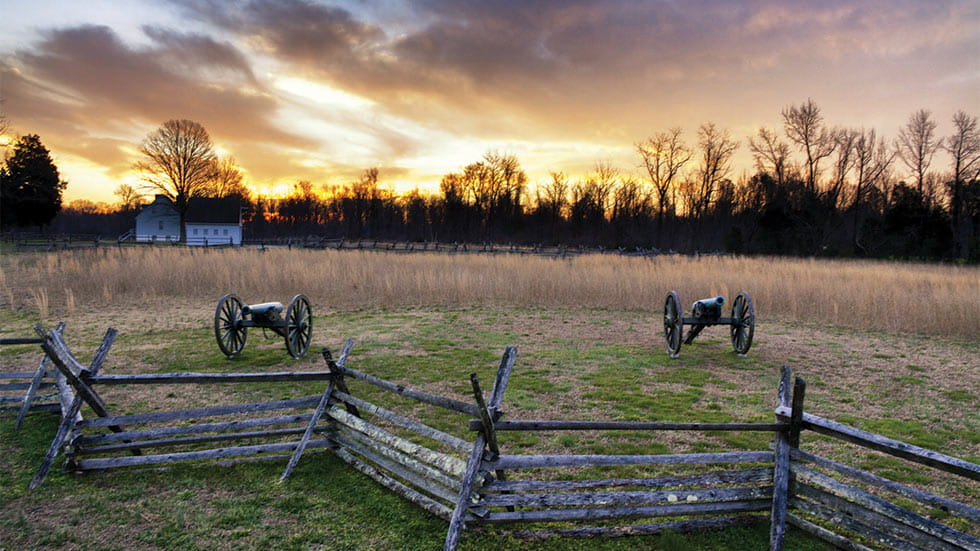 Explore the now-serene natural settings of places that witnessed major actions in our country’s most brutal conflict. Richmond's stories include a naval battle, a key industrial complex, the largest hospital of the Confederacy and dozens of miles of elaborate original fortifications. See the evocative spots where determined soldiers adapted to a new style of warfare, reaping a staggering human cost. Learn about urban slavery, the causes of the Civil War, and wartime deprivations in the Confederate capital.

MORE: Richmond National Battlefield Park has several components in and around the city of Richmond and in Henrico, Hanover and Chesterfield counties. To experience the entire battlefield park requires a full day. A driving tour of the battlefields outlined on thepark mapincludes 13 separate sites with four visitor centers along an 80-mile route. Visitors can explore famous battlefields such as Cold Harbor, Gaines' Mill and many more.

Begin your tour at the Civil War Visitor Center at Tredegar Iron Works in downtown Richmond.

INSIDER TIP:  Malvern Hill is considered one of the best-preserved Civil War battlefields in all of Virginia. Today the battlefield offers a 1.5 mile trail with sweeping views across the fields where Union and Confederate forces once clashed.

FUN FACT:  The USS Monitor fought at Hampton Roads against the CSS Virginia (also known as the Merrimack) in the first battle between iron warships. But did you know that the crew of the Monitor would fight their last battle at Drewry's Bluff in May 1862? The ship went down in a storm that December.

FEE FREE SITE; Open Tuesday through Saturday year round from 9 AM to 5 PM.

The child of a former slave, Maggie Lena Walker was born in Richmond when it was still the capital of the Confederacy. Walker devoted her life to economic empowerment and civil rights during the era of Jim Crow segregation. As a bank president, newspaper editor, and fraternal leader, Walker served as an inspiration of pride and progress to Richmond’s African-American community. Today, Walker’s home is preserved as a tribute to her enduring legacy of vision, courage and determination.

MORE: The home of Maggie L. Walker, located in the Jackson Ward National Landmark District, is now preserved by the National Park Service. The home is furnished with many of her original family items. Together the house and furnishings help us to learn more about Maggie Walker and the world in which she lived in the early 20th century. A guided tour allows visitors to understand her incredible legacy.

INSIDER TIP: Be sure to check out Google Cultural Institute’s online exhibits about Maggie L. Walker and get an up-close virtual look at some of the furnishings in her home:  www.google.com/culturalinstitute/beta/partner/maggie-l-walker-national-historic-site