BEFORE THE DAYS OF RAILROADS OR AUTOMOBILES, NEW YORK STATE ROLLED UP ITS SLEEVES AND STARTED DIGGING.

Before the days of railroads or automobiles, New York State rolled up its sleeves and started digging. In the words of a popular song, the Erie Canal connected “every inch of the way from Albany to Buffalo.”  A ‘carrying place’ that had served six nations for centuries became an outpost for Europeans colonizing North America and, then, a place where rebels stood their ground against an imperial army. Women gathered to proclaim to the world that they deserved the right to vote as much as any man. Our youngest president ever assumed office in a friend’s home after an assassination by an anarchist. 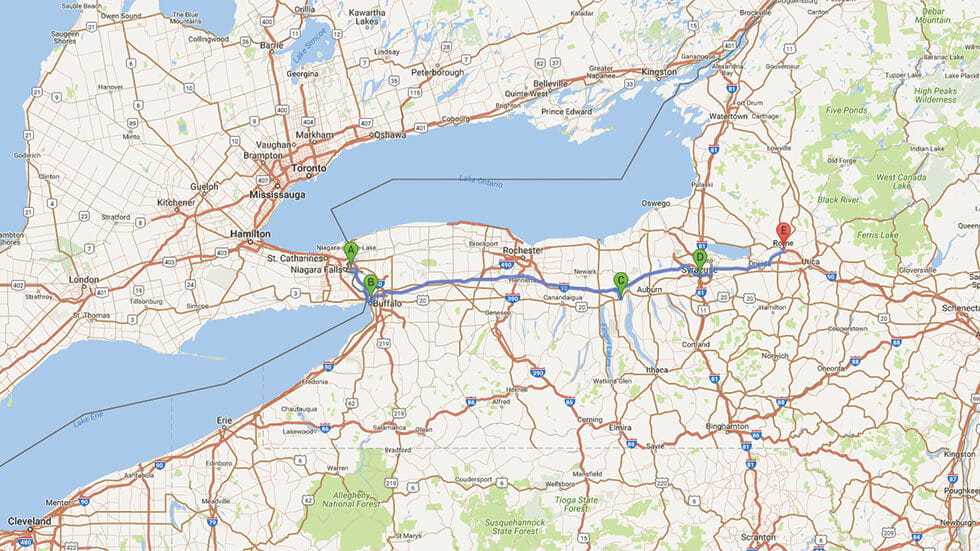 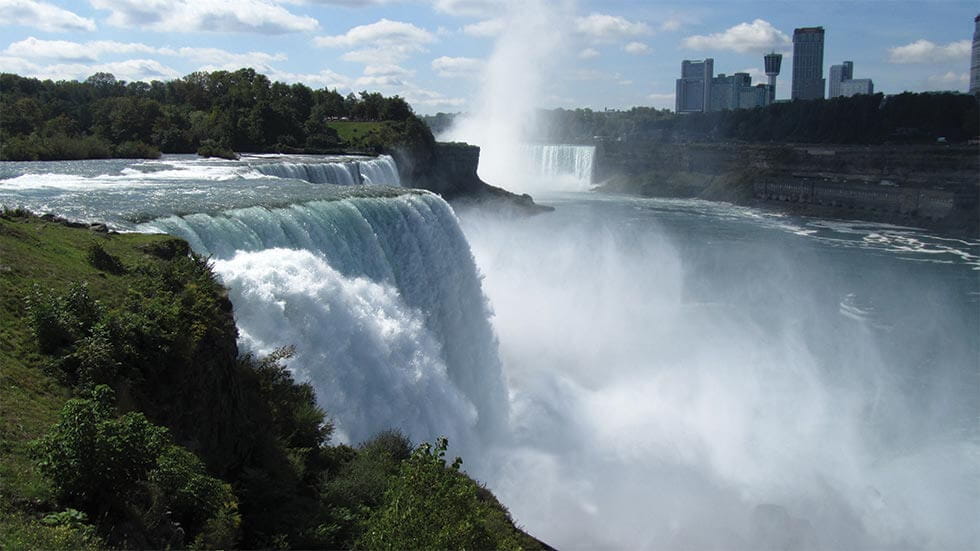 FEE FREE SITE; The Niagara Falls National Heritage Area receives visitors year-round, however in the winter months some of our sites have limited hours or may be closed. The Discover Niagara Shuttle, our hop-on/hop-off transportation service, operates from Memorial Day until October, daily from 9:00am until 7:00pm.

INTRO: Niagara Falls is one of the most dramatic waterfalls in the world. One-fifth of all the fresh water in the world is connected to this dramatic setting that has lured lovestruck couples and death-defying daredevils for centuries. Begin your travels with a visit to this iconic site and feel the power of the water.

While not a National Park Service site, Niagara Falls has its own National Heritage Area that includes one city, two towns, two villages, a host of parks, sites and attractions along the Niagara River. The “Falls to Fort” region offers the world-famous Niagara Falls, a variety of heritage tourism activities, quaint village shops and restaurants, a downtown tourism area and a variety of outdoor activities including boating, fishing and hiking. From the War of 1812 to its role as a nexus in the Underground Railroad and a catalyst of the hydroelectric power, Niagara has been and continues to be of critical importance.

MORE: Eight million people a year visit Niagara Falls State Park. At the oldest state park in the United States, designed by landscape architect Frederick Law Olmsted, people can experience the rush of Niagara’s waters by strolling through the park, crossing idyllic bridges, or touring world class attractions like the Maid of the Mist and Cave of the Winds.

In nearby Youngstown, New York, Old Fort Niagara has dominated the entrance to the Niagara River since 1726. The fort played an important role in the struggles of France, Great Britain, and the United States to control the Great Lakes region of North America, and also helped shape the destinies of the Iroquois (Six Nations) peoples and the nation of Canada. Today Old Fort Niagara is a National Historic Landmark and New York State Historic Site. Find out more: www.oldfortniagara.org. 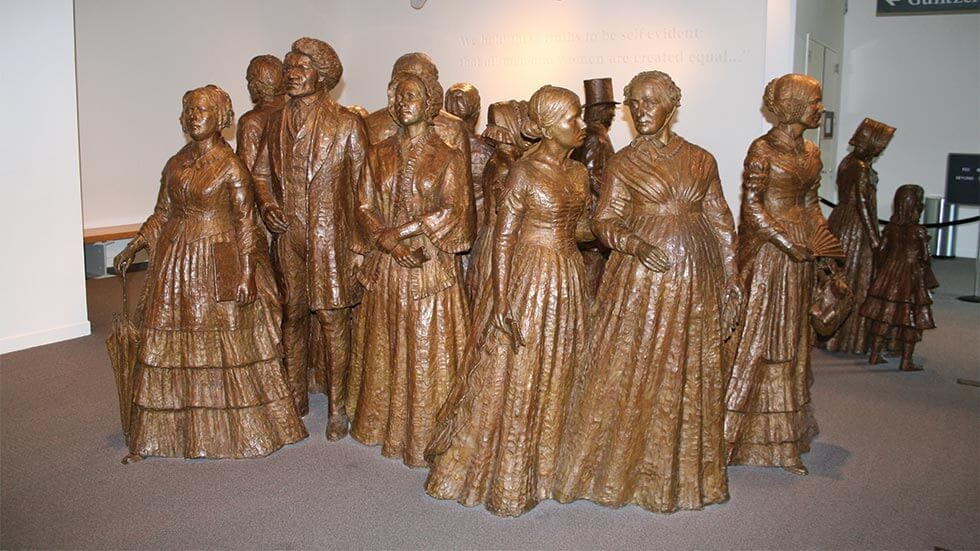 Visits are by guided tour only. Open daily with varying hours; check http://www.trsite.org/visit/plan-your-visit. Fees: adults $10, $7 for students and seniors, $5 for children 6-18, young children free. Family (2+ adults and all children): $25.

INTRO: Theodore Roosevelt brought excitement and vigor to the presidency. He preserved the environment, created protections for ordinary citizens, began regulation of big business, and made the US a major force in international affairs. Yet he began his presidency during a moment of national mourning—the murder of his predecessor, William McKinley, shot during Buffalo’s Pan-American Exposition.

Roosevelt arrived in Buffalo and stayed with his friend Ansley Wilcox. In this home a brief, emotional, improvised ceremony began an energetic, powerful presidency. Here you can follow in the footsteps of our 26th President: hear his thoughts about the challenges confronting the nation, and learn how he left an indelible mark upon the nation.

MORE: Free off-street parking is available behind the TR Site and is accessible from Delaware Avenue or Franklin Street. Franklin Street is one-way northbound and cannot be accessed from North Street. On-street, metered parking is also available on Delaware Avenue. Several downtown streets are one-way, so be careful before you turn. If at all possible, it is recommended that persons with mobility-related disabilities be transported in a smaller vehicle that can access the parking lot, and enter from the rear, where an accessible entrance is available.

FUN FACTS: At first, it looked like President McKinley would recover from his wounds. Roosevelt had come to Buffalo after the shooting and stayed with Wilcox, but left when McKinley seemed out of danger. Joining his family on a vacation to the Adirondacks, Roosevelt was climbing a mountain when a messenger came up the trail to tell him to return to Buffalo.

To this day, Theodore Roosevelt is the youngest president in our nation’s history. He was six weeks shy of his 43rd birthday.

This was one of only four times in American history when a Presidential oath of office was administered outside the capital city. 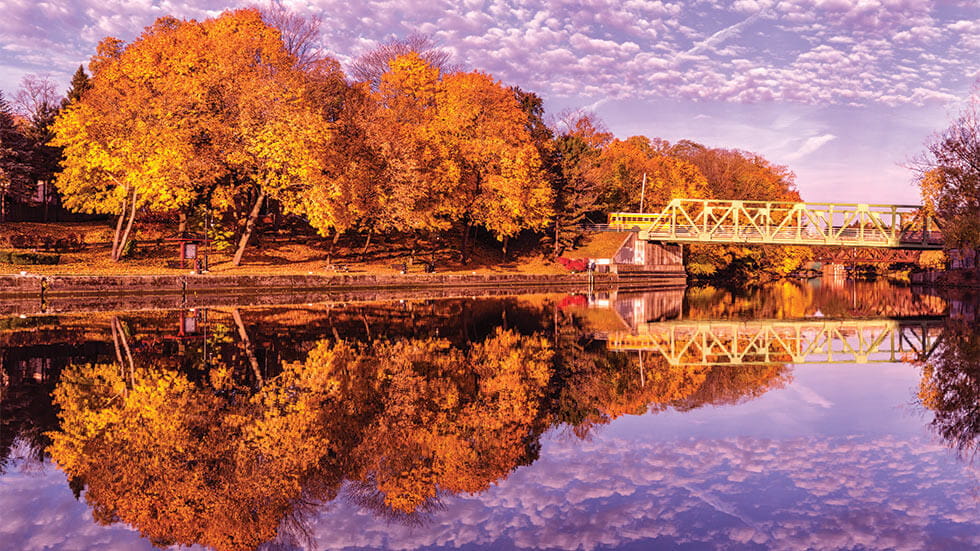 “…all men and women are created equal.” What a radical idea! The Women’s Rights Convention gathered here for two hot days in July 1848, where one hundred women and men signed the Declaration of Sentiments. The convention was held in the Wesleyan Chapel in Seneca Falls, three miles east of Waterloo. This event was not the first time the rights of women had been discussed in American society, but it was a vital step toward equality for women in the United States.

The Declaration of Sentiments also called for equal educational opportunities, the right to property and earnings, the right to the custody of children in the event of divorce or death of a spouse. It was the demand for the right to vote, however, which caused the most controversy.

MORE: Begin with a stop at the Visitor Center. Then proceed to Wesleyan Chapel, site of the First Women’s Rights Convention, where the Declaration of Sentiments was approved. Each year, on the third weekend in July, the park holds a three day celebration in honor of the 1848 Women’s Rights Convention with speakers, activities, concerts, and boat tours along the Cayuga-Seneca Canal.

Walk with a ranger to the home of Elizabeth Cady Stanton, a primary author of the Declaration, along the town’s quaint main street and beautiful scenery overlooking the Cayuga-Seneca Canal. Self-described as a “caged lioness,” the Stanton House served as the early hub of the women rights movement as Stanton herself juggled raising seven children, writing speeches and petitions, and hosting some of the most renowned reformers of the time. Sit at the table in her parlor and add your thoughts. If you have time, visit the M’Clintock House in nearby Waterloo, where the Declaration of Sentiments was drafted.

INSIDER TIPS: On Sundays during the summer, visitors can bring their kayak, or rent one locally, and join a park ranger on a tour of the Cayuga – Seneca Canal. The tour floats past historical sites and locks through one of the only double lock chambers in the Erie Canal system, before entering the base of Montezuma National Wildlife Refuge.

FUN FACTS: Every December, the park collaborates with the It’s a Wonderful Life Museum, to celebrate the famous movie which speaks to the value of each person. Seneca Falls is believed to be director Frank Capra’s inspiration for the movie and is known as “the Real Bedford Falls.”

HAVE A LITTLE EXTRA TIME? Consider these additional sites: 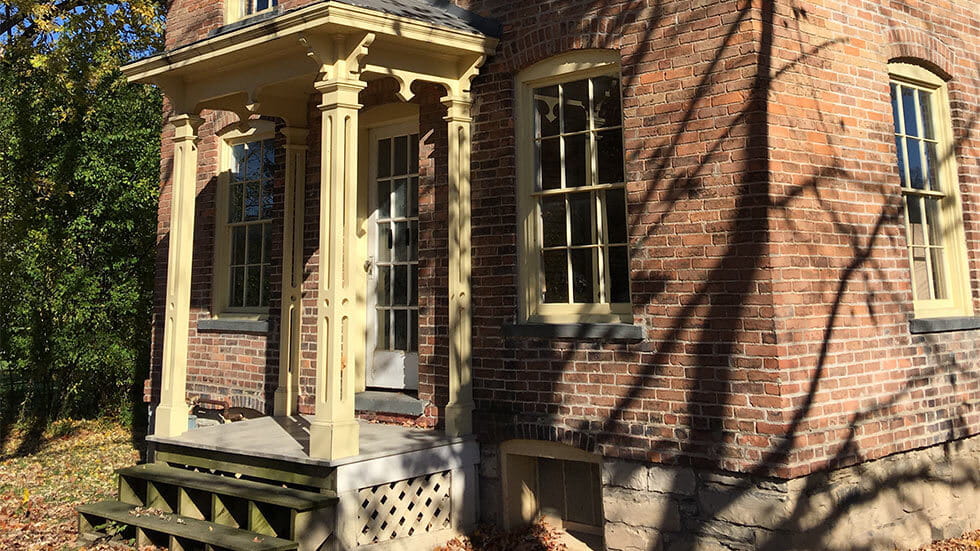 INTRO: For nearly two centuries, people have been “digging” the Erie Canal. When it opened in 1825 it served as the spine of a new age of commerce and industry. Once a vital highway of commerce, the canal is now a recreational attraction and a historic testament to American knowhow.

MORE: Home to the only remaining canal weighlock building in the U.S., the Erie Canal Museum shares two centuries of Erie Canal and U.S. history through hands-on exhibits, interactive displays, narrative audio tracks and original artifacts. Step inside the 19th century canal weighlock to see where barges were weighed and assessed tolls. Check out a full-size replica canal boat and enjoy education exhibits including a tavern, pottery business, general store and garden. The Museum also serves as the Syracuse Heritage Area Visitor Center and is open seven days a week, so begin your trip to Syracuse here!

Key Features and Major Points of Interest include: 1850 National Register Weighlock Building with canal boat weigh chamber; Erie Canal exhibits and artifacts; mule and driver monument on the original Erie Canal towpath; "Run the Weighlock" video game that gives visitors an opportunity to calculate the weight of boats that would have come through the weigh chamber during navigation season.

INSIDER TIP: Erie Canalway National Heritage Area includes hundreds of miles of attractions along the Erie Canal. They also have driving itineraries of their own. Find out more at www.eriecanalway.org/. 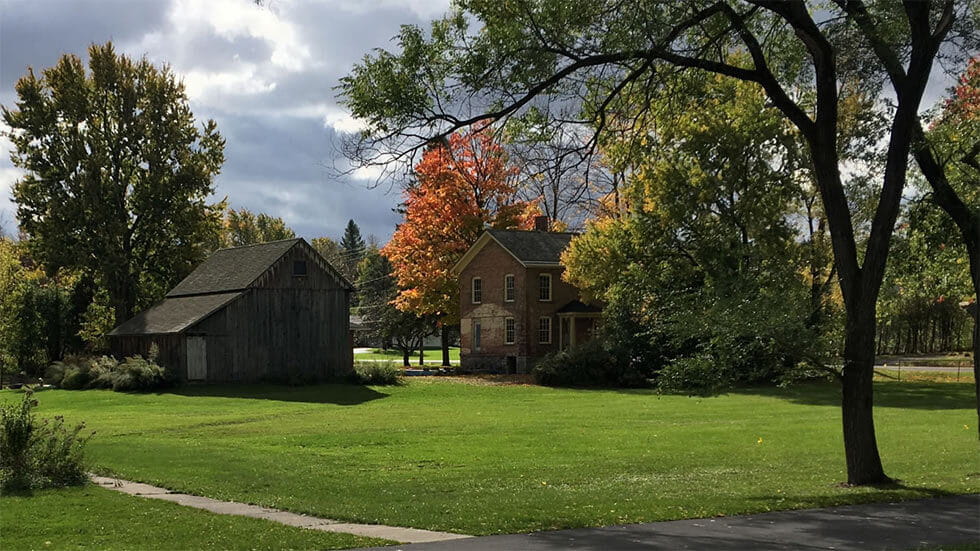 INTRO TEXT, top of page: Visitors to Fort Stanwix National Monument can “step back in time” to the 18th century when opposing loyalties divided communities, neighbors and families in the Mohawk Valley.  Join a ranger- guided program or explore on your own to discover why the fort was built and what life was like during the American Revolution.  Immerse yourself in the stories of the people that lived, worked and fought at Fort Stanwix while sampling daily life at the fort. Try out a bed, put on a soldier’s uniform, sit in a colonial boat, practice with a training rifle or carry water buckets with a yoke.  Choose your side and find out if you have what was needed to survive during wartime on the New York frontier. 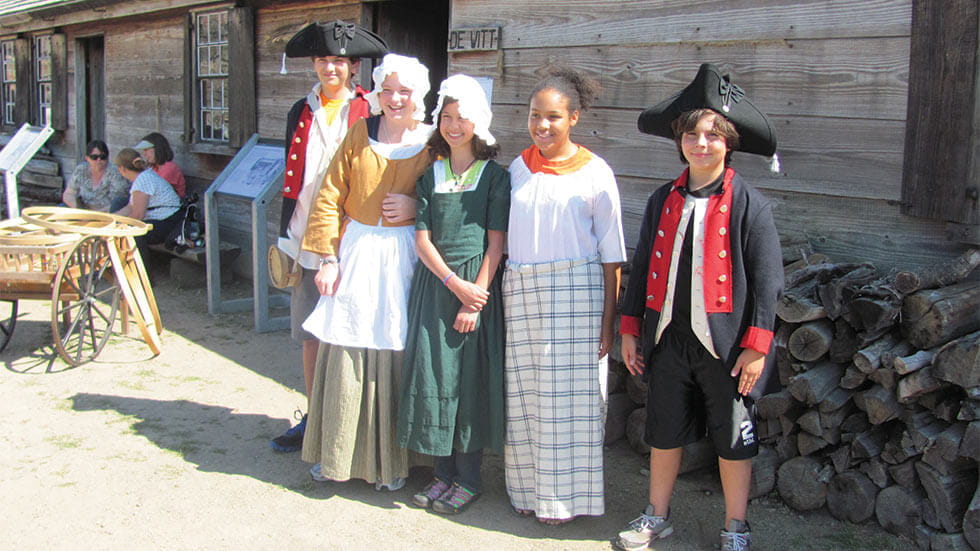 MORE: For thousands of years the ancient trail that connects the Mohawk River and Wood Creek served as a vital link for people traveling between the Atlantic Ocean and Lake Ontario. Travelers used this well-worn route through Oneida Indian territory to carry trade goods and news, as well as diseases, to others far away. When Europeans arrived they called this trail the Oneida Carrying Place and inaugurated a significant period in American history--a period when nations fought for control of not only the Oneida Carrying Place, but the Mohawk Valley, the homelands of the Six Nations Confederacy, and the rich resources of North America as well. In this struggle Fort Stanwix would play a vital role.

Known as "the fort that never surrendered," Fort Stanwix, under the command of Col. Peter Gansevoort, successfully repelled a prolonged siege, in August 1777, by British, German, Loyalist, Canadian, and American Indian troops and warriors commanded by British Gen. Barry St. Leger. The failed siege combined with the battles at Oriskany, Bennington, and Saratoga thwarted a coordinated effort by the British in 1777, under the leadership of Gen. John Burgoyne, to take the northern colonies, and led to American alliances with France and the Netherlands. Troops from Fort Stanwix also participated in the 1779 Clinton-Sullivan Campaign and protected America's northwest frontier from British campaigns until finally being abandoned in 1781.

INSIDER TIP: Don’t miss the only original part of the fort still in existence, a fireplace foundation that was constructed in 1758 and is carefully preserved in place where it was uncovered during the archeological dig.

FUN FACTS: Remembered today for his later betrayal of the cause of American independence, General Benedict Arnold was still fighting bravely on the American side when he helped end the 21-day British siege.

During the British siege of the fort, the American garrison constructed and flew an early version of an American flag.