SEEKING DIRECTION, LIFE ADVICE, AND A GOOD MEAL ON THE MOTHER ROAD

I say this in all seriousness: all my life, I’ve had a set direction with every turn carefully mapped out. In fact, a recent leadership training at work documented my systematic, detailed, over-planning nature. It was a harsh reality to see that in print, dusted by the crumbs of my granola bar, recognizing how challenging it is for me to be spontaneous. As it turns out, all of my planning never truly led me to where I wanted to be. Or most importantly, what I wanted to eat. In desperate need of a moment of detachment and escape from the everyday, I wondered: what if I removed the destination from the equation and surrendered to what I was craving in the moment? 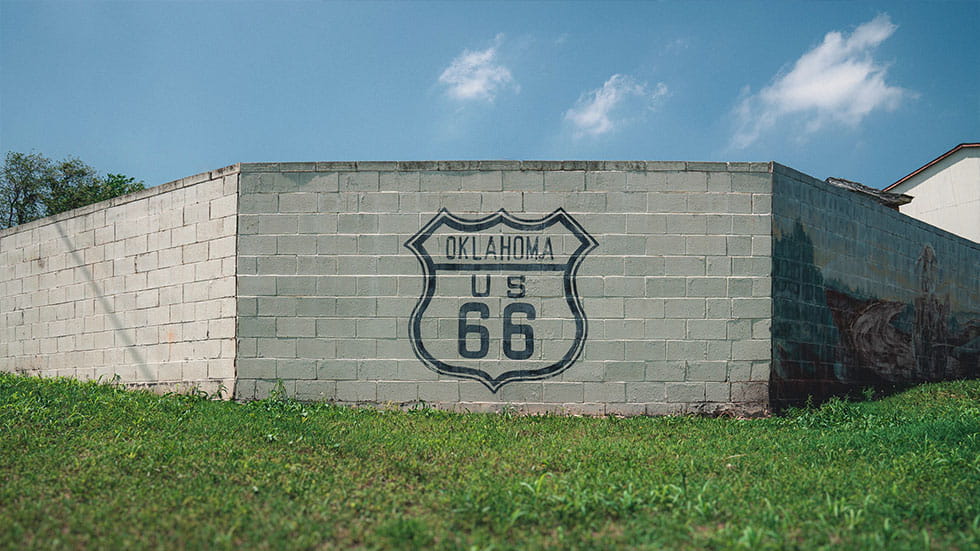 Hitting Oklahoma’s own Route 66 with and empty stomach and a full tank. Photo by Boston Heath.

In a moment of spontaneity, I decided to cruise Route 66 along the lush rolling hills of Oklahoma and Missouri with both a full tank and an empty stomach. With my appetite as my copilot, I was determined to experience and taste all the Mother Road had to offer with no plans or expectations. 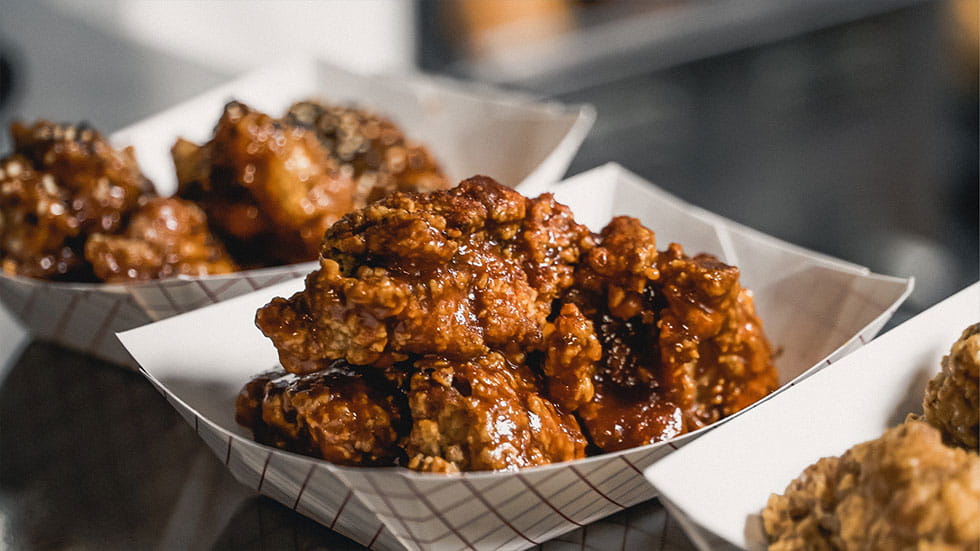 I followed my growling stomach to a little hole in the wall that happened to be a portal to chicken wing Nirvana – Chick ‘N Beer in Oklahoma City. I met the owner, Truong Le, who reminded me that all you need are wings and beer to be truly fulfilled. Just make sure those wings have an Asian twist. Their best-selling wing flavor is Gochujang, a flavor that is the Korean version of "sweet and spicy." The double-fried Korean-style wings are a fan favorite and quickly became my favorite, too.

“It’s a cult following at this point when it comes to that flavor,” remarked Le. “And that’s why one of our shirts is called ‘Gochujang Gang.’”

As the proud new owner of a 'Gochujang Gang' shirt with a belly full of some of the best wings I have ever tasted and instructions on removing all the meat from a flat wing in one bite, I gained some life advice that confirmed my direction.

“The moves that I’ve made have always been what I felt was right, and that has always led me in the right direction,” Le shared. “And you know, sometimes that means that you’ve got to be selfish about yourself.” 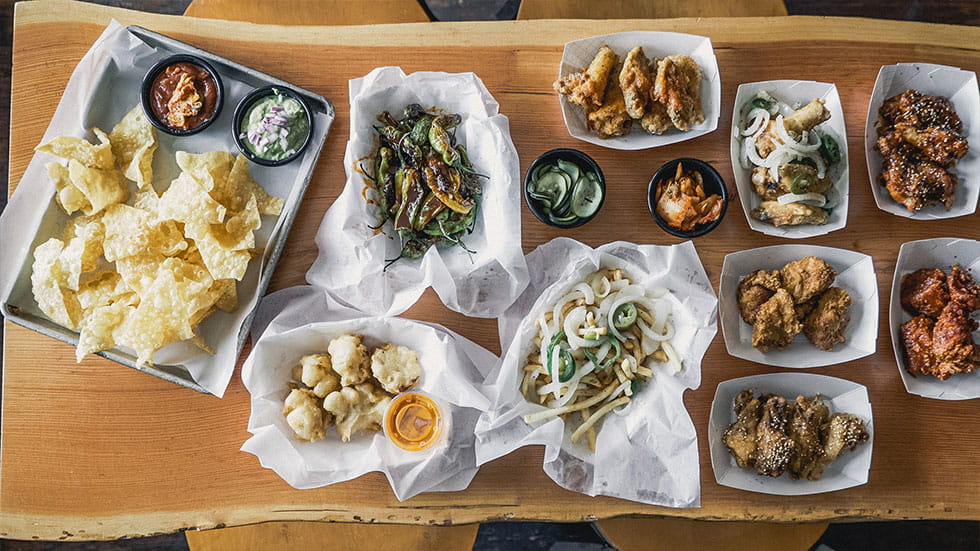 From wonton nachos to bone-in or boneless wings, Chick ‘N Beer has plenty of options to tempt your taste buds. Photo by Boston Heath.

So, I was selfish about myself. And ordered another batch of wings. And a side of wonton chips.

I was feeling good about my Chick ‘N Beer stop. But also stuffed. So, I decided to stretch my legs and fill up on some Route 66 novelty instead. I hopped out of the car in the small towns that dotted the Mother Road. I inspected the iconic Phillips 66 station in Chandler, explored the oddities of an antique store in Stoud, and continued my journey to Tulsa to see the larger-than-life Buck Atom outside of Buck Atom’s Cosmic Curios. 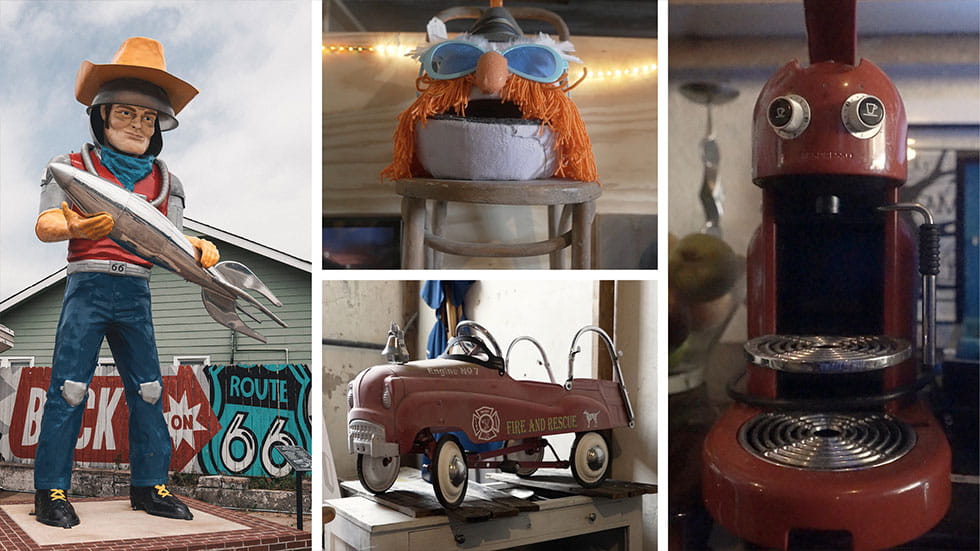 Left: In the heart of Tulsa, Buck Atom’s Cosmic Curios brings the authentic Route 66 experience to life. Center and right: Route 66 is full of roadside oddities like these. Photos by Boston Heath.

I was finally feeling relaxed, no longer worried about deadlines or expectations. On a walk around town, I followed the sounds of harmonious piano chords echoing off the walls of the downtown buildings to seek answers to life's bigger questions. I found Ryan MacMillan tickling the ivories. He was on a similar journey searching for meaning, discovering the vacant streetside piano as he scooted around town on a Lime scooter. He shared some sage advice with me.

“Don’t worry about the past or the future. Instead, just go for it where you’re at because there’s a lot of things around you that you can be missing otherwise,” he shared. 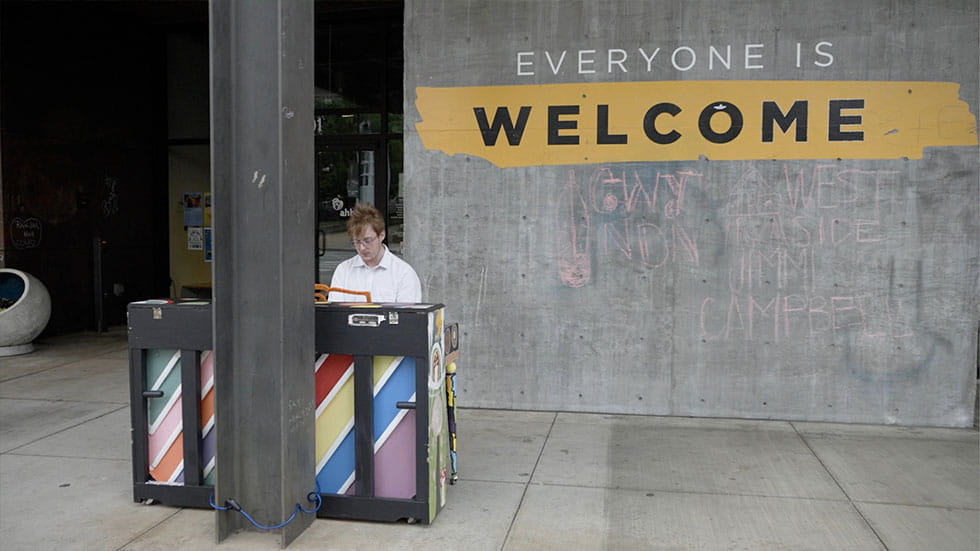 He had a point, and I decided to give in to exactly what I was feeling at that moment. Tired. But gas station coffee wasn’t going to solve the problem. I followed the road to the best latte in town at Shades of Brown on the opposite side of town.

Max Genzer, barista at Shades of Brown, is a coffee connoisseur and had plenty of caffeine recommendations for me.

“I like a good coffee or espresso,” they shared. “And then I also like a really sweet oat milk lavender iced latte. Lots of ‘shades of brown,’ if you will.” 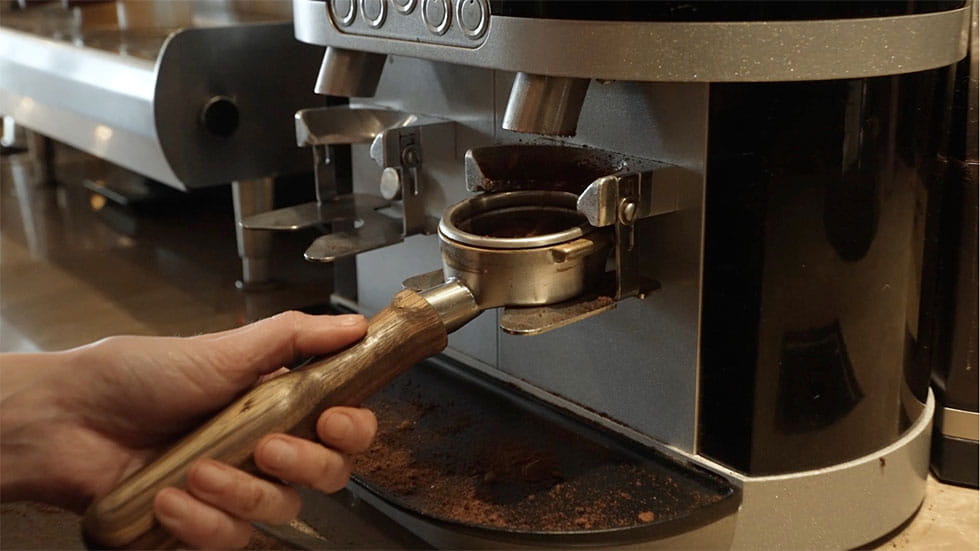 Shades of Brown in Tulsa is a top local spot for a latte, espresso, or coffee. Photo by Boston Heath.

Not only did I get a fresh cup of coffee, but Max shared some fresh perspective.

"Don't make it perfect, make it now," they advised. "I would say the meaning of life is to make your own meaning because I think that existence is absurd and there is no inherent meaning to it. I think that the whole point is to build our own meaning." 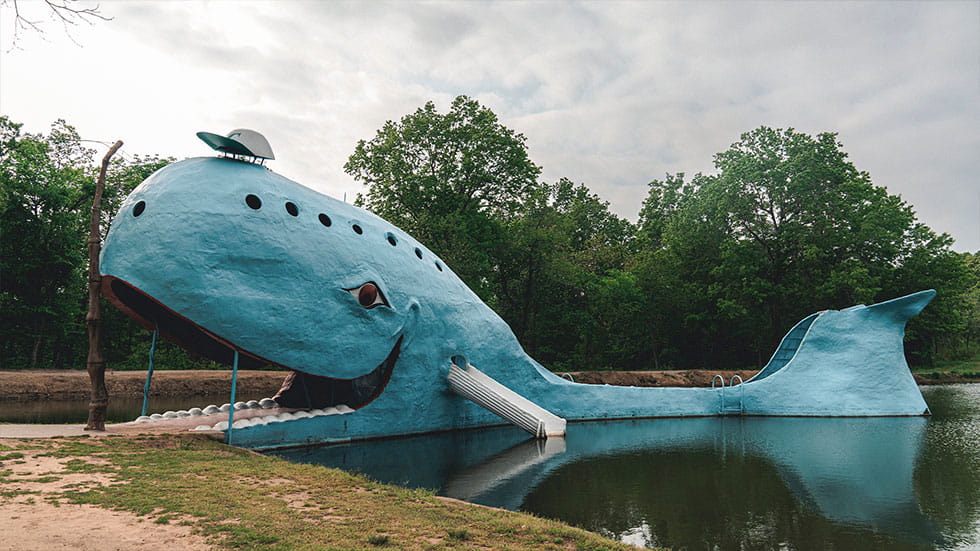 It was just what I needed to hear. There was no time like the present to abandon the rules I had always forced myself to follow and instead follow my heart. To a giant blue whale. A giant blue whale built by hand that has served as a dual-purpose swimming hole and piece of art over the years. According to Park Director Liz Huckleby, the whale is a local treasure visited by people from around the globe. She had all of the facts about the blue whale, and she had some facts about life, too.

“Stay open to the possibilities and stay flexible,” she advised. “You never know what to expect.”

I didn't know where I was heading next. Still, I followed Huckleby’s advice and trusted the universe would send me a sign, and hopefully some Skittles to hold me over my as I headed east. After passing fields of grazing cattle through the easternmost portions of Oklahoma alongside Route 66, I stopped at the glow of the neon lights outside Wilder’s Steakhouse in Joplin, Missouri. 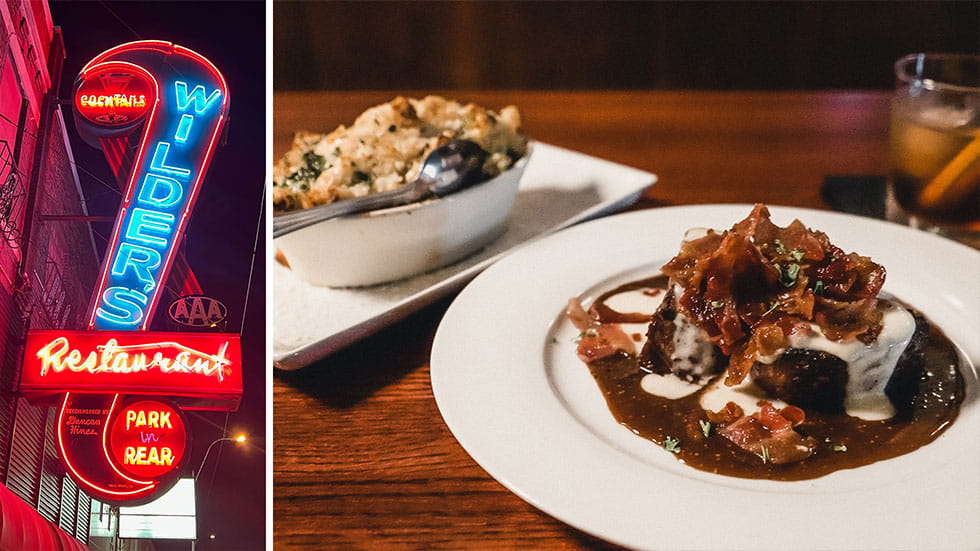 Left: The Wilder’s Steakhouse sign is visible blocks away on Route 66 in Joplin.  Right: A filet at Wilder's, coated in asiago cream sauce and bacon, paired with truffle mac and cheese. Photos by Ben Young and Boston Heath.

According to owner Marsha Pawlus, the neon sign on top of the building was meant to drive travelers along Route 66 to the famous steakhouse that sits just blocks south of the Mother Road. Dating back to the 1930s, Wilder's has a colorful history of bootleg liquor, gambling, the Kansas City mob, and a bomb that destroyed the rooftop sign. As I took in the historic building while devouring a mean filet drenched in asiago sauce paired with truffle mac and cheese, bartender Maggie Hilton served a hearty helping of life advice, too.

“Give hugs, give forgiveness, and never go to bed angry,” she shared. “The destination always changes, so you have to make the most and adapt on your journey.” 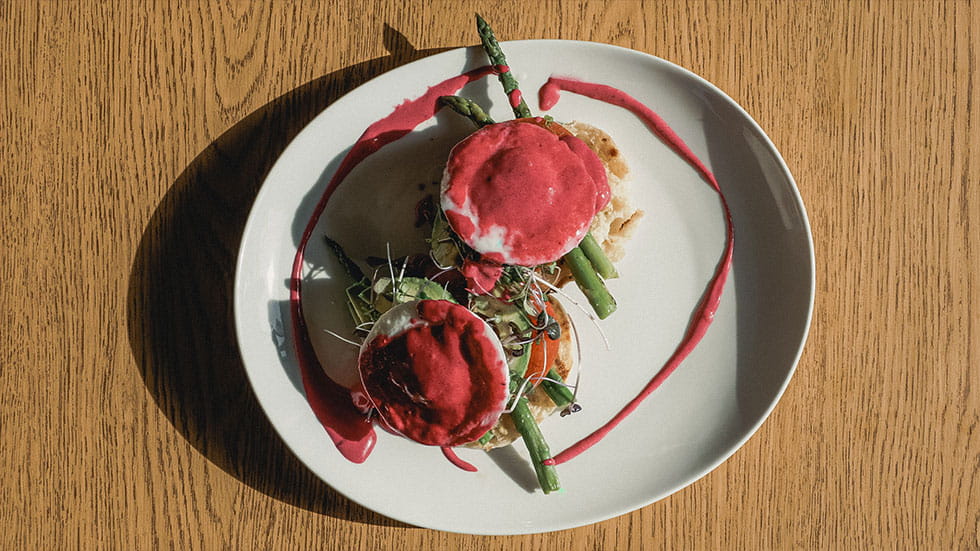 The Bruncheonette’s take a on a classic egg’s benedict. Photo by Boston Heath.

She was right. After an extended food coma, I awoke the next morning refreshed. I was excited to go where the wind carried me. I drifted to the Bruncheonette – a tiny joint with massive amounts of charm. After taking owner Chas Flanigan’s recommendation of trying the Benny Harper, an eggs benedict with bacon, avocado, and tomato, I listened to her life recommendation.

“I don’t think there’s anything really grandiose about it,” she advised. “Just be kind and move on. Don’t take things to heart all the time.” 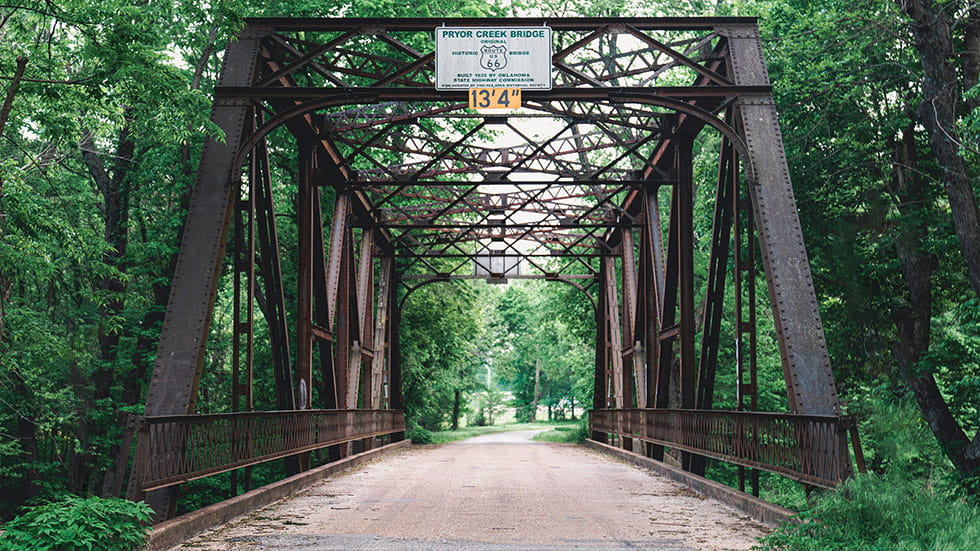 Following the back roads of Route 66 across the historic Pryor Creek Bridge. Photo by Boston Heath.

As she dropped this nugget of wisdom, it hit me. The best parts of this trip, of this life, really weren’t grandiose. I didn’t need big plans or an epic destination. All the meaning I craved could be found by listening to my cravings. I guess when you keep an open mind and stop following directions, there are no wrong turns out here. Maybe, just maybe, it will lead you to bacon. 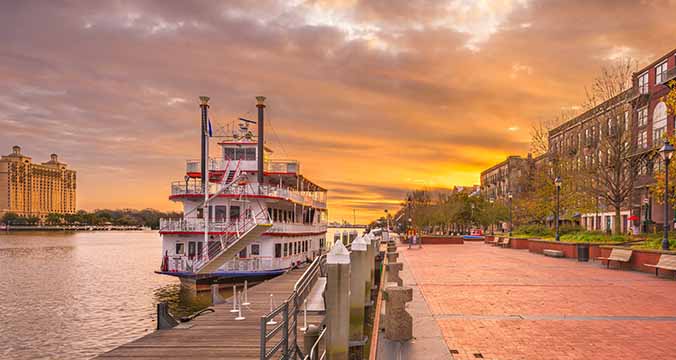 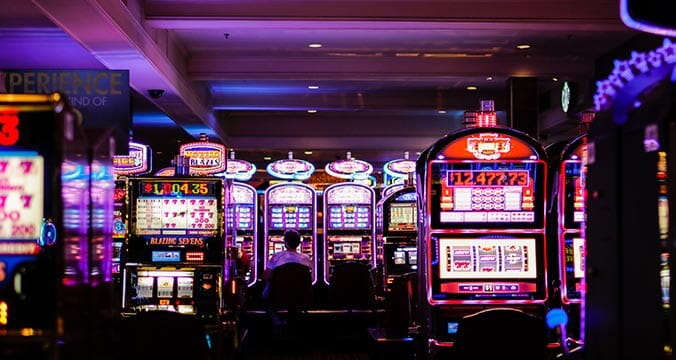 Why I Was Surprised by Las Vegas 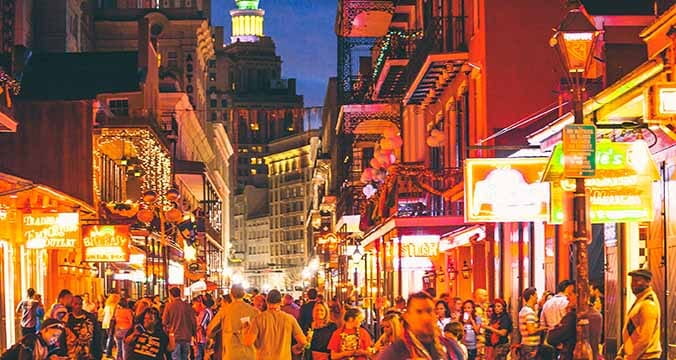