THESE NATURAL WONDERS ARE WORTH CHASING

Waterfalls are a magical sight to behold, as these cascades can been seen at different angles and approached via pathways or from nearby parking lots. Gaze upon these waterfalls across the United States. 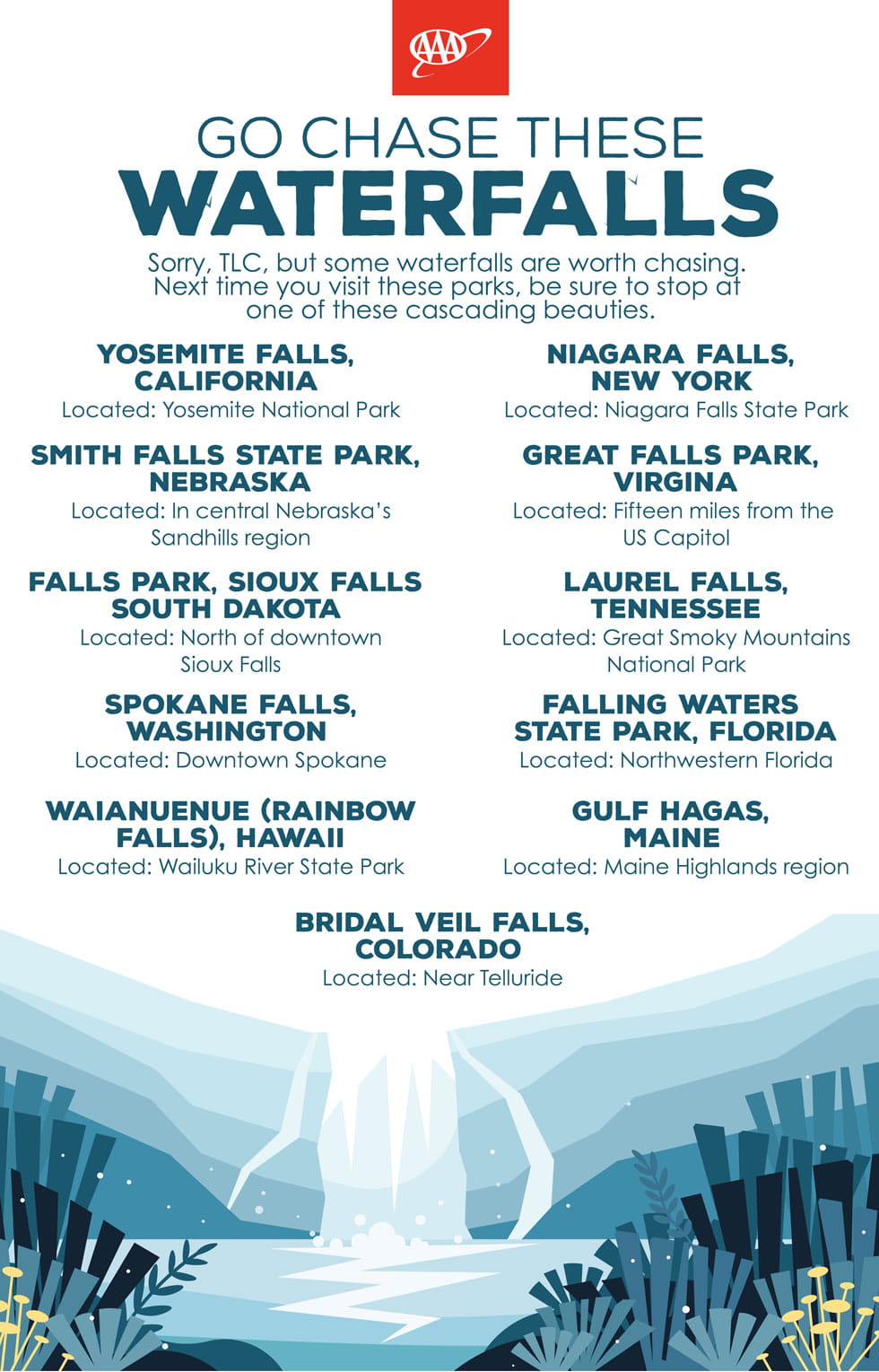 YOSEMITE FALLS, CALIFORNIA
Dropping at 2,424 feet, these falls in Yosemite National Park consist of three separate waterfalls. Along with the middle cascades, at 675 feet, Lower Yosemite Falls is where hikers can watch the final 320-foot drop. A strenuous trek to the Upper Yosemite Falls is rewarded with views of its top plus Yosemite Valley, Half Dome, and Sentinel Rock. 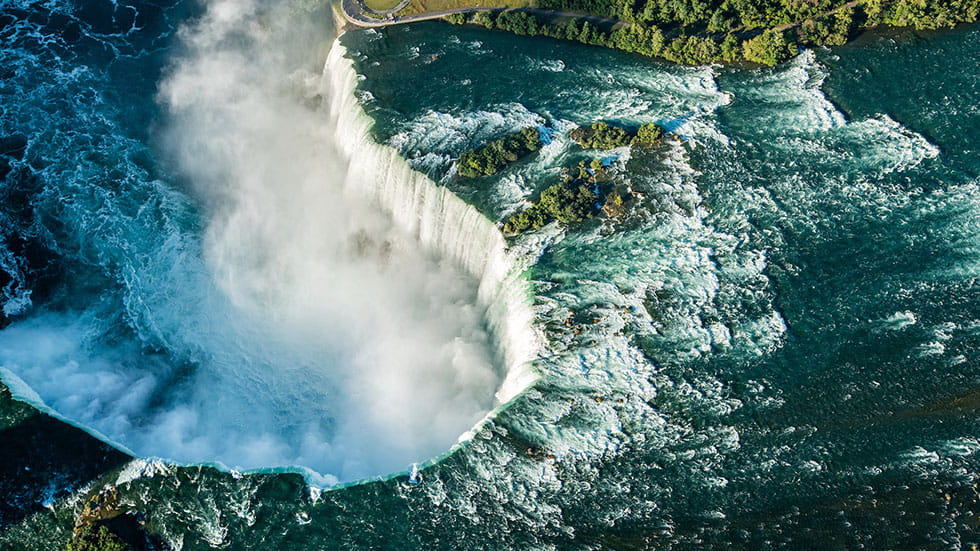 NIAGARA FALLS, NEW YORK STATE AND ONTARIO, CANADA
The world-famous attraction is comprised of the American Falls, the Bridal Veil Falls, and the Canadian Horseshoe Falls. On the U.S. side, Niagara Falls State Park’s Cave of the Winds gets closer to the falls via a descent into Niagara Gorge and then to view from the Hurricane Deck. And take a cruise on the Maid In The Mist, a popular boat ride. 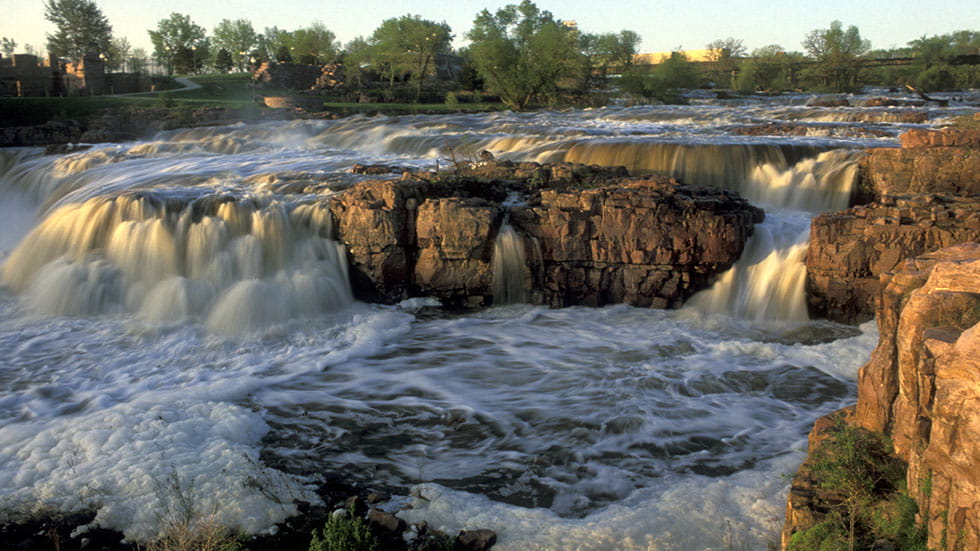 FALLS PARK, SIOUX FALLS, SOUTH DAKOTA
North of downtown Sioux Falls, this city park sees an average of 7,400 gallons of water dropping 100 feet over the course of its falls each second. See them from a five-story observation tower and other viewing platforms. 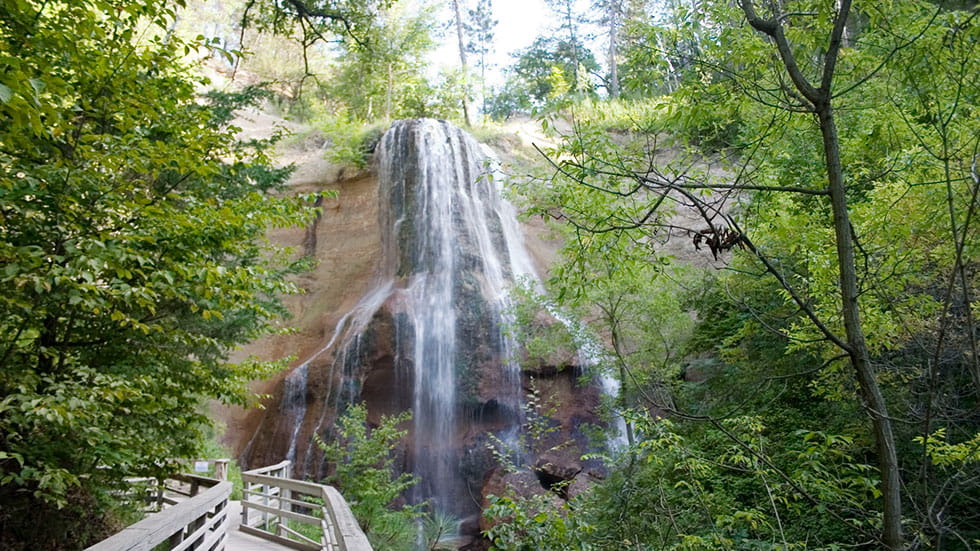 SMITH FALLS STATE PARK, NEBRASKA
In central Nebraska’s Sandhills region, this state park features a 70-foot roaring waterfall—and the state’s highest—that you can see from a foot bridge across the Niobrara River. This National Scenic River is also a popular destination for going tubing, canoeing, or kayaking. 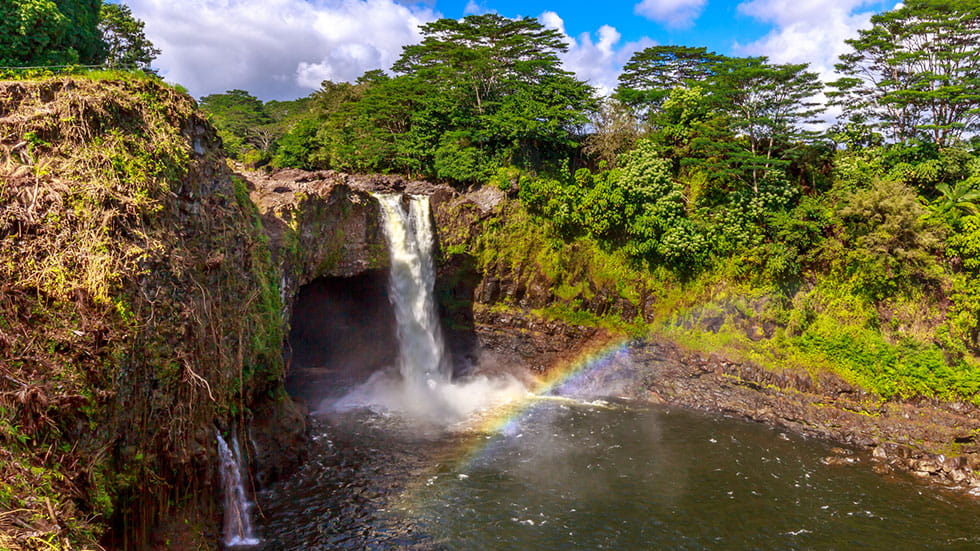 WAIANUENUE (RAINBOW FALLS), WAILUKU RIVER STATE PARK, HAWAII
Known as Waianuenue or "rainbow water," this park’s 80-foot waterfall is known for having rainbows forming on sunny days from its morning mist. About a mile and half upstream, the Peʻepeʻe Falls feed the Boiling Pots, which were formed by the slow cooling of basalt lava.

LAUREL FALLS, TENNESSEE
In the Great Smoky Mountains National Park, this 80-foot-high waterfall has upper and lower sections divided by a walkway crossing its stream at the base of the upper falls. A roundtrip hike to them is moderate and can take about two hours max. 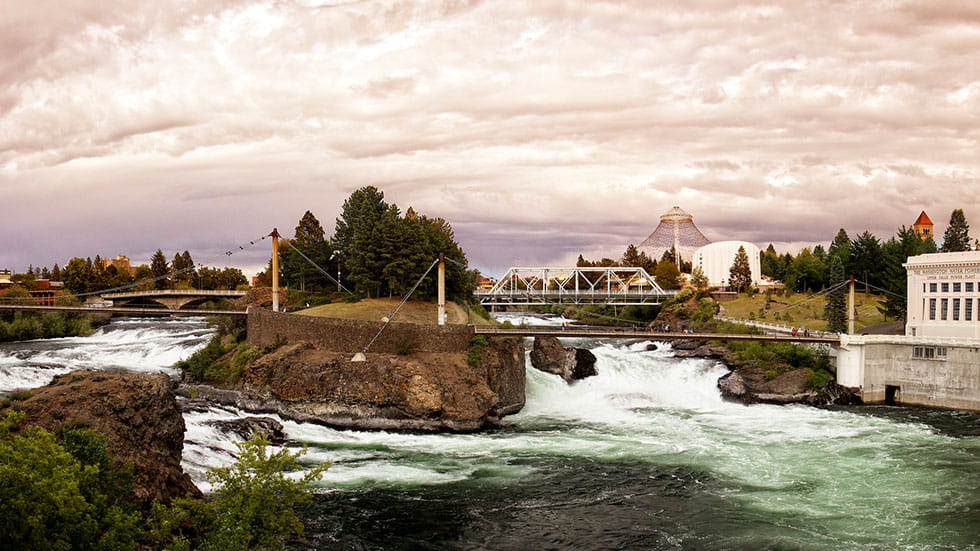 SPOKANE FALLS, WASHINGTON
In downtown Spokane, this urban centerpiece can be taken in via many ways. To reach it, go for a walk through Huntington Park or board the SkyRide gondola for a cable car experience. On the park’s north side, two suspension bridges get close to the upper falls; mind their shakiness but take in the midst that comes across.

FALLING WATERS STATE PARK, FLORIDA
This state park in northwestern Florida is the only place in The Sunshine State where you can see a waterfall. A tree and fern covered boardwalk leads to the 73-foot “Falling Waters,” which disappear into a large cavern within a 100-foot-deep sinkhole. 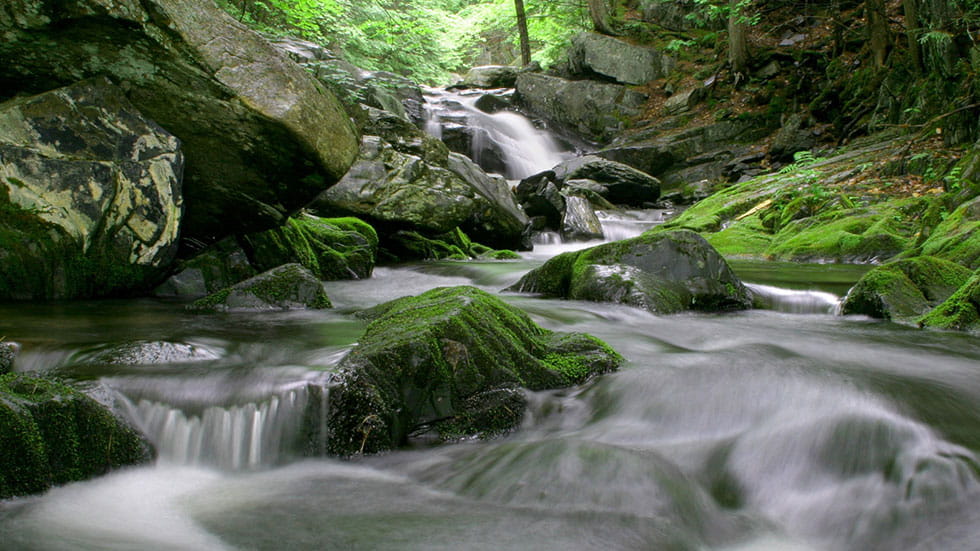 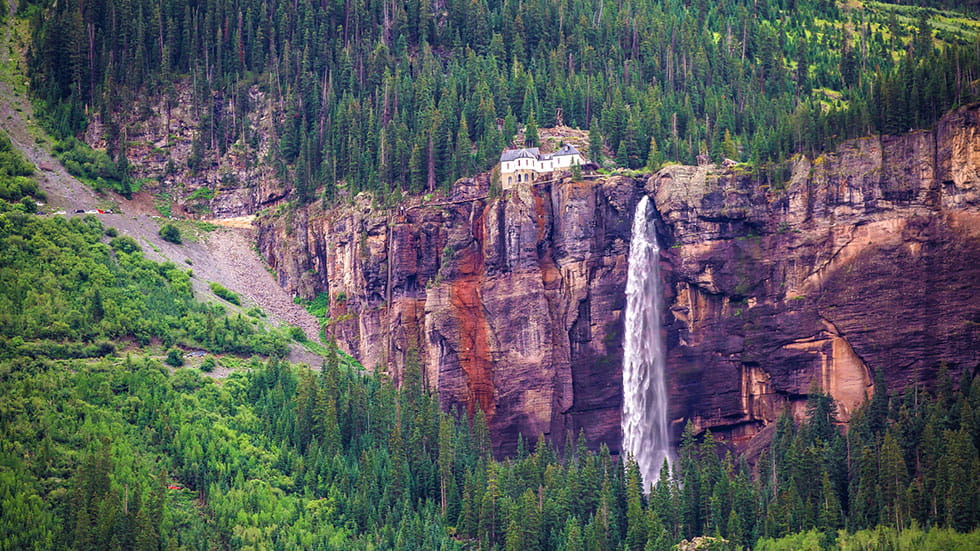 BRIDAL VEIL FALLS, COLORADO
Near Telluride, the spray from Colorado's 365-foot-high waterfall plummets to the depths of its accompanying canyon and beneath a historic power plant. Hike up the Bridal Veil Trail, which goes to the bottom of the falls, and then continue on the road to reach the top. 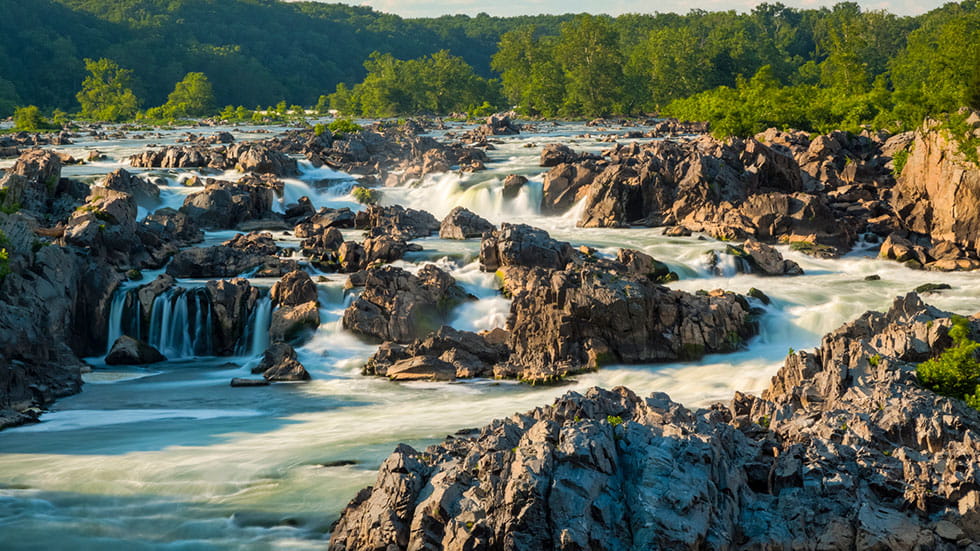 GREAT FALLS PARK, VIRGINIA
Fifteen miles from the U.S. Capitol, this park’s falls are powered by the Potomac River. The river builds up speed and force, falling over a series of steep, jagged rocks and flows through the narrow Mather Gorge.