Travel Inspiration
WHERE TO SEE WHALES, DOLPHINS, TURTLES, AND MORE

Time your next vacation with a close encounter of the oceanic kind and prepare to be wowed. Witnessing a whale emerge from the depths of the sea to spring into the air (otherwise known as breaching) or snorkeling with an acrobatic sea turtle can become an amazing souvenir. Moments like these make for powerful memories, as they are amplified by a feeling of awe and wonder -- reminding us that there is special magic in all of Mother Nature’s creatures, even the ones we can’t always see because they swim beneath the surface. Here are some recommendations on where and when to meet some of the ocean’s most popular inhabitants, both big and small, on your next U.S. vacation. 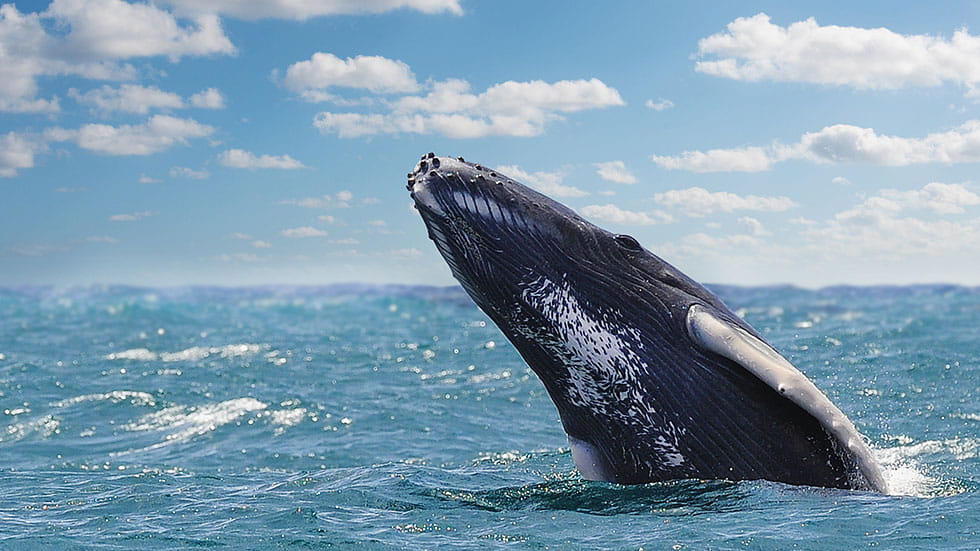 Where to go: Maui, Hawaii

When to go: December – April

Maui is home to an annual migration of North Pacific Humpback whales. Up to 10,000 humpbacks make their way to warm Hawaiian waters in winter. Come February, the waters around Maui are absolutely teeming with humpbacks, and this activity is very much visible from the shoreline (perhaps with a Mai Tai in hand). For a closer encounter, however, catch a whale watching tour from Lahaina Harbor that heads into the Maui Nui Basin for optimal viewing of these magnificent creatures. 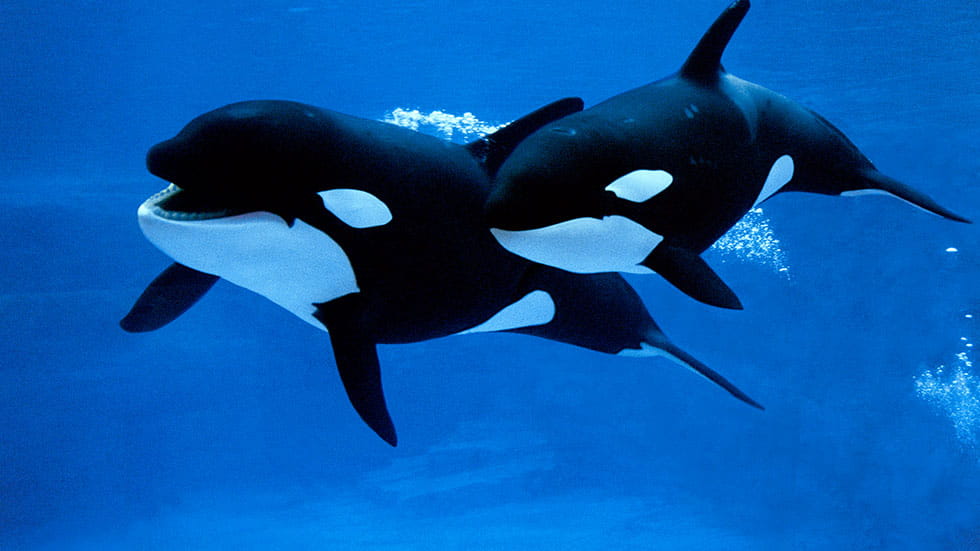 When to go: March – October

The calm waters of the San Juan Islands are an ideal playground for southern resident killer whales, also known as orcas or blackfish. In fact, there is one island within this chain off the coast of Washington State that is specifically named after the black-and-white beauty: Orcas Island. Whale watching tours depart daily from here so that you can witness them in the wild. Because these orcas are among the most researched marine mammals in the world, guides will often know the whales’ nicknames and family histories that date back to the early 1970s. 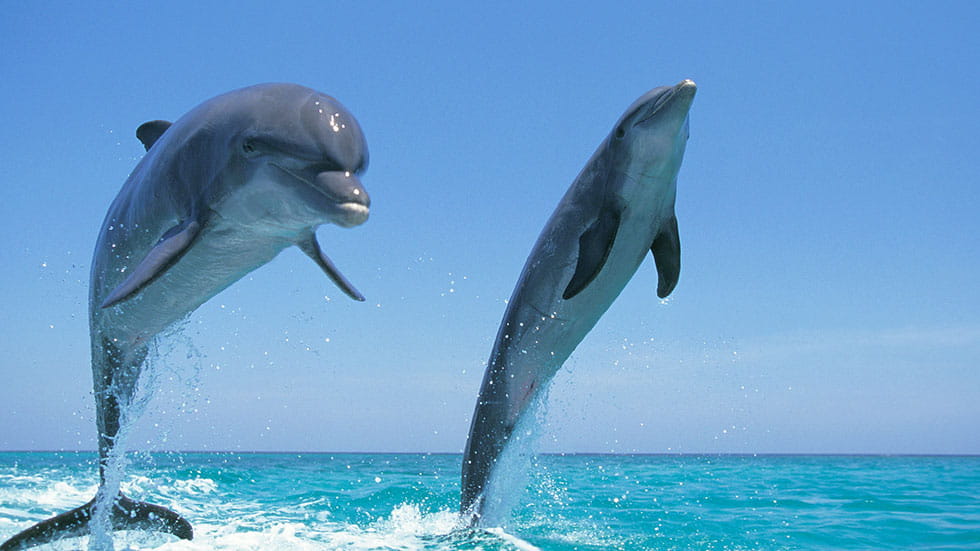 Skip the captive dolphin shows. The real dolphin “shows” happen in the wild, especially in Southwest Florida. Head to Florida’s Paradise Coast, which encompasses Marco Island and Naples, to experience these playful and intelligent creatures. The region’s robust ecosystem and abundance of mullet, a primary food source for local bottlenose dolphins, make them less elusive here than the migratory populations found elsewhere. Eco-tours offer boat excursions to witness them up close; dolphins love to ride in the waves created by the bow or surf in the boat wake. However, you could just as easily spot them from the beach or the Naples Pier, as dolphins come close to shore to fish. Just keep in mind that the best encounters happen when they approach you, so don’t chase or harass them. (This advice, of course, is relevant to any wild animal.) 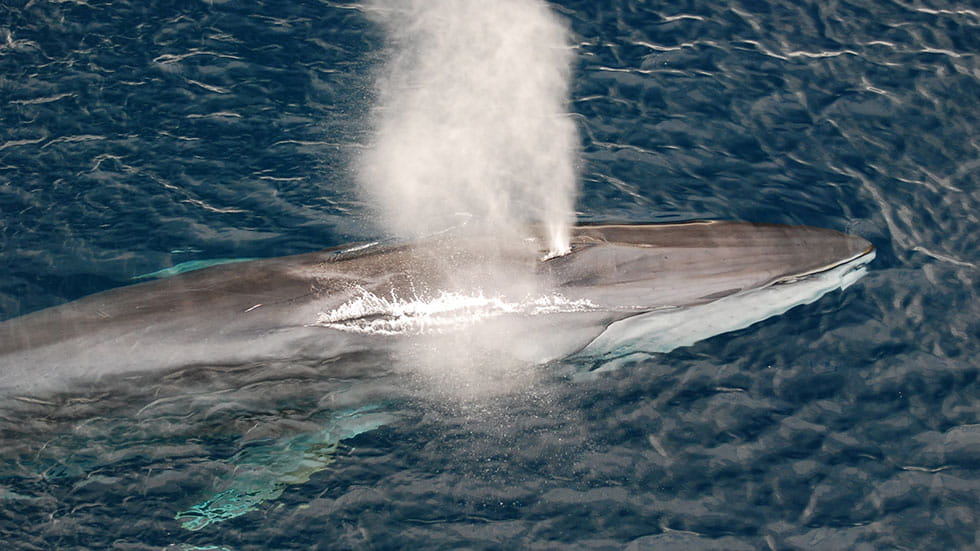 Where to go: Cape Cod, Massachusetts

When to go: May – October

Nicknamed the “Greyhound of the Seas” for their speed and agility underwater, fin whales (also called finbacks) can be spotted off the East Coast. Nearly 80 percent of all New England whale watching tours take place between Cape Ann and Cape Cod, as the rich habitat of the nearby Stellwagen Bank National Marine Sanctuary is an excellent feeding ground for whales like finbacks. Join a whale watching tour originating in the region’s towns of Provincetown or Hyannis—and get ready with that camera. 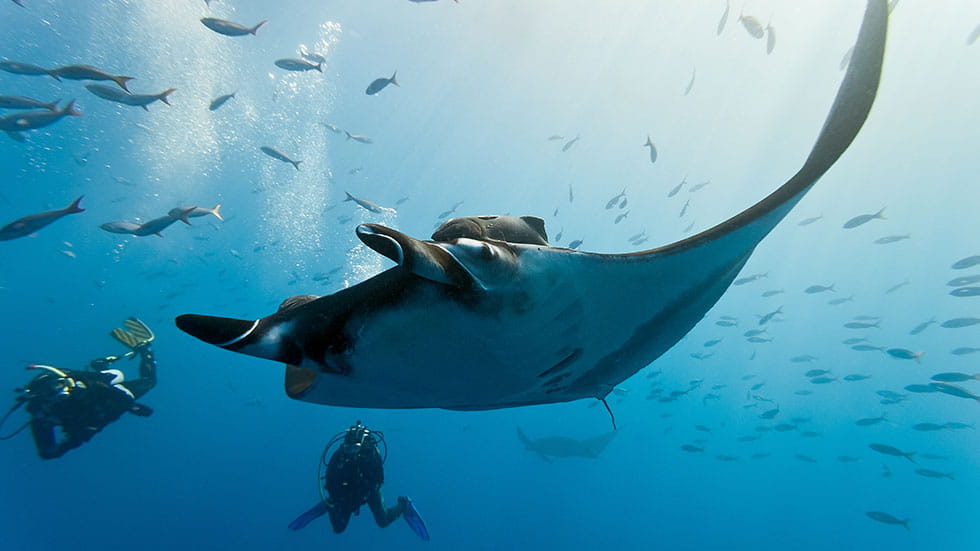 Where to go: The Big Island of Hawaii

When to go: May – November

They look like birds in flight, only they’re under water rather than in the sky. With wingspans as wide as 15 feet, giant manta rays are best experienced in the clear waters of Keauhou Bay on the island of Hawaii. Ocean conditions are optimal in spring and summer to snorkel, float, and swim with these gentle giants (they lack the stingers of their stingray cousins and don’t have sharp teeth). 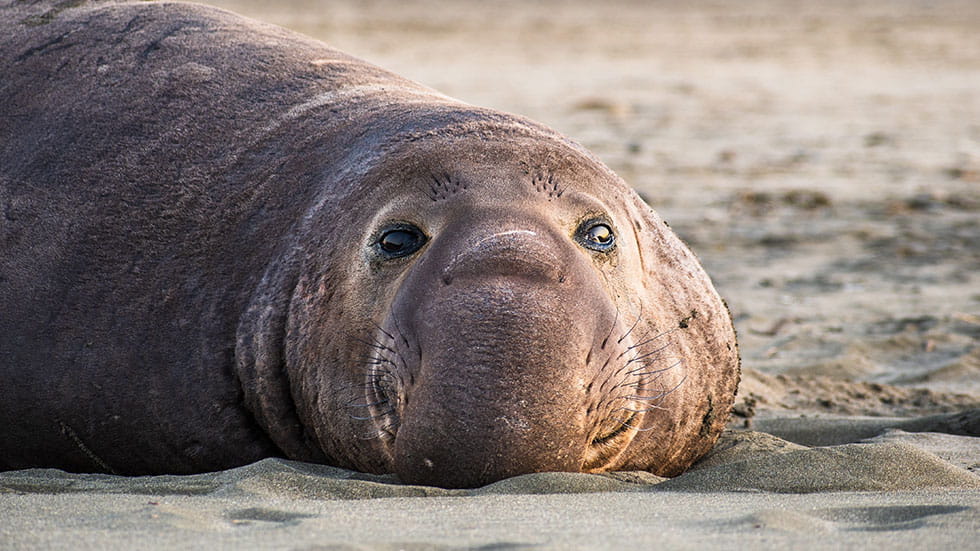 Where to go: San Simeon, California

You’ll likely hear them honking before you see them. Nearly 17,000 elephant seals call the Piedras Blancas Rookery in San Simeon, California, their home. The beach is near the historic Hearst Castle and is a popular stop on any Pacific Coast Highway road trip. Use the designated Elephant Seal Boardwalk to safely view these animals in their natural habitat. If you schedule a stop during the months of January or February, you’ll arrive in peak breeding and birthing season and should spot the newest members of the colony—tiny elephant seal pups. 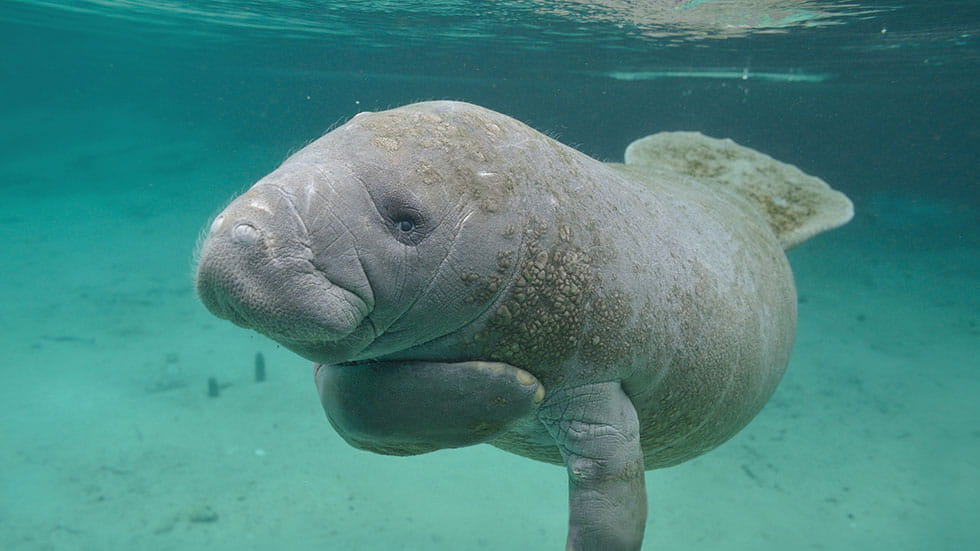 Where to go: Citrus County, Florida

When to go: November – March

There is one place in the country where it is legal to swim with wild manatees: Citrus County, Florida. If this experience is on your bucket list (or just made that list upon learning this news), head to Crystal River National Wildlife Refuge to meet this distant relative to the elephant. This refuge, 80 miles north of Tampa, was founded in 1983 to specifically protect the manatee population that thrives there. Plenty of outfitters in Citrus County offer snorkeling excursions that’ll help you swim with these gentle giants in a safe and legal manner. 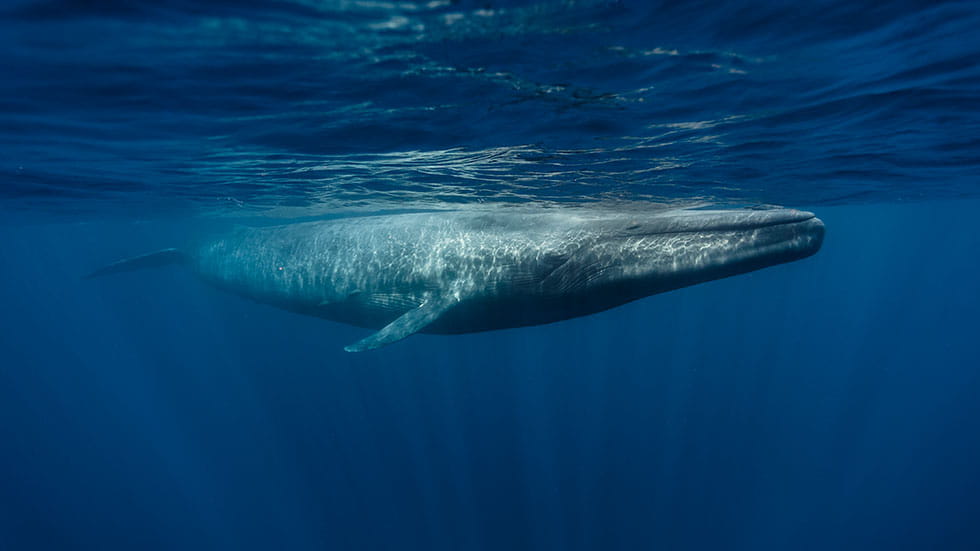 Where to go: Monterey, California

When to go: June – October

The world’s largest animal is the blue whale. It can grow up to 100 feet long and weigh up to 400,000 pounds—which is approximately 33 elephants. (It’s tongue alone can weigh as much as an elephant.) Spotting this endangered animal is always a thrill, even for the most experienced of marine biologists. These whales are known to cluster and feed around the Monterey Submarine Canyon, which is about a mile from the shore of Point Lobos in Carmel Bay. Join a whale watching tour from Monterey and keep your fingers crossed that one will surface! 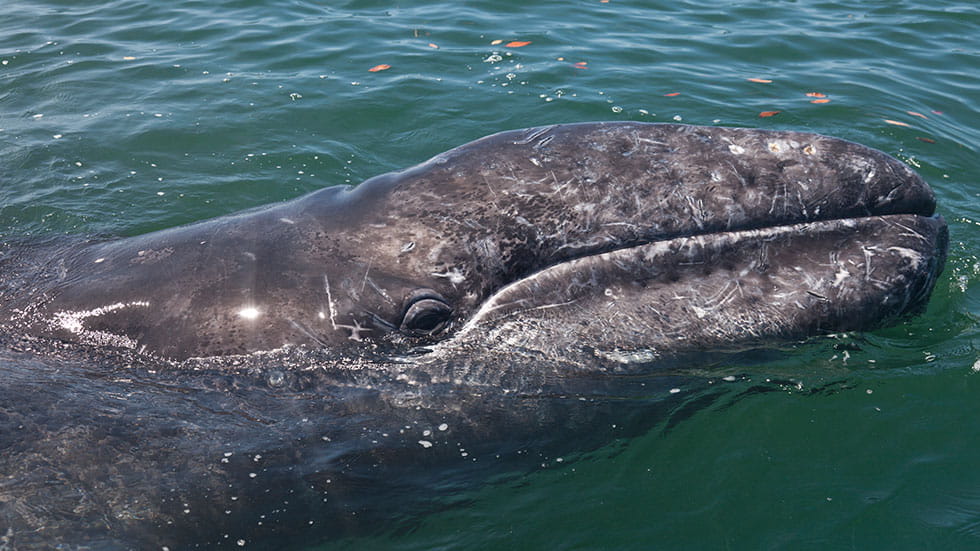 Where to go: Oregon Coast

When to go: June – October

Oregon’s Depoe Bay is an excellent launching pad for whale watching excursions. Among the perks—the food-rich waters of its coast are home to roughly 200 resident gray whales. These are whales that annually migrate north from Mexico but don’t continue on to Alaska because, well, there’s enough food off the coast of Oregon to keep them sticking around. Many of these resident whales even have names and funny stories, which you’re likely to learn while on your tour. If you’re not keen to step onto a boat, however, you might also spot whales from the state-run Whale Watching Center, also in Depoe Bay. 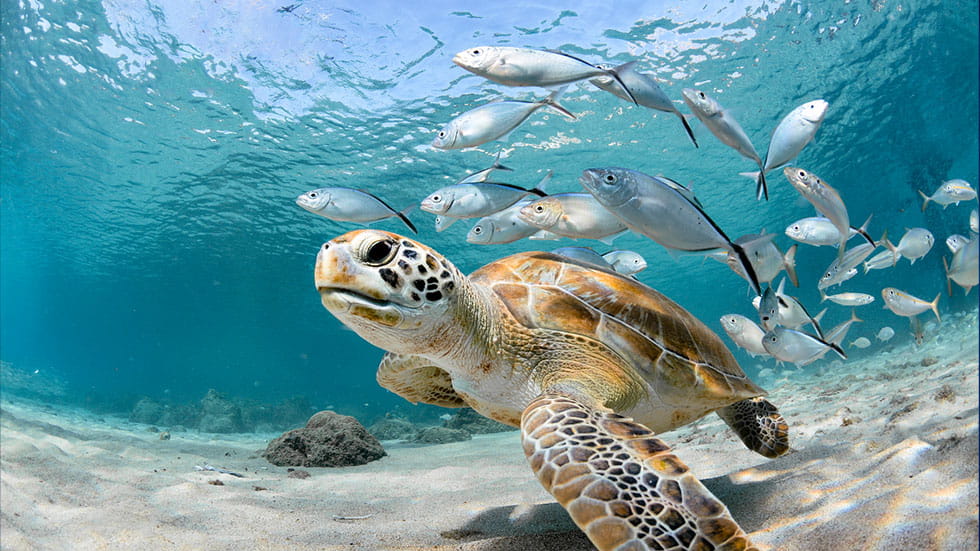 Where to go: Maui

Snorkeling will never be the same again after you visit Turtle Town. This is the nickname for the stretch of coastline on Maui that’s home to a high concentration of Hawaiian green sea turtles. In the waters of Maluaka Beach, these underwater ballerinas feed near the coral reef and shallows. Just remember—look, but don’t touch. These turtles are an endangered species.