AAA World | Central States
AN OASIS OF PARKS AND GARDENS AWAIT YOU ACROSS THE U.S.

The secret of Downing Children’s Garden at Botanica Wichita is that it was designed for adults. Ever since Marty Miller, executive director of the attraction in the Riverside neighborhood of Wichita, Kansas, told me that fact, I’ve felt justified in starting my visits to the 20-acre Botanica Wichita with a stroll through this imaginative, interactive garden even though I’m typically exploring without children.

Downing Children’s Garden has full-size features so that adults can discover alongside the children they bring—or on their own—instead of sitting on a bench and just watching the fun. Visitors enter the garden along a rainbow trail, passing through an archway of tinted, translucent glass that casts a rainbow on the ground when the sun hits it just right. An alternate route leads younger guests through smaller rainbows.

Both paths bring you to a sunflower-shaped fountain, and from there, you can head in numerous directions within the one-acre garden and try out different interactive elements. There’s a farm with raised beds and a working water pump, the Alexander Bee House showcasing an observation hive of honeybees and beekeeping equipment, a musical maze, a treehouse, and a 20-foot-tall monster tree with a face big enough to climb into. Look closely along the paths; scattered among the rhododendrons, hardy ferns, tree lilacs, and redbuds are surprises, including larger-than-life ant sculptures, tiny fairies, and mischievous mice building a rocket to reach a moon made of cheese. “Every guest who crosses under the rainbow becomes a kid again,” says Miller. “Our children’s garden has inspired other children’s gardens across the country.” 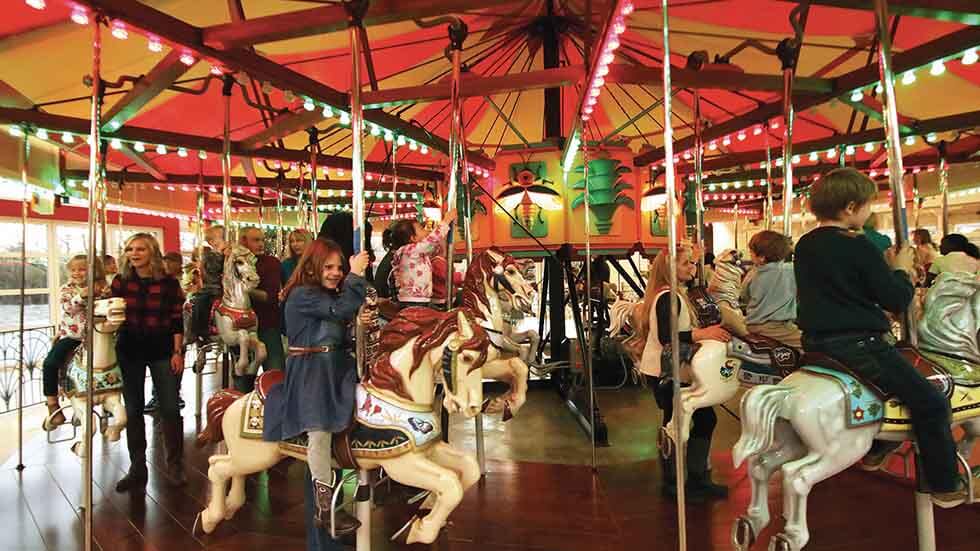 COMPACT BY DESIGN
While the children’s garden is a major draw to Botanica Wichita, it’s certainly not the only one. At its opening in 1987, Botanica was but four gardens on three-and-a-half acres of land. Today, Botanica Wichita features more than 30 themed gardens tucked along the city’s Arkansas River inside a fenced-off section of Sim Park. With some 275,000 visitors annually, Botanica is now the second-most visited outdoor ticketed attraction in Kansas.

“Our size and the closeness of each individual garden make us unique,” says Pat McKernan, Botanica Wichita’s first employee who now leads a staff of eight gardeners. “You don’t have to walk acres to see everything; there’s a new garden at every turn.” You can easily see everything in about two hours, from the Shakespeare Garden with its soothing limestone fountain to the Frances Lattner Wildflower Woodland with its cascading stream

The opening of the Downing Children’s Garden in 2011 spurred the addition of several gardens in the past decade, including the Gene E. Spear Railroad Garden that has large-scale model trains running through detailed seasonal scenes. The Chinese Garden of Friendship, which opened in 2015, introduces visitors to the plants, water features, rocks, structures and art found in traditional gardens of Kaifeng, China, one of Wichita’s Sister Cities. Botanica also plans to create gardens representative of those in Wichita’s other Sister Cities: Tlalnepantla and Cancún, Mexico, and Orleans, France. 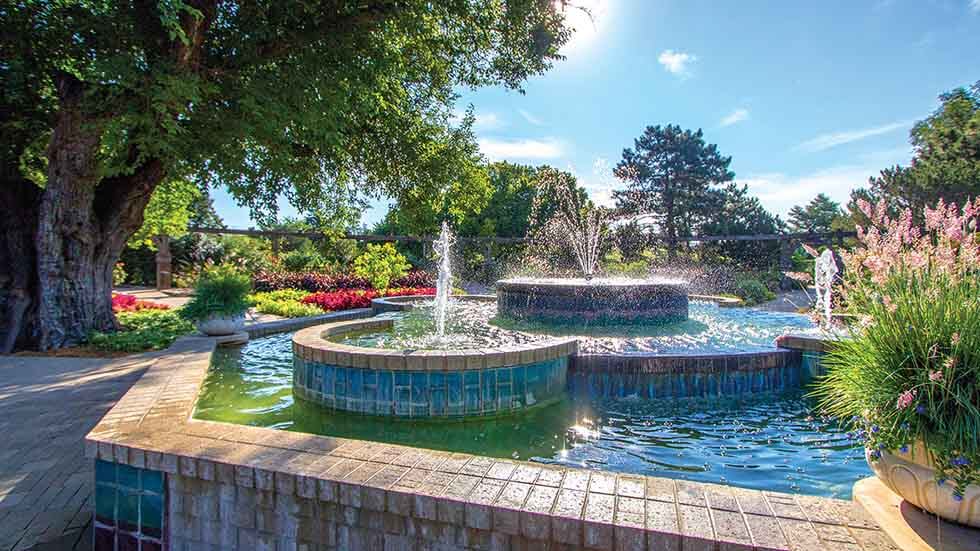 JOY RIDES
Coming this year to Botanica, the Koch Carousel Gardens will comprise a playground, water features, a bistro, and an outdoor stage large enough to hold the Wichita Symphony Orchestra, along with lawn seating for 3,000. The centerpiece of the nearly five-acre development, the Khicha Family Carousel, opened this past November. The colorful 1949 carousel was donated to Botanica Wichita by Joyland Amusement Park, which operated in Wichita from 1949 to 2006. Miller says the historic 36-horse, 2-chariot Allan Herschell carousel is believed to be the only one of this model still in existence.

It took an army of engineers, architects, and artists five years to give the carousel a fresh nature-themed look and install modernized mechanics and features. One local artist and restorer refurbished all 36 horses, stripping 80 years of paint and repainting them by hand with birds, flowers and iconic local images. The removal of the two chariots allows the ride to accommodate passengers in wheelchairs. Now housed in a 9,000-square-foot glass and steel pavilion, the 40-foot-tall ride spins with LED lights that can create 16 million color patterns.

A KALEIDOSCOPE OF BLOOMS AND ACTIVITIES
Botanica’s parade of color starts with the emergence of some 125,000 daffodil blossoms from February into April, depending on temperatures. Mid-April brings blooming trees, shrubs, and perennials alongside 63,000 tulip bulbs in 112 different varieties. The best place to see the spring explosion of color is at the Margie Button Memorial Fountain and Garden, which is considered the centerpiece of Botanica Wichita. This year, its eight beds surrounding a large flower-shaped fountain will feature 14,000 red and yellow tulips.

Come late spring, the tulips are replaced with 25,000 annuals that range in size from ground cover to 15-foot-tall plants. “We put a lot of emphasis on summer annuals and a lot of color,” McKernan says. “We want a wow factor around every corner as you go through Botanica.”

Summer at Botanica Wichita is high season for the aquatic plant collection; the Butterfly House, which is open June through September; and the Tuesday-night concert series on the native Kansas limestone terrace, held May through September.

Fall brings chrysanthemum and pansy plantings. Beyond the blooms, programming and special events keep visitors coming to Botanica Wichita year-round. Offerings range from drop-in craft activities for kids, to adult programs such as honey tastings at the Alexander Bee House, to seasonal events around Halloween and Christmas. From the day after Thanksgiving to early January, Botanica Wichita dazzles nearly 80,000 visitors with a holiday-themed light and music display featuring more than two million lights arranged in different themed displays throughout the gardens.

For those spending a few hours of family time at Botanica Wichita—with kids or kids at heart—the Downing Children’s Garden is a favorite spot. Others head to the solitude of the Frank Smith Woodland Glade and hope to see wildlife, or find a bench along the redwood boardwalk over Boeing Pond to admire water lilies and other aquatic plants. Botanica Wichita offers something for every age and interest.