FROM ISLA VERDE TO EL YUNQUE

A vacation in San Juan, Puerto Rico, is all about ease. Because Puerto Rico is an unincorporated territory of the US—located about 1,000 miles off the coast of Miami, Florida—visitors from the States don’t need a passport, and there won’t be any currency confusion. Plus, there are many nonstop flights to the capital city, and cell service is reliable and without roaming charges. Combine all those conveniences with pristine sandy beaches and swaying palm trees, and you have the dreamiest of getaways.

San Juan is one of those appealing cities where you can stick your toes in the sand within minutes of your plane touching down. The ocean laps right onto beaches inside the city, and a taxi ride from the airport to the heart of town takes less than 30 minutes. Although Puerto Rico was hit hard by Hurricane Maria in 2017, the island has bounced back, with San Juan leading the way.

Every visitor should explore the three primary neighborhoods in and around San Juan. Each has its own distinct charms, and no matter where you choose to stay on the island, you can access them easily by taxi or ride share. You also shouldn’t miss a day trip to the rainforest. 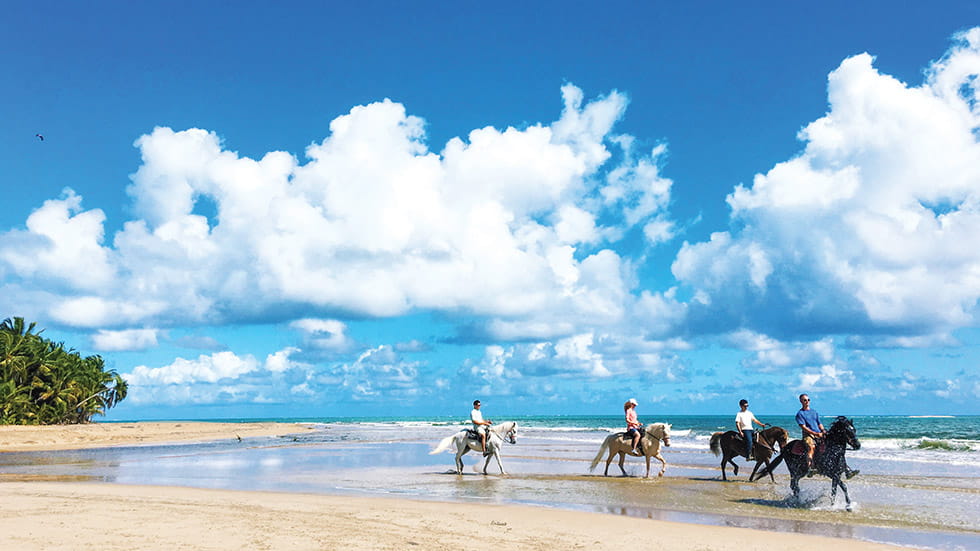 ISLA VERDE
Close to the airport and just east of San Juan, Isla Verde is a luxurious neighborhood in Carolina, Puerto Rico’s tourism hub, known for its miles of soft sand beaches fringed with coconut palms. Here, you’ll find some of the island’s largest resorts, with amenities such as spas, pools, casinos and water sports. You can lounge along the shoreline of the famously warm waters, grab traditional breakfast such as mallorca (a ham-and-egg sandwich on a fluffy, buttery roll dusted with powdered sugar), and have a snack of mofongo (a dish made with mashed fried green plantains) at authentic mom-and-pop eateries as a break while shopping in traditional markets. 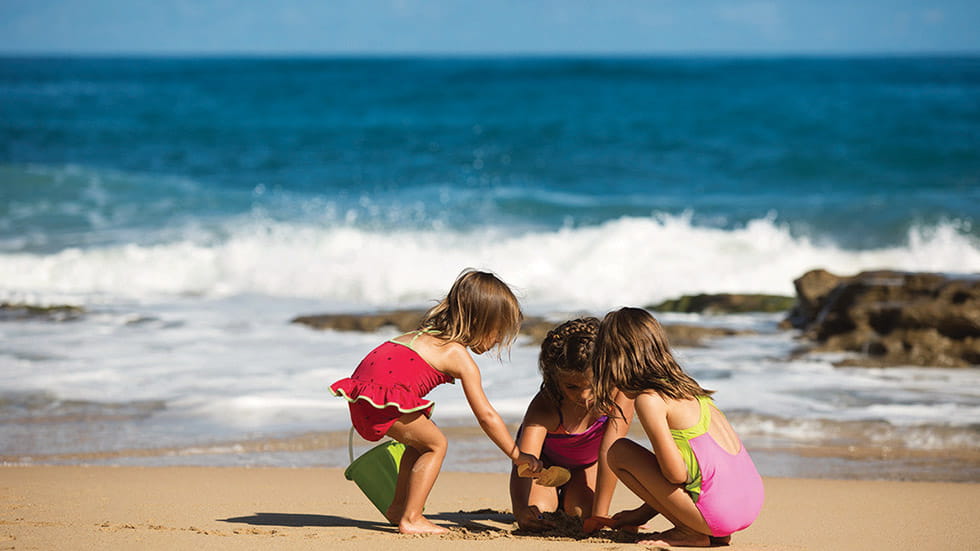 CONDADO
Defined by chic boutique hotels, luxe restaurants, high-end galleries, and the island’s most expensive shops—think Cartier—this tree-lined oceanfront quarter of San Juan draws shoppers with its pedestrian-friendly avenues. It’s home to notable lodgings such as the Condado Vanderbilt Hotel, opened in 1919, with its Spanish Revival architecture and acclaimed 1919 Restaurant, helmed by Michelin-starred executive chef Juan José Cuevas. A lively nightlife that includes hip rooftop bars where international DJs entertain has made Condado one of the hottest spots in the Caribbean.

While the ocean is rougher here than in Isla Verde, the rocky outcrops make for more dramatic vistas and sea-splashed majesty. For those seeking calmer waters, Condado Lagoon—popular for stand-up paddle boarding and kayaking—is within walking distance of many hotels. 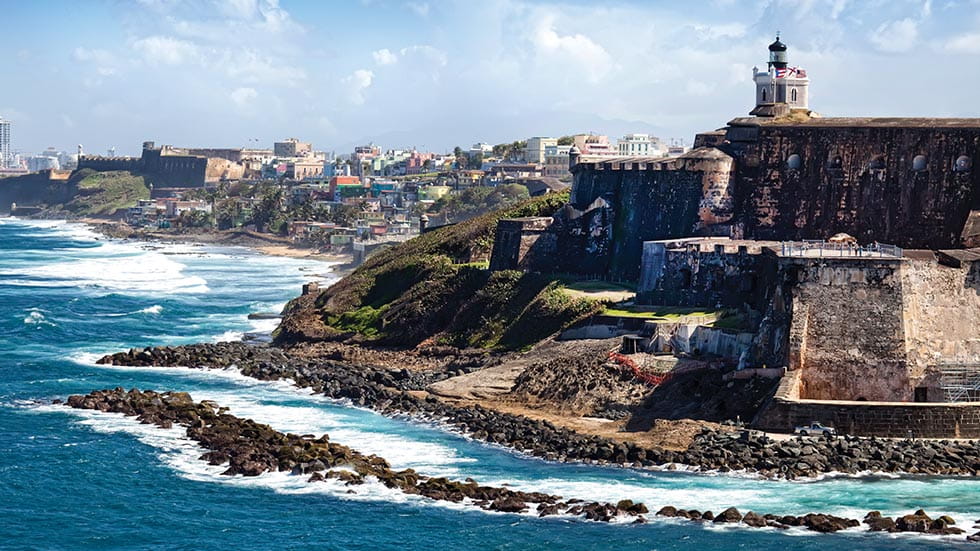 OLD SAN JAUN
It doesn’t get more appealing than the old town, the crown jewel of San Juan, where cobblestone streets anchor 16th-century buildings with filigreed balconies. Historic inns (including the former convent Hotel El Convento) are the accommodations of choice.

Just two-and-a-half-miles long and a half-mile wide, the old town is easily walkable. And while its past is lovingly preserved, this part of town is also one of the liveliest of San Juan’s neighborhoods, with trendy shops, charming courtyard cafes, bustling bars, and fascinating museums and galleries, many of which feature the work of local artists.

Buy an inexpensive kite in the plaza just outside La Fortaleza, the governor’s residence since 1533, or at any of the many shops and stalls along the 10-minute walk to El Morro, where you can join the local children flying kites along the hills surrounding the seaside Spanish colonial fortress.

When the time is right, AAA Travel agents are ready to help you plan your next vacation. Find an agent.

El Morro (formally named Castillo San Felipe del Morro) is the centerpiece of San Juan National Historic Site, which also includes a second stone fortress—Castillo San Cristobal—as well as a smaller wooden fort and the city walls. Together with La Fortaleza, the fortresses have earned UNESCO World Heritage recognition. El Morro is not only popular with tourists and locals: Mellow stray felines also roam the stone fort. The cats areso famous that they even have their own calendar.

Come sunset, head to popular Plaza de San Jose to dine al fresco on local fare at one of the restaurants surrounding the plaza. On weekend evenings, kick up your heels to live salsa and bomba courtesy of street musicians. 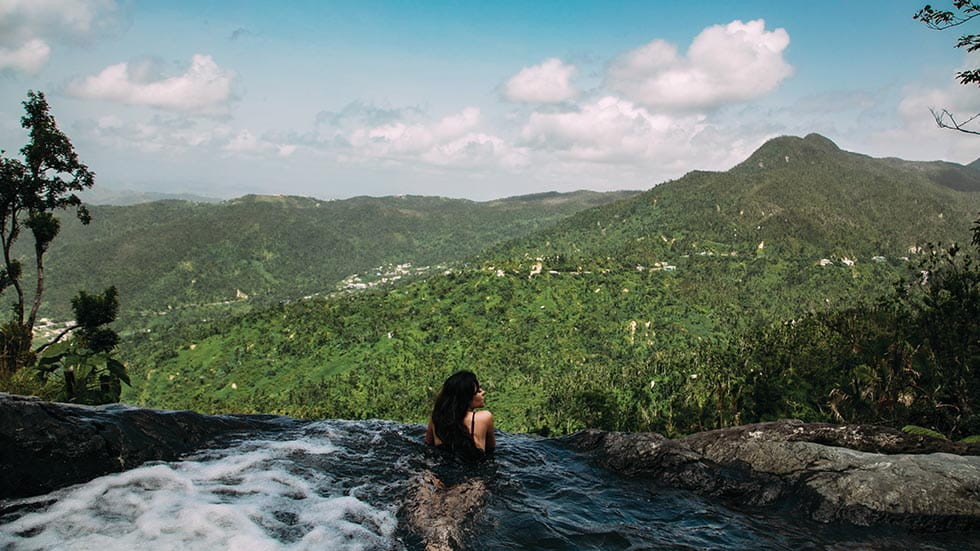 
EL YUNQUE: AN EASY DAY TRIP
Be sure to plan a day trip to El Yunque National Forest. From San Juan, you can be transported by car, taxi or bus in just about an hour to the only tropical rainforest in the US National Forest System. Here, you can hike trails in the Luquillo Mountains to discover waterfalls, colorful parrots and ancient petroglyphs. Or, you might prefer to take a dip in a secluded swimming hole or horseback ride while enjoying the sound of the native coquí frog.

Energetic visitors will want to climb to the top of the castle-like Yokahu Observation Tower, perched at an elevation of 1,575 feet, for sweeping views of the forest, the Atlantic and the Caribbean.

Cap off your excursion with dinner in the neighboring town of Luquillo, where a cluster of small, family-operated eateries serve some of the island’s best food, including homemade specialties such as deep-fried crab tacos and spicy beef hash empanadas.

San Juan, Puerto Rico, is a rare magical place where vibrant city life combines with a laid-back island experience, a place where you can at once find stimulation and relaxation and be immersed in a unique culture—all without leaving US territory. And in these complicated times, who could ask for more?