It’s often said that good photographs tell great stories, invite viewers on extraordinary vicarious journeys, and inspire connections to people and places that continue to burn brightly in our memory long after the print fades. Indeed, thousands of entries in the 2020 AAA World Photo Contest, themed “A Picture is Worth a Thousand Dollars,” delivered those rewards, from adventure and awe to inspiration and remembrance.

This year, AAA Members took us on a photographic tour across oceans and deserts in their hometowns and own backyards with more than 4,000 contest entries. From those, the AAA World associates selected five finalists in each of five categories: Nature, Nostalgia, Backyard Fun, Road Trips, and Friends & Family. Then we asked you, our Members, to vote for your favorite in each category in our online gallery at AAA.com/Photocontest. From that tally of more than 10,000 votes, five winning images emerged. Members then passed the judging back to us to award the grand prize and placement of the four runners-up.

We thank everyone who submitted their photographs and voted in this, our 21st annual contest. Here are the award-winning photographs and the great stories they have to tell. Enjoy the journey. 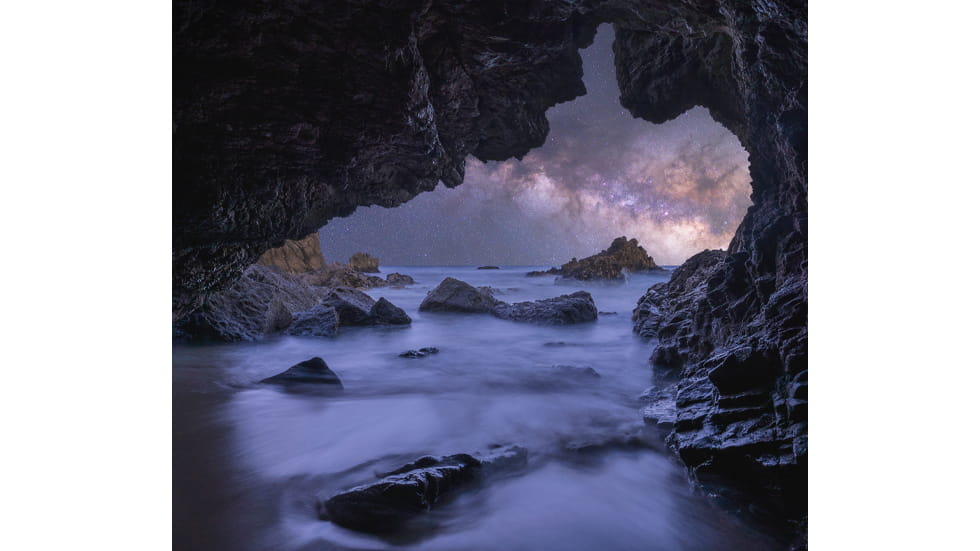 
Sometimes, exceptional photography is a matter of serendipity; other times, it’s the result of meticulous planning and skillful know-how. The latter was certainly the case for Chris Slagle and his intriguing composition of the interior of a sea cave along the coast of Malibu, California, taken this past July.

“The inspiration came from exploring these sea caves during the day and realizing that the cave openings pointed south, which is the direction the Milky Way galactic center appears when viewed from the Northern Hemisphere,” says Slagle. “I had scouted this location months prior to when I took the shot and I had this idea in mind, but it required multiple elements to align. I needed to find a window of time where low tide occurred in the evening at the same time that the Milky Way would line up in the direction I would be shooting from. I also needed a cloud-free evening to make sure I had good visibility of the night sky. After a few weeks of watching the tide charts and weather, I had my chance.”

To achieve this shot, Slagle had to navigate his way safely to the back of a single-opening cave (don’t try this at home, kids), position his camera equipment low to the ground and time things just right.

“The biggest challenges were safety and keeping my gear dry,” he says. “I started shooting during low tide, but the waves quickly started coming in and there is no exit from this cave, so I had to keep a very close eye on the increasing water level.”

After several attempts, Slagle captured the image he was aiming for. With the cave opening creating a unique frame, the water blanketed in an ethereal glow and the Milky Way imparting a dreamy backdrop. Titled “Celestial Sea Cave,” this grand-prize-winning photograph also took the highest honor in the contest’s Nature category and provided this seasoned videographer with his first photography award. 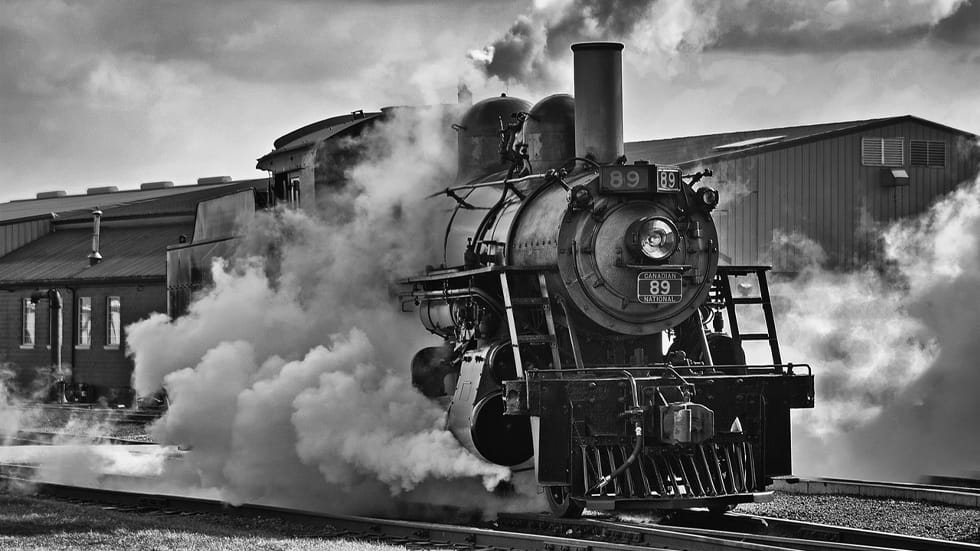 Bob Becker, a retired US Postal Service letter carrier, has long been serious about photography as well as being an avid collector of photos of old race cars. So, instead of purchasing photos of race cars, one day he decided that he’d photograph them. Soon, that artistic pursuit would grow to include photographing restored World War II airplanes and historic trains such as this timeless image of the 1910 steam Locomotive No. 89 engine at the Strasburg Rail Road in Ronks, Pennsylvania.

“It was great timing, first thing in the morning, and the railroad workers were moving the engine to hitch it to passenger cars,” says Becker. “I was standing on the edge of the track at the station, waiting for the engineer to start up the engine. It was a cold February morning, so there was a lot of steam and smoke. That’s what I like most about the photo: the smoke and steam and the angle.”

While Becker shot the image in color, he immediately knew he’d convert it to a black-and-white composition to lend an old-fashioned feel, ultimately making it the ideal candidate to garner the number-one spot in the Nostalgia category.

While this award is Becker’s first in the AAA World Photo Contest, it’s the third time since 2015 that his photographs have been named finalists in the contest. “The third time’s the charm,” he says. 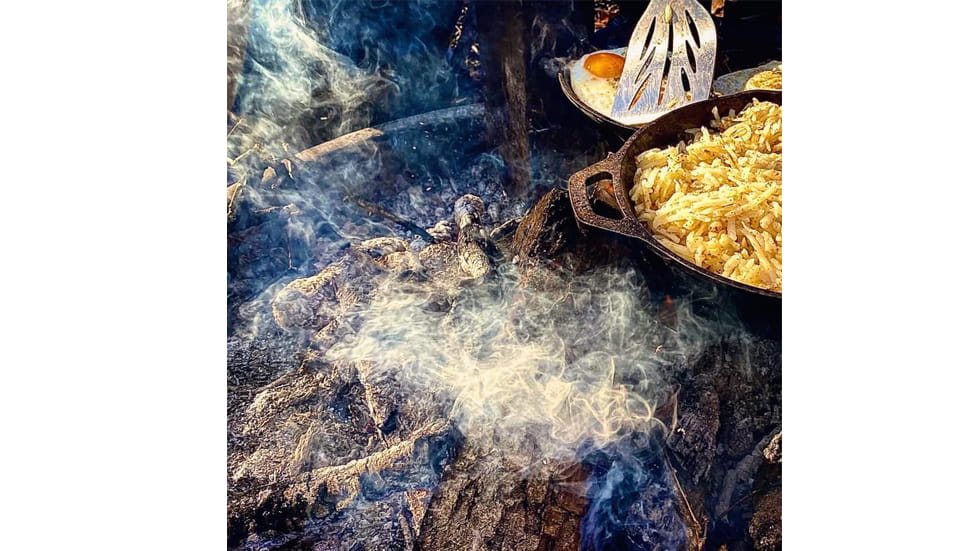 A series of moves around the country five years ago for her husband’s military career led to Ivy Bostock’s love of travel—and travel photography. So, when Bostock, her husband, and a few friends arranged a trip to Big Meadows Campground in Virginia’s Shenandoah National Park last November, she packed all her camping essentials, including her camera, of course.

While the park landscape is the focal point for most photographers, it was Bostock’s breakfast that beckoned a prime photogenic opportunity on the final morning of her trip.

“Hash browns, sunny-side-up eggs, and coffee were the perfect things to warm us up on that chilly morning and send us on our way home,” says Bostock. “The early morning light through the trees really made this shot. I had to wait between wind gusts, when the smoke was swirling around the coals just right, and had to crouch down pretty close to the fire to capture it.” 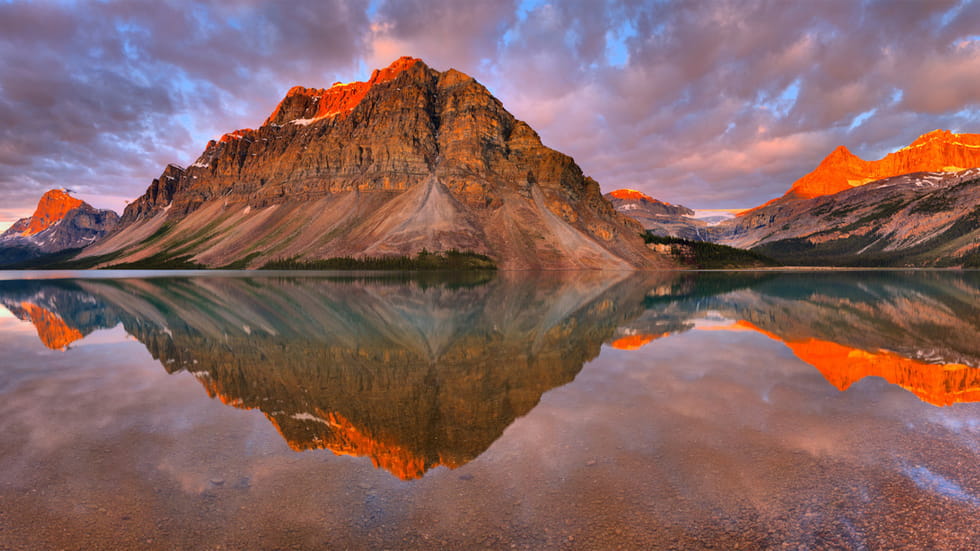 After years of working long hours in the corporate world, Adam Jewell quit his job on his 36th birthday and ventured from Pennsylvania to Utah to ski for two months. While there, a friend suggested visiting the state’s national parks. That suggestion led to a decade-long series of road trips to photograph every national park in the Lower 48.

During the summer of 2019, Jewell headed to Banff National Park in Alberta, Canada. “At sunrise in Banff, places like Moraine Lake and Lake Louise draw crowds like Walmart on Black Friday. I wanted to go somewhere more peaceful and relaxed. So, I decided to see what Bow Lake would be like,” says Jewell, jokingly adding that waking up in his car is so uncomfortable that he’s more often awake for sunrise photos than he’d be otherwise.

Indeed, sunrise presented Jewell with a Goldilocks occasion to capture this majestic image, which landed him the prize in the Road Trips category.

“The challenging part of getting this shot is taking all the individual frames in the two rows of the panoramic view in such a way that there is enough ‘texture’ where they overlap for software to know how to stitch them all together for a complete image,” he explains. “It captures the full panoramic scene, the texture of the clouds in the sky and the translucent reflections in the water that let the pebbles in the lake bed show through.”

This win adds to Jewell’s impressive resume of photography awards and publications, including honors from the National Park Foundation and National Wildlife Federation. 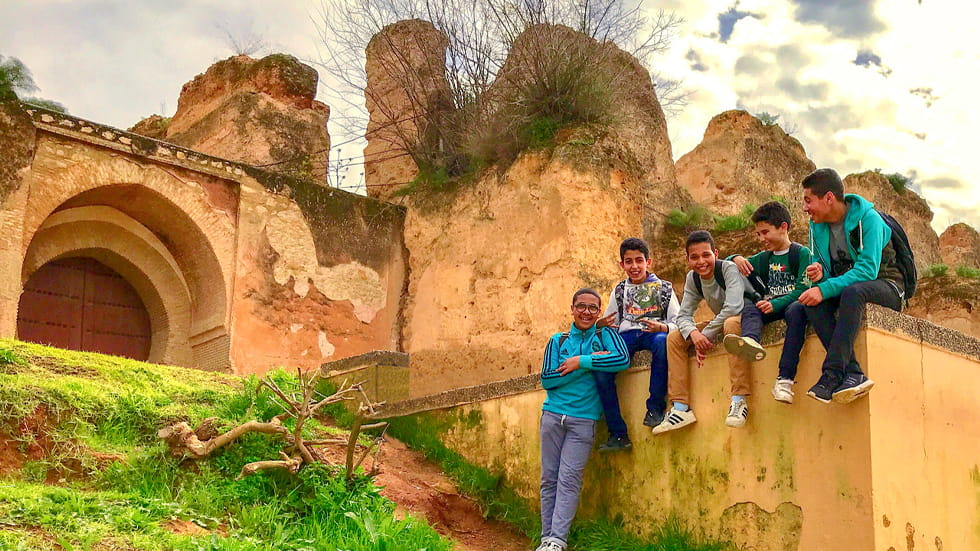 On a trip to Morocco in March 2018, Ira Robbins and his wife had been driving from Fes to Marrakech when they stopped in Meknes to visit the medina, the walled ancient section of the city and a UNESCO World Heritage Site. Here, they planned to stroll the cobblestone streets and tour some historic areas when a simple greeting led to this jovial photo.

“We had gotten out of the car and were walking toward the entrance gate of the medina when we saw these boys apparently on a break from school,” says Robbins. “I remember thinking that would be a great picture when the boy who is standing called out, ‘Hello!’ I responded, ‘Hello,’ and all five of them laughed. They wanted to test their English, so we chatted for a few minutes. I asked if I could take their picture and, as you can see, they were more than happy to accommodate.”

“It looked like it was going to rain, and I doubted that I would get a good shot. I was really concerned about the lighting,” Robbins explains. “But my limited photography experience told me to take the picture anyway and worry about the details later. The worst photo is the one you don’t take.”

This award is Robbins’ eighth in the past six consecutive years of the AAA World Photo Contest, besting his own record for the contest’s most wins.

Be Open For it All in Maryland

Bounty of the Bay: The Maryland Crab & Oyster Trail