WE TELL YOU WHY THEY’RE OUR FAVORITES

Here’s the scoop on a tasty selection of craft ice-cream makers around the Midwest. 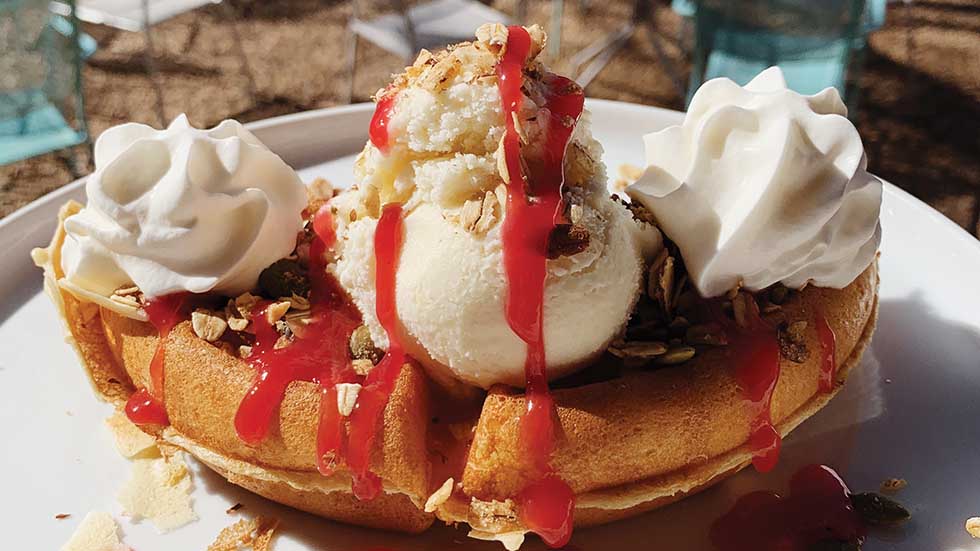 The sign in front of the cozy stone cottage screams, “WE EAT ICE CREAM FOR BREAKFAST.”  That should catch your attention enough to prompt you to stop by the Little Lion Cafe in Wichita, Kansas, at 9AM, but there will be many other reasons you’ll be happy if you do. Besides scooping small-batch ice cream into cups, into freshly baked cones, or atop fluffy waffles, Little Lion serves breakfast burritos, craft coffee drinks, and pastries made from scratch.

The shop is named for the firstborn daughter of husband-and-wife owners Ian and Jubilee Miller, acknowledging her courageous personality. It also personifies the duo’s daring in choosing high-quality ingredients, developing surprising combinations (such as Lime Coconut Avocado), and letting what’s abundant at local farms guide experimentation in their test kitchen.

Little Lion’s fanbase has followed the Millers from mobile carts in 2016 to a kiosk inside another business to the brick-and-mortar shop they opened in 2018. The idea for the business started churning when the Millers moved to Wichita, near the small town where Ian grew up, and they couldn’t find the artisanal ice cream they enjoyed while living in Columbus, Ohio.

So, they satisfied their craving at home using an ice cream machine purchased as a birthday gift. They loved sourcing ingredients from trusted local farms and creating flavors that matched what was available each season so much that they eventually wanted to share their creations with others.

The Millers purchase as many ingredients as they can in-state, including milk from Hildebrand Farms, blackberries picked from brambles at a nearby u-pick farm, and strawberries and apples sourced from organic, sustainable local farms. Other ingredients include organic cane sugar and bean-to-bar chocolate bars. The Millers are serious about being a scratch kitchen, making their ice cream bases, and even baking the cookies that get crumbled into flavors.

They produce six quarts at a time in their small-batch freezer and typically have 11 flavors in the store’s case. Half the assortment is always on the menu—Sweet Cream and Sultry Caramel, for example—leaving room for seasonal flavors and one-off experiments. Among those options are vegan sorbets and ice creams, including Edith Grey, which infuses a cashew and coconut milk base with black tea blended with rose and bergamot.

“While we don’t have 30 flavors in the case, our regulars know that when they come in, they will find a curated ice cream experience that we are excited about serving,” Ian says. “What we find interesting is when you can either take something familiar and present it in a new way that redefines what you thought you knew about that particular food, or when you can combine flavors that you would have never thought to combine and get something that’s really delicious and surprising.” Like a waffle sundae topped with a melting scoop of Citrus Olive Oil ice cream for breakfast. 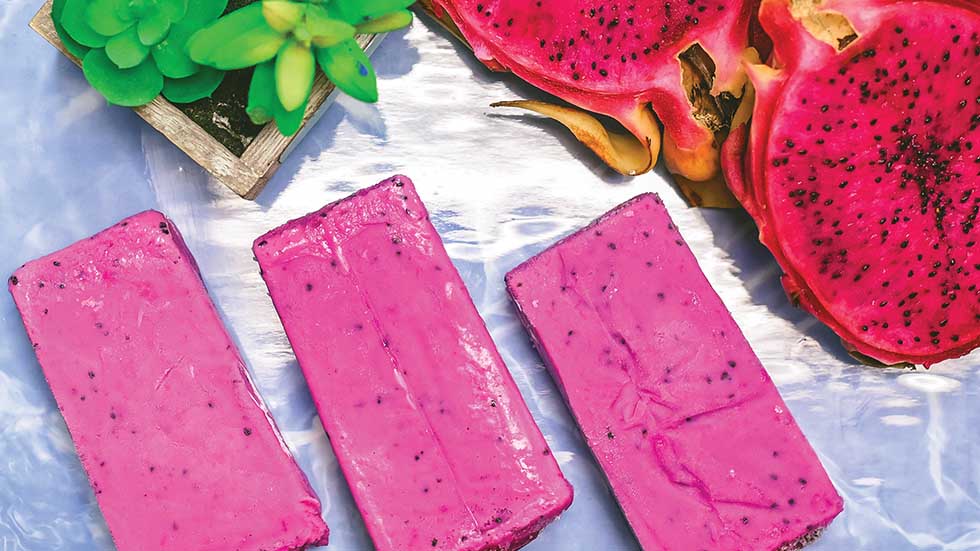 Paleterías Tropicana’s frozen treats are made with popular Latin fruits such as dragon fruit. Courtesy of Paleterias Tropicana

José Luis Valdez sold paletas (ice pops) in Guerrero, Mexico, as a young boy. In 2004, he and his wife Lucia Fonseca started Paleterías Tropicana to bring a taste of home to their predominantly Hispanic neighborhood in Kansas City, Missouri. Since then, the concept has expanded to bring the Mexican-style ice cream made with traditional recipes and a slow-churn technique to other cities in Kansas
and Missouri.

They started with three flavors—strawberry, mango, and chocolate—and now offer a lineup of 50 fruit- and cream-based popsicles from mango with chile to creamy pistachio. The shops also have rotating hand-dipped ice creams and sorbets, many using popular Latin fruits and ingredients such as dragon fruit, guava, and tamarind.

The Lemon Custard Pie ice cream at Sylas & Maddy’s Homemade Ice Cream has an entire pie churned into each bucket. The watermelon sherbet is made with a full chopped melon in each batch. The owners have developed more than 150 intense hand-dipped flavors since opening in 1997, with about 40 in the case on any given day. Don’t skip the waffle cones, also made in-house daily.

Betty Rae’s Ice Cream proves that novelty flavors can be delicious enough to join the regular rotation at its two shops in Kansas City, Missouri. To honor the city’s barbecue prowess, the owners collaborated with one of the most popular purveyors to create a highly unusual flavor—Joe’s KC Burnt Ends & Sauce. Joe’s molasses-based sauce is incorporated into caramel and then swirled into a sweet cream base, with tiny bits of brown-sugar-caramelized burnt ends from beef brisket mixed in to create the sweet and salty ice cream. You’ll always find at least 25 flavors on hand at Betty Rae’s, including go-to options, Lavender Honey and Lemon Poppyseed Cake, as well as flavors resulting from collaborations with regional businesses, including chocolate makers, distilleries, and breweries. The ice cream can also be served in boozy floats and shakes, blending any flavor of ice cream with beer or liquor. 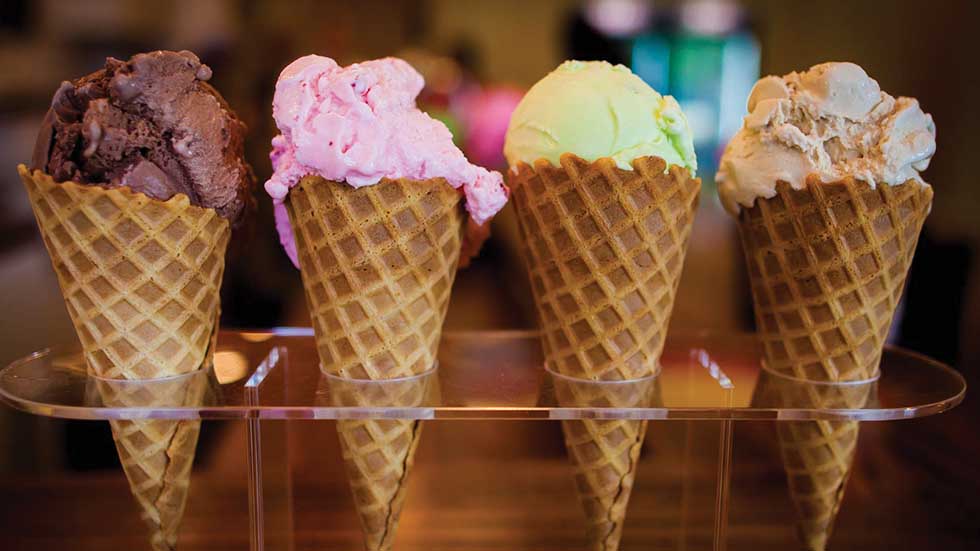 Roxy’s Ice Cream Social started in a truck in Oklahoma City and now has four brick-and-mortar stores. Fans love the rich taste and creaminess of bestseller Salted Caramel and the other 13 year-round hand-dipped flavors, including Raspberry Ricotta and Honeydew Melon.

Rose Rock Microcreamery owners say they are the only creamery in Oklahoma making batches as small as two-and-a-half gallons at a time while using all-natural ingredients for dense, thick, creamy flavors. They also have non-dairy sorbets and ice creams among the 16 hand-dipped flavors in the case each day. The namesake Rose Rock is chock-full of strawberries, chocolate, and candied pecans.

Staff at Leones’ Creamery scooped handcrafted ice cream into nearly 24,000 scratch-made, gluten-free waffle cones last year. Founded in 2014 by the Leone sisters and their family, the popular downtown spot serves up an ever-changing rotation of eight flavors, such as Milk Chocolate, Coconut tart Cherry, and Irish Stout with Oatmeal Cookies. The ice cream is hyperlocal, as Leones’ collaborates with area breweries, farms, and honey producers. 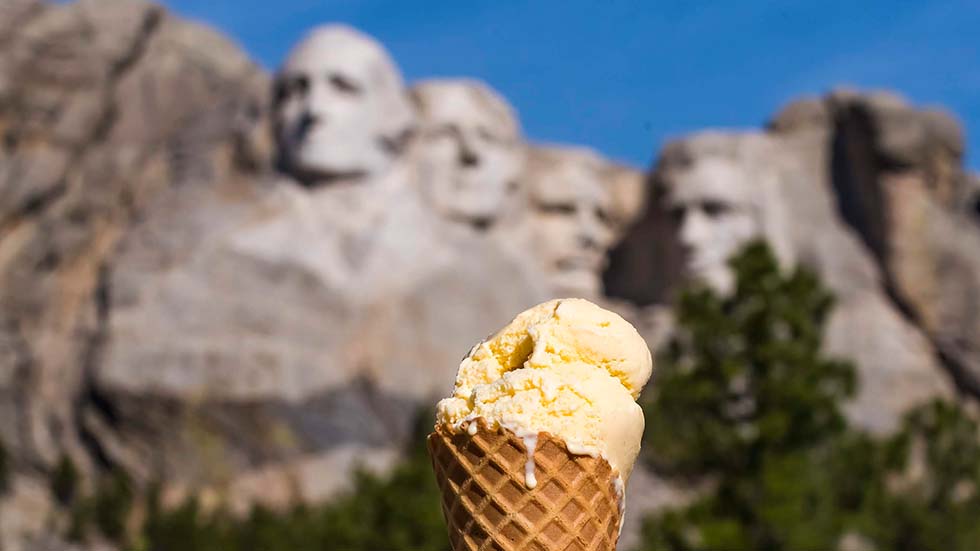 The ice cream station at Mount Rushmore National Memorial is likely the one place you’ll see an upcharge for choosing vanilla. It’s worth the extra dollar because this isn’t just any hand-dipped vanilla ice cream; it’s made at family-owned Pride Dairy in Bottineau, North Dakota, using what is the first known written recipe for ice cream in America. The recipe is stored in the Library of Congress and is in the handwriting of Thomas Jefferson, whose face is among the U.S. presidents carved at Mount Rushmore. Historians don’t believe Jefferson invented the recipe nor was he the first to bring ice cream to America. Nevertheless, he helped popularize the frozen dessert by serving it often to guests during his presidency.

TJ’s Vanilla is the bestseller among the six hand-dipped and three soft-serve flavors sold at Mount Rushmore. It is richer than most, and the vanilla beans used are from where Jefferson would have had to source them in 1780—Madagascar. 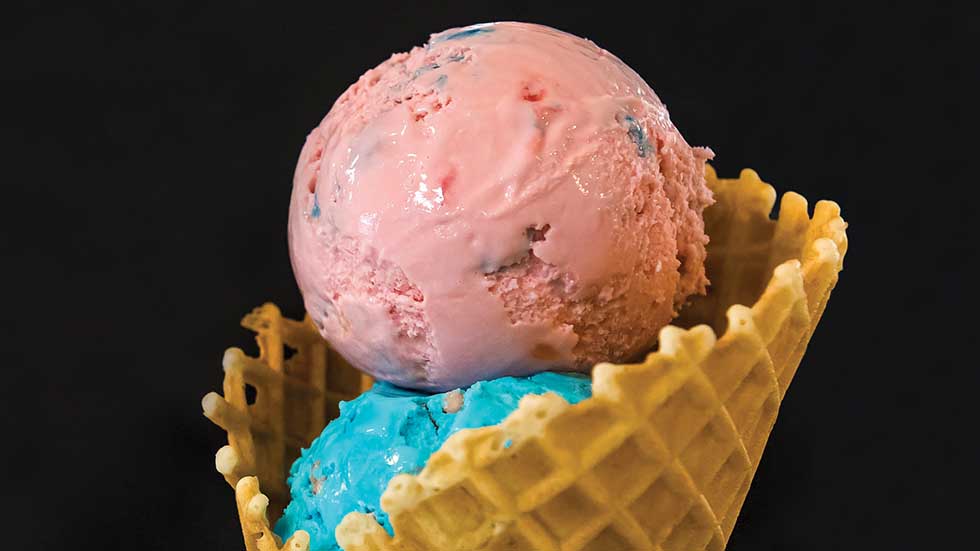 Visit the 105-year-old Stensland Family Farms in Larchwood, Iowa, just over the South Dakota border, for farm-fresh ice cream, or to take a scheduled tour of the dairy farm’s creamery (yes, samples are offered). In addition to the farm locations, Stensland also has two ice cream shops in Sioux Falls that serve up 20 varieties ranging from cow-themed traditional flavors Udder Me Mint Chocolate and Heavenly Holstein to seasonals such as Honey Lemon Lavender or Sweet Corn.

Note: Before visiting any of the ice cream shops highlighted here, call to inquire about their current operating procedures.