Pictured above: An easy walk takes you to the base of Grosvenor Arch in Grand Staircase- Escalanate National Monument.
Photo By Deborah H. Huso

It is early morning on a late summer day when my 11-year-old daughter and I stand before a sky-reaching spire resembling a minaret, its column bathed in red- tinged sandstone topped with a frothy white head.

“I think it looks like a ballerina,” says my daughter, Heidi. Noticing how it’s set off against the stark deep-blue sky and the eternal quiet of the high desert, I can’t disagree.

We are exploring the six-mile Panorama Trail of the aptly named Kodachrome Basin State Park in southern Utah—a welcome escape from the tourist hordes to its east and only a 30-minute drive from the hoodoos of Bryce Canyon National Park.

The Grand Circle of the American Southwest encompasses some of the most stunning scenery of the four-state Colorado Plateau, comprising New Mexico, Arizona, Utah and, of course, Colorado. It’s also home to some of the nation’s most popular (and crowded) national parks: Grand Canyon, Zion, Bryce Canyon and Arches. While this region may represent a classic vacation road trip (and, yes, Route 66 passes right through it), it’s easy to get disenchanted by the mass of fellow sightseers.

Never fear. There’s a road trip that takes you to alternatives to the traditional Grand Circle destinations that provide dramatic scenery and remarkable experiences of this American landscape. Time to take the road, or trail, less traveled.

Begin your road trip along the national monument’s 23-mile Rim Rock Drive, a slowly twisting journey through signature landscapes of the Colorado Plateau. You can access the drive from either Grand Junction or Fruita, but starting at the latter gives you quick access to the visitor center at park headquarters and an easy one-mile hike along the Canyon Rim Trail. This relatively flat walk skims the rim of the sandstone canyon and provides views of the distant Book Cliffs (which span 200 miles across the Colorado–Utah border) and Window Rock. 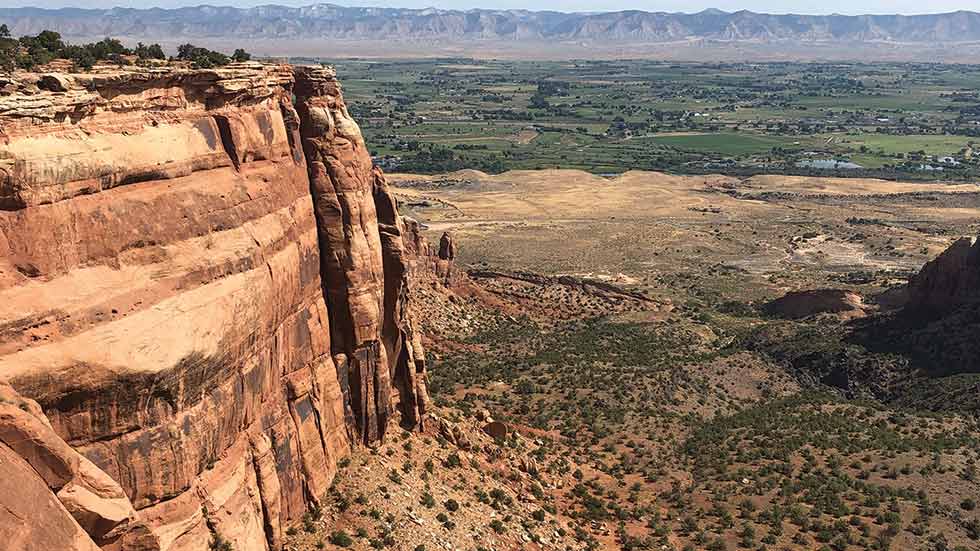 If you’re an experienced hiker, the 12-mile round-trip Monument Canyon Trail is your best bet for experiencing the full glory of the canyon’s base with its soaring spires, views of sheer canyon walls, and touching-distance access to unusual sandstone rock formations such as the Kissing Couple and Instagram-worthy Independence Monument.

If you have kids in tow, you might want to try another option near the Grand Junction entrance to the park: Devils Kitchen Trail. This three-quarter-mile trek brings you to a collection of red-rock spires enclosing a cave-like space atop an elevated sandstone mesa from which you’ll have dramatic views of the Grand Valley and the winding Colorado River. Also accessible from the Devils Kitchen trailhead is the hike through No Thoroughfare Canyon (six-and-a-half miles one way if you do the entire hike), which, because of its relative remoteness, is among the best places in the Colorado National Monument to see bighorn sheep.

To find true remoteness, however, rent a high-clearance fourwheel- drive vehicle, and take a side trip out of the Colorado National Monument along Black Ridge Road to McInnis Canyons National Conservation Area (but don’t do so without a map from the Bureau of Land Management [BLM] Field Office in Grand Junction; there’s no GPS and no cell signal to call for help if you get lost). One of two dirt and rock-laden roads will take you to the trailhead for one of western Colorado’s bestkept secrets: Rattlesnake Arches. 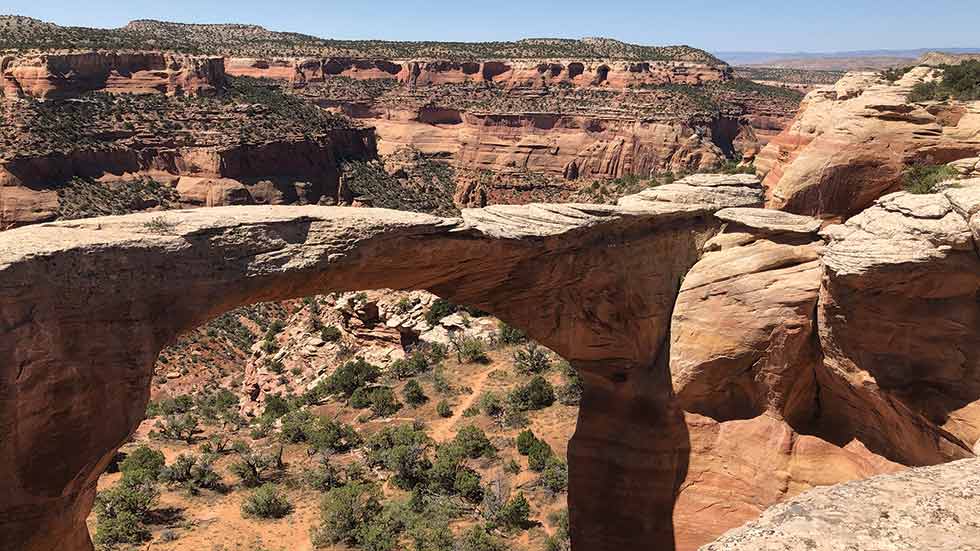 Here, you can see massive sandstone arches akin to those found in Arches National Park, but you can enjoy them (most likely) entirely alone. An approximately five-mile hike atop a high mesa or circling beneath it affords views of seven arches, ranging from delicate heart shapes to massive arched bridges that intrepid hikers might choose to cross on foot. Allow a full day for this experience, however, as the road trip to the trailhead alone will take more than an hour. And bring plenty of water, high-energy snacks—and a spare tire.

GRAND STAIRCASE-ESCALANTE NATIONAL MONUMENT, UTAH
This vast expanse of public land (and recent subject of national monument debates in Washington, DC) has it all: arches, hoodoos, slot canyons, sheer cliffs and access to the hidden Wave trail. Want to experience the grandeur of Zion without the tourist mobs? Grand Staircase-Escalante National Monument is the place.

Encompassing nearly one million acres, Grand Staircase- Escalante offers an array of access points, road trips and hiking opportunities east of Zion National Park and south of Canyonlands National Park. Entry into the national monument is almost entirely by dirt road, so make sure you have a fourwheel- drive vehicle and that you pick up a map from the BLM field office in Kanab.

If you’re looking mainly for a scenic road trip, head east of Kanab on Route 89, pass the BLM’s Paria Contact Station, and turn north into national monument lands via Cottonwood Canyon Road. Following the Paria River and Hackberry Creek, this backroad will take you on a 45-mile journey through a moonscape of gray cliffs as well as past rock formations that resemble scoops, pinnacles, and melting mounds of vanilla, strawberry and chocolate. Just before you return to paved road south of Cannonville, you can take a side trip to Grosvenor Arch. This impressive sandstone formation is a double arch that rises 150 feet. A short trail leads you directly under the arches, which were named for the legendary editor of National Geographic: Gilbert Hovey Grosvenor. 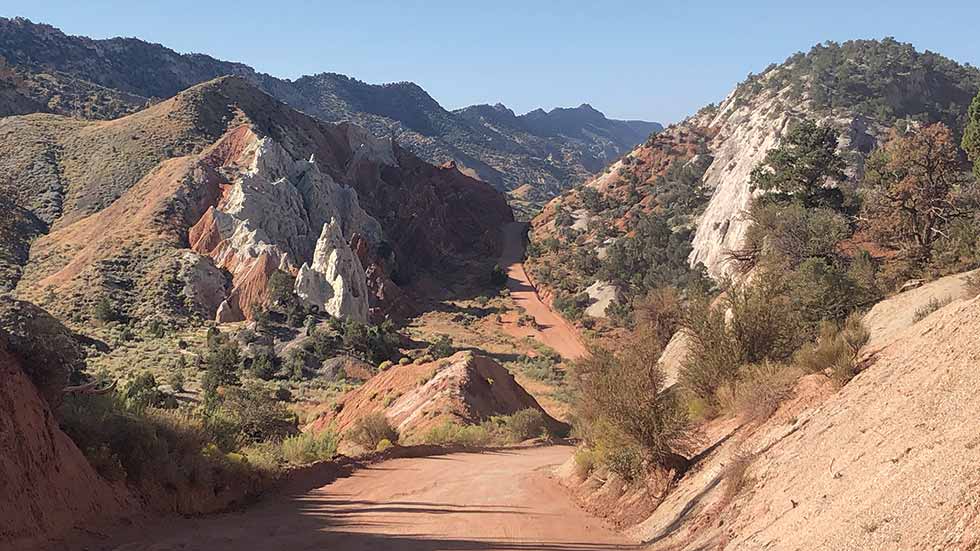 Cottonwood Canyon Road will take travelers with four-wheel drive on an awe-inspiring journey through the heart of Grand Staircase-Escalante National Monument
Photo By Deborah H. Huso

If you want to get some hiking in and experience some of the Colorado Plateau’s otherworldly slot canyons, Grand Staircase- Escalante offers a number of options. A relatively easy in-andout slot canyon hike is available at Lick Wash, accessible via Johnson Canyon and Skutumpah Roads east of Kanab. While the roundtrip hike is eight miles, you can go as far as you wish and turn around when you’re tired. You’ll hike the dry creekbed through sinuous white cliffs of Navajo sandstone.

More adventurous hikers may want to try the Wire Pass to Buckskin Gulch hike off Route 89 east of Kanab on House Rock Valley Road. (Check with the BLM office to make sure the road is passable, as it can have dangerous washouts during and after heavy rains.) Trail access via Wire Pass is about an eight-mile drive from Route 89. You can make this hike as long as you wish (20-plus miles one way if you’re up for it). Buckskin Gulch is the world’s longest and narrowest slot canyon. Only experienced hikers should attempt it, however, as washouts in the canyon can create areas where you’ll have to climb up and down rock barriers and wade through water.

KODACHROME BASIN STATE PARK, UTAH
Twenty-two miles and a world away from Bryce Canyon National Park, Kodachrome Basin State Park offers a compact and spectacular alternative. It has all the red-rocked beauty of Bryce without the traffic; plus, its family-friendly hiking trails are more accessible with much less elevation gain than those in the nearby national park.

To access the park, head southwest on Route 12 toward Cannonville, and follow the signs. Kodachrome Basin has both a campground and bunkhouses available if you want to make a long weekend of your visit. It also received a little notoriety in the summer of 2019 when the park’s only arch, Shakespeare, collapsed. 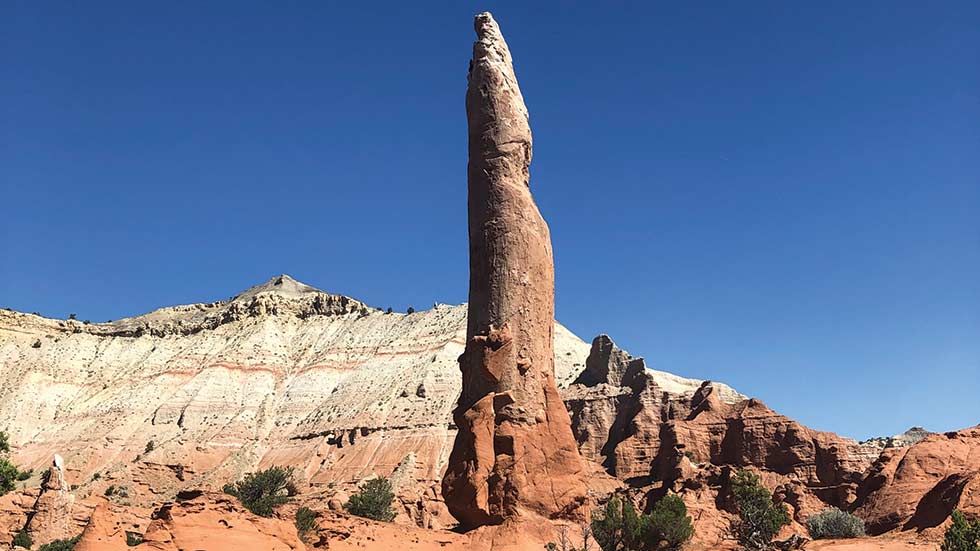 Not to worry, though: There’s plenty more to see here. Aptly named, the 2,240-acre state park is a treasure trove of rusty orange cliffs, spires and ridges made up of Entrada sandstone. You’ll also find plenty of alabaster sand pipes, caves and wildflower displays.

Kodachrome is definitely a park where you’ll want to hike to experience its full beauty. Many of the trails are easy to moderate, making them ideal for families with young children or leisurely day hikers. Among the best is the three- to six-mile Panorama Trail, which is peppered with white chimneys towering up to 50 feet off the desert floor as well as orange sandstone slabs, squatting rock domes and long views of the Pink Cliffs of the Paunsaugunt Plateau to the north. Many of the park trails are also open to cycling.

HAVASUPAI INDIAN RESERVATION AND HAVASU FALLS, ARIZONA
Want to see one of the world’s seven natural wonders without throngs of tourists? You can experience a hike to the base of the Grand Canyon without ever entering the internationally renowned national park. Head west, and enter the sacred lands of the Havasupai tribe, who own some of the most surprisingly lush and visually striking areas of America’s greatest natural wonder.

The Havasupai Indian Reservation consists of 185,000 acres of some of the Grand Canyon’s most awe-inspiring scenery. There is a reason this tribe is known as the “People of the Blue Green Water.” This most isolated American Indian reservation and the only place in the country where mail is still delivered via pack mule, Havasupai has the distinction of being at the center of a desert oasis where tumbling waterfalls cascade into aquamarine pools and creeks amid towering canyon walls. 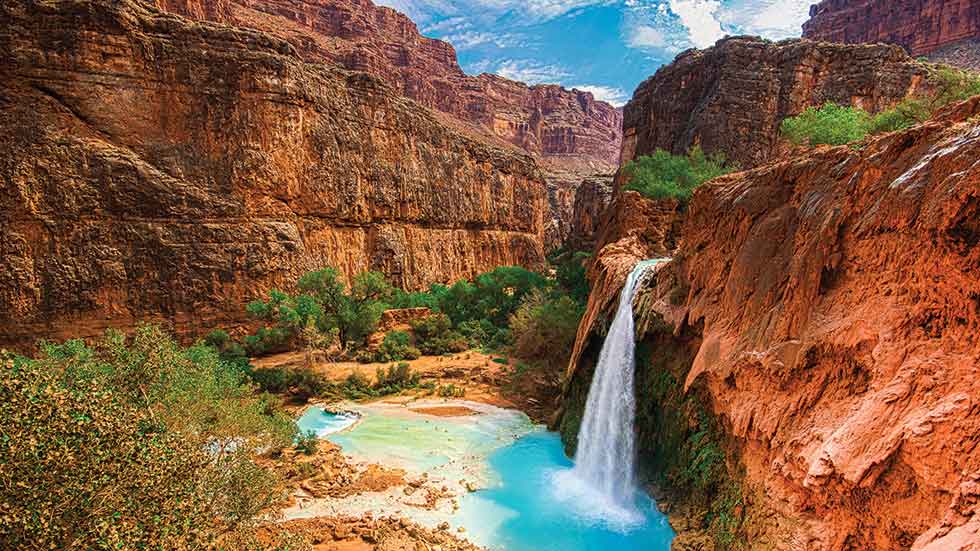 A nearly 10-mile hike on a strenuous trail on the Havasupai Indian Reservation will take intrepid travelers to some of the most stunning waterfall scenery in the Grand Canyon.
Photo By Deborah H. Huso

The only way into this arid paradise is on foot. From famous Route 66, just east of Peach Springs, Arizona, you’ll take the sinuous Hualapai Hilltop Highway to the trailhead for Havasu Falls. Note that you cannot enter the reservation or take this hike without reservations. The tribe does not permit day hiking, and you will need to make reservations anywhere from four months to a year in advance to camp in Supai Village or stay at the lodge.

An eight-mile steep, strenuous trek down Hualapai Canyon will bring you to the secluded village of Supai, which is home to a post office, fire department, school, lodge, cafe and store. Hike a mile farther for glimpses of the first two falls of this canyon: Fifty-Foot Falls and Navajo Falls, boasting aquamarine cascades. Another half-mile will bring you to the trail’s namesake: Havasu Falls, which drapes over the orange sandstone cliffs in a frothy cerulean cloud surrounded by surprisingly lush vegetation.

After an overnight rest at the campground or lodge, check out Mooney and Beaver Falls the next day, and maybe even trek an additional seven miles to the Colorado River. Keep in mind that you’ll have to hike back out again. Or arrange for a helicopter ride out of the canyon to the Hualapai Hilltop parking area.