I’ve decided there’s probably no such thing as a one-time visitor to the Inn at Perry Cabin because once you’ve been there, you’ll be eager to return. I have stayed three times at this waterside resort that regularly earns kudos from the likes of Travel + Leisure, Condé Nast Traveler, Southern Living and The Knot, and if I have my way, my number of visits will hit double digits before the decade is out. For those unfortunate readers who have never experienced the premier resort on Maryland’s Eastern Shore, allow me to enlighten you about why it’s one of my favorite retreats.

PRETTY-AS-A-POSTCARD SETTING
The Inn at Perry Cabin sits on a pristine 26-acre property alongside the scenic Miles River just at the edge of St. Michaels, a town of about 1,000 residents that attracts the majority of visitors to the quieter side of the Chesapeake Bay. More than two-thirds of the inn’s 78 guest rooms and suites have balconies or patios with views of the river, as does the primary restaurant, STARS.

There’s something truly exquisite about waking up on a leisurely weekend morning, opening the drapes and, steaming cup of coffee in hand, stepping out onto a patio fronted by a green expanse of lawn leading down to the water. Even if you don’t have a water view from your guest room, numerous seating areas invite guests to sit awhile and enjoy the view. There are even fire pits to gather round on crisp autumn and winter evenings. 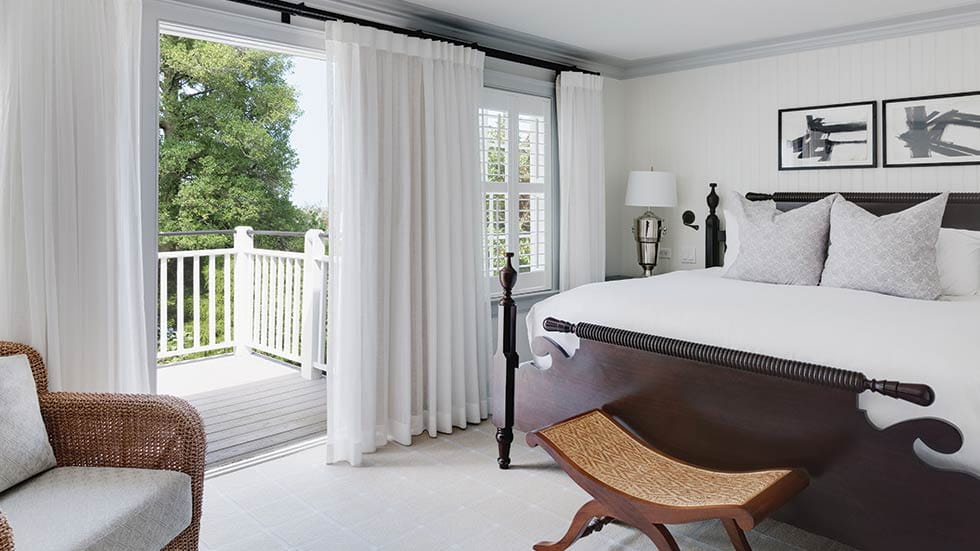 HEROIC HISTORIC CHARACTER
The inn’s membership in Historic Hotels of America informs you that the property, however new and up-to-date it looks, has a story to tell. The enviable plot of land on which the inn now sits was snapped up after the War of 1812 by one of the war’s heroes: Samuel Hambleton, aide-de-camp to Commodore Oliver Hazard Perry. Hambleton established a farm on the property and built a Greek Revival manor house, naming it Perry Manor after his esteemed friend.

The acreage was farmed for the next 140 years or so and then served as a riding academy for the wealthy equine set for another three decades before finally welcoming its first guests as the Inn at Perry Cabin in 1980. All that time, the original manor house built by Hambleton remained. Today, the stately home is the core of the much-expanded inn. Ask the concierge or another employee to point out the rooms, including the cozy little library near the lobby, that compose the original manor house.

SLEEK, SINK-INTO-COMFORT ROOMS
Embracing its location in one of the great maritime towns in the US, the inn was completely redecorated just three years ago with understated nautical character. Clean lines and sparingly used accents preserve an open, airy feeling throughout the inn, with common areas and guest rooms furnished in richly toned wood pieces and unpretentious yet oh-so-comfortable upholstered seating in shades of ivory, cream and the gentlest beige. An ultra-comfy bed made up in soft linens and plump pillows invites a pre-dinner nap. Be sure to hang the blue monkey’s fist on the door; the knot used by boaters to provide weight to the end of a rope is the inn’s unique “Do Not Disturb” sign.

DIVINE FOOD
The marquee dining venue at the inn is the aptly named STARS, serving breakfast, lunch and dinner indoors or out. Ingredients for meals are sourced from local waters, nearby farms and area purveyors, and the inn’s own gardens and orchards. From late afternoon to late night, you can indulge in cocktails and casual fare at Purser’s Pub. If you’re at the inn with a special someone or maybe a group of friends, you can even order up private dining in a setting of your choosing at the inn.

Check into dining options downtown as well. For a casual lunch, try Ava’s Pizzeria and Wine Bar for brick-oven or Detroit deep-dish pizza; eat on the patio, which features a fireplace. For standout dinners, head to 208 Talbot, whose longtime chef, David Clark, has been voted Best Chef on the Eastern Shore, or Bistro St. Michaels, which serves American fare with a European twist. Or, sit at a picnic table on the partially covered deck at the waterfront Crab Claw for a seafood feast featuring the regional specialty: steamed Maryland blue crabs liberally dusted with Old Bay seasoning.

AMENITIES FOR STAYING ACTIVE OR SLOWING DOWN
From early April through mid to late October, you can arrange to be taken out of the Chesapeake Bay on one of the inn’s sailboats or motorboats, or you can explore the river and harbor on your own using the inn’s kayaks or paddleboards. 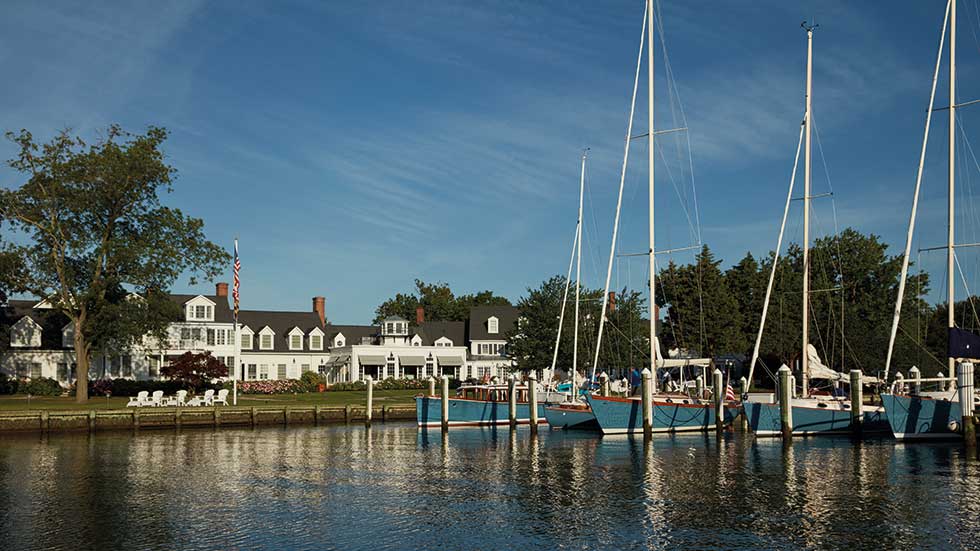 Golfers can take to the Links at Perry Cabin to play on a Pete Dye- designed course that wends through woodlands and manmade dunes to the grand finale 18th hole with its attention-getting views of the Chesapeake. Three Har-Tru courts and a tennis pro are available for the racquet set, and you can play old-time lawn games such as croquet and bocce. Or, borrow some bikes to pedal into town or to explore the quiet country roads.

In warmer months, relax poolside or with a dip in the privacy-screened outdoor pool. At any time of year, be sure to reserve some time to be spoiled with a massage, body treatment or facial at the Spa at Perry Cabin.

PLACES TO EXPLORE BEYOND THE GROUNDS
Surrounded by such beauty and with access to so many activities, you could easily ensconce yourself at the inn for a weekend and never set foot off the property. But those who want to explore can walk a short path through the woods to the Chesapeake Bay Maritime Museum, an open-air museum dedicated to life on the bay—from the watermen who make their living from its bounty to the ships that ply its waters. St. Michaels’ main drag, Talbot Street, offers just the right number of boutiques, galleries and souvenir shops for whiling away a few hours on a lazy afternoon.

I have yet to visit the Inn at Perry Cabin in 2020, so I need to get stay numberr four on my calendar soon. Perhaps I’ll see you there.

Where the Pros Go: Cambodia

Going with the Flow
See all Traveler Worldwise Articles