Millions of people visit Ireland each year, whether to view the breathtaking scenery and landscape, enjoy the hearty and mouth-watering food, or pour a pint of Guinness. The Irish hospitality is said to be the friendliest you’ll encounter, and there’s no shortage of music, culture, and art along the way.

Ireland is also known for their castles, some of which are hundreds of years old, and few are still privately owned and lived in by locals. Be inspired by these unique landmarks while you’re checking a visit to Ireland off your bucket list. Here’s our list of the most beautiful Irish castles. 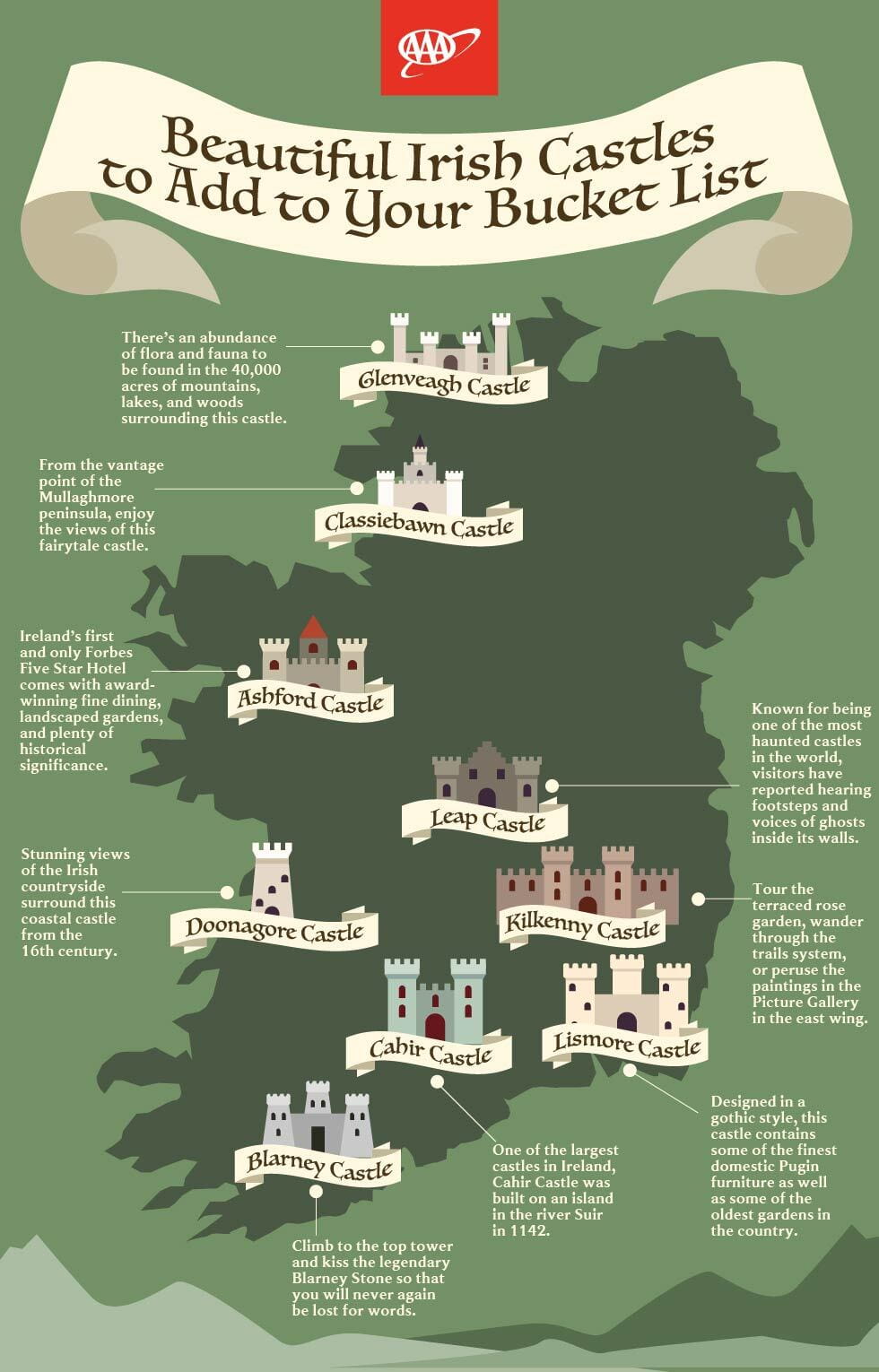 KILKENNY CASTLE
Located in Kilkenny, Ireland, and founded after the Norman conquest, this castle has been rebuilt, extended, and adapted over the last 800 years, 600 of which were under the Butler family. Situated on 50 acres of parkland with trees, flowers and wildlife—particularly in the terraced rose garden or around the man-made lake—there is also a tearoom, playground, and trails to enjoy. Visitors can also view the library, drawing room, nursery, and other bedrooms decorated from the 1830s. Find the Picture Gallery in the east wing, which was built to house the Butler family’s collection of paintings. 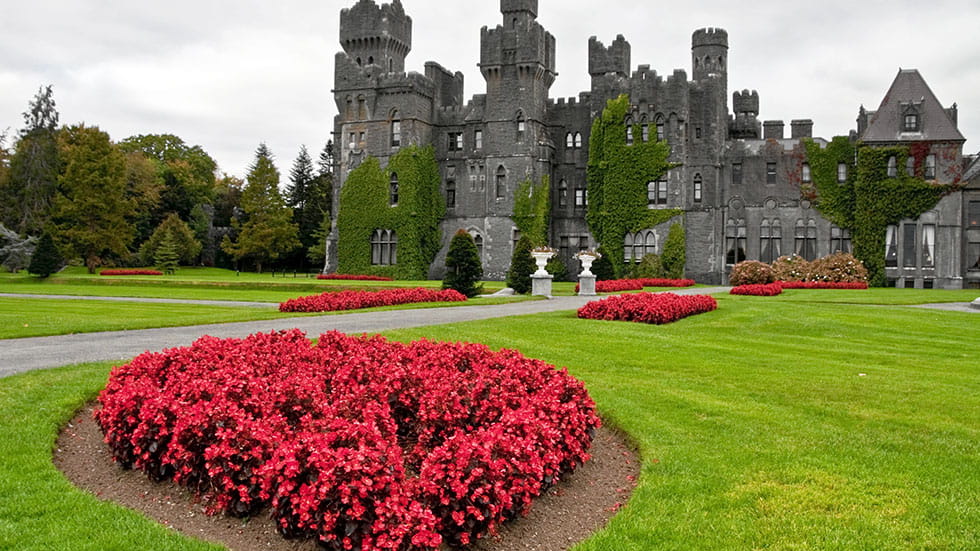 ASHFORD CASTLE
Former home of the Guinness family, Ashford Castle and Estate is now Ireland’s first and only Forbes Five Star Hotel. Built more than 800 years ago and set on 350 acres near Cong on the Mayo-Galway border, visitors can stroll through landscaped gardens, ancient woodland, and around the lake. Experience grandeur in one of the 83 rooms and suites, and enjoy various activities, award-winning fine dining, and historical significance. 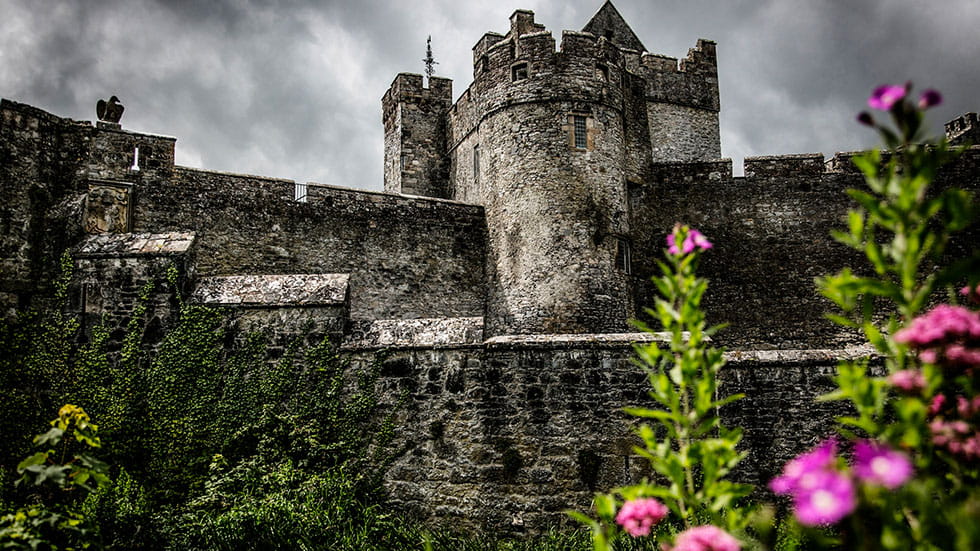 CAHIR CASTLE
Cahir Castle is one of the largest castles in Ireland, and was built on an island in the river Suir in 1142. Another castle that served the Butler family, it was designed to be impregnable (though it was besieged three times throughout its history). Built with cutting-edge design, much of the original structure remains. Stroll around at your leisure to take in the authentic interior and views of the surrounding scenery and river, including Inch Field park located just outside the walls. 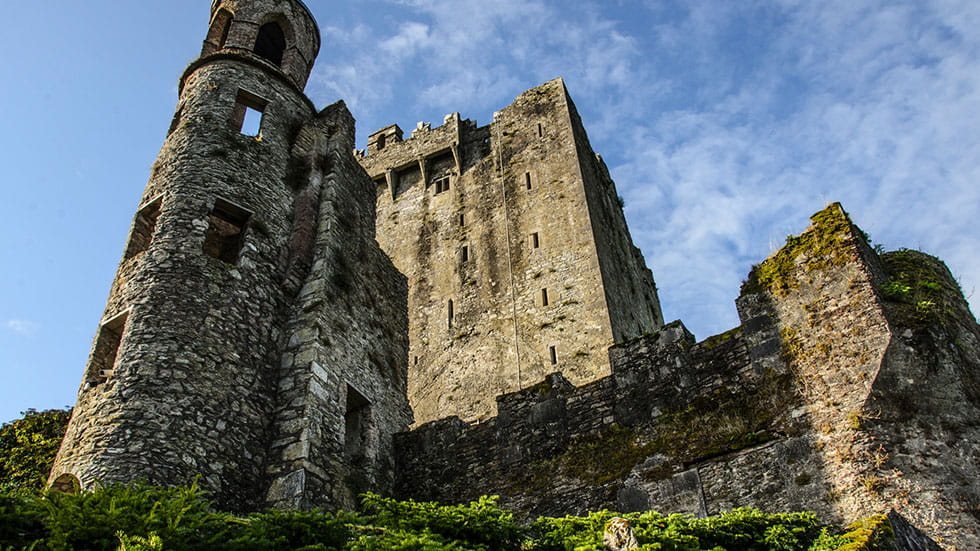 BLARNEY CASTLE
Built nearly 600 years ago, millions visit Blarney and the Blarney Castle each year. Home to the Blarney Stone, the legendary Stone of Eloquence, travel to the top tower to kiss the stone and never again be lost for words. Leave plenty of time to stroll through the more than 60 acres of gardens, avenues, arboretums and waterways surrounding the castle, or descend the “Wishing Steps” to enter a scene that seems straight out of a fairytale. 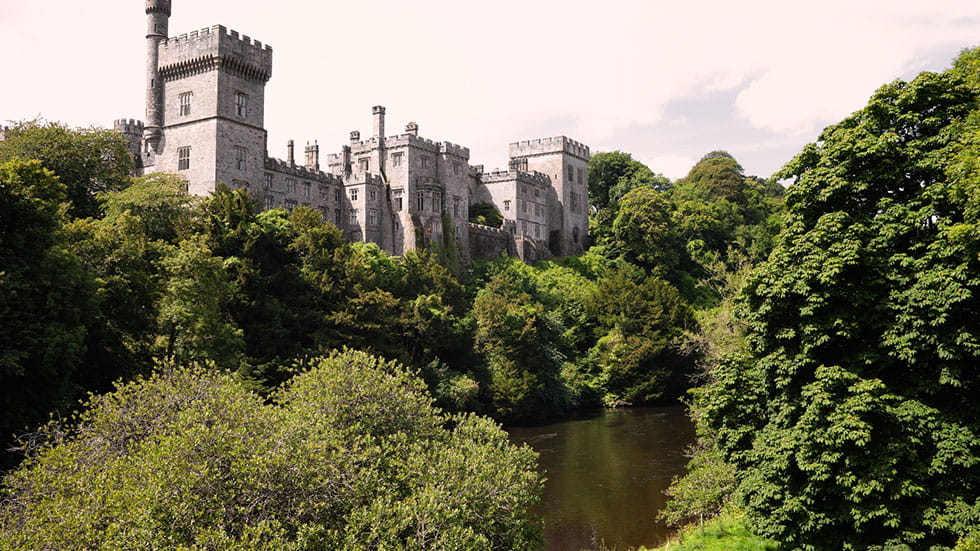 LISMORE CASTLE
Located in the town of Lismore, this castle is the Irish home of the Duke of Devonshire. Originally built in 1185 by King John, it’s designed in a Gothic style and contains some of the finest examples of domestic Pugin furniture still in private hands. The gardens, which expand over eight acres, are believed to be the oldest in Ireland and still retain much of their original form. You can now even rent out the castle for family gatherings and celebrations. 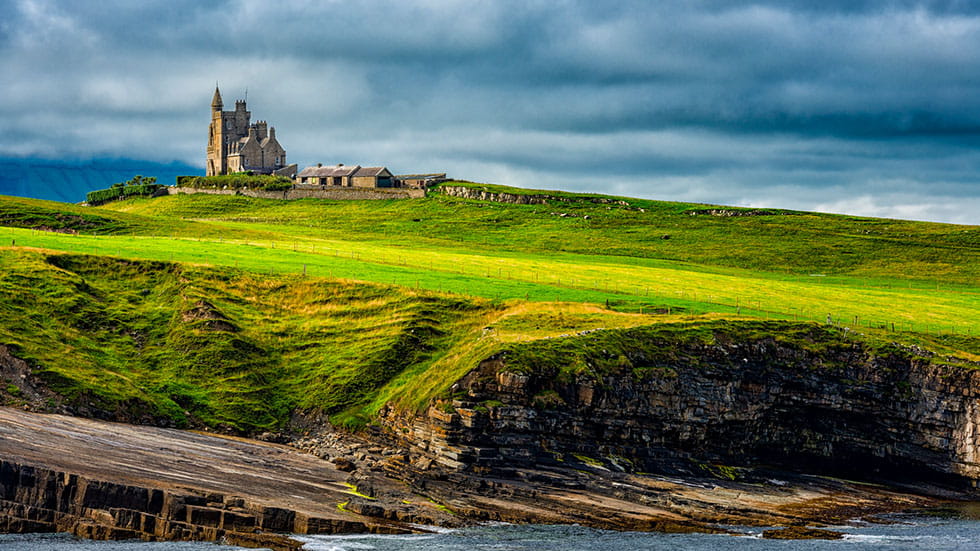 CLASSIEBAWN CASTLE
Close to the head of Mullaghmore on County Sligo’s Wild Atlantic Way, this castle’s estate exceeded 6,000 acres when first built. It’s made almost entirely from stone brought by sea from Donegal and was completed in 1874. Until nearly 1950, the castle was lit only by oil lamps and candles, and fresh water was carted by donkey one-fourth-a-mile uphill or via rainwater. Now, the castle is modernized, and while almost out of a fairytale, you can’t get too close since it’s on private property. However, it can be seen as you travel along the Mullaghmore peninsula. 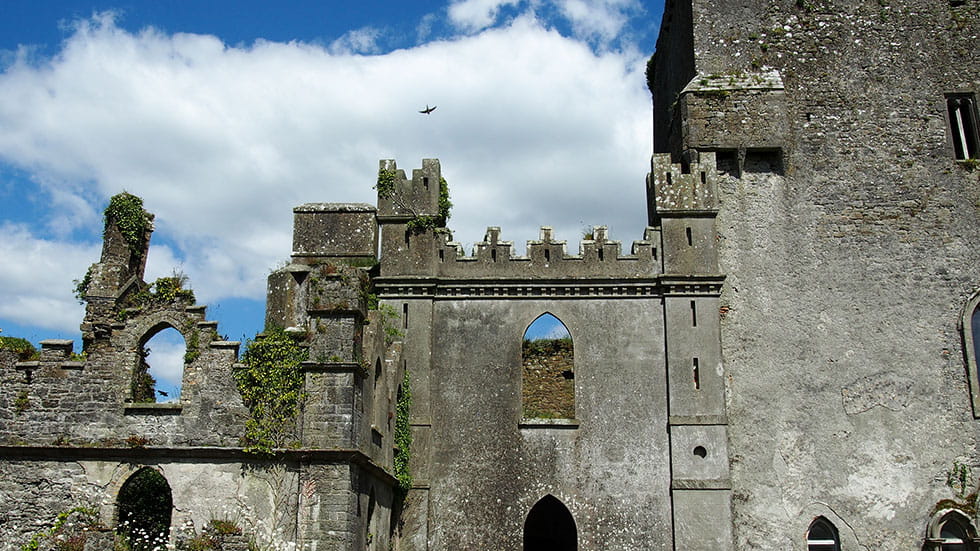 LEAP CASTLE
You’ll find Leap Castle in Coolderry, County Offaly, Ireland, but be aware when you go—it’s considered one of the most haunted castles in the world. The disturbing history comes from it being used as a fortress, home, and a tomb after being built in the early 1500s. Owners claim to see ghosts, hear footsteps, door openings and closings, and crowds talking, and many visitors claim to have felt their presence as well. 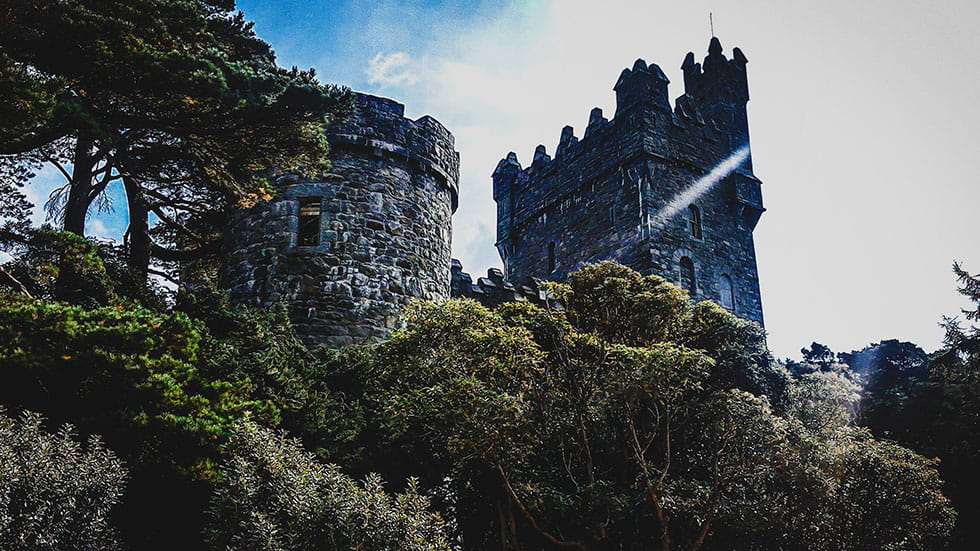 GLENVEAGH CASTLE
Built in the early 1870s, it’s construction in the remote mountain setting was inspired by the Victorian idyll of a romantic highland retreat. It’s located in Glenveagh National Park, County Donegal, Ireland, and consists of a four-story rectangular keep, surrounding gardens, and more than 40,000 acres of mountains, lakes, glens, and woods. The castle gardens have a multitude of exotic and fantastic plants, and you can find an abundance of wildlife in the wilderness surrounding the castle. 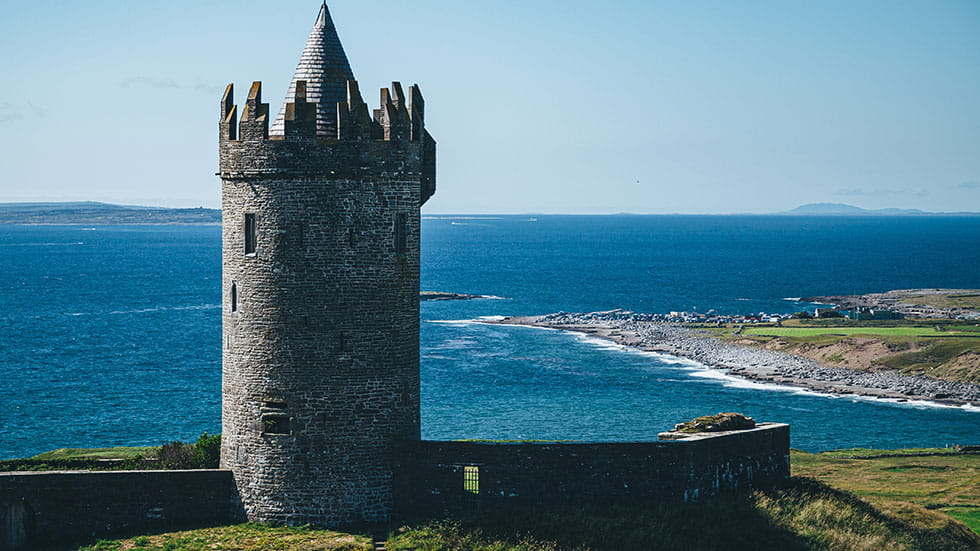 DOONAGORE CASTLE
Find this 16th-century tower house just south of the coastal village of Doolin in County Clare. Its name, which is believed to mean “the fort of the rounded hills” or the “fort of the goats” offers stunning views of the Irish countryside. While there’s no way to actually enter the castle since it’s privately owned, it’s still used as a navigational point for the boats and ferries that are making their way into Doolin Pier. 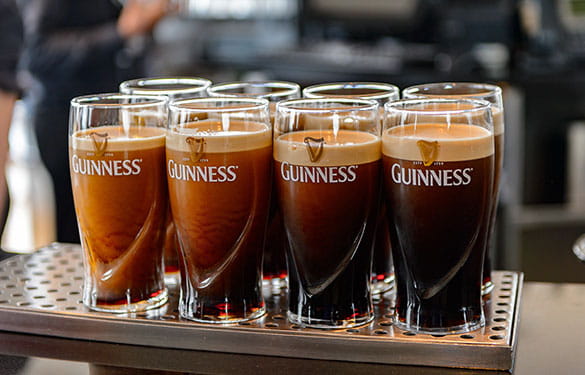 Traveler 360
Do You Know The Right Way To Pour A Guinness? 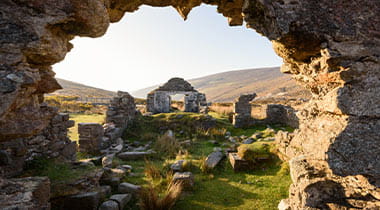