A GUIDE TO THE ULTIMATE SANDWICH OF PHILADELPHIA

Ahh, the Philly cheesesteak, a glorious amalgam of mounds of thinly sliced, chopped or shaved sautéed ribeye steak smothered in melted cheese and cradled in a fresh-baked long roll. Not that we need an excuse to enjoy a cheesesteak, but since National Cheesesteak Day is upon us, it’s only right that we wax poetic about this gastronomic delight that’s become a cultural institution and, frankly, is deserving of its own food group in the City of Brotherly Love.

Seriously, though, we understand that Philadelphians are as passionate about their cheesesteaks as they are about their sports teams, so we wouldn’t dare to declare definitively where to get the best cheesesteak in town.

But if you’re as enthusiastic about cheesesteaks as we are (we’ve been known to justify a road trip for the simple pleasure of this grilled-up goodness), may we suggest a stroll through cheesesteak history, some tips on how to order a cheesesteak (yes, there’s a protocol) and a few of our favorite places that serve them up so well? 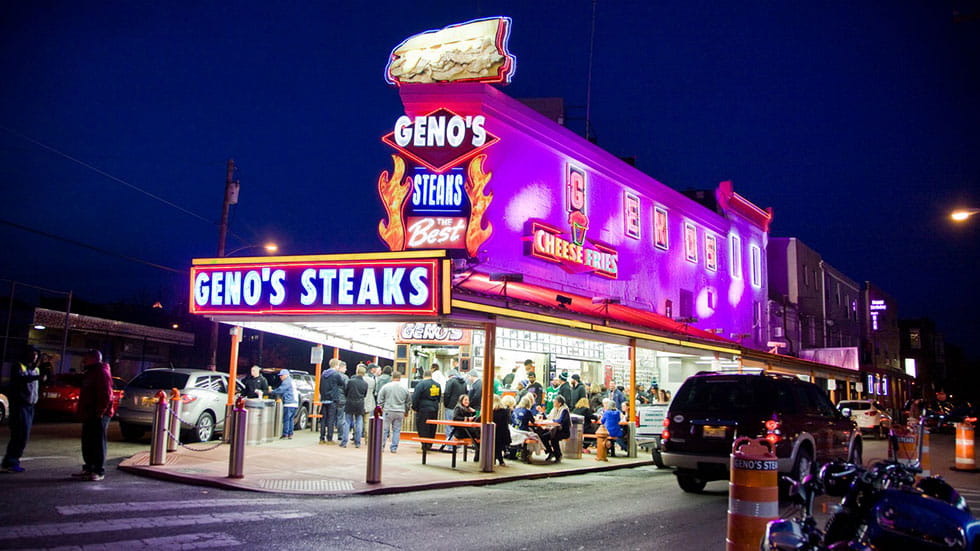 A SANDWICH STAR IS BORN
You haven’t had a cheesesteak unless you’ve had an original cheesesteak in South Philly in the place—er, the places—where it was invented.

Flash back to 1930. As the story goes, Pat Olivieri, then a hot-dog vendor, was cooking up some beef when a taxi driver, smelling the aroma, stopped to ask for a “steak sandwich.” Word spread, and soon thereafter, Olivieri debuted Pat’s King of Steaks on E. Passyunk Avenue.

Just across the street at rival Geno’s Steaks, however, another story prevails. The late Joey Vento, who founded Geno’s (named after his son and now the shop’s owner-operator) in 1966, claimed that he was the originator of adding cheese to create the “cheesesteak.”

Of course, the winners in this spirited competition between these family-run businesses are always the cheesesteak-consuming customers. 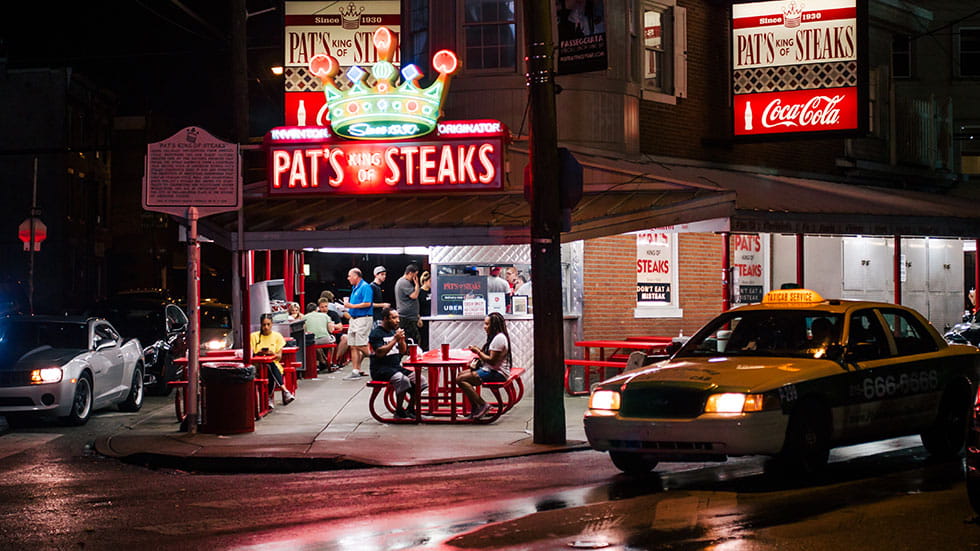 MADE TO ORDER
Whether you prefer Pat’s or Geno’s—their neighboring locations and 24/7 hours make it easy to try both—or any of the city’s slew of eateries that make a mean cheesesteak—there’s an art to ordering this culinary masterpiece.

For starters, know that the standard cheese for a cheesesteak is Cheez Whiz, with American or mild or sharp provolone acceptable alternatives. First, order your cheese: “Whiz,” “American,” or “provolone” (or “provy”). Next, if you want fried onions on your cheesesteak, order “wit,” or for no onions, say “widout.” Finally, request any toppings (if they’re offered), such as ketchup, mustard, relish, sautéed mushrooms, and/or hot or sweet peppers. So, if you want two cheesesteaks with Cheez Whiz and onions, for example, order “two Whiz wit.”

Just order decisively and have your payment at the ready to keep the line moving and the cheesesteaks a-coming. 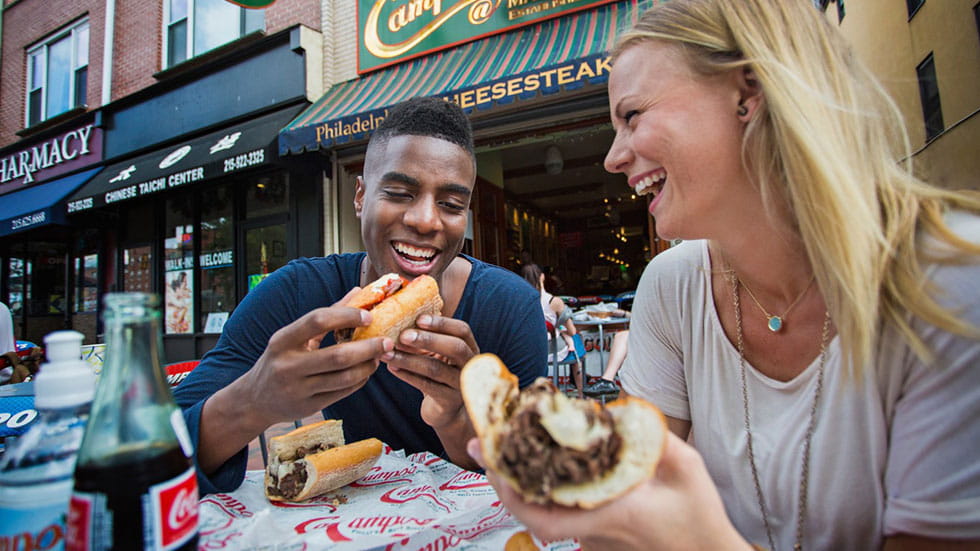 THAT HITS THE SPOT
You know a good cheesesteak when you see it: a mouthwatering sandwich oozing quality ingredients, from fresh-off-the-griddle smoldering steak to gooey cheese to a firm-on-the-outside, spongy-on-the-inside Italian roll.

Like those served at Dalessandro’s Steaks & Hoagies in Roxborough, a perennial Best of Philly winner that’s perfected the cheesesteak over the past half-century, and at nearby Chubby’s Cheese Steaks, known for its piled-high heaps of steak.

And there’s John’s Roast Pork in South Philly, renowned (as its name suggests) for its roast pork sandwiches but also for its Ultimate Cheesesteak, packed with 12 ounces of meat. Also in South Philly, you can’t go wrong satisfying your cheesesteak hankerings at the 24-hour stand Philip’s Steaks; the 1936 “grocery store” Cosmi’s Deli; and 24-hour late-night hot spot Oregon Steaks.

On South Street, Jim’s South St. often has lines wrapping around the building (and worth the wait), and Ishkabibble’s is celebrated as the originator of the chicken cheesesteak. 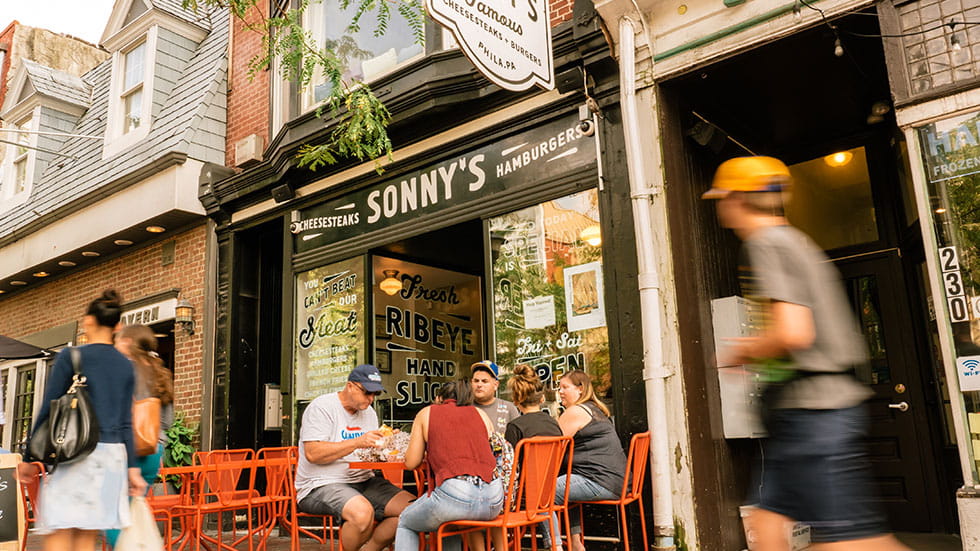 In Old City, Campo’s Deli, a mainstay since 1947, is beloved for its cheesesteaks, and neighboring Sonny’s Famous Steaks has received props from US News & World Report.

Also receiving rave reviews in US News & World Report is Steve’s Prince of Steaks in North Philly (and beyond), where its traditional cheesesteak reigns supreme. Also with multiple locations, Joe’s Steaks + Soda Shop has been using the same award-winning cheesesteak recipe for six decades, and Tony Luke’s slings delicious cheesesteaks at 17 stores (and counting).

We could go on and on, but we’re hungry. And it’s time to celebrate National Cheesesteak Day. Mangia! 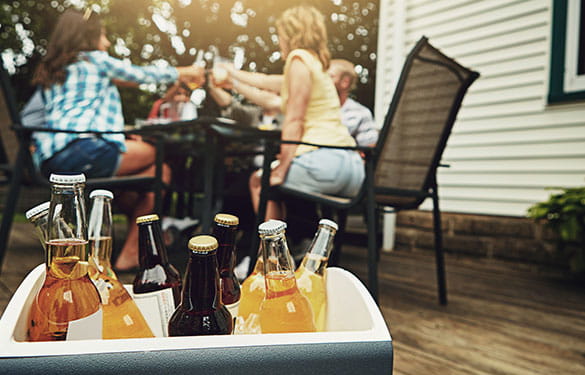 How To Pair Beer With BBQ This Summer 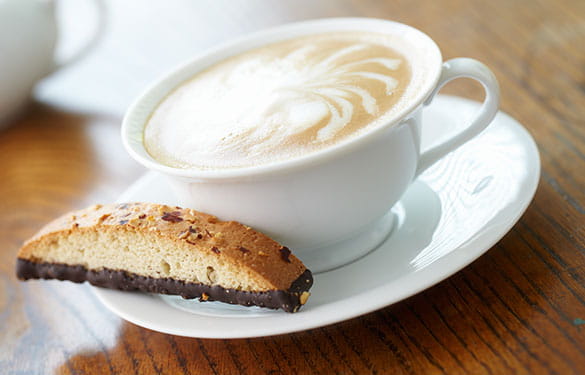 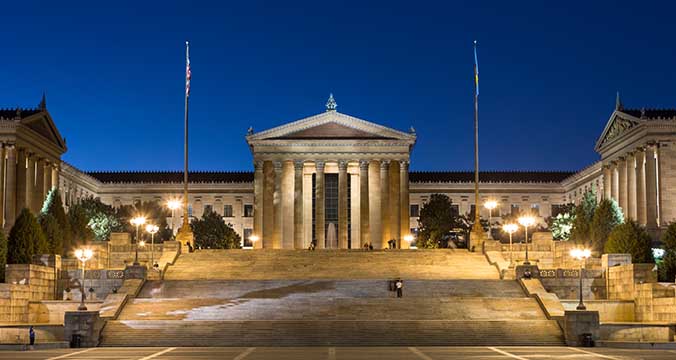 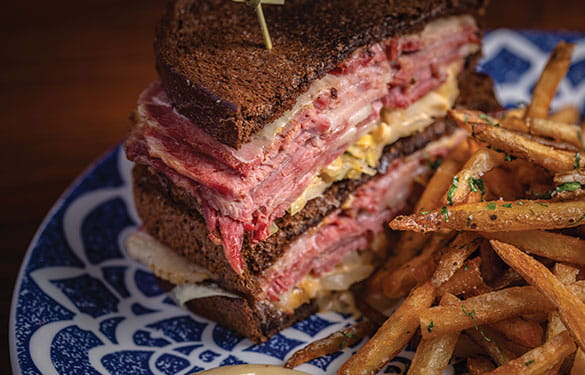