If you were to stand smack-dab in the middle of Philadelphia’s Reading Terminal Market and close your eyes, it’d be easy to imagine a bygone era when droves of farmers, fishermen and other food purveyors converged in this market under the Philadelphia and Reading Railroad Company’s elevated train shed and tracks. Masses of people from all walks of life gathered at the market, chockablock with aisles of food stalls selling fresh produce, meats, milk, eggs, butter and the like. Opened in 1893, Reading Terminal Market is one of the nation’s oldest and largest public markets, and today you can still hear vendors and shoppers in that familiar exchange of goods, currency and pleasantries and still smell the aromas of foods that are local, seasonal, fresh and, yes, affordable.

Thanks in large part to Americans’ growing interest in eating and shopping local, Philadelphia’s historic market is brimming with more than 80 owner–operator merchants who sell everything from artisanal cheeses and made-from-scratch condiments, to hand-rolled soft pretzels and authentic Philly cheesesteaks, to house-made Amish doughnuts and Latino street food—all under the roof of a National Historic Landmark building. 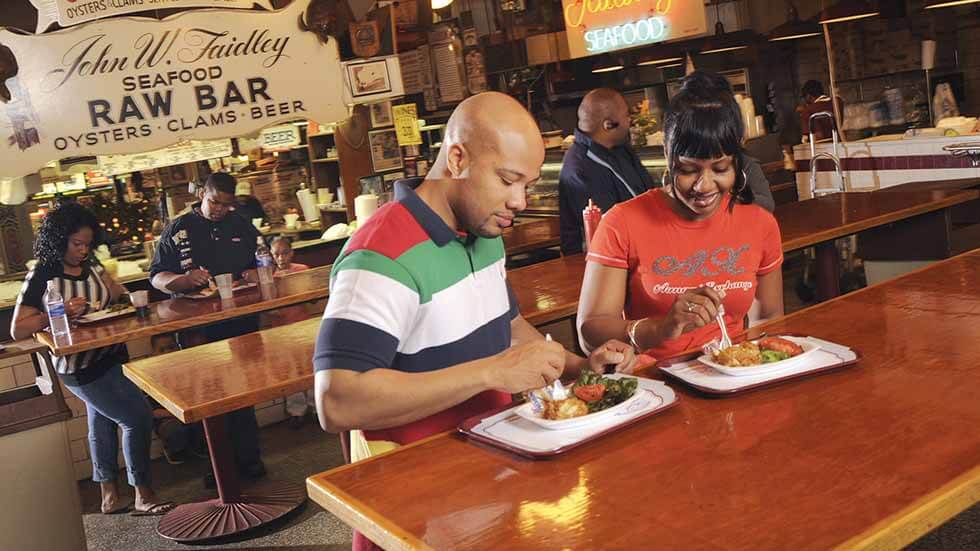 Purveyors include Philadelphia institutions such as Bassetts Ice Cream, America’s oldest ice cream company and the first merchant to sign a lease in the market in 1892; more than 40 flavors of Bassetts ice cream are handcrafted with cream and milk from nearby Pennsylvania farms, doled out to patrons lining up at the original marble counter. Another market mainstay, DiNic’s set up shop here in 1980 and continues to serve up its legendary roast pork sandwiches, which landed the title of Best Sandwich in America in 2013 on the Travel Channel’s Man v. Food. And owned and operated by the same family since 1984, Beiler’s Bakery, famous for its fresh-baked doughnuts and whoopie pies, was among the earliest Pennsylvania Dutch merchants to hang a shingle in the market. The dozen or so Pennsylvania Dutch stalls (most of which are closed on Sundays) are a major draw to the market, contributing to its commercial and cultural synergy.

Every week, an estimated 100,000-plus residents and visitors explore the market, which ranks among Center City Philadelphia’s top tourist destinations.

“Public markets are as popular as ever because they reflect the community in which they are located. What better way is there to experience a culture than to wander through a public market, talk to local vendors and customers, and shop for local items?” says Kelly Verel, vice president of the New York-based nonprofit Project for Public Spaces. “After World War II, many of our local food systems and public markets disappeared, and in their place, we got shopping malls and supermarkets. Now, there is renewed interest in eating locally and supporting local agriculture…. And despite a decline in traditional retail, public markets are growing because they offer unique, social retail experiences.” 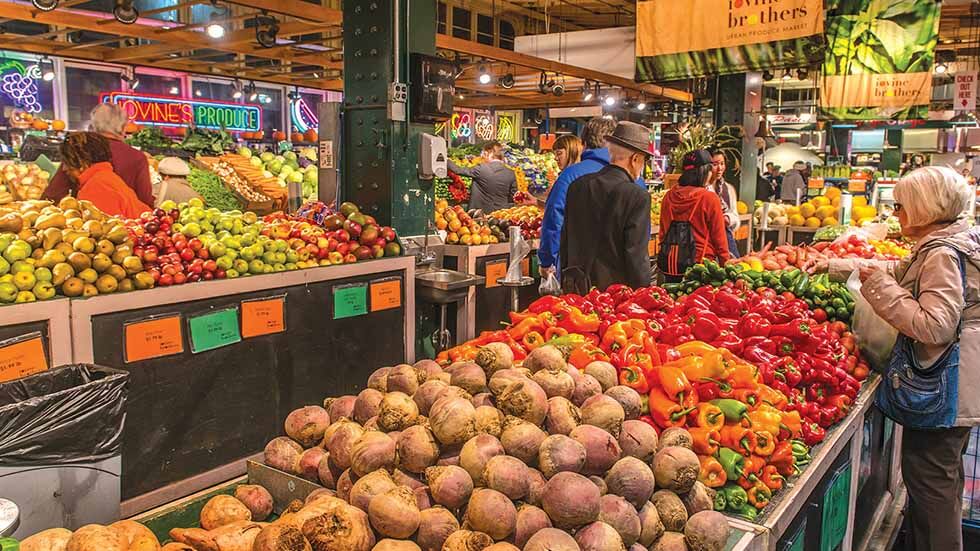 CITY SAMPLERS
Across the country, dozens of historic markets bustle with a panoply of vendors and customers—young and old, rich and poor—and offer a melting pot of fresh foods in a central location, appearing not as a polished showcase but, rather, as a genuine microcosm of the city through its gastronomic mélange.

Among them is the nation’s oldest market, Lexington Market, founded in 1782 and operating on the same ground in the heart of Baltimore for nearly two-and-a-half centuries. Passing through the market (then called the Western Precincts Market, before it was renamed after the Battle of Lexington), Ralph Waldo Emerson declared Baltimore “The Gastronomic Capital of the World.” Nowadays, the market is home to more than 100 merchants, including Faidley’s Seafood, founded in 1886 and still operating in its original location, where customers stand around tall communal tables to enjoy the Faidley family’s renowned lump crab cakes; Konstant’s Nuts, which has been a market staple since 1896 and still roasts its famous peanuts the old-fashioned way: in a cast-iron roaster that’s been pumping out peanuts since the early 1900s; and Mary Mervis Delicatessen, which has been serving up the same beloved menu items—shrimp salad, corned beef, salami, pastrami and more—to generations of families. Merchants will remain open as the market undergoes a much-needed $40 million makeover that will include construction of a new building (breaking ground this month) and an urban plaza that will host farmers’ markets and community events. The project is expected to be complete in summer 2021. 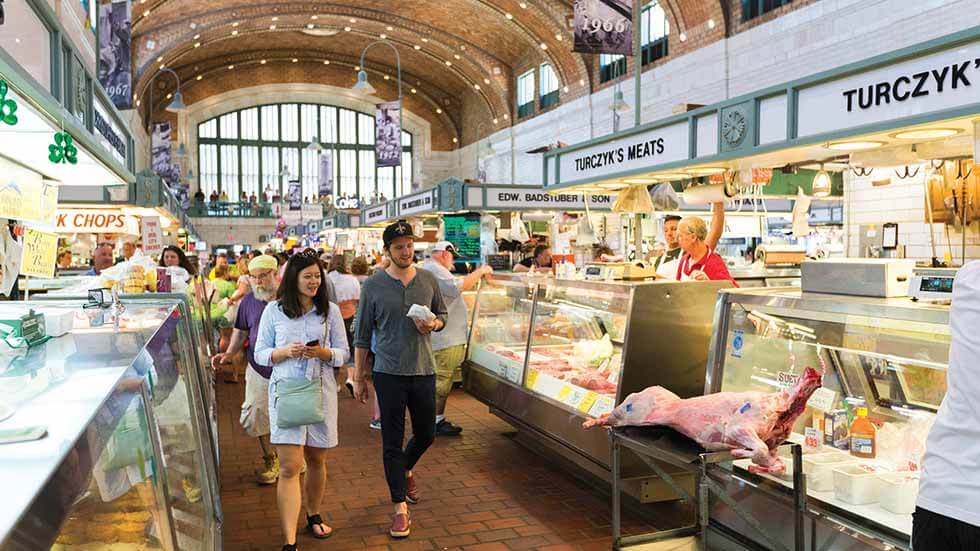 Another market icon, West Side Market in Cleveland opened its doors in the Ohio City neighborhood in 1912 and has remained open ever since, making it the city’s oldest continuously operating public market—the only one of its three public markets from the early 20th century still standing.

Punctuated by its massive main building with a 44-foot-high arched tile ceiling and a 137-foot-tall clock tower, the indoor/outdoor market presents a smorgasbord of some 100 vendors dishing up everything from pierogis to falafel, fresh produce to handmade pasta. Among the market anchors is Irene Dever, who’s been offering hand-cut butter, fresh-ground peanut butter, local maple syrup and homemade pierogis since 1971. Another commercial stronghold, Frank’s Bratwurst still serves its original-family-recipe brat sandwiches, which have been a market must-do since 1970. The two share market space with other generations-old purveyors and newer vendors hawking small-batch fair-trade coffee, filled-to-order cannoli, organic produce and more. 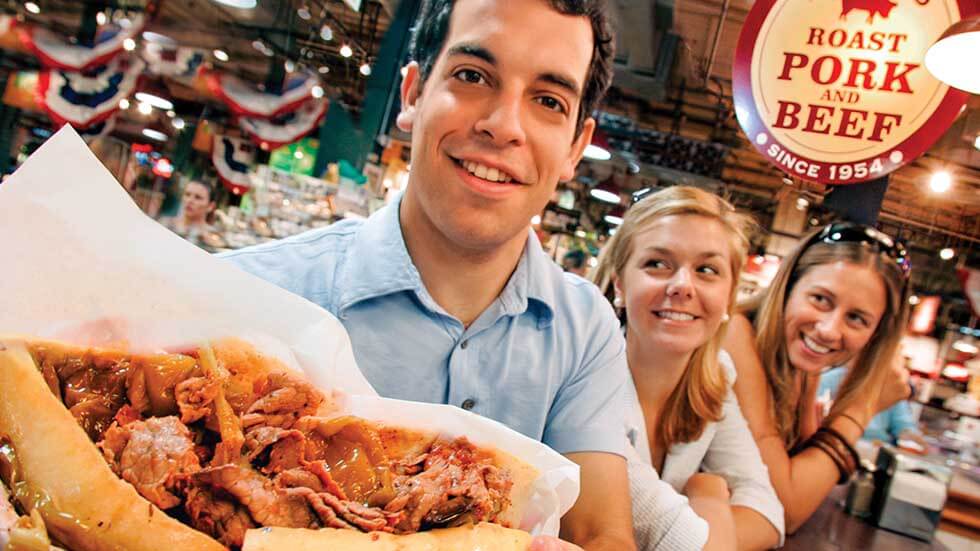 Pike Place Market—perhaps most famous for its Pike Place Fish Market fishmongers, who holler orders and throw fish before wrapping them for sale—opened in 1907 on the Seattle, Washington, waterfront. The original “Meet the Producer” inspiration for the market continues today, with farmers’ markets and owner–operator fish markets (Pike Place Fish Market is one of four), butcher shops, bakeries, produce stands, specialty food stores and more. Some 15 million annual visitors pass through the nine-acre historic district that composes the market, which features more than 500 independent small businesses, including 80 eateries ranging from take-out to fine dining. While shopping for and enjoying fresh, local foods on-site—maybe even catching a flying fish—check out the crafts market, take in entertainment from buskers, and drop some cash in the 550-pound bronze piggy bank named Rachel. Pike Place is also a residential community, and proceeds from Rachel benefit social services in the market.

We could go on and on about the cornucopia of fresh food and hospitality at America’s historic public markets—shout-outs to Eastern Market in Washington, D.C.; the French Market in New Orleans; Eastern Market in Detroit; Charleston City Market in South Carolina; Historic Market Square in San Antonio; and the list goes on—but we’re hungry, and there’s a fresh, local, homemade dish of deliciousness waiting for us at the market. 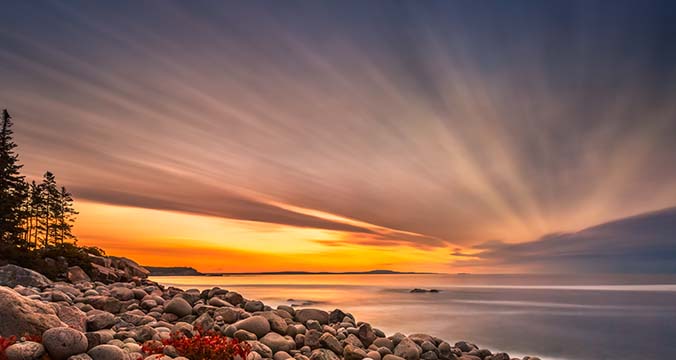