Amber chandeliers softly light the dining room of the Pinnacle Grill on Holland America Line’s Rotterdam, the light from the nearby glass-enclosed wine room casting a glow on the place settings. As Master Chef Rudi Sodamin enters, he scans the tables, looking for any slight imperfections.

“Most cruise lines don’t have this kind of table setting—everything is white,” Sodamin says, pointing to the Pinnacle Grill’s ornate blue and white china with amber accents.

Sodamin sits down to talk about his job overseeing culinary experiences for Holland America Line, including at the restaurants on board the cruise line’s newest ship:  Rotterdam. In addition to the Pinnacle Grill, they include the Italian-inspired Canaletto, Asian-inspired Tamarind and his namesake brasserie Rudi’s Sel de Mer as well as The Dining Room, the Lido Market and others. 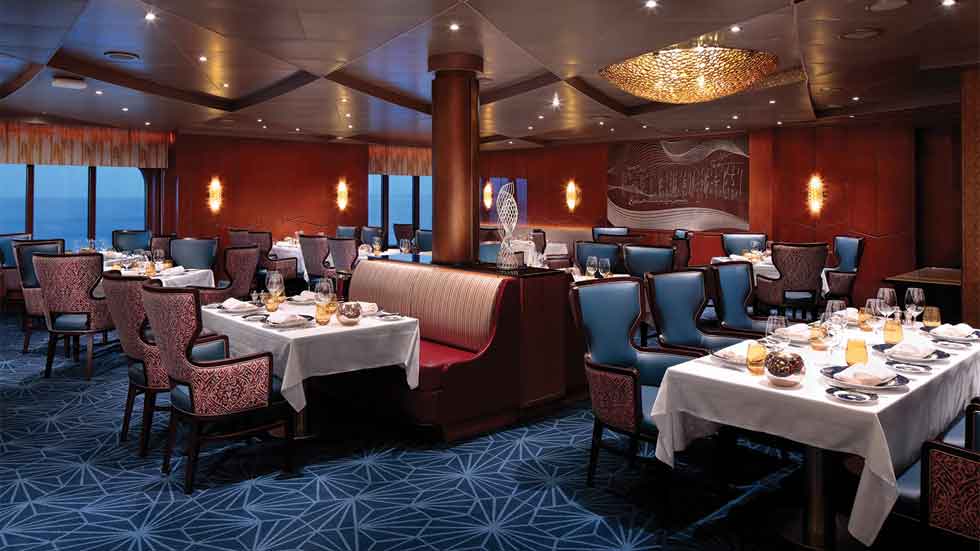 Pinnacle Grill is a sophisticated steakhouse at sea where the finest USDA Prime steaks are paired with award-winning wines; Photo courtesy of Holland America Line

Sodamin is meticulous about the dining experiences on the Rotterdam, alert to even a hint of a flaw. “Some people have a misconception about the quality of cruise line cuisine,” he says, “And they’re totally wrong because my middle name is ‘quality.’ Our food on board this ship is among the best on any ship.”

Sodamin’s efforts have long been recognized by the industry, including most recently by TravelAge West, which honored Holland America Line with the 2020 WAVE Award for Best Onboard Dining. 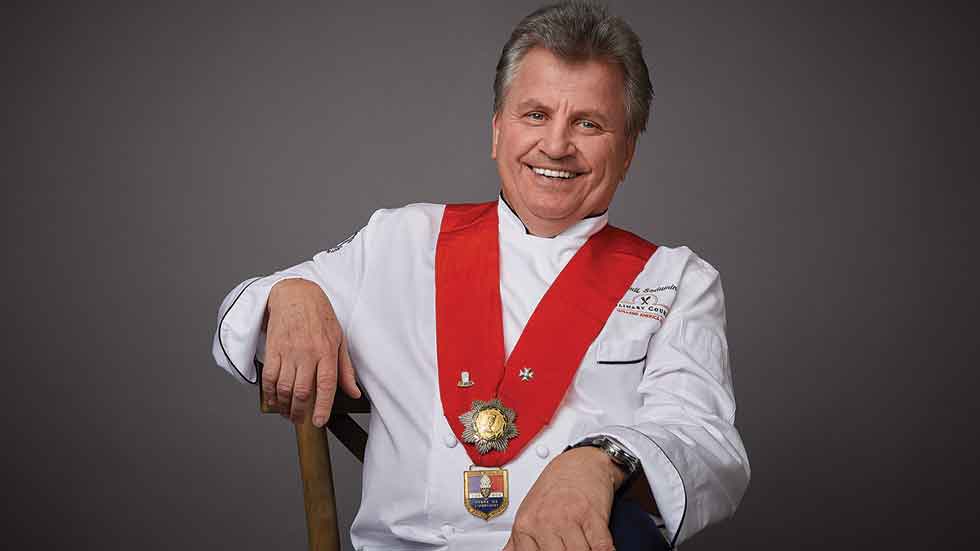 The master chef’s experience and passion make him a valuable player in the cruise industry. At age 26, he was named corporate executive chef aboard the legendary Queen Elizabeth 2, making him the youngest chef at sea to attain that title. More recently, he instituted Holland America Line’s Culinary Council and spearheaded its Culinary Art Center. He’s also led curriculum development at The Culinary Institute of America and launched a residential Culinary Training Center in Manila, Philippines.

President of Holland America Line Gus Antorcha attests that Sodamin’s passion has been critical to the cruise line’s success. “Guests consistently tell me Holland America Line has the best onboard culinary offerings in the business,” says Antorcha. “That’s thanks in no small part to Rudi’s enthusiasm and tireless attention to detail. He truly loves what he does, and he does it better than anybody.”

TRANSFORMING THE CULINARY EXPERIENCE
Sodamin has seen the cruise industry evolve over his decades of experience. In his early days, buffets were the primary meal option at sea. He recognized the amount of financial and food waste they created and noted with disappointment their suboptimal dining experience.

“A trip to the buffet was like a visit to the supermarket, with a station for meat, a station for pastry,” notes Sodamin. "I got away from the buffet line, and it was one of the best ideas I've ever had."

Sodamin has put considerable effort into elevating the menu at Holland America Line’s Lido Market and ensuring the presentation is appetizing, akin to a visual journey. Offerings now include more traditional fare as well as themed menus from different countries. 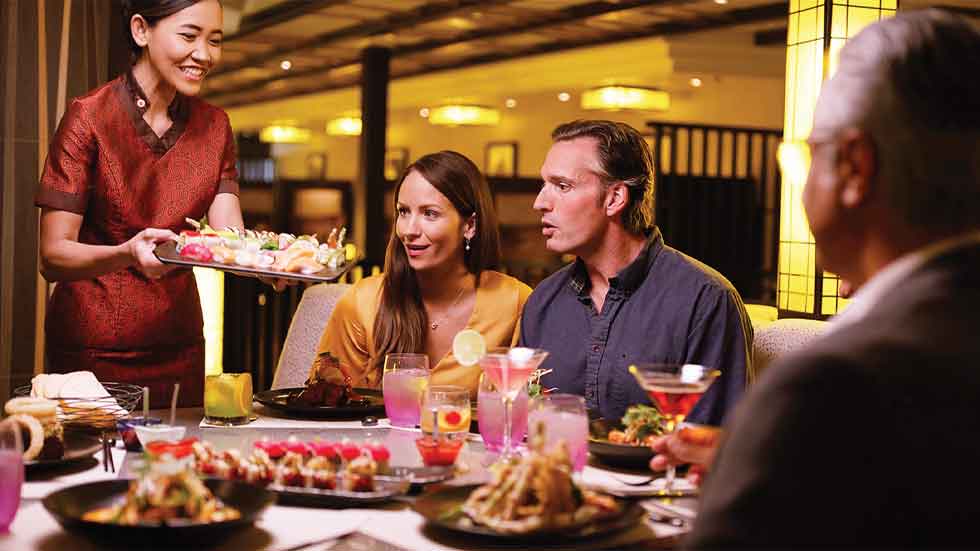 “Every time I see the presentation at the Lido Market, I have a smile on my face,” says Sodamin. “We’ve changed the perception of what we’re doing; we’ve made it futuristic.”

While the main dining rooms have long been the primary venue option on cruise ships, Sodamin has guided the expansion of specialty dining at Holland America Line. “I’m a little bit of a historian because you only learn from what you’ve done successfully,” he says.

To Sodamin, his namesake restaurant Rudi’s Sel de Mer was an obvious addition to the line’s specialty dining options.

While the specialty restaurant options may be especially tempting, Sodamin recommends frequenting The Dining Room as well, especially on formal nights. They’re perfect for those looking for a quiet, cozy evening, he points out. 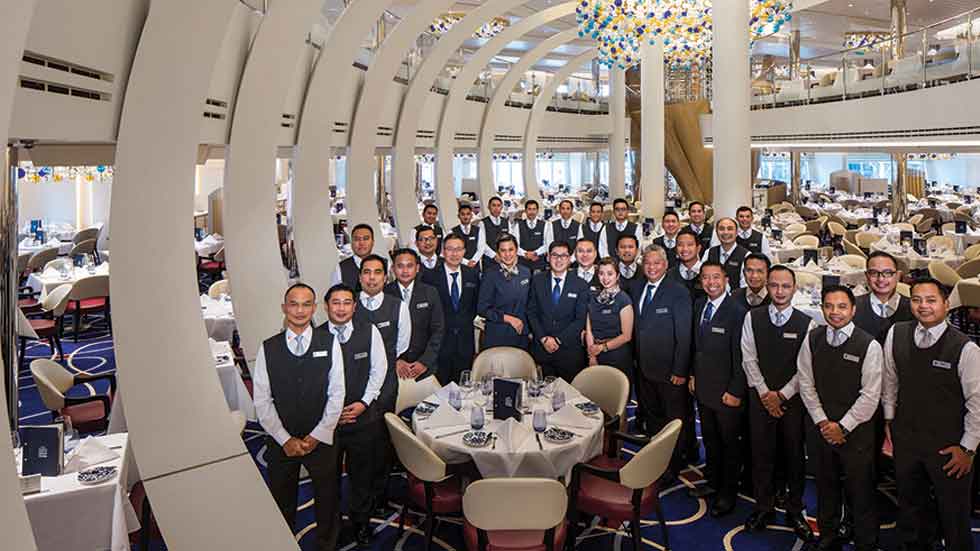 Staff of the The Main Dining Room aboard the Rotterdam; Photo courtesy of Holland America Line

Food quality and taste are, of course, essential factors, but presentation is also paramount for Sodamin. He photographs each dish he creates so that his chefs will plate meals to his high standards. “I’m a presentation freak,” says Sodamin. “I come in and photograph and take magazine-quality pictures, and I can sleep at night knowing it will be served this way.”

CREATING AN ENVIRONMENT FOR PROGRESS
Sodamin also takes pride in helping his team grow and evolve. “We work in a team approach with respect for one another,” he says. “We have the support and the team approach to do what needs to be done.”

It hasn’t always been easy, though. Thirty years ago, few women worked in cruise ship kitchens due to the logistical challenges of housing them in staff quarters. Sodamin converted onboard spaces to accommodate both men and women to promote diversity in kitchens at sea.

“I’m very proud to have brought the first woman [chef] into the kitchen,” says Sodamin, adding that women now make up 20 to 30 percent of the kitchen staff on cruise ships.

In return for the staff’s hard work, Sodamin offers his team of 200 to 300 cooks per ship the ability to exercise their creative freedom. “I give them freedom as a chef because you need that kind of passion,” says Sodamin. “Without it, the food will not be good.” 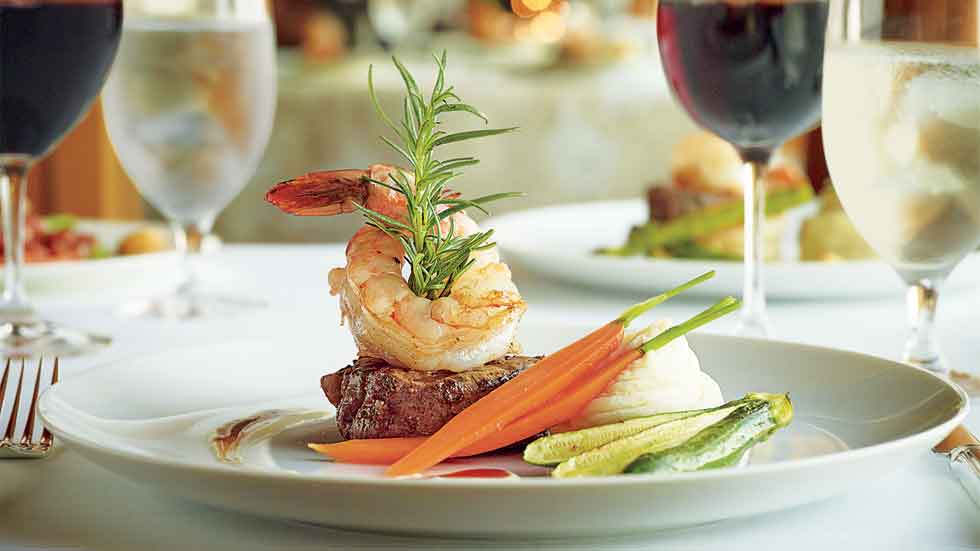 Surf and turk is among the popular menu offerings on board Rotterdam.

This mutual respect creates a strong bond within Sodamin’s team and results in a high staff-retention rate.

As Sodamin adds duties with sister cruise line Princess Cruises as its first Head of Culinary Arts, he sums up his passion and pride for leadership and cuisine in a few short words.

“It’s one of the toughest jobs in the world to be in the kitchen, but I have fun,” he says. “I’m proud I’ve made a million people happy over the years.” 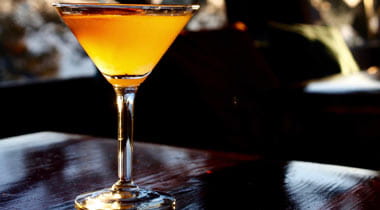 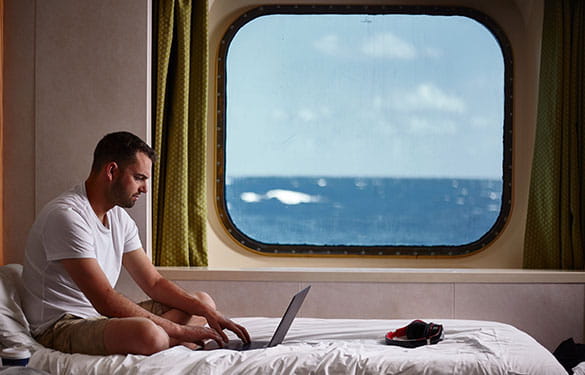 What You Should Know About Tipping Before Your Next Cruise

Interesting Foods to Try in Iceland