AAA Traveler Worldwise | Foodie Finds
EATING IT UP IN ITALY

With its romantic cities, natural wonders, ancient cultural monuments and, above all, exquisite cuisine, Italy consistently ranks among the top international tourism destinations, according to the U.N. World Tourism Organization. Its reputation for world-class cuisine has been immortalized in song, on film and in print (think Eat Pray Love, the film version of Elizabeth Gilbert’s best-selling novel in which the author noshed her way through the trattorias, pizzerias and gelaterias of Italy).

It’s true that one of the best ways to indulge in the history and culture of Italy is through its cuisine. Guests on Luxury Gold’s Ultimate Italy guided itinerary can do just that through hands-on classes, world-class dining experiences, private tastings and in-person meetings with culinary experts—opportunities not typically available to the average traveler.

FROM CHIANTI TO MACHIAVELLI
Among Italy’s most recognizable red wines, Chianti has been a mainstay of Tuscany for almost 800 years. Although it started as a pale white wine, it morphed over the years into a rich red wine. During that time, the region served as the backdrop for key events that shaped the history of Italy—and, indeed, the history of world literature.

During the late 1400s and early 1500s, the legendary statesman and political philosopher Niccolò Machiavelli lived off and on at Villa Machiavelli, his family’s estate in San Casciano. Comprising acres and acres of olive groves and vineyards, the estate produced olive oils and wines that were sold to merchants and aristocrats in Florence. During his first stint at the estate, Machiavelli wrote his iconic masterwork The Prince, which was most likely inspired by the raucous knights, travelers and pilgrims he mingled with at l’Albergaccio, the estate’s lively on-site tavern. Machiavelli would discreetly sneak into the tavern via a secret tunnel that connected it to the estate’s below-ground wine cellar—because a man of his status and reputation would not want to be seen openly entering such a den of vice.

Luxury Gold guests take a trip back in time when they visit the cellar, which looks exactly as it did back in Machiavelli’s day. As they sample today’s so-called super Tuscan wines, which Wine Enthusiast has called “among the most enthralling and diversified wines in Italy,” guests can easily imagine Machiavelli donning homespun clothes and slipping unnoticed into l’Albergaccio, where he would drink, play cards and carouse with the peasants, ruffians and paupers who shaped his view of the world as a place defined by scheming, cunning and manipulation. After the wine tasting, guests are treated to a farm-to-table lunch during which they’ll savor regional Tuscan specialties, including soppressata and finocchiona (Tuscan salamis), bruschetta with grana cheese and cream balsamic vinegar, and pappa al pomodoro (bread and tomato soup), while pondering how the modern world squares with Machiavelli’s dark Renaissance-era vision. 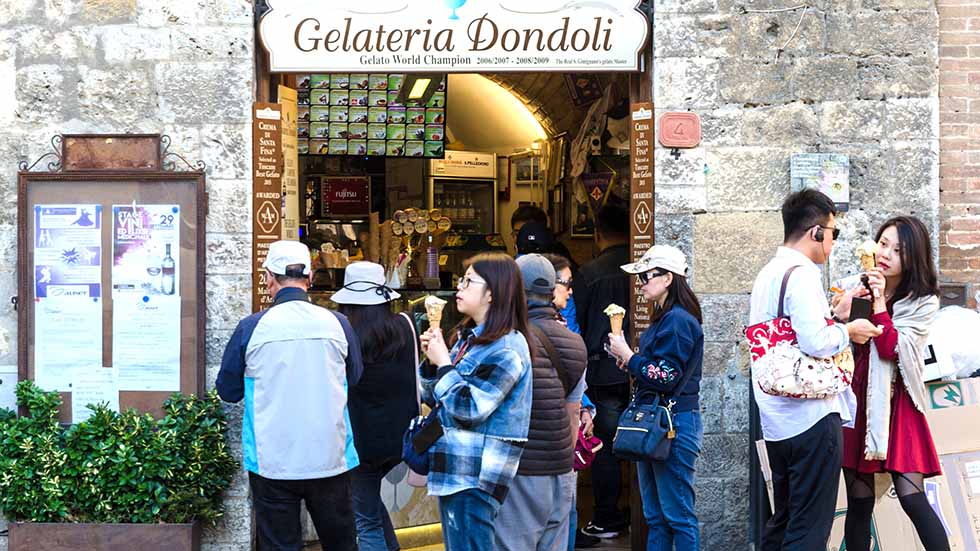 AMERICAN ICE CREAM IT’S NOT
It is thought that the modern history of gelato stretches almost as far back as that of Chianti. While no one may know exactly where this creamy, icy, oh-so-Italian delicacy was invented (Sicily is a strong contender), it’s known to have been a favorite at the court of Catherine de’ Medici in the mid-1500s.

Some 500 years later, its popularity continues. Italy is home to more than 37,000 gelaterias and even has a museum of gelato. Made with more ice, less air and less fat than American ice cream, gelato is known for its intense flavors, brilliant colors and fresh ingredients.

It’s perhaps not surprising that artisanal gelato—as opposed to mass-produced—is the most prevalent type in Italy, representing 55 percent of gelatos produced. One of the best-known artisanal shops is Gelateria Dondoli in the Tuscan town of San Gimignano, about an hour’s drive south of Florence. Unlike many other gelatieri, owner Sergio Dondoli does not come from a long line of gelato makers, but what he lacks in lineage he makes up for in creativity and quality. Luxury Gold guests visit Dondoli’s award-winning gelateria to meet with the gelato master and learn the difference between ice cream and gelato, and then they get to taste some of his amazing creations. There’s the classic sour cherry, the luscious Crema de’ Pazzi (bitter orange peel, Grand Marnier, dark chocolate and almonds), the unlikely Rosemary Baby (raspberry and rosemary) and more than two-dozen other flavors. Americans of a certain political persuasion might even want to try the Michelle (Avola almond with bitter orange peels, orange sauce, honey and saffron cantuccini), named for former First Lady Michelle Obama. 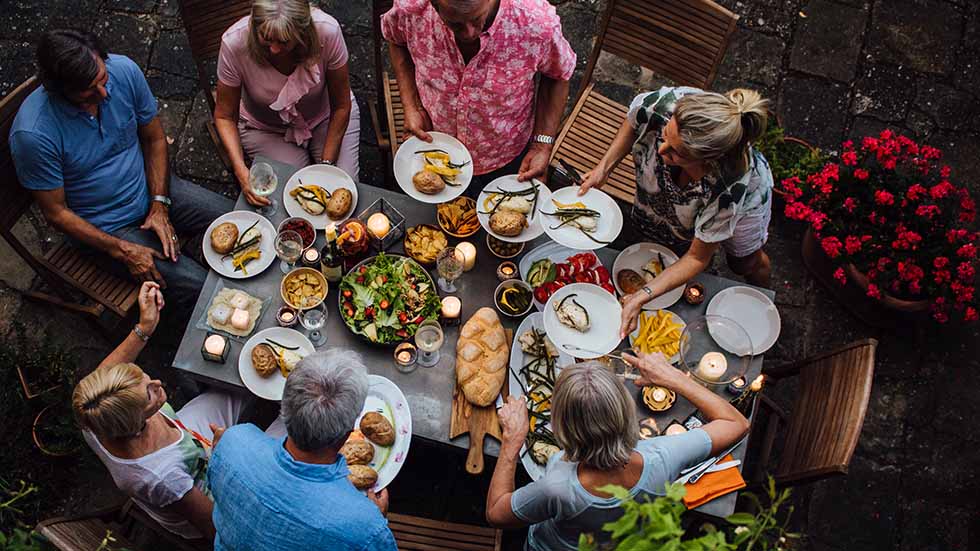 TASTES OF TUSCANY
Of course, Italy has many regional cuisines, but Tuscan food is among the most exciting. From fettunta (Florentine bruschetta) to castagnaccio (chestnut cake) to lampredotto (cow stomach), the area’s cuisine has evolved over the centuries from humble peasant food into a repertoire of relatively simple, fresh and flavorful dishes that make creative use of local vegetables, meats and oils.

To really understand Tuscan food, it helps to learn how to cook it. Luxury Gold guests have the pleasure of taking a hands-on cooking class at Villa Dianella, which dates back to the 16th century and was once used as a hunting lodge by the Medici family. Tucked in the town of Vinci (the hometown of artist Leonardo da Vinci), the villa’s expansive vegetable and herb gardens supply many of the organically grown ingredients that are used in the lesson, such as fresh basil and olives.

Guests tour the gardens before the class and then settle at workstations arranged along a long wooden table in the villa’s elegant great room. Provided with aprons, utensils and lots of local wine, they prepare a full meal under the guidance of a master chef. First, they make dessert, as tiramisu needs time to chill while the other items are cooked.

Guests then learn how to make pasta and fresh pesto from scratch, using Pecorino cheese and pine nuts plus basil, garlic and olive oil from the Villa Dianella estate. Next, they prepare a salad of fresh greens from the garden. Finally, they tackle panzanella (a traditional Tuscan salad of stale bread, tomatoes and olives) and mixed bruschetta. At the end of the lesson, guests try out their own culinary creations during a convivial lunch. Mangia!

REGIONAL FARE WITH FLAIR
Dining out in Italy is always an adventure, whether it’s at a small, family-run pizzeria or an internationally acclaimed five-star temple of haute cuisine. Italian chefs are passionate about their craft and their culinary creations, which reflect their personal history and heritage as well as the food traditions of their region of origin.

“I would define my cuisine as a walk through the territory in which I grew up, from the sea to the mountains through luxuriant gardens, among memories of life and experience,” says chef Salvatore La Ragione, executive chef at Mammà, a Michelin-starred restaurant on the famed island of Capri.

A native of the greater Naples area—just across the bay from Capri—La Ragione draws inspiration for his cooking from the local seafood and vegetables of the region, classifying his methods as “essential cooking with local products.”

Dishes combine the freshest ingredients and brightest flavors into mini-masterpieces of Mediterranean cuisine. Freshness is taken so seriously at Mammà that the restaurant does not have any cold storage or freezers; nearly everything is brought in the day it is served, bought from Caprese fishermen and farmers from nearby Anacapri.

The result is standout fish dishes such as the flag fish au gratin with puttanesca sauce; ravioli filled with prawns, provola cheese and porcini mushrooms; squid, rockfish and shellfish soup; and grilled octopus with zucchini, Jerusalem artichoke and broccoli. Non-seafood items are also on the menu, such as the roast suckling pig with fresh tomato chutney, bittersweet shallots and caramelized pineapple, or the beef carpaccio with Taburno truffles, dried tomatoes and fresh oregano. The menu is always changing, which means diners will be pleasantly surprised when they arrive.

Dining at Mammà is an intense sensory experience—and not just because of the food; located near the main square, high up in the center of the island, the restaurant affords sweeping views of picturesque Capri and the shimmering azure sea that surrounds it. Furnished in delicate shades of white and blue that evoke the ever-present ocean, the restaurant offers a memorable dining experience, one of many that Luxury Gold guests have on their culinary tour of Italy.

Where the Pros Go: Cambodia

Going with the Flow
See all Traveler Worldwise Articles