You’ll find them scattered along the roadside like ghosts appearing out of the mists of time: lonely motels with their windows boarded up and abandoned curio shops with their parking lots filled with knee-high weeds. Curiously enough, these relics often sit just down the road from vintage motor courts with their neon “NO Vacancy” signs glowing in the twilight and bustling trading posts where kids spill out the front doors begging their parents to p-l-e-a-s-e buy them that genuine rubber tomahawk they saw inside. It’s this juxtaposition—between businesses that have seen better days and ones that remain as vibrantly alive as they were during their mid-20th-century heyday—that is the essence of Route 66 today and what makes traveling this road, dubbed the Main Street of America, so interesting.

A treasure-trove of must-see sights and offbeat attractions awaits along the 2,400-odd-mile swath of Route 66 that cuts across eight states—places where you can still get a sense of what the old road is all about. Since few people have the time to travel the length of this famous route from its humble beginnings in downtown Chicago to its glorious end at Los Angeles’ fabled Santa Monica Pier, we’ve broken it up into state-by-state sections that should ideally fit into a one- or two-week driving vacation.

Simple, right? Well, yes and no. While several states are zealous about putting up “Historic Route 66” road signs to direct you, others are not. So picking up one of the many detailed Route 66 guidebooks on the market would be wise. Also keep in mind that the following listings should be considered high points; a more exhaustive rundown could be a book in itself.

With all that said, here’s AAA Traveler Worldwise’s guide to getting your kicks on Route 66.

ILLINOIS
While you can start your journey in downtown Chicago, it’s better to skip the traffic hassles and head directly for the good stuff waiting for you in the state’s cornfield-filled heartland.

Funks Grove, Shirley—The Funk family has been making maple “sirup” (syrup without sugar) since 1891. You’ll want to pick up a bottle.

Cozy Dog Drive In, Springfield—While the Lincoln Presidential Library and Museum may be this town’s claim to fame, that venerable institution has nothing on this otherwise ordinary diner that first created the corn dog.

Chain of Rocks Bridge, Madison—Once a major landmark along Route 66, today, you can walk or bike your way across the Mississippi River on this historic mile-long bridge.

MISSOURI
The rolling foothills of the Ozarks provide a dramatic backdrop for Missouri’s many interesting Route 66 relics.

Meramec Caverns, Stanton—Never been in a cave before? This is a good introduction—once you get past the kitschy light show and piped-in music.

66 Drive-In Theatre, Carthage—Catching a double-feature at this old-school drive-in may be an anachronism, but it’s a fun anachronism.

Planning a trip? Check out the Member benefits you can get on travel. Get Details

KANSAS
Although a mere 13 miles of Route 66 cuts through southeast Kansas, the state’s residents are rightly proud of that short section because of its connection to a simpler time before the coming of the Interstates.

Cars on the Route, Galena—Tucked inside an old gas station (formerly 4 Women on the Route), this relatively new snack bar/gift shop celebrates Pixar’s Cars movies with movie-themed gifts and crafts for sale. Not to mention the life-size inspiration for the character Tow-Mater parked out front.

OKLAHOMA
Arguably, no state can lay claim to as many quirky Route 66 attractions as Oklahoma.

Ribbon Road, Miami and Afton—In 1919, road builders faced a dilemma: they could pave the section of Route 66 between these towns two-lanes-wide for half the distance or cover the whole stretch with one nine-foot-wide strip of asphalt. To see what they decided, stop in either town for directions to drive this unique civil-engineering oddity.

The Blue Whale, Catoosa—If Route 66 had a mascot, it would have to be Catoosa’s Blue Whale. Once part of a local swimming hole, it now sits beached like a cerulean giant, providing a fantastic photo op.

Round Barn, Arcadia—Built in 1898 to show up a bunch of doubters who said it couldn’t be done, the curved walls of this local landmark enclose a circular interior that became part barn, part community dance hall.

Pops, Arcadia —About a half-mile west of the round barn, this small-but-modern gas station/café stocks more than 500 different varieties of soda pop.

Oklahoma Route 66 Museum, Clinton—This repository in Clinton may well contain the best collection of Route 66 artifacts and memorabilia along the old road.

Sandhills Curiosity Shop, Erick—This birthplace of “King of the Road” crooner Roger Miller is home to equally tuneful shop owner Harley and his curious assortment of odds-and-ends. Play your cards right, and he may serenade you.

When you're ready to start planning your trip, our travel agents can help. Find An Agent 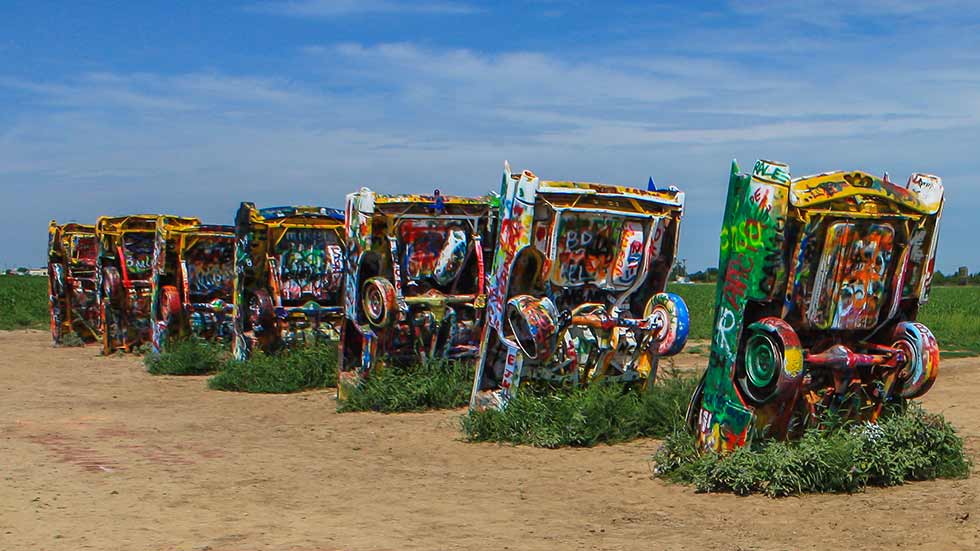 TEXAS
Cutting across the Texas Panhandle, Route 66 manages to pack a fair number of oddities into relatively few road miles.

Devil’s Rope, McClean—Only here will you find a museum dedicated to that Texas staple: barbed wire.

Leaning Water Tower, Groom—Unlike the Leaning Tower of Pisa, this quirky Groom attraction was built that way on purpose. Look for it on the north side of I-40 east of Amarillo.

Cadillac Ranch, Amarillo—What do you get when you bury 10 Caddys nose down in a Texas field west of town on the south side of I-40? An international tourist attraction, that’s what. Bring your own spray paint to add to the growing collection of graffiti on the cars.

Big Texan Steak Ranch, Amarillo—This Panhandle institution offers a free 72-ounce steak with all the trimmings—provided, of course, you can consume it all in under an hour. For a good laugh, read the guest book comments from people who’ve tried it.

Midpoint Café, Adrian—At the halfway point in Route 66’s long ramble between Chicago and LA, the food and homey atmosphere (not to mention the 36 kinds of pie) make this place a must-stop.

NEW MEXICO
From classic motels and gift shops to ancient native villages, the variety of New Mexico’s stretch of Route 66 is outdone only by its impressive scenery.

Tee Pee Curios, Tucumcari—The folks you left back home are going to expect you to come back with Route 66 tchotchkes. This venerable trading post has what you need.

Norman Petty Recording Studios, Clovis—Rock-and-roll legends such as Buddy Holly put this town on the map with hits recorded here, including “Peggy Sue.” Hours are by appointment only.

Acoma Pueblo, 50 miles east of Albuquerque—Perched atop a 350-foot sandstone mesa, this village dates to 1150 A.D., making it one of the oldest continuously inhabited communities in North America.

Ready to start planning? We can help. Find Out More

ARIZONA
While Arizona’s stretch of Route 66 has its share of natural wonders, it’s the man-made attractions that you’re likely to remember most.

Wigwam Motel, Holbrook—This is home to what may be the quintessential Route 66 attraction, where you can spend the night in an actual (concrete) teepee, complete with AC and cable TV.

Twin Arrows, Twin Arrows—One look and you’ll understand where this must-stop photo op gets its name (the two giant red-and-yellow arrows are leftovers from a long-gone café/trading post).

Seligman—Exiting the freeway here, drive west for one of the best-preserved segments of old Route 66. And be sure to stop for a snack at Seligman’s Snow Cap Drive-In, where the entertainment consists of the counter person’s practical jokes.

Hackberry General Store, Hackberry—This store is one of those oddball emporiums that made you want to travel Route 66 in the first place. Besides the cornucopia of old cars and classic signs outside, the store inside is chockfull of souvenirs. 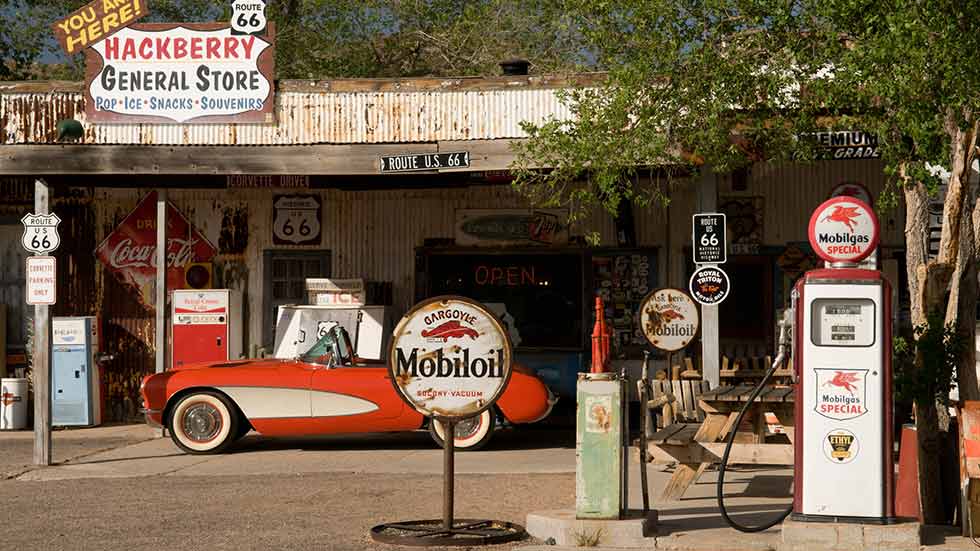 CALIFORNIA
Once you cross the Colorado River onto California’s portion of Route 66, you’ll encounter everything from wide-open desert to suburban sprawl as you make your way west to the road’s end at the Pacific Ocean.

Mojave National Preserve, west of Needles—If you’ve never been to the desert before, you’re likely to be surprised by the subtle beauty of its cinder cones, sand dunes and Joshua trees with their spiky arms raised to the sky as if in supplication.

Bagdad Café, Newberry Springs—This wide-place-in-the-road’s claim to fame, the café may be filled with fewer quirky characters than the 1987 German film of the same name, but it’s still an interesting pit stop that manages to serve upa great cheeseburger.

Santa Monica Pier, Los Angeles—All good things must come to an end. Here’s where Route 66 drops off into the ocean. Time it right, and you can wrap up your unforgettable journey with a memorable sunset.

Making Tracks to the Grand Canyon