Every year—okay, sometimes even twice a year—my family and I venture on a thousand-mile road trip from Philadelphia to Orlando to experience what’s new—and peek behind the construction privacy walls at what’s next—at our favorite Florida theme parks. After all, when it comes to the Theme Park Capital of the World, there’s no such thing as “been there, done that.”

That’s especially true this year as hammers swing, saws buzz, and cranes hoist during an unprecedented era of expansion and reinvention throughout Walt Disney World Resort and Universal Orlando Resort. In what appears to be a spirited game of one-upmanship, the parks are going big and bold with new immersive lands, over-the-top rides, posh hotels, inventive restaurants and more. But in this game, it’s theme-park visitors who come out the winners.

KEEPING UP WITH THE DISNEYS: WHAT’S NOW
If you haven’t done Walt Disney World lately, you haven’t entirely done Disney. And, really, who can say they have “done Disney,” considering the hundreds of attractions spread across the Magic Kingdom, Epcot, Disney’s Hollywood Studios and Disney’s Animal Kingdom parks? In the past year, Disney has unveiled a slew of attractions that have infused The Most Magical Place on Earth with more magic than you can shake a lightsaber at.

Headlining among them is Star Wars: Galaxy’s Edge, an all-new 14-acre land that debuted August 29 in Disney’s Hollywood Studios, marking the company’s largest and most technologically advanced single-themed land expansion ever. A Walt Disney Imagineering and Lucasfilm Ltd. collaboration, Galaxy’s Edge is home to the planet Batuu on the frontier of Wild Space, where you’ll find exotic characters, a colorful street market, unique eateries (try the blue milk at Oga’s Cantina) and two must-do rides. Millennium Falcon: Smugglers Run, which also opened August 29, is a starship flight simulator that welcomes you into the cockpit as a pilot, gunner, or flight engineer for a smuggling operation. Just opened December 5, Star Wars: Rise of the Resistance puts you aboard a full-size transport ship and into the hangar bay of a Star Destroyer for an epic battle between the First Order and the Resistance. 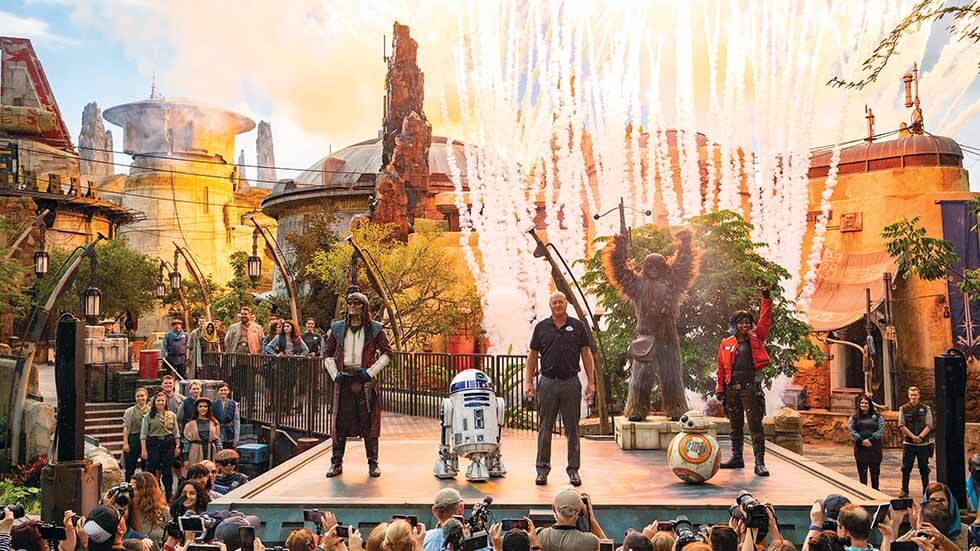 Enjoy flying in more traditional transportation at slower speeds? Hop aboard the complimentary Disney Skyliner, which began operating September 29. The aerial gondola takes guests gliding at about 11 miles per hour above the treetops in enclosed passenger cabins (albeit sans air-conditioning), each carrying up to 10 guests. The 300-cabin system, with about half of the cabins wrapped in whimsical Disney scenes, connects Disney’s Hollywood Studios with the International Gateway at Epcot as well as four hotels: Disney’s Art of Animation Resort, Disney’s Caribbean Beach Resort, Disney’s Pop Century Resort and Disney’s Riviera Resort. 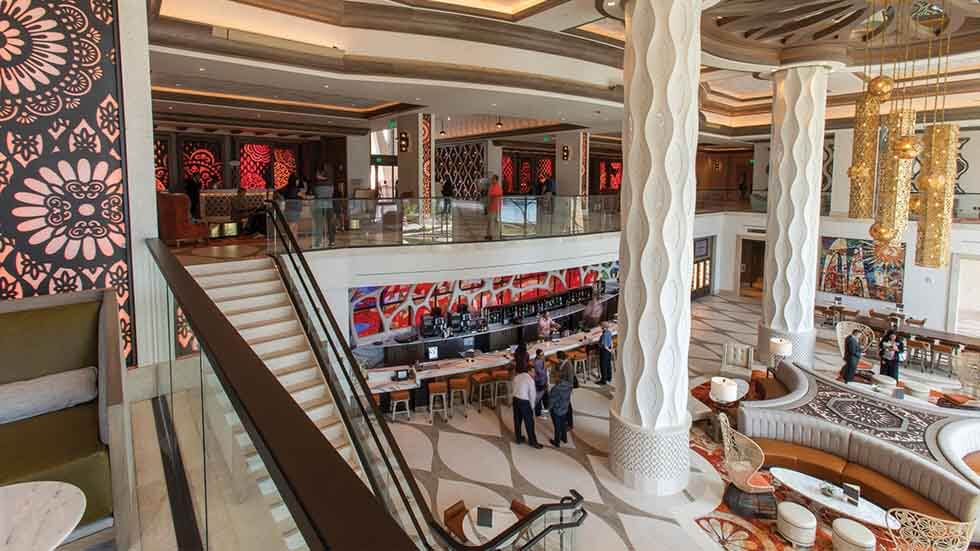 Also this past summer, Epcot said good-bye to the long-running Illuminations: Reflections of Earth nighttime spectacular, replacing it this past October 1 with a new show: Epcot Forever, a kaleidoscope of fireworks, lasers and glowing kites set to classic Disney songs and shown against the backdrop of the park’s World Showcase Lagoon.

Celebrating Disney World’s past, present and future, Epcot Forever, ironically, will enjoy a limited run into 2020. It will be replaced later in the year with the next—and Disney’s largest-ever—nighttime spectacular: HarmonioUS, a celebration of how the music of Disney inspires people around the globe. 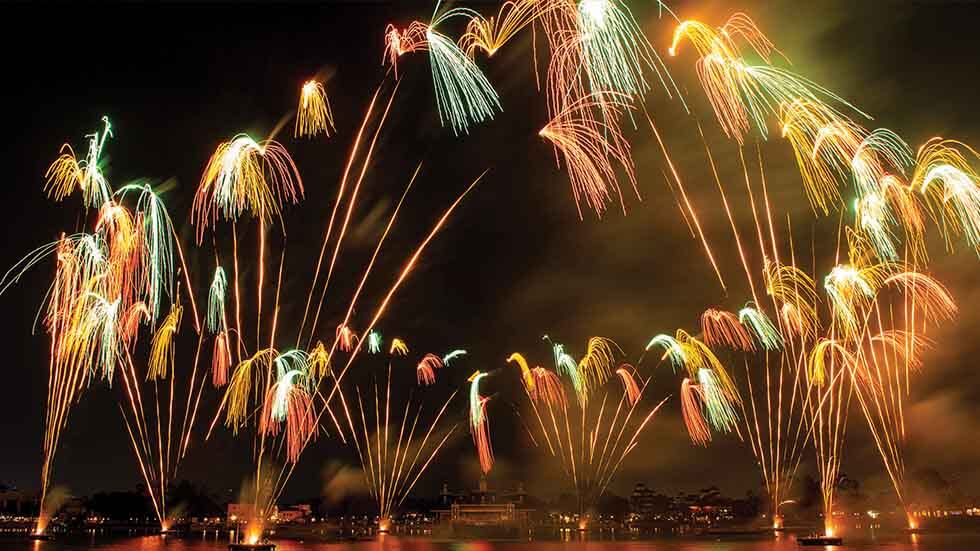 Other noteworthy developments include the March 31 unveiling of Lightning McQueen’s Racing Academy at Disney’s Hollywood Studios. This 10-minute show experience invites you to become part of the Cars films as you play the role of a rookie racecar driver with instruction from Lightning McQueen. As of August 12, sports fans can also find adrenaline-pumping action at Disney Springs’ NBA Experience, where you can immerse yourself in 13 basketball-themed activities in a high-tech atmosphere and learn about your favorite teams and star players. Little princesses and knights will want to check out the Bibbidi Bobbidi Boutique in Disney’s Grand Floridian Resort & Spa, its newest and third location, which opened on August 6.

Love Disney dining? You’ll love Takumi-Tei, an upscale table-service venue in Epcot’s Japan pavilion that served its first guests this past July, and, replacing the Liberty Inn, the Regal Eagle Smokehouse: Craft Drafts & Barbecue, a fast-casual venue in Epcot’s American Adventure pavilion, will soon swing open its doors. And opening this winter with an expansion of the Mission: SPACE pavilion, the Space 220 restaurant is designed as a space station, complete with daytime and nighttime views of Earth from 220 miles up.

DISNEY OUTDOES ITSELF: WHAT’S NEXT
As if all those developments weren’t enough, Disney World has more magic in the making as it gears up for its 50th anniversary on October 1, 2021, with a projected 18-month-long celebration spanning up to and after that date. New attractions throughout the resort will roll out in phases in 2020 and 2021. While the folks at Disney do a good job at keeping many details under wraps, they have revealed several big-picture projects.

When the long-awaited Mickey & Minnie’s Runaway Railway opens this spring in Disney’s Hollywood Studios, you can board a train helmed by Goofy and enter the cartoon world of Mickey and Minnie, where a wild adventure ensues.

Hollywood Studios will also expand Toy Story Land with the addition of a casual table-service restaurant: the Roundup Rodeo BBQ. Construction is progressing in the Magic Kingdom on TRON Lightcycle Power Run, a coaster-style ride featuring a train of two-wheeled Lightcycles that takes you for a thrilling ride through a digital realm; TRON is slated to open for Disney’s big 5-0.

But the most remarkable reimagineering is happening at Epcot, where the largest multiyear transformation of any Disney park in history is underway. Epcot will soon be reconfigured into four distinct neighborhoods:

World Discovery, World Celebration, World Nature and (the current) World Showcase. (Yes, that means the elimination of Future World to accommodate the three new neighborhoods.) Although significant, the transformation isn’t too hard to imagine thanks to the sneak-peek exhibits in Walt Disney Imagineering presents the Epcot Experience in the Odyssey Events Pavilion, which opened October 1.

Starring in World Discovery in 2021 is Guardians of the Galaxy: Cosmic Rewind, described as a “storytelling coaster” that rotates 360 degrees and boasts the first reverse launch on a Disney coaster. Also in the neighborhood and just in time for Disney’s golden anniversary, the PLAY! pavilion will offer a digital world of interactive games and activities; think water balloon fights with Huey, Louie and Dewey and fashion missions with The Incredibles’ Edna Mode.

In the new World Celebration neighborhood, Spaceship Earth (aka the golf ball) will remain but with new narration and a new musical score. A star’s throw from Spaceship Earth, a new stand-alone three-level pavilion, comprising a plaza, expo space and an elevated park, will serve as a prime venue for festivals and live events.

Moana is making her mark on the World Nature neighborhood with Journey of Water, Inspired by Moana, an exploration trail with playful “living” water. And starting this January, World Nature’s Land pavilion will show a new film on the fascinating story of planet Earth.

In the World Showcase, the France pavilion will get a big facelift and expansion. Debuting this January is a Beauty and the Beast Sing-Along, and this summer, expect Remy’s Ratatouille Adventure, a family-friendly trackless dark ride in which you’ll shrink to the size of the beloved rat Remy and race through Gusteau’s restaurant. The restaurant La Crêperie de Paris, featuring both table- and quick-service dining and a menu from celebrity chef Jérôme Bocuse, is also set to open this summer.

The World Showcase’s United Kingdom pavilion will tout a Mary Poppins-themed attraction that will take you strolling down Cherry Tree Lane, past Admiral Boom’s house, and into the home of the Banks family for some old-fashioned fun. New immersive films with spectacular scenery and engaging storylines will also be presented in the Canada pavilion and the China pavilion. In Disney Springs, Cirque du Soleil will entertain crowds with a new jaw-dropping show that celebrates Walt Disney Animation Studios; previews begin March 20, building up to the world premiere on April 17.

And while you’ll likely have to wait until 2021 or even later for Star Wars: Galactic Starcruiser, this revolutionary vacation experience is sure to be well worth the wait. This other-worldly hotel—designed as the Halcyon spaceship decked with window views of the galaxy—offers a two-night itinerary that, much like a cruise ship, begins when passengers are greeted in a terminal and then board the “ship” together to share in special activities (think operating the ship’s systems and testing your lightsaber skills), onboard dining, character interactions and a “spaceport” day in Star Wars: Galaxy’s Edge. Back on Earth, another on-property hotel is on the drawing board: Reflections, A Disney Lakeside Lodge, a 900-room deluxe resort on Bay Lake (between Disney’s Wilderness Resort and Disney’s Fort Wilderness Resort & Campground) that takes its inspiration from nature; look for a 2022 grand opening.

Helping you pull together all your plans, the Disney Genie app will go live later this year. This planning tool helps you customize your itineraries according to a range of categories—princesses, thrill seekers, foodies, family and more—with tailored recommendations for your ideal Disney day.

The Wizarding World of Harry Potter–Hogsmeade in Universal’s Islands of Adventure saw the June 13 opening of Hagrid’s Magical Creatures Motorbike Adventure, a coaster experience that takes you on a magical motorbike ride—up to 50 miles per hour—with Hagrid into the Forbidden Forest, where you’ll encounter curious creatures.
The resort has also been parading out new restaurants and hotels. In Universal’s CityWalk, Bigfire, an open-fire cooking restaurant, debuted in June to rave reviews, and based on the popular morning TV show, the TODAY Cafe made news in Universal Studios Florida when it opened on May 16 as the first of its kind. 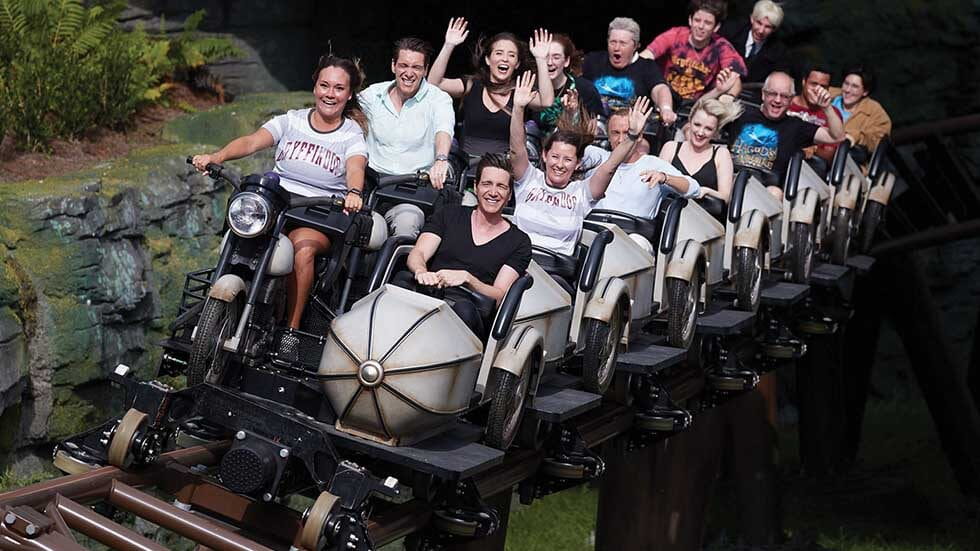 Located near Universal’s Volcano Bay waterpark, Universal’s Endless Summer Resort—Surfside Inn and Suites, the resort’s seventh hotel and first value-category hotel, opened June 27. With rates starting as low as $85 per night for a four-night stay (as of press time), the resort offers 750 guest rooms, including two-bedroom suites sleeping up to six; a surfboard-shaped zero-entry pool; and a casual food court. A sister property also in the value category, Universal’s Endless Summer Resort—Dockside Inn and Suites will welcome guests beginning March 2020. Also rolling out this spring in Universal Studios Florida is The Bourne Spectacular, an all-new stunt show based on the Bourne film franchise that follows the exploits of character Jason Bourne using live-action performers and high-tech effects in a merging of stage and cinema.

The blockbuster development, however, is the resort’s fourth theme park: Universal’s Epic Universe, part of a 750-acre site a few miles from the existing parks that doubles the resort’s size. The much-anticipated theme park, described as “a journey where beloved stories expand into vibrant lands,” will be joined by an entertainment center, hotels, shops, restaurants and more. While few details have been released to date, it’s rumored that the park will feature a Super Nintendo World, including a Mario Kart experience, similar to the land opening at Universal Studios Japan in 2020—but you didn’t hear this fan fiction from us.

With the flurry of activity unfolding in Walt Disney World and Universal Orlando, what could be left to do? How about, simply, go? We’re on our way, too!