AAA World | Central States
AN OASIS OF PARKS AND GARDENS AWAIT YOU ACROSS THE U.S.

The Pyramid. The Peabody. B.B. King. The King of Rock and Roll. There’s no doubt that Memphis, Tennessee, is rich in icons, but beyond the boisterous boîtes and bawdy blues of Beale Street, there hides an unexpected town of pastoral pleasures. Thanks to a jewel of a central city park, a historic cemetery, an under-the-radar estate and a surprisingly comprehensive botanic garden, Memphis offers a horticultural heritage comparable with more famous Southern garden cities such as Savannah, Charleston and New Orleans. As icing on the cake, a neighborhood garden walk, which celebrates its fifth anniversary this spring, is already one of the country’s largest, with more than 75 homeowners participating.

OLD FOREST ARBORETUM
A visitor to Bluff City can’t help but notice how green it is, from the parks that line the Mississippi River waterfront to the huge oak and elm trees that shade residential streets. But in the city’s main open space, Overton Park, the abundance of flora becomes clear. Within the park’s 342 acres, visitors encounter the city’s zoo, its museum of art and a series of formal gardens. They’ll also find the Old Forest Arboretum, an ecosystem that dates back more than 10,000 years and occupies nearly half the park. In the 1960s, Memphians—the omnipresence of the mighty river that nourishes all this greenery makes it’s hard not to slip and say “amphibians”—fought vigorously to keep these ancient oaks and hickories from being barreled over by a proposed interstate highway. 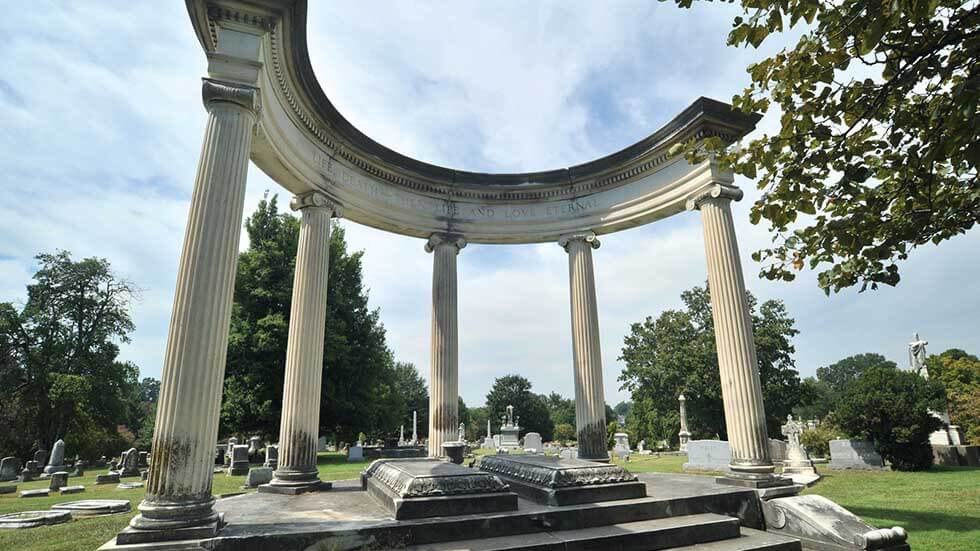 ELMWOOD CEMETERY
More than a century earlier, another group of like-minded citizens chipped in $500 each to establish Elmwood Cemetery. Although America’s great cities had long featured leafy squares, the idea of a public park wouldn’t take hold until the mid-1850s. A precursor, though, came about in grand cemeteries such as Elmwood, a response to a visceral need from the living for an antidote to rapid urbanization—and for the dead who lie crowded in small church graveyards.

“When Elmwood was created, this was the countryside, about two-and-a-half miles outside the city limits,” says Executive Director Kim Bearden. Today, the historically registered cemetery qualifies as an arboretum, with 90 different species of trees, including Southern staples such as crape myrtles, tupelos, and flowering dogwoods. Adding to the beauty of this setting, about 30 new trees are planted each year; volunteers have also begun planting in, and tending to, some of the cemetery’s hundreds of “cradles,” the bathtub-like enclosures that top Victorian-era graves. Those whose remains rest here run the gamut from the enslaved to captains of industry. “It’s a real patchwork quilt of Memphis,” says Bearden. 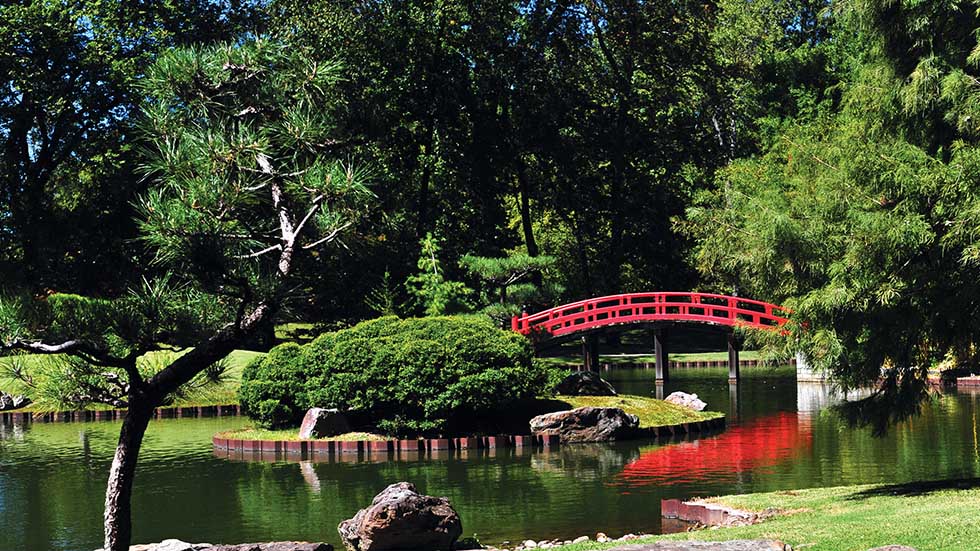 MEMPHIS BOTANIC GARDEN
For a more wide-ranging sampling of flora, the Memphis Botanic Garden offers a soupçon of greenery, including a wildflower woodland, an azalea trail, and a daffodil hill. Visitors should be sure to seek out the garden’s particularly strong collection of intoxicatingly fragrant Southern magnolias and its serene Japanese Garden, where the classic elements of the genre—a koi-stocked lake, a gently arched bridge, and moss-covered paths—are surrounded by a pleasing array of maples and pines.

AAA Travel Agents can help you plan your next adventure. Find an agent.

DIXON GALLERY AND GARDENS
Less than a five-minute walk down the road awaits the Dixon Gallery and Gardens, a masterful trifecta of art, interior design, and gardens. Primarily a fine art museum, this 17-acre campus also includes the gracious home of its founders, Hugo and Margaret Dixon. Influenced by Hugo’s heritage, the English-style gardens are arranged as a series of outdoor “rooms” that reveal themselves gradually. An abundant cutting garden—rich with roses, dahlias and phlox—provides arrangements to enliven the interior tableaus of paintings and antiques. A formal garden with classically inspired marble statuary such as Venus of Memphis and a woodland accented with a verdant ground cover of ferns, hellebore, and astilbe entice with more meditative pleasures.

Spring presents a fortuitous occasion to visit the Dixon as the biennial Memphis Flower Show. A competitive and educational event of the Memphis Garden Club, the show features a series of small design categories, such as photography and botanical art, as well as major horticultural exhibits. 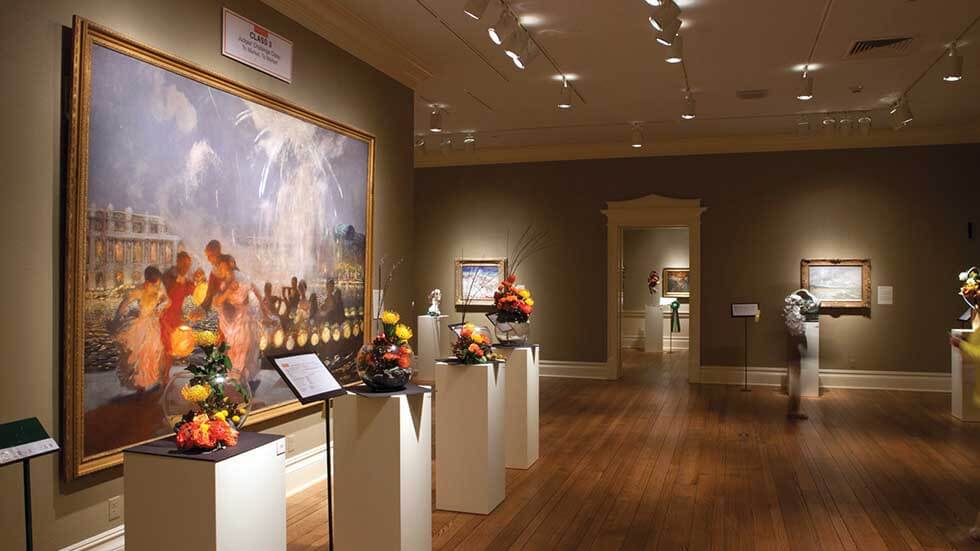 COOPER-YOUNG GARDEN WALK
After traveling twice to Buffalo, New York, to visit the nation’s largest tour of residential gardens, retired Memphis schoolteacher Kim Halyak experienced an epiphany. “When I saw the impact it made on the city, I was blown away. It was so exciting to see these neighborhoods, which reminded me of my own back home, come to life. So, I started picking the brains of the organizers in Buffalo.”

When she presented the idea to the members of her local garden club, 28 homeowners agreed to open their backyards to the public for the inaugural Cooper–Young Garden Walk.

During this annual event, gardeners show off the secret gardens of the pretty bungalows and shotgun houses that spill out from the intersection that gives the neighborhood its name. Old favorites will once again delight visitors, such as the garden of fire chief Gina Sweat, with its vintage fire seals and toy trucks filled with ferns, while newcomers, including the garden of Val Makarsky, a recent transplant from Virginia Beach, will be introduced.

Fees for the tour and a reception, benefit neighborhood beautification efforts and includes the opportunity to enjoy lectures and demonstrations related to the current year’s theme. To learn more, visit cooperyounggardenclub.org.

Whether you come for the blushing hues of pink and lilac that burst into bloom every spring in the Cooper–Young neighborhood or for the blaze of crimsons and golds that lights the specimen trees of Elmwood Cemetery each fall, you’ll find that Memphis ain’t just the blues; it’s ever green.

This article originally appeared in the March/April 2020 version of AAA World.

Discover Why Wichita Is An Unexpected Botanical Bonanza