Ever since I—like others during these pandemic times—found myself in sudden possession of a sewing machine, I’ve been strolling over to Philadelphia’s Fabric Row several times a week. The strip in Queen Village dates to the late 19th century when waves of Jewish immigrants settled in the tight area bounded by Third and Sixth Streets between Spruce and Christian Streets. About midpoint, Fourth Street served as a locus for the seamstresses, tailors and peddlers who lived here and sold their wares from hundreds of stationary pushcarts. Later, these enterprises coalesced and morphed into storefronts that clustered along just three blocks. 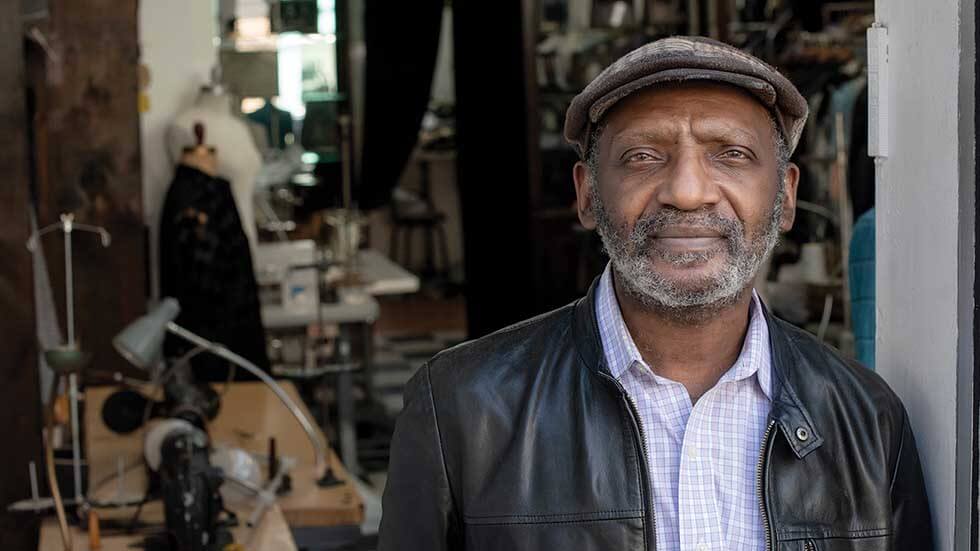 Larnell Baldwin and his company, Baldwin Fine Custom Tailoring, have been anchors of Philadelphia’s Fabric Row since the 1980s. Photo by Andrea Cipriani for the South Street Headhouse District


Places like Fourth Street—where a dozen legacy businesses still offer tailoring and upholstery services and proffer fabric, notions and wallpaper—are what drew my husband and me to this city when we were looking to relocate from New York City, where we were born, bred and schooled. Philadelphia’s walkability and density lured us, and we fell for its unusual mix of grit and gentility.

Thirty years later, the diverse streets of my Philadelphia continue to unravel before me with surprises and delights. Seemingly every corner I turn, no matter how many times I’ve done so before, reveals a collection of historic residential architecture that befits this “city of homes” or a tree canopy that rises to the occasion of its “green country town” moniker. There’s always an abundant window box to inspect, a piece of intricate ironwork to peer through, or a pocket park to rest in.

A five-minute walk from Fabric Row toward the Delaware River, I encounter many of these charms. Thanks to the good folks at Gloria Dei (Old Swedes) Church, the oldest extant brick building in town (erected in 1700), my dog can romp through grassy expanses off-leash (at least when National Park Service personnel aren’t looking). In the nearby alleys and side streets, tiny tilting houses and cool verdant courtyards beckon. On the 800-block of South Hancock Street, the vivid yellow doors on a trio of painted wooden houses seem untouched from the late 18th century. 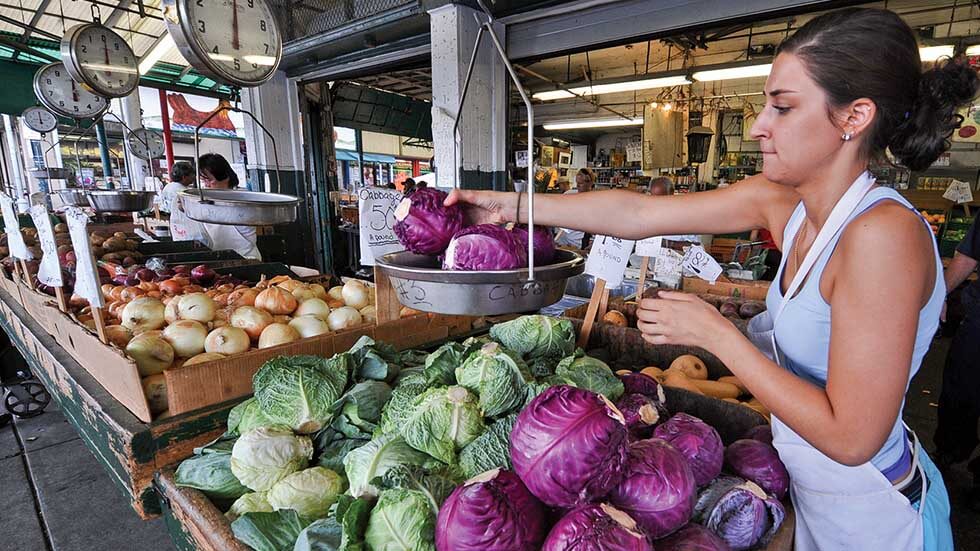 
If I walk west instead of east from my house, I quickly reach a similar district with a vastly different flavor. Like Fabric Row, the Italian Market was built on the buying and selling of goods. In this case, it was foodstuff. And while its roots also lie with an immigration population, this time it was the cheese-, fish-, and meat-mongers of Naples and Sicily, who came to seek America’s gold-paved streets.

The “Market,” as everyone refers to it, still resembles the place that newspaperman Christopher Morley described one hundred years ago. Shoppers “do not buy their food already prepared in cardboard boxes,” he wrote, going on to observe that the “vegetables and herbs are the most inscrutable.” Then, he marveled at chopped bay leaves, artichokes and mushrooms. 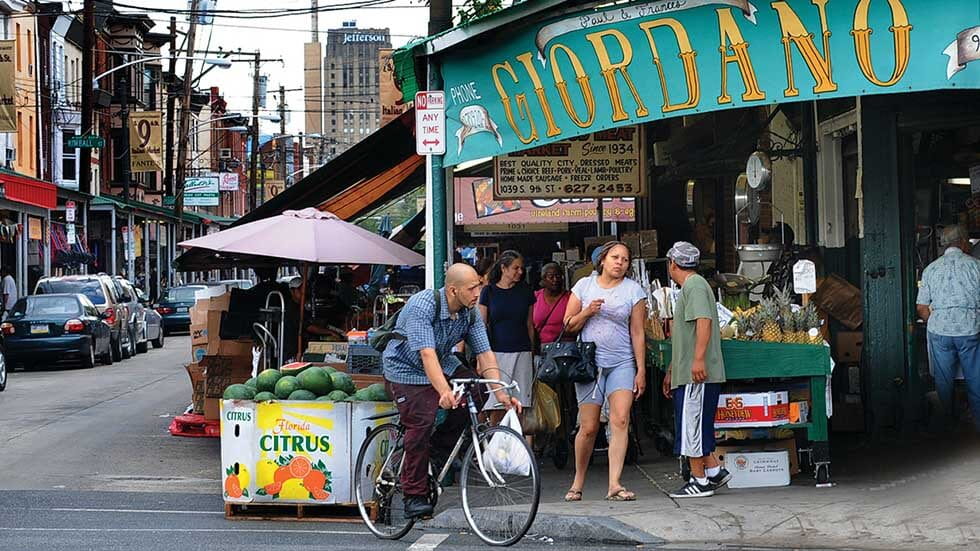 The iconic P&F Giordano stands at the heart of Philadelphia’s Italian Market at South 9th Street and Washington Avenue. Photo by R. Kennedy for GPTMC

Today, if I’m feeling enterprising, I can select Vietnamese sweet potato greens or Mexican tomatillos. Or, I can browse the handful of specialty shops—selling tortillas (a bag of 15 fresh off the conveyor belt costs but $1.50), French goodies (sweet housemade confitures and savory moutards), and Thai provisions (courtesy of the nationally lauded Kalaya restaurant)—that have joined old standbys such as Di Bruno Bros., Talluto’s and Isgro’s.

Like many Philadelphia neighborhoods, the area has its own cultural institution: Fleisher Art Memorial. I occasionally tour its galleries or take in a concert or troll a flea market at the adjacent statuary-filled Romanesque church that’s part of the complex. Samuel Fleisher established this tuition-free art school more than a century ago, dedicated to fostering the creativity of the children of the immigrants who worked in his woolen mills nearby. 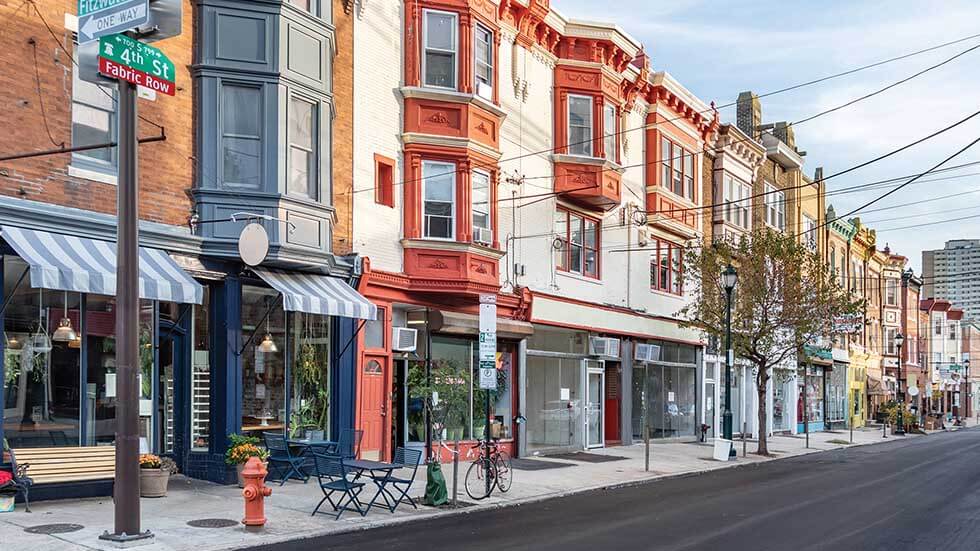 
I follow in the footsteps of these ambitious dreamers just about every day. Rummaging through the dollar remnant bin outside one Fabric Row emporium, I think of them. I think of them again as I feast on corned beef and potato salad at Famous 4th Street Delicatessen, which opened in 1923. And in between the fabric and the food, I’ll visit other, newer shops—a used bookstore with a penchant for art books and French comics; a hair salon where the lotions and potions are organic and the tresses expensively well-oiled; an expertly curated home goods shop that favors the artisanal, the natural and the minimal.

That seamless blend of the traditional and the trendy is the best part of the Market and the Row, really. Adept at honoring and preserving their past, they have gracefully glided into modernity. New generations have found homes here in Philadelphia, and they, too, are committed to staying. 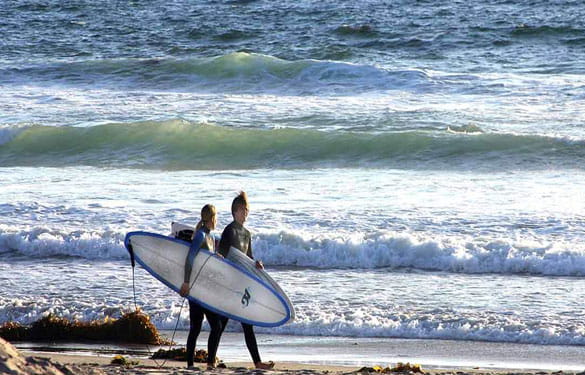