Take miles of rugged Pacific coastline and sandy beaches. Add swaying palms and a mild year-round climate that feels like the nicest springtime day you can remember. Then fold in a laid-back lifestyle that makes shorts and flip-flops de rigueur all day, every day. And there you have it: San Diego, a place that offers the best of California. 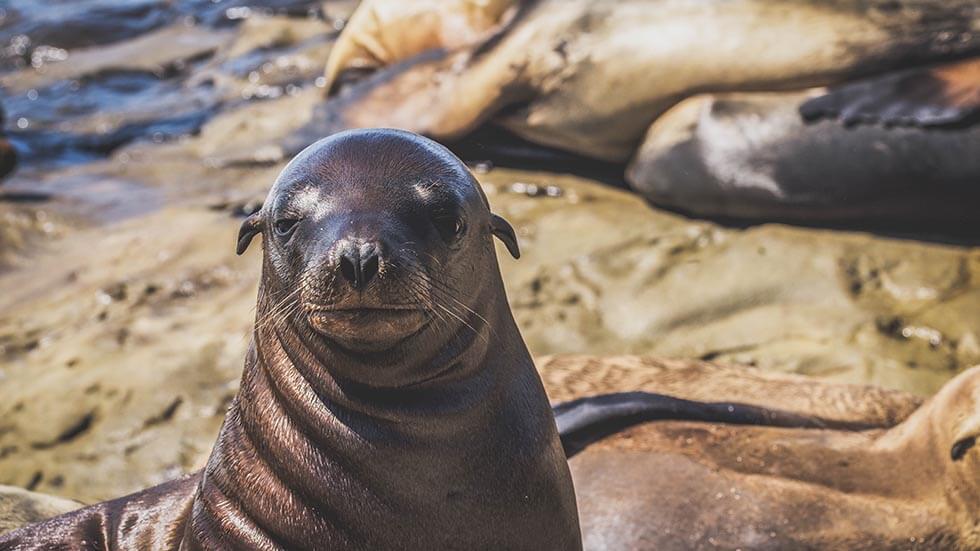 The main thing to keep in mind on your first trip to San Diego is that, despite it being the country’s eighth-largest city it’s more like a collection of distinct neighborhoods. From the sparkling downtown skyline on the shores of San Diego Bay to the chic village of La Jolla (pronounced “Lah Hoya”) north of the city, each neighborhood has its own personality.

Here, we share our favorite things to see and do in America’s Finest City.

With roughly 265 sunny days a year in San Diego, chances are you’ll have nice weather for your visit. (Note that low clouds, aka June Gloom, can roll into beach areas but often burn off by afternoon.) So, plan your visit to include lots of time in the great outdoors.


Head to the Mission Beach/Pacific Beach neighborhood. Here, you can rent a beach cruiser-style bike or a pair of inline skates from any of the countless area shops and roll along the oceanfront Mission Beach boardwalk. If that three-mile-long scene is not enough (or is too crowded for your tastes), take a short walk across Mission Beach’s main drag to another 14 miles of walking and bike paths that wind through Mission Bay Park in the shadow of SeaWorld.


To really get the San Diego vibe, though, try one of several local surf schools or rent a shorter boogie board to ride the waves closer to shore. For something more tranquil, consider kayaking with one of the many operators offering lessons on the waters of Mission Bay.


Ultimately, what you choose to do matters less than the fact that you get outside to do it. 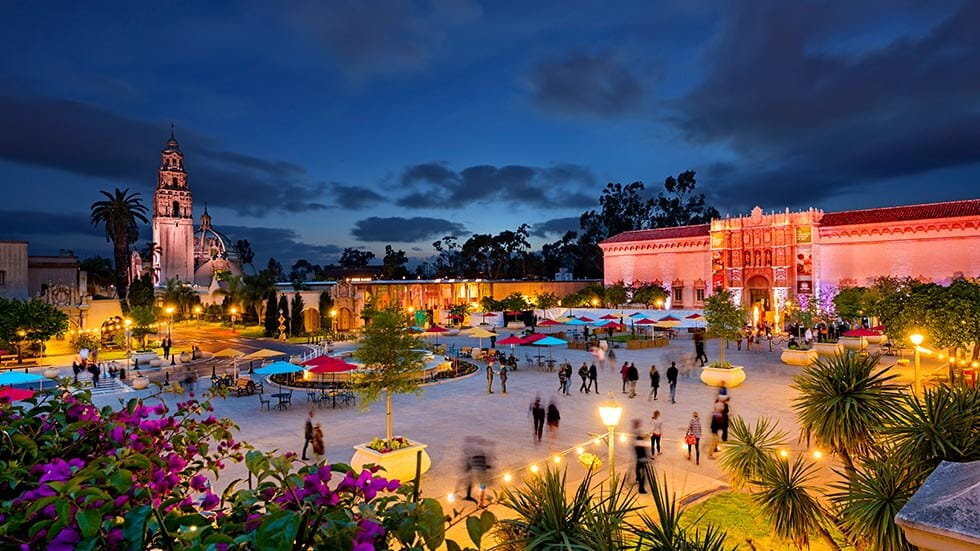 While San Diego is ruled by the automobile like the rest of Southern California, it’s possible to park your car and ride-hail your way to other interesting neighborhoods.

Nestled on San Diego Bay adjacent to downtown, the Embarcadero hosts the barque Star of India and the USS Midway aircraft carrier, both of which offer tours. The nearby complex known as Seaport Village makes a good midday interlude with its 13 restaurants and 50-plus small shops. 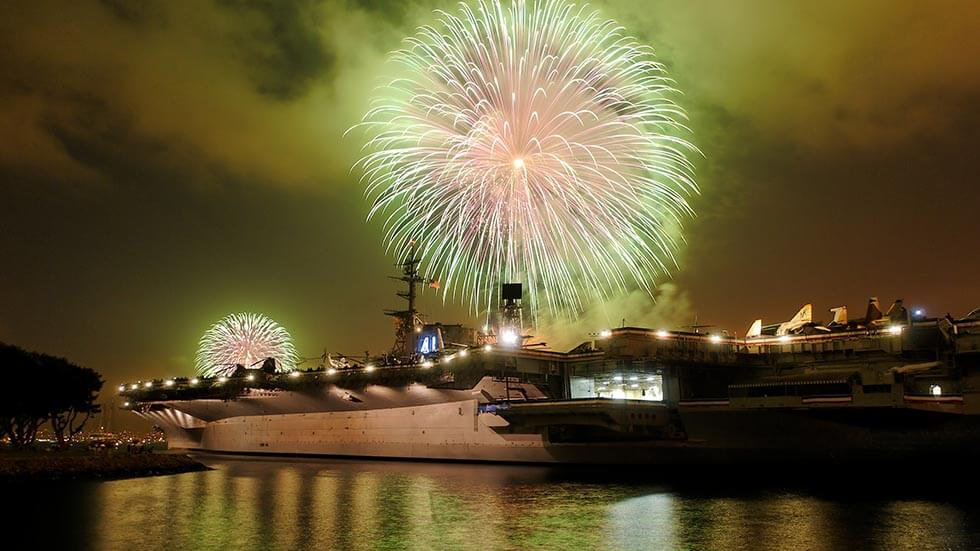 Just north of downtown, the 1,200-acre Balboa Park beckons with elaborate gardens and Spanish Renaissance architecture from the 1915 Panama–California Exposition. The ornate buildings now house a dozen-plus museums, making it a great place to explore on a rare rainy day. Within Balboa Park, the world-famous San Diego Zoo is home to more than 4,000 rare and endangered animals.


There’s also the postcard-perfect village of La Jolla, where you’re as likely to park next to a shiny Ferrari as a well-worn VW van with surfboards on its rooftop rack. The town’s main drags, Prospect Street and Girard Avenue, were designed for leisurely window shopping. Just a short walk from downtown, Ella Browning Scripps Park features several scenic natural coves, an underwater park made for snorkeling and the prettiest spot for a picnic you’re ever likely to find. 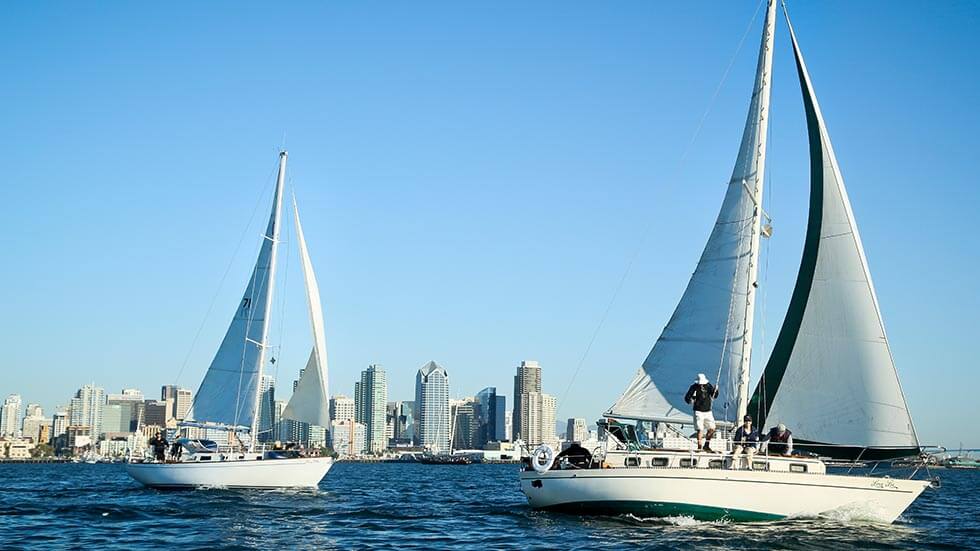 Spend some time on the water. Courtesy of San Diego Sailing Tours

San Diego is about having a good time, especially doing things you’ve always wanted to do but have never had the chance to.

Topping that list for airplane buffs is a scenic flight along this jaw-droppingly beautiful stretch of coastline in one of the vintage biplanes operated by San Diego Sky Tours. A “couples flight” will put you and your significant other in separate biplanes flying in close formation, an excursion sure to generate more than a few good memories.

One look at the tall masts bobbing in the harbor, and you’ll know this is a sailing town, too. To get out on the water, book a two-hour sail with San Diego Sailing Tours that will take you past aircraft carriers and nuclear submarines.

Ultimately, you may choose a different set of six words to describe your visit to San Diego, but there’s a good chance one of them is bound to be “wow!”