YOU CAN STILL GET YOUR KICKS ON ROUTE 66

No doubt about it, the most iconic road trip in America is traveling Route 66. While the 2,500-mile drive from Chicago, Illinois, to Santa Monica, California, can be daunting, the 300-mile stretch through Arizona offers a tantalizing taste of the classic Route 66 experience. The creation of the Interstate Highway System in the 1950s replaced much of the original Route 66 with I-40, but fortunately, surviving segments give road-trippers a sense of the pre-superhighway era.

The best way to travel through Arizona is from east to west, just as Oklahomans did in the 1930s when they passed this way to escape the Dust Bowl for the promised land of California. Start your trek in the far eastern section of the state by exploring the desert landscape at Petrified Forest National Park, which contains portions of the Painted Desert. You’ll want to stop for the night in Holbrook, where you can cruise along the main drag at dusk to view vintage neon signs as they flicker to life for the night, lending a spectral glow to the streetscape. Afterward, take in a film at the city’s circa-1954 Roxy Theater, the only still-operating movie theater along Route 66 in Arizona. Overnight at a vestige of mid-century travel—Wigwam Village Motel #6 on old Route 66. Built in 1950, the motel features 28-foot-tall fully furnished concrete teepees (despite the motel’s name, they are not wigwams), with classic cars permanently parked outside each one.

Those seeking more upscale accommodations will find them 30 miles west at the elegant La Posada Hotel in Winslow. Dating to 1930, the classic Southwestern building designed by famed American architect Mary Colter was restored to its former glory in the early 2000s. Today, it houses luxury rooms, a restaurant featuring contemporary Southwestern cuisine and an art gallery with rotating exhibits. 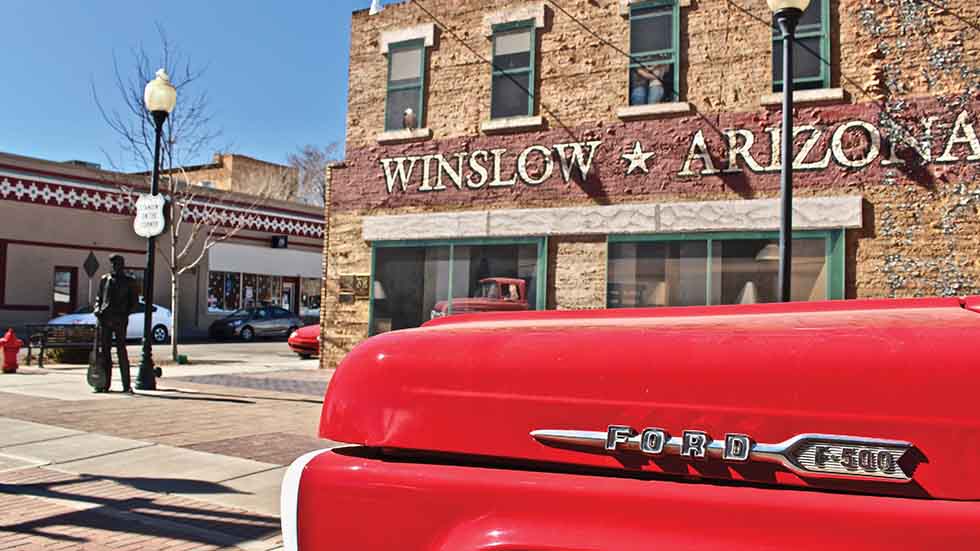 AZ Road Trip Such a fine sight to see The famous corner in Winslow Arizona, Photo by Lariss

A big draw for classic rock fans lies one block west of La Posada Hotel at Winslow’s Standin’ on the Corner Park. This intersection of Route 66 and North Kinsley Avenue commemorates the famous lyric “Well, I’m a standin’ on a corner in Winslow, Arizona” from the song “Take It Easy,” penned by Jackson Browne along with Glenn Frey of the Eagles. The pocket park features bronze statues representing an anonymous folk singer as well as Frey staring at the object of desire in the song: a 1960 flame-red “flatbed Ford” pickup truck.

Thirty-five miles west of Winslow, two 25-foot-long yellow arrows with scarlet arrowheads and feathers are angled into the desert ground, marking the ruins of the old Twin Arrows Trading Post. The graffiti-scarred buildings, abandoned in 1995, remain a poignant reminder of a landmark that had attracted generations of road-weary travelers for a gas fill-up and a hearty meal. 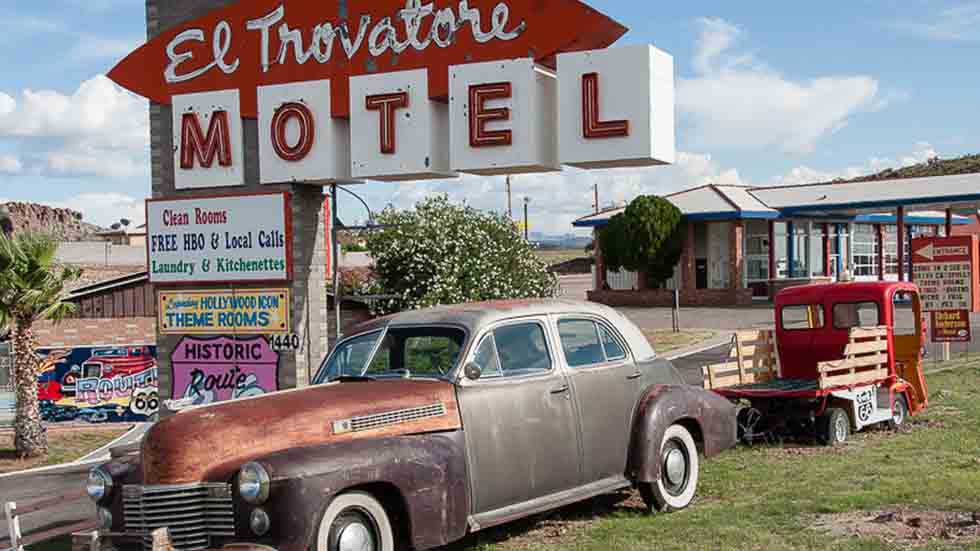 Marking the midpoint of the state’s expanse of Route 66 and nestled amid desert, mountains and forest, Flagstaff is a haven for hikers and winter sports enthusiasts. The turn-of-the-century buildings of the railroad town retain much the same appearance as when they were greeting mid-century road-trippers.

For a sample of local nightlife, two-step into The Museum Club, a lively log cabin honky-tonk showcasing live country music—Willie Nelson and Wanda Jackson have performed here—since the 1930s. With décor festooned with wagon wheels, animal trophy heads and Native American artifacts, the interior is so old-school that you’ll be forgiven for thinking you left your ’57 Studebaker out in the parking lot. 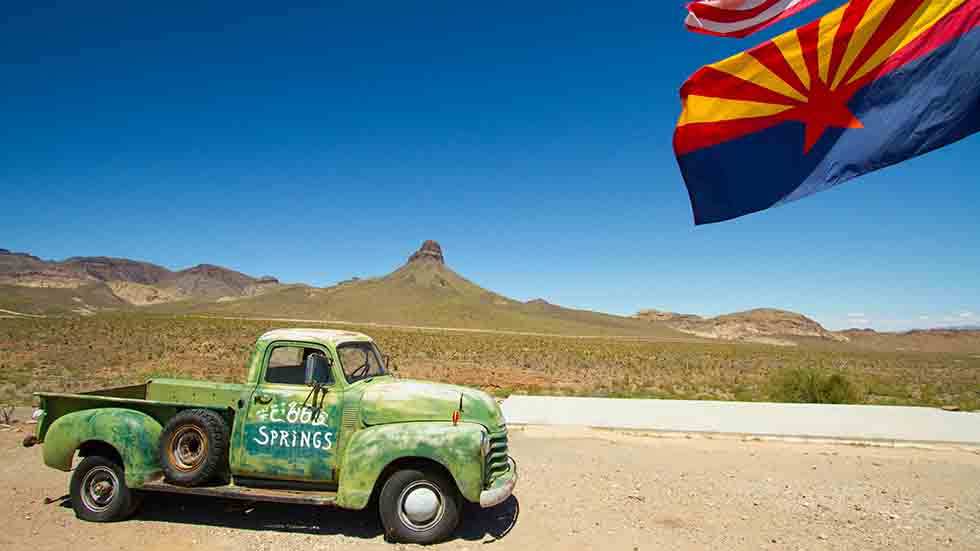 The next day brings a decision—travel west on Route 66 to Williams, also known as the Gateway to the Grand Canyon, or veer northwest up U.S. 180 and State Route 64 to the Grand Canyon directly. It’s hard to justify being this close to the Grand Canyon and not stopping for a look. Take the detour away from Route 66, have a gander at the giant hole in the ground, and then head south to pick up the Mother Road again in Williams.

We hope you’re hungry because the circa-1946 Rod’s Steak House in Williams is the perfect place to satisfy your appetite for Western fare. Look for the building with the large steer (outlined in neon, naturally) perched on top.

Twenty-four miles west of Williams, take historic Route 66 as it heads northwest of I-40. Here, the two-lane road winds through a land of windswept plains punctuated by stark rock formations piercing the sky. Stop in Seligman, perhaps the kitschiest town along the route, where souvenir stores such as Return to the 50’s and flashing neon signs of old-school motels celebrate the Old Road. Seligman was the model for the town of Radiator Springs in the Disney·Pixar Cars film. 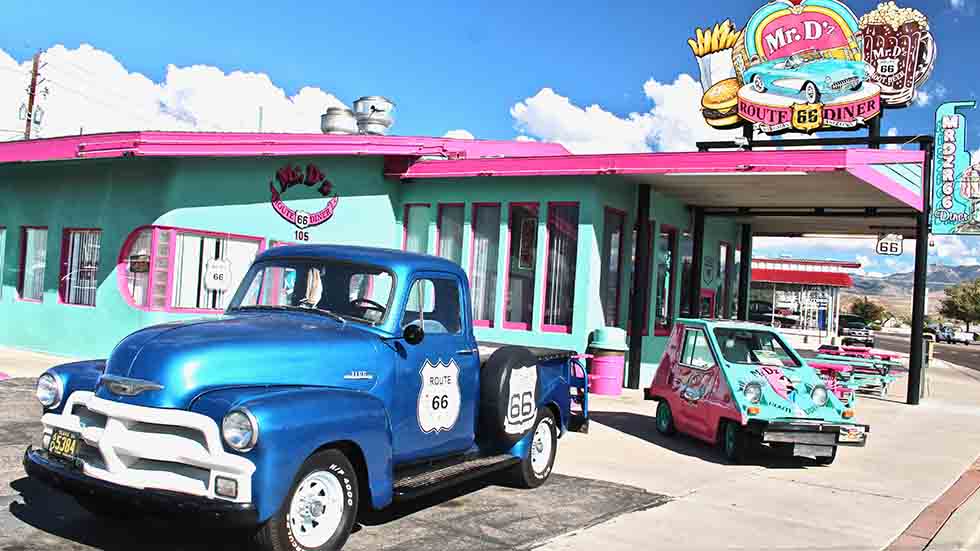 AZ Route 66 Near the end of the Mother Road in Arizona, Mr. D'z diner hugs Route 66 in Kingman. Photo by Michael Milne

End your Arizona Route 66 journey just 30 miles from the California border in Kingman, a.k.a. The Heart of Historic Route 66. The 1907 brick Powerhouse Building houses the Route 66 Museum and Route 66 Electric Vehicle Museum.

For one last touch of historic Route 66, stay in Kingman at the El Trovatore Motel, which has been welcoming guests since 1939. You can’t miss the motel’s neon sign soaring 100 feet in the air or the 200-foot-long Route 66 map (billed as the world’s longest) painted on the outside of the building. Travelers seeking a classic road-trip experience can still get their kicks on Route 66.

HOW TO FIND ROUTE 66
While some of the original Route 66 was covered over by Interstate 40, remnants of the original road snake around rock formations and canyons and through old towns bypassed by the modern highway. In fact, the sections of the route that pass directly through the towns often reveal more highlights from the old days than other expanses do. To find the original Route 66, we recommend the EZ66 Guide for Travelers by Jerry McClanahan. This spiral-bound book provides detailed drawings and descriptions of the multiple routes of historic Route 66 and calls out the points of interest along the way.