BEST REASONS TO VISIT WILMINGTON, DELAWARE, AND THE BRANDYWINE VALLEY THIS SUMMER AND FALL

Call me biased, but I think my hometown of Wilmington, Delaware, always merits a visit. It has mansions and gardens, a wide array of museums, a revitalized riverfront with a fun-filled beer garden, and state and county parks (Brandywine Creek State Park is my favorite for hiking, picnicking and tubing).

And let’s not forget its varied restaurants, including James Beard honorees Bardea, La Fia and House of William & Merry, as well as the speakeasies (I love the outdoor seating at Torbert Street Social), breweries and wineries.

This summer and fall, a convergence of major exhibitions and museum revamps makes a particularly compelling case for a trip to northern Delaware and the Brandywine Valley. So, gas up the car, and set your GPS for Wilmington.

WINTERTHUR AND JACQUELINE KENNEDY
Whether or not you’re old enough to remember the fanfare when First Lady Jacqueline Kennedy unveiled her White House redecoration project, you’ll likely be fascinated by the latest exhibition at Winterthur Museum in Winterthur, Delaware: Jacqueline Kennedy and Henry Francis du Pont: From Winterthur to the White House (on display through January 8, 2023).

I, for one, had no idea of the role that Winterthur, one of the region’s storied mansion museums, had played in that redesign. When the Kennedys moved to the White House in 1961, they encountered a home decorated in mass-produced furnishings with barely a historical piece in sight. The generic décor neither reflected the history of the country nor befitted the White House’s importance as a place to receive foreign dignitaries. Jacqueline Kennedy aimed to change that.

While her public statements never disparaged her predecessors, Kennedy was quite candid in private correspondence. She described the hallway leading to the ground-floor reception rooms as looking like a combination of a dentist office and bomb shelter, notes guest curator Elaine Rice Bachmann, coauthor (with James Archer Abbott) of Designing Camelot: The Kennedy White House Restoration and Its Legacy.

As Kennedy set about elevating the White House décor, she turned to Winterthur Museum founder H.F. du Pont, then perhaps the foremost scholar and collector of American antiques.

“The partnership between Kennedy and du Pont was at the heart of the story,” Bachmann says, adding that the wealthy octogenarian demonstrated to the First Lady that American antiques could be just as elegant as the French ones she was drawn to.

The exhibition opens with excerpts of Kennedy’s televised 1962 tour of the newly redesigned White House and introduces the First Lady and her goals for the project.

The following gallery details the transformation of the Red, Green and Blue State Rooms. A few choice furnishings, photos, fabric swatches and handwritten correspondence reveal the painstaking work—and sometimes the disagreements between designers and advisers—that went into the redecorating.

Also showcased are sketches and photos of the renovated family dining room and bedrooms, including those of toddler John F. Kennedy Jr. and his sister, Caroline. Poignantly, the Oval Office décor that President Kennedy himself had selected was being installed when he was assassinated in Dallas in 1963.

Complete your visit with a tour of Winterthur’s period rooms. Depending on the day, you’ll see either the fourth or fifth floor—the same two floors that the First Lady was shown on her visit in 1961—in the specially designed tour Walking in Jackie’s Footsteps.

LONGWOOD LIGHTS UP
As far as I’m concerned, you never need an excuse to visit Longwood Gardens in Kennett Square, Pennsylvania, one of the world’s legendary horticultural displays. In addition to lush gardens and magnificent fountains, the summer and early fall seasons bring the Illuminated Fountain Performances and live concerts in an outdoor theater.

This year, an exhibition by artist Bruce Munro infuses even more evening drama into the setting. Light: Installations by Bruce Munro (on display through October 30) scatters eight immersive large-scale works around the gardens to emphasize the healing possibilities of nature and art.

“When I was installing my last exhibition at Longwood 10 years ago, I observed a new lightness in visitors’ faces after they had spent time in the gardens,” Munro explains. “They had sort of shed the stresses of life, and that’s what a garden does. I feel the same about art. It can draw people away from their anxieties and stresses. It can strengthen and rebalance them.”

The whimsical Ramandu’s Table, for example, features 1,000 plastic flamingos wading in a waterfall-filled pond. Loosely inspired by a story in C.S. Lewis’ The Voyage of the Dawn Treader, Munro’s work illuminates the flamingos with lights that pulse slowly through the colors of dawn and dusk. Munro hopes the accompanying soundtrack of honking flamingos will elicit laughs.

ALL-NEW DELAWARE MUSEUM OF NATURE & SCIENCE
Late May saw the unveiling of a 17-month, $10.8 million overhaul of what was formerly known as the Delaware Museum of Natural History—located almost directly across a country road from Winterthur. The renovation took the interior down to its studs and rethought the mission of the museum so that it now addresses issues challenging our world today, particularly climate change.

“The take is no longer just: Here’s what we know. It’s, here’s why it matters. Here’s what you can do,” says Director of Communications Jennifer Acord.

HAGLEY MUSEUM: PATENTS AND PROGRESS
When all its contraptions are closed up, the “improved nursery lounge,” also described as an “invalid bedstead,” doesn’t look too different from an ordinary Victorian-era sofa. But, oh, the bells and whistles! Start opening drawers and compartments to find a bureau, a writing desk with shelves, a folding table, a mirror and even a chamber pot (or bedpan) with a wooden seat. Use it as an easy chair or a bed.

“It’s like the Swiss army knife of furniture,” says Chris Cascio, assistant curator of patent models at Hagley Museum and Library in Wilmington.

It’s one of the wackiest items I’ve ever seen at Hagley, and it’s part of Nation of Inventors, a new permanent exhibition set to debut later this summer.

The 120 patent models on view belong to Hagley’s collection of 5,000 pieces dating from the 1790s to the 1880s, when inventors no longer needed to submit a working scale model to the US Patent Office. While typically 12 inches square, some of the models are life-size, such as the numerous artificial limbs exhibited (much in demand following the Civil War).

The inventors include the well-known, such as Thomas Edison, who was awarded some 1,000 patents; John and Joseph Beam, of Jim Beam fame, who patented a method for distilling liquor; Madam C.J. Walker, creator of beauty products (recently profiled in the movie Self Made); and John Landis Mason, who devised a method for sealing jars to preserve food.

Other names are less familiar. Did you know that Melitta Bentz invented paper coffee filters in 1908 because she was tired of having grounds in her coffee? Or that Louis H. Latimer—the son of parents who escaped enslavement—improved on Edison’s light bulb by using a carbon filament instead of paper?

After trying your own hand at problem-solving and inventing, tour this former du Pont home and its gardens, along with the restored worker’s community and the historic gunpowder mills along the Brandywine River.

And now you know why I always find Greater Wilmington exciting. There’s always something new to see and do in my hometown. 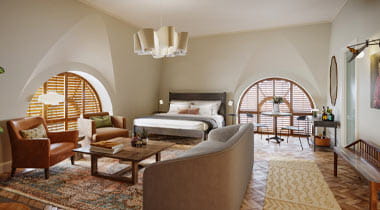